After bringing the Funco to NORRA the last few years which resulted in a 1st, 2nd, Spirit of NORRA Award, an X-Ray, MRI and Physical Therapy we were excited to bring our newly restored Chenowth 1000. This car was found in Texas as a complete time capsule and delivered to my uncle, Dave Tilton for a full restoration. For anyone interested in the history, This chassis was built in early 1977 and sold to Roy Martin, owner of General Parts in Dallas TX. Roy raced the car as a desert car until he sold it in 1981 to Joe Nelson. Joe with the help of friends made major updates to convert it to a short course car. Dave Tilton restored the car to how it was raced in 1982 with the only major difference being the new paint scheme which Rory Ward helped to design.

I usually have Jake Johnson share driving with me but this year he could not make it, so long time Chenowth driver, Dan Cornwell shared the driving. Our team also included our new engine builder, Phillip Drew, Dan's son, Erik Cornwell and Erik's wife Cointa. Dave Tilton was busy chasing of our teammate, Buddy Feldkamp in the 829 Challenger Truck.

On Friday Morning we were ready to leave the Feldkamp shop at the Redlands Airport. A little ways past TJ, we talked about how back in the day the racers would drive their cars to Ensenada on the highway. Then we came up with a pretty sketchy idea that would be very cool if we got away with it! Unfortunately we didn't quite get a way with it, but while it cost us a $100 the memory is priceless!!! 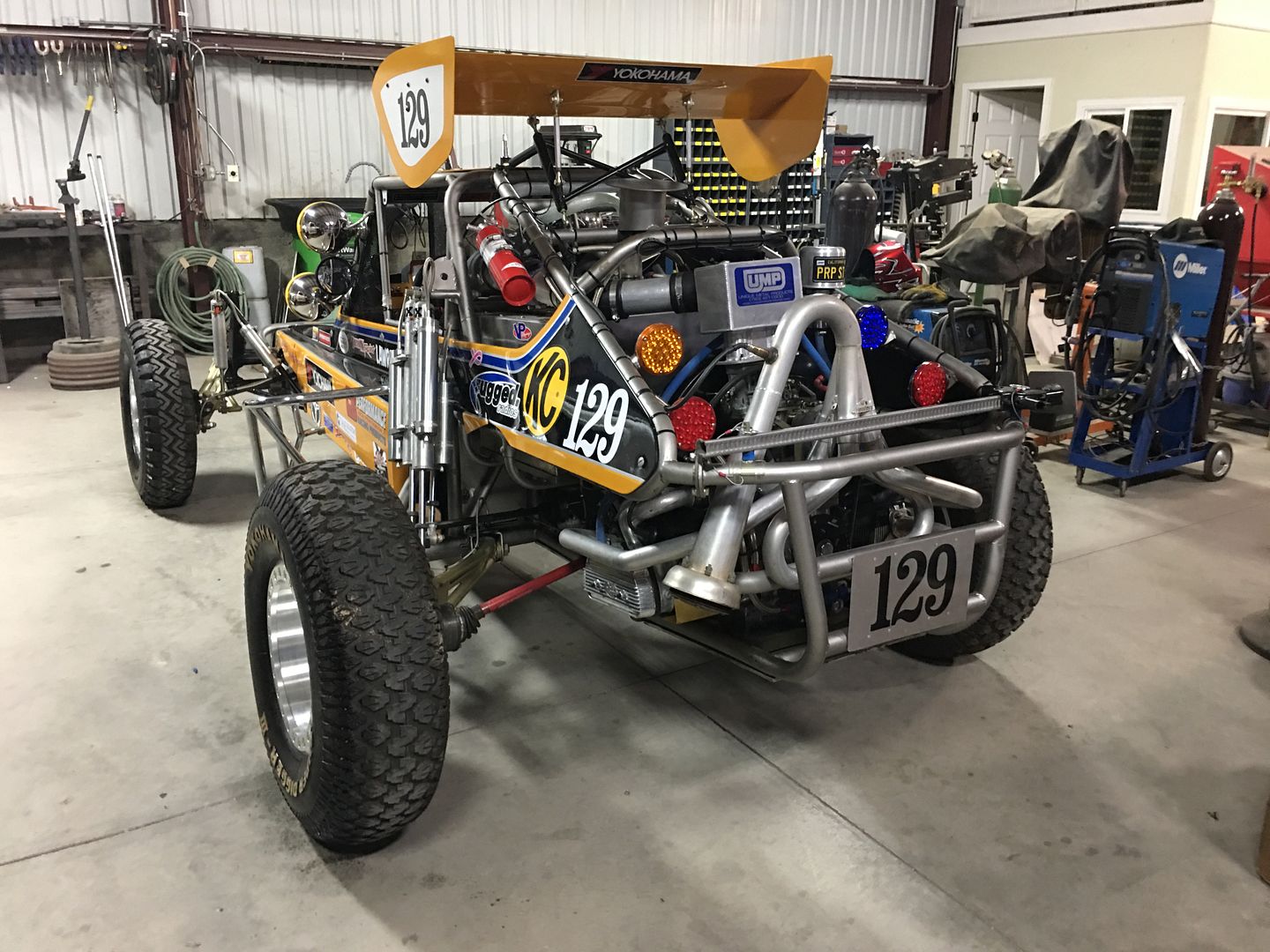 Ready to leave for Mexico! 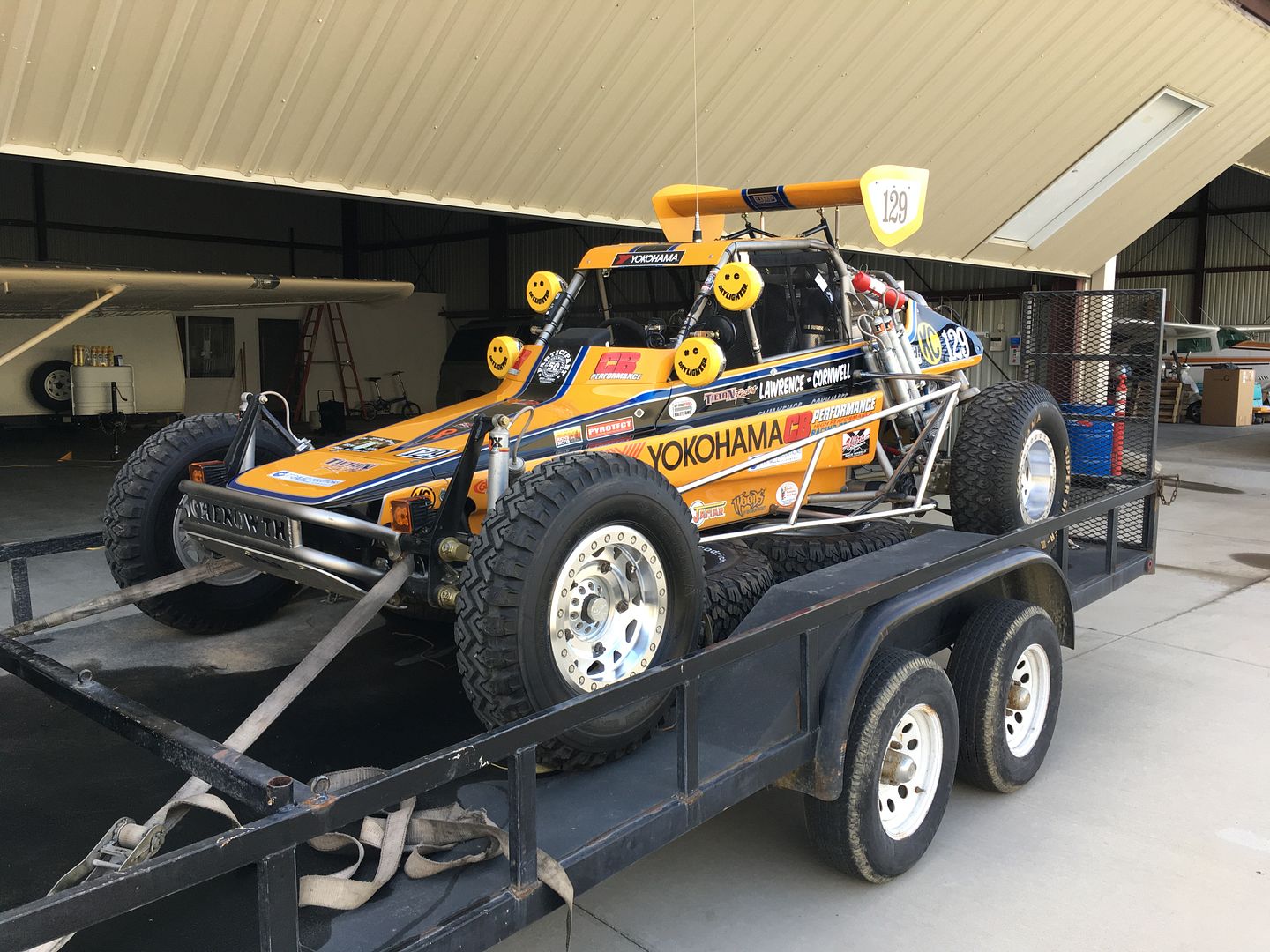 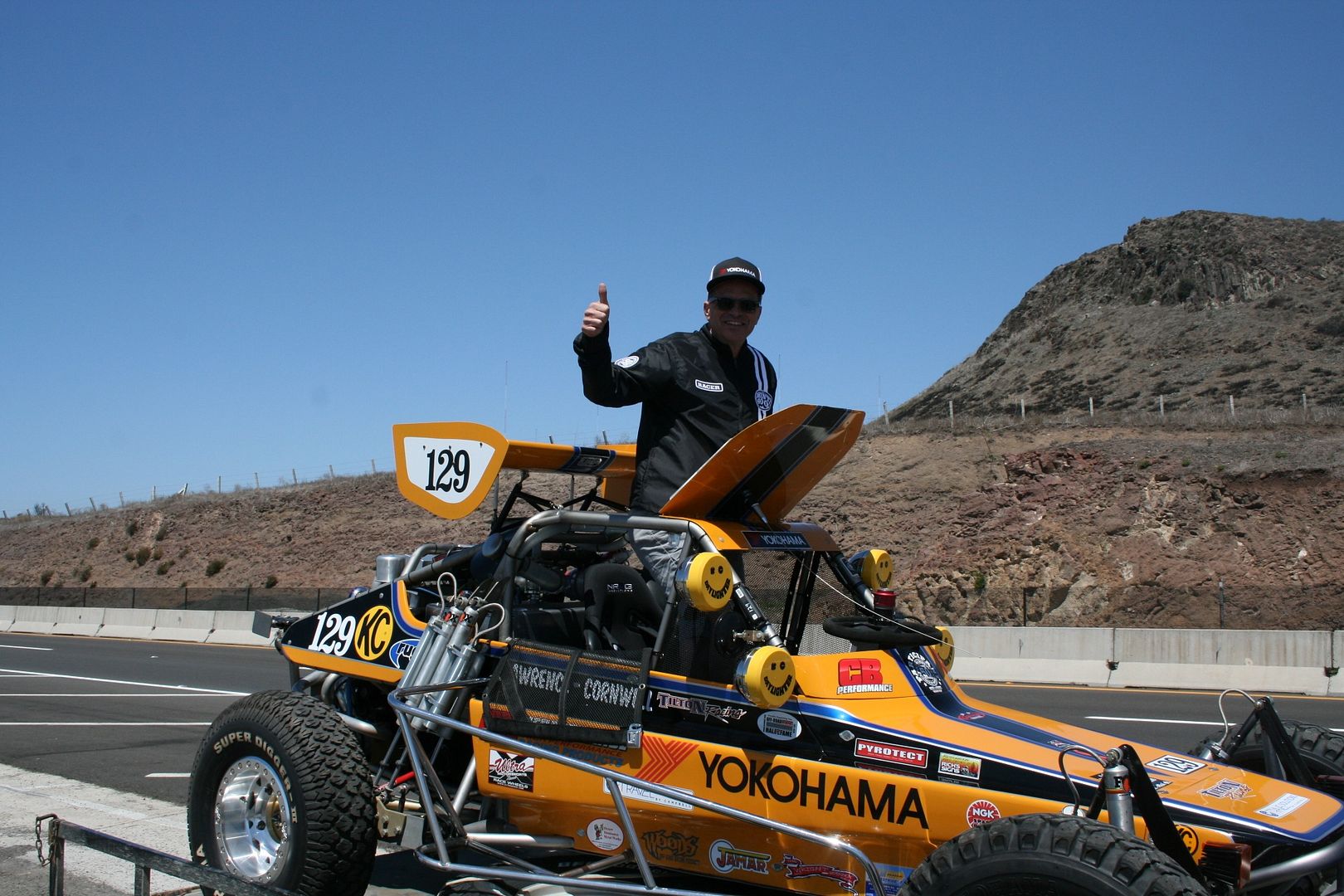 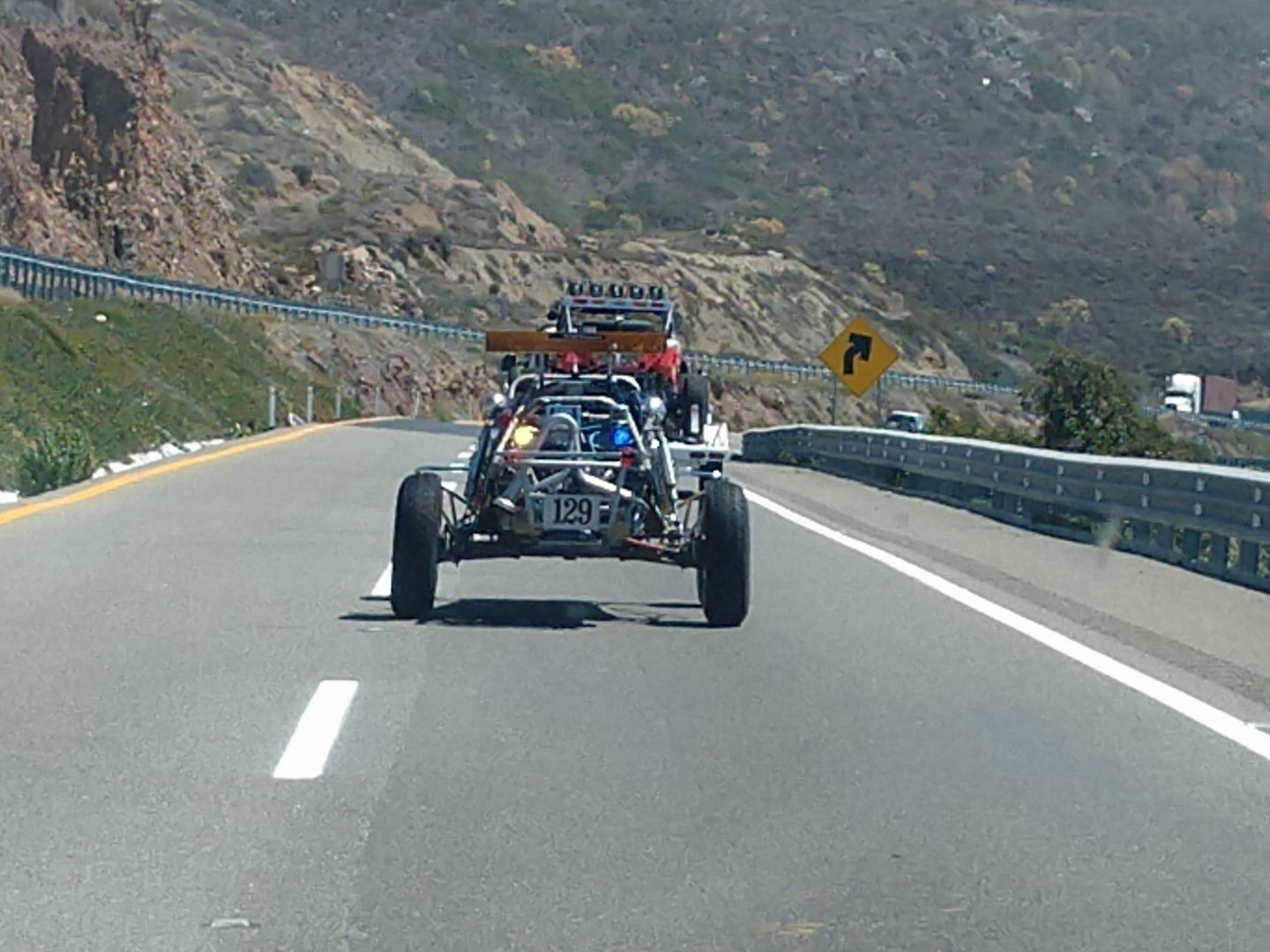 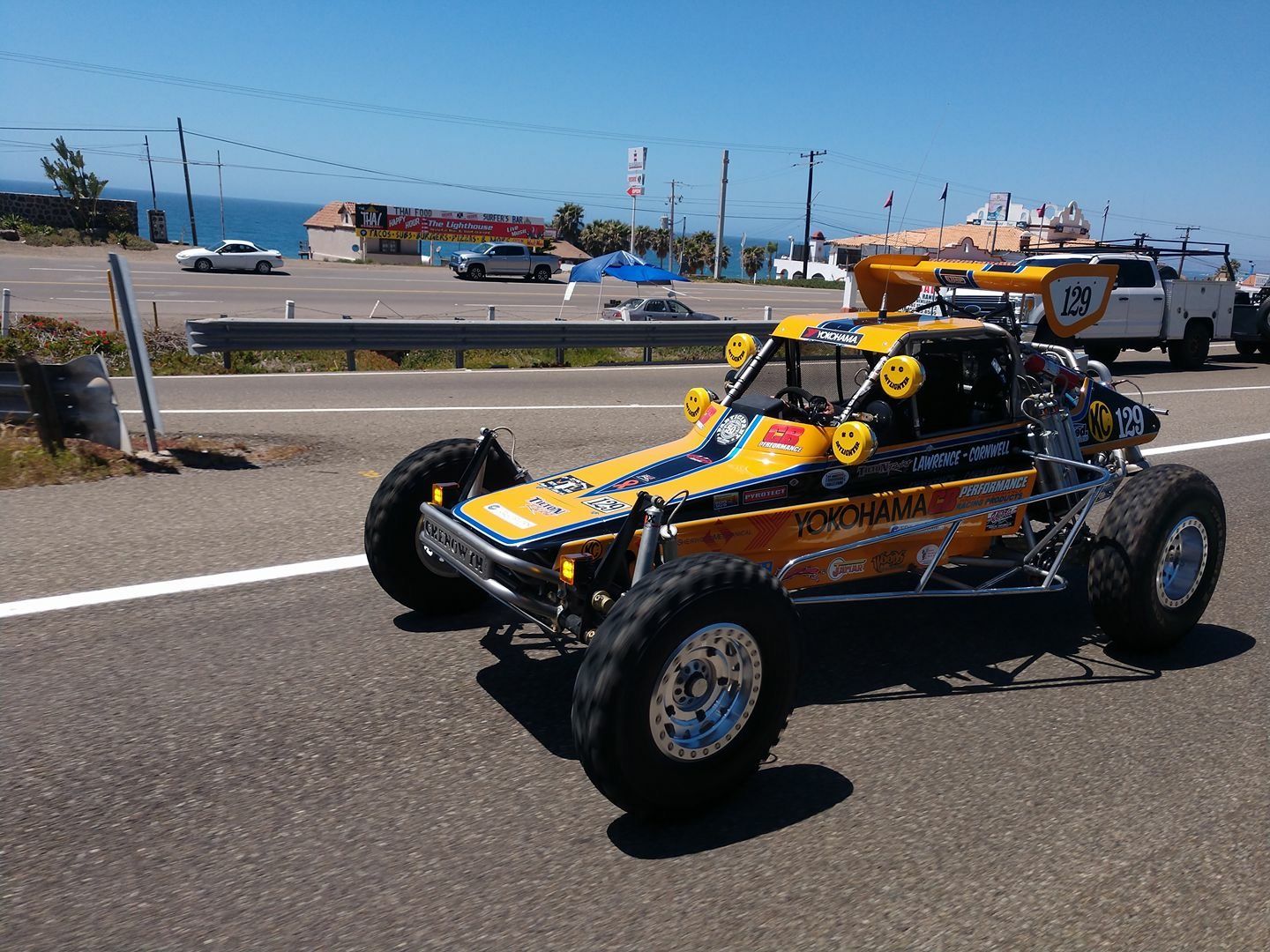 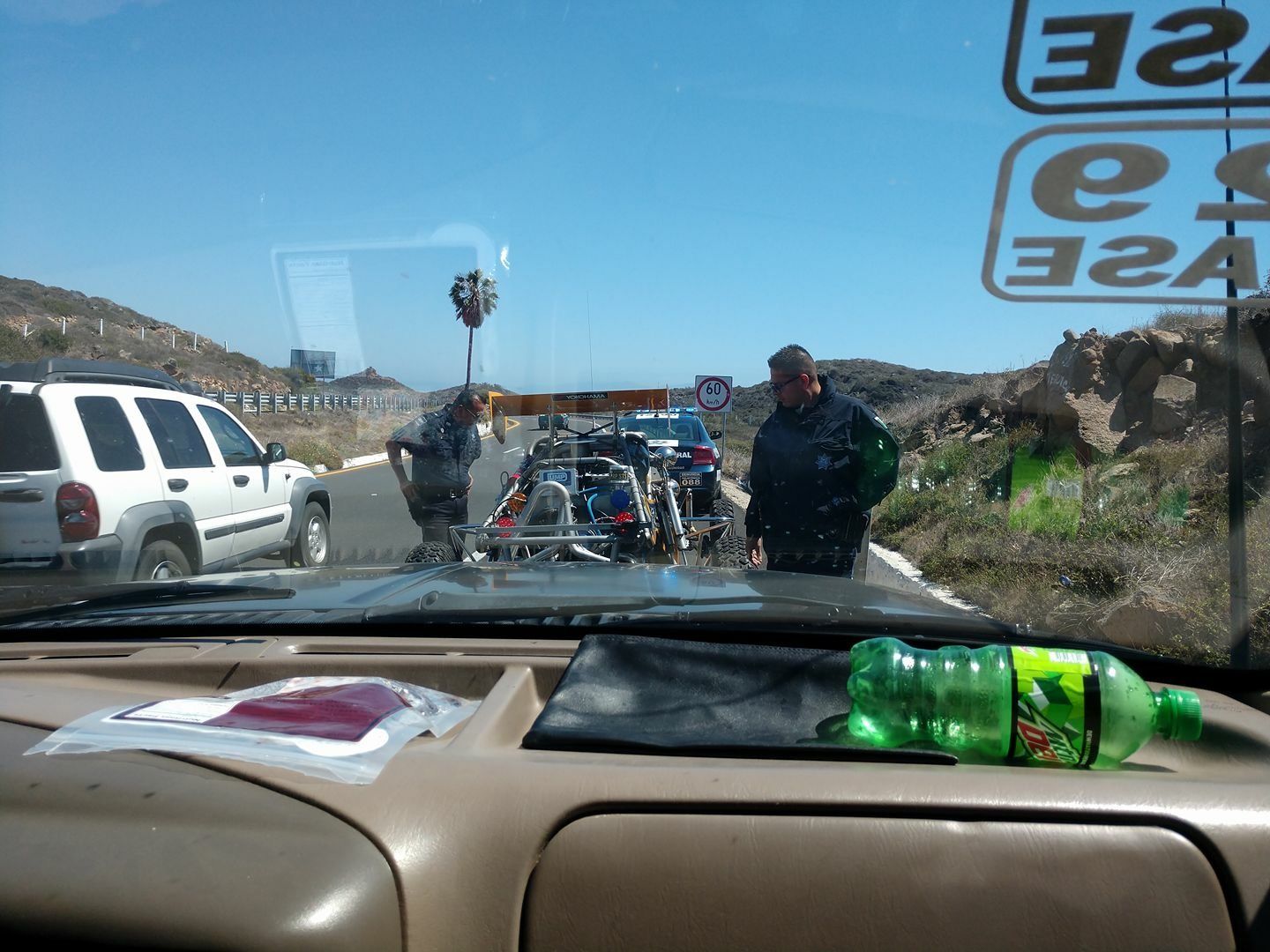 Ensenada - We had a couple of fun days in Ensenada that included surprise visitor, Glen Harris, Contingency, drivers meeting and good food. 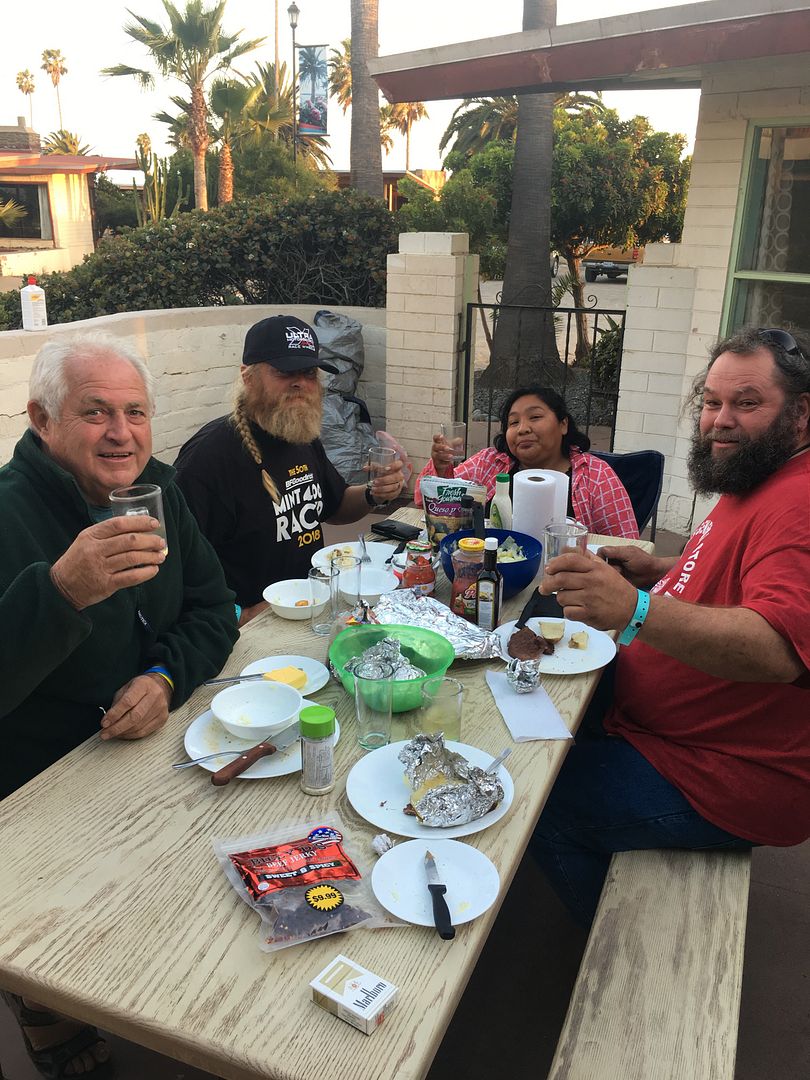 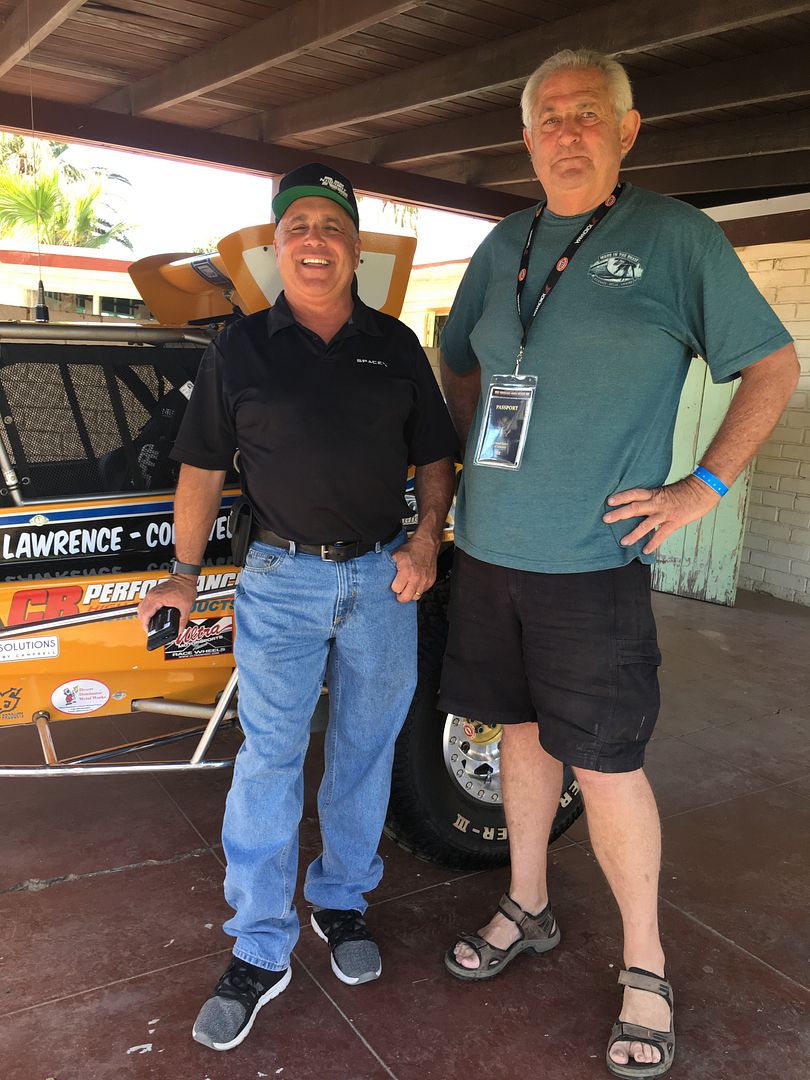 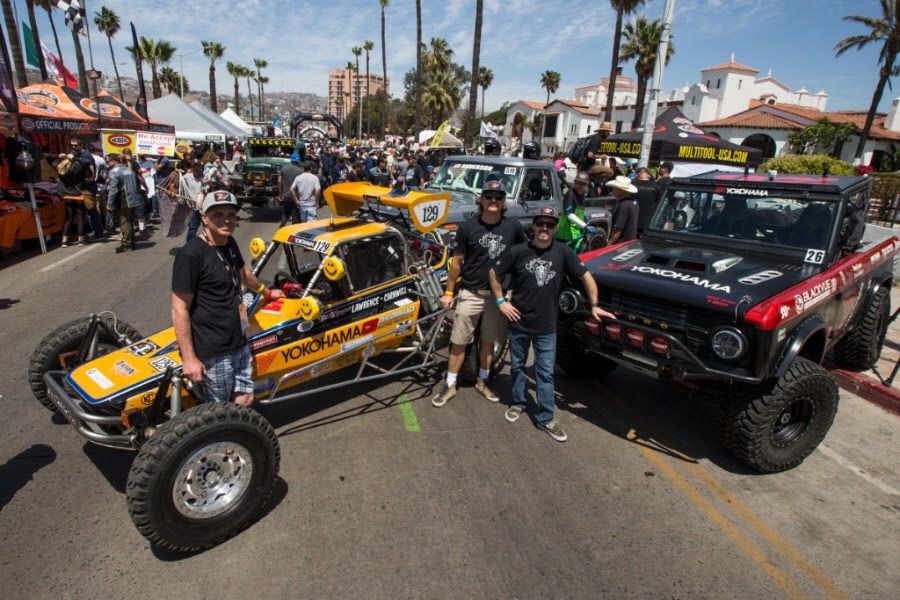 Jim Greenway with his wife Lisa and their beautiful old Raceco would become our main competition over the next 5 days!! 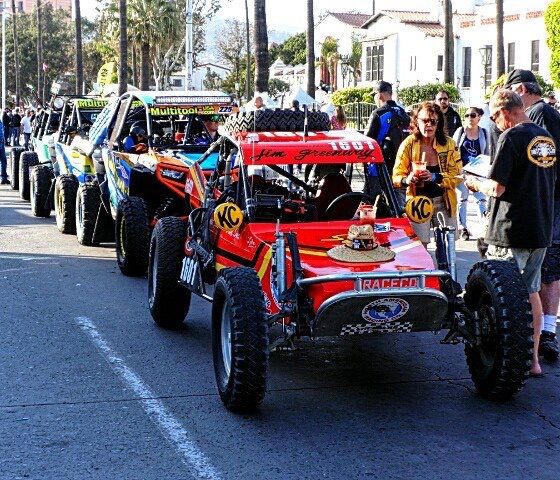 Day 1 plan was for Dan to take the start and I would drive the afternoon stage into San Filipe. The race started great and about halfway through the first stage Dan had built up a 5 mile lead over 2nd place. The our first problem happened Dan was tracking way off course. This turned out to be a GPS problem that would bite us everyday and cost a bunch of time a couple of times. The Lowrance Trophy 5 would go wacky, displaying strange pages and all buttons frozen. It is hard enough navigating an unmarked course in a single seat car where they expect you to use a road book. Dan managed to find his way back to the course but about 20 miles out Dan called on the radio to tell us he had a carburetor problem and the car was having trouble accelerating. We tried to fix the carb but it was running good enough that we didn't need to get a penalty for being late to the second stage, so I jumped in and took off. The Carb problem limited me to about 65mph on the dry lake. At four miles from the finish my oil light came on and the pressure gauge read zero! I quickly shut down the engine and got out to see if I could see anything. What I saw was no valve cover on the left side of the engine! Since I was in San Filipe I just called the team on my cell phone and told them to bring the spare valve cover and some oil. We spent the next 1.5 hours trying to find me! Who knew I could have just sent a pin drop to their phone!! After attaching a valve cover with a ratchet strap and adding oil, I was able to limp the last four miles to the finish. Giving the competition and hour an half head start is no way to start a race. Phillip would work hard getting the carb fixed and we would also enjoy the party at Lynn Chenowth's place in Percebu.

Because of the bad day 1 finish we would start waaay back on Day 2. I would drive the entire Day 2 and try to make up as much time as possible. The first stage is pretty short and wooped out. We would finish this stage fastest of all Legend era vehicles. The second stage was off to a great start and I was passing a lot of cars including two in my class. Then the GPS decided to go out in Frog Canyon and 20 minutes total was lost. While I had no navigation it looked like I was on a well worn course and their was only one way through the canyon... Right?... Wrong! there was a left fork that went up another canyon. I kept going the wrong way for 10 minutes before getting that lonely feeling. It was then that I realized rebooting the GPS fixed it for a while. I found my way back to the course and finished this stage in fourth. The last stage of the day was also short and you don't need GPS or navigation on this section. If you are not running over cactus, you are on the course. We finished this stage fastest of all Legend vehicles. With no rooms available in Bay of LA we had a great time beach camping at Dagget's.

Dan would do the morning and I would take the car in San Ignacio. Dan had a very fast run and we continued to make up time on the leader, Jim Greenway. However when I was getting in the car, I noticed the tow strap was attached to the front bumper and was tucked in behind it. As I was getting in the car, Dan said something about getting pulled out of a tree. The stage out to San Juanico/Scorpion Bay was personal to me because we have never completed this stage in previous years. It is also a little disconcerting to know that your team is heading east to the sea of Cortez and I was heading west to the pacific. If I need my crew it would be a very long night. While I completed this stage with a solid time it was not exactly trouble free. The only flats we would get all week happened on this stage (both of the them and I only have one spare). both flats were my fault and I would finish the last 20 miles on a flat tire but getting to Loretto without the need of a trailer was a big deal for us.

We continued to close the gap and had worked our way up to a solid 2nd place. We were still determined to win and we would beat the snot out of the Chenowth for the next couple of day. Dan would again take the morning and was the fastest Legend vehicle on the course. he passed Mark Stahl towards the end of the stage and would give me the car with about a minute in front of Mark Stahl. I got to the next start about 4 minutes early and laid back until it was my time to start. While I was waiting Mark pulled up beside and asked if I wanted to race. I just revved my engine and Mark promptly jumped in front of me at the start ^()&*&^*&^!!! Mark's truck left about a half mile thick dust cloud. When I pulled up to the start, the course had disappeared but I took the green and the race was on! The dust was too thick to get to him but I was just thrilled that the new car with the new engine could stay with him in the high speed sections. I thought if I could stay close, I could get by as soon as the course got rougher and more technical which is exactly what happened. There was nothing more thrilling all week than hitting the push to pass button on the multiple Baja 1000 champ. We finished this stage fastest Legend and made up more time on the leader.

Day 5
Dan would start day 5 and give me the car in Todos Santos. We had made up over an hour on the leader but we were still 22 minutes behind Greenway. This was also Dan's 65th birthday. When Dan got the car to me, I asked him if he would like to take the car to the finish? With a big smile he said he would love to! I said happy birthday Dan take it home! it was so close at the finish in Cabo we didn't know who won. It wasn't until the next day that we found out that after 5 days and almost 1400 miles we missed 1st place by 6 minutes and had to settle for 2nd in Legend Buggies (1976-1982). We tried extremely hard and never gave up. We did win a set of race wheels for being the biggest time maker this year. Congratulations to Jim Greenway on the Legend Buggy win and Mark Stahl on the Legend Overall win. Thank you also to our sponsors, Yokohama, Ultra Wheels, CB Performance, Campbell Travel, Sherwood Mechanical, Pyrotect, KC-Hilites, Woods Arms, Glen Hellen Raceway, PRP Seats, VP racing fuel.

The car is currently being prepped for the Baja 500! A few changes are being made based on what we learned at NORRA. 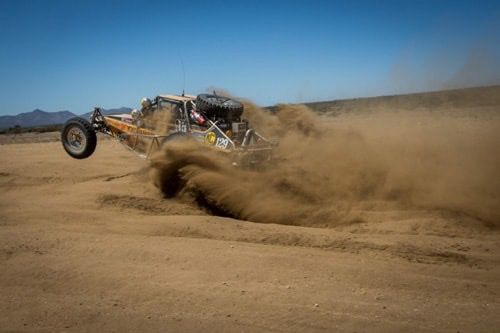 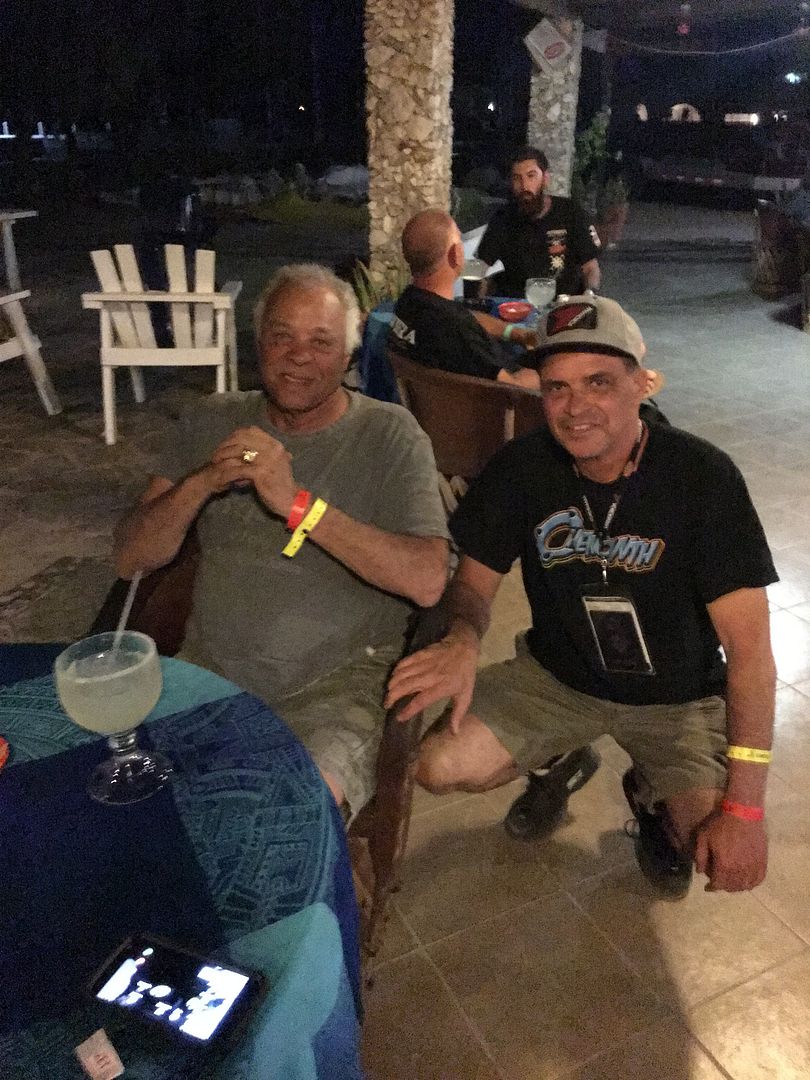 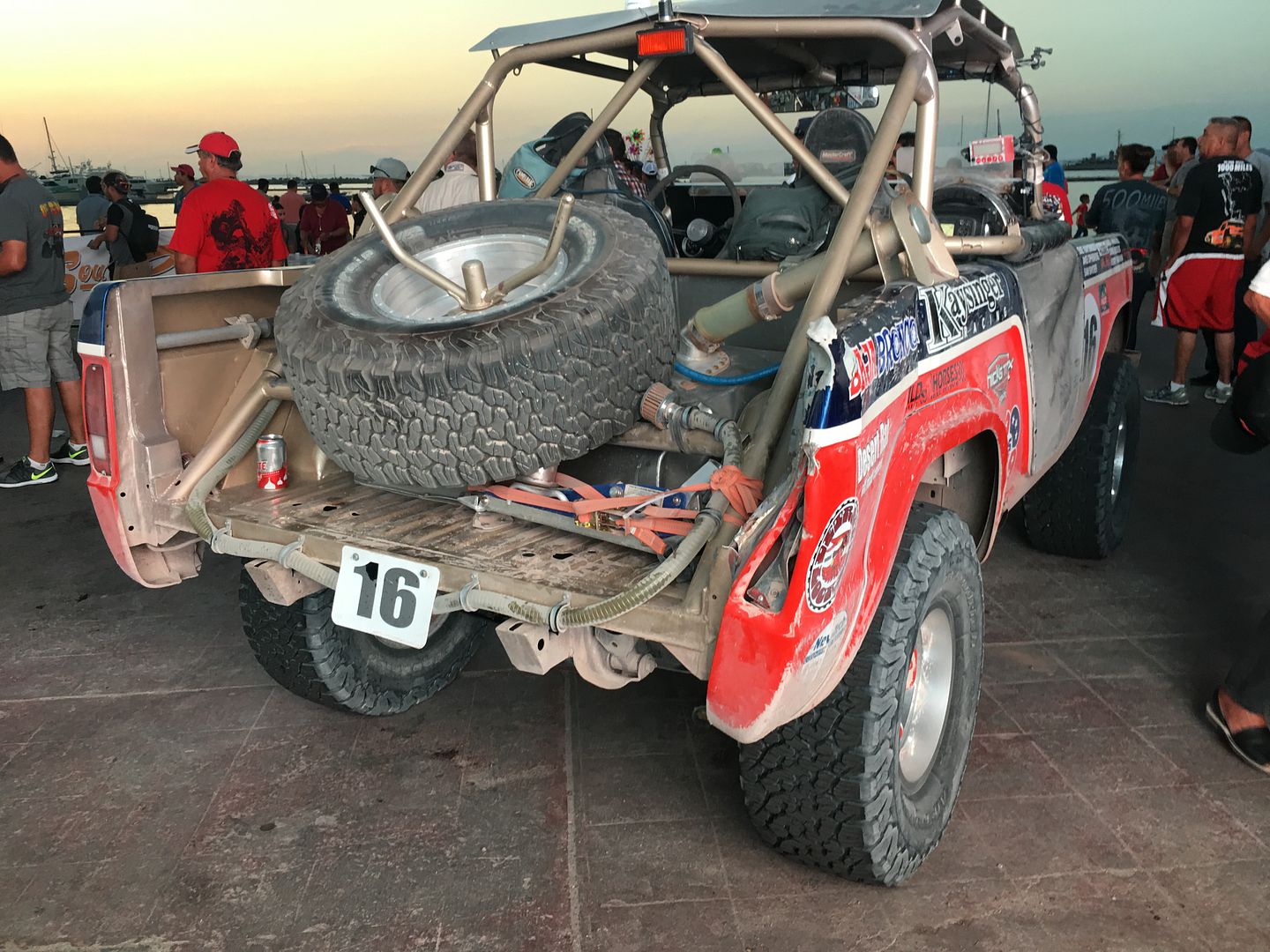 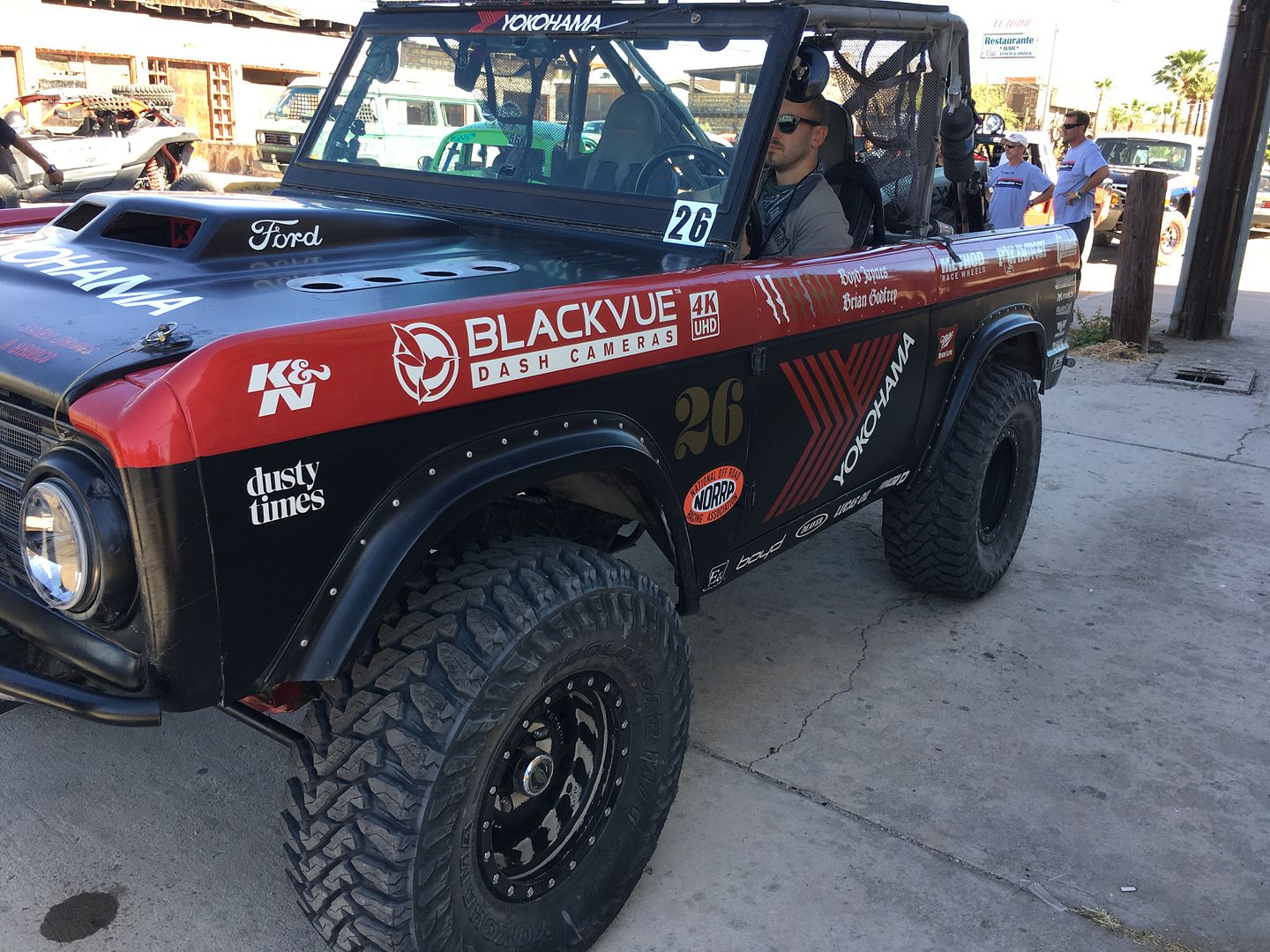 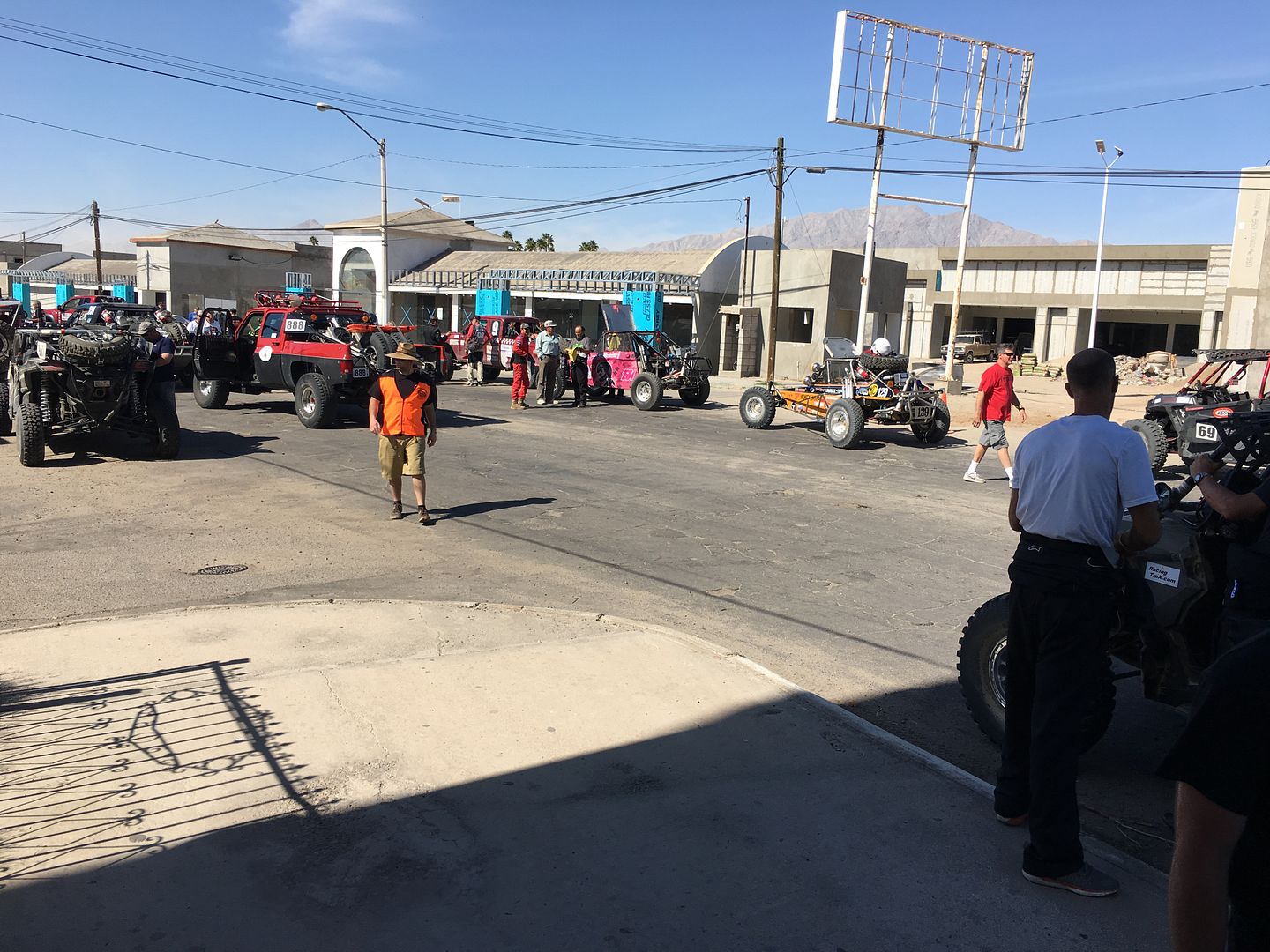 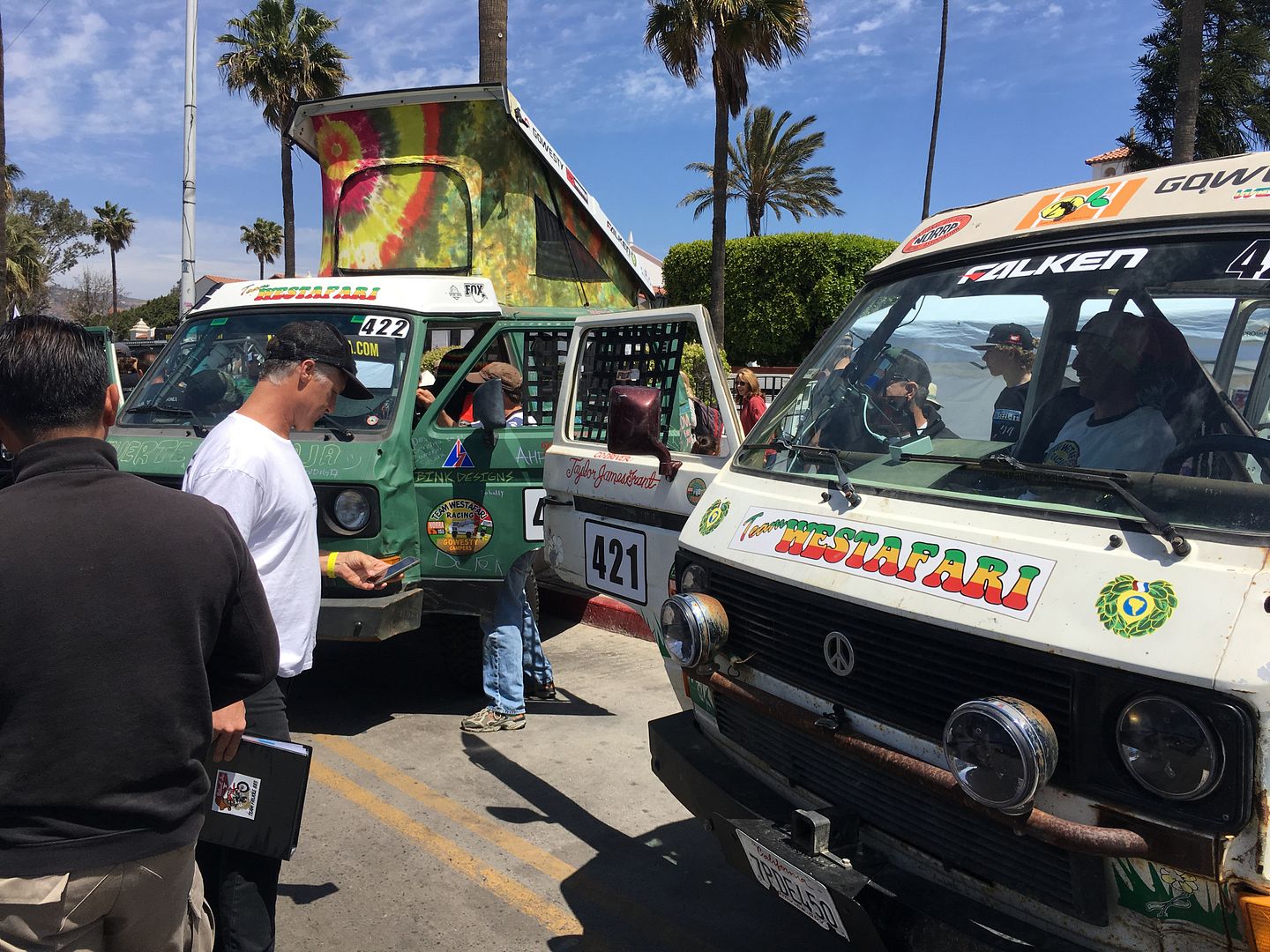 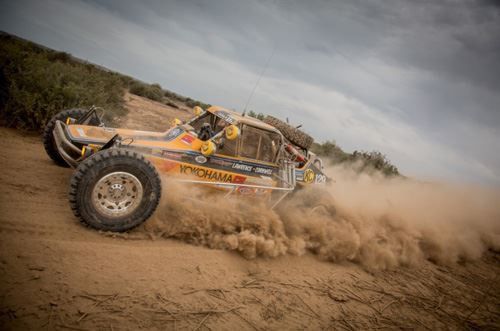 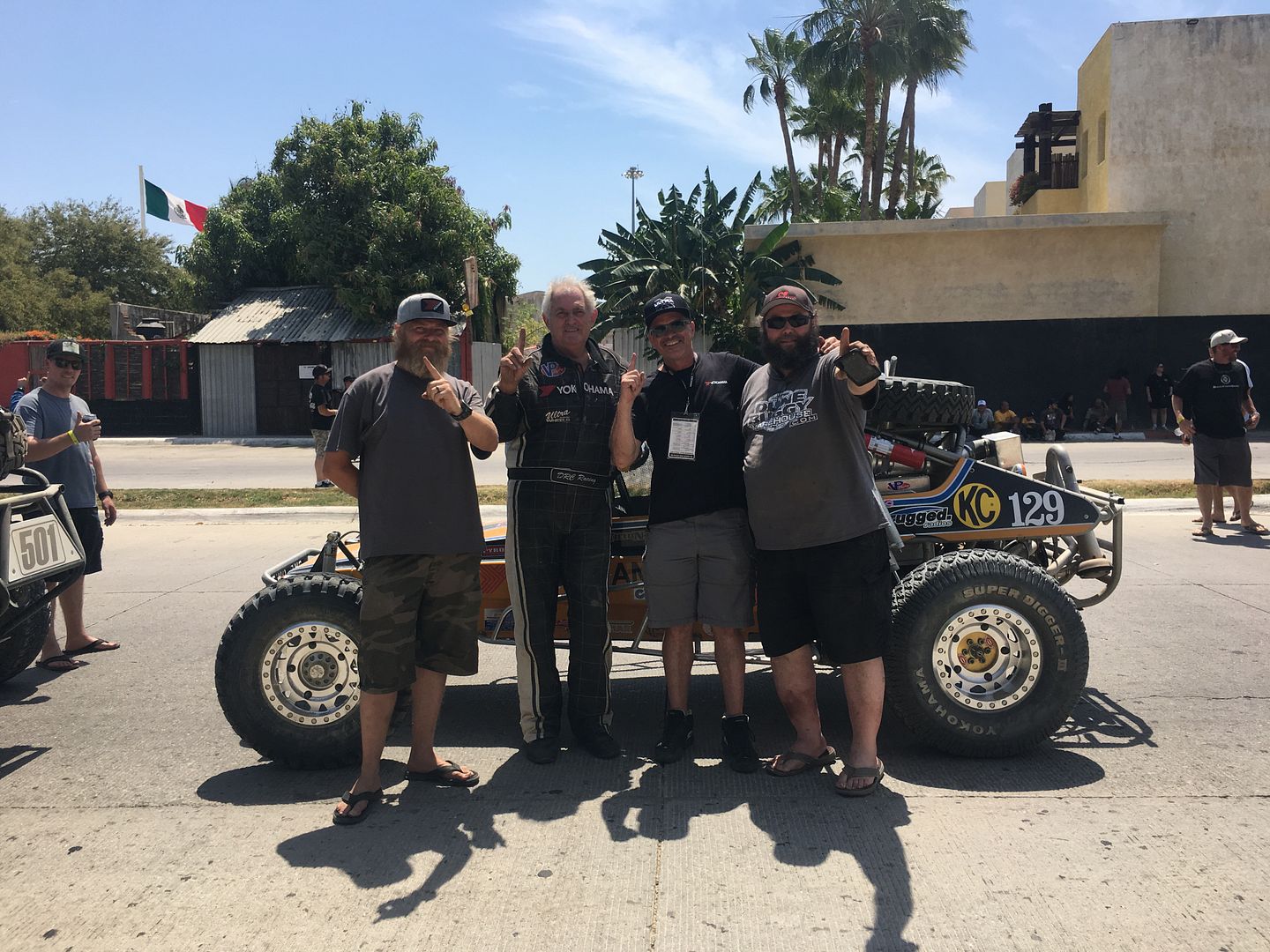 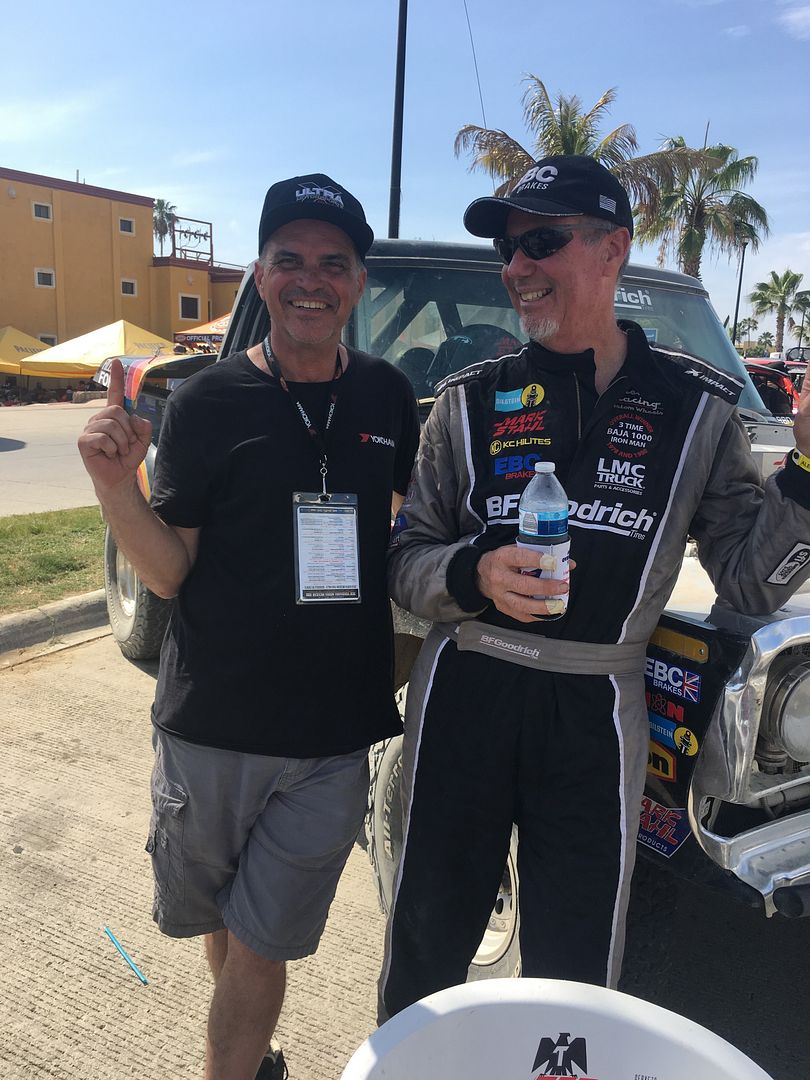 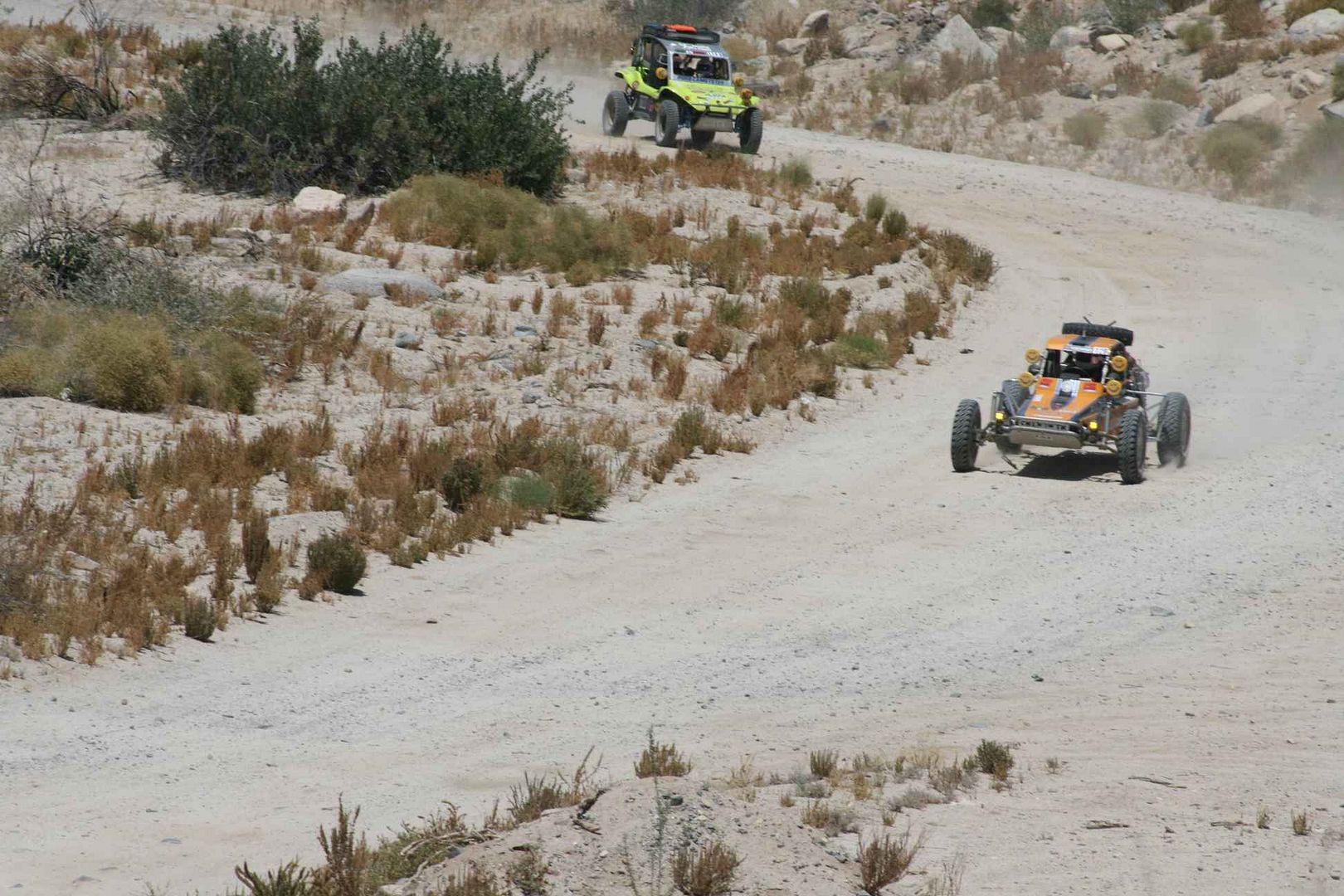 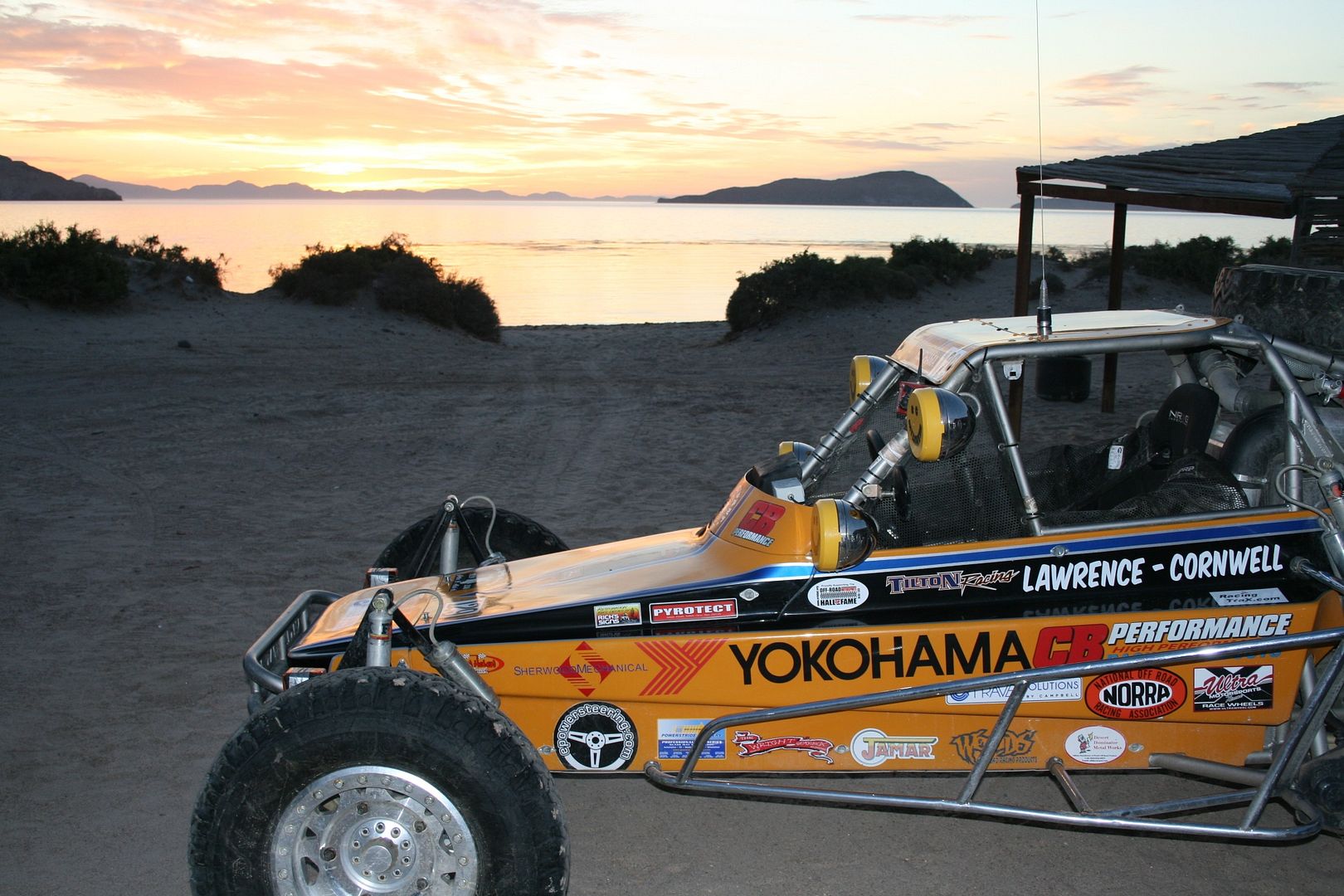 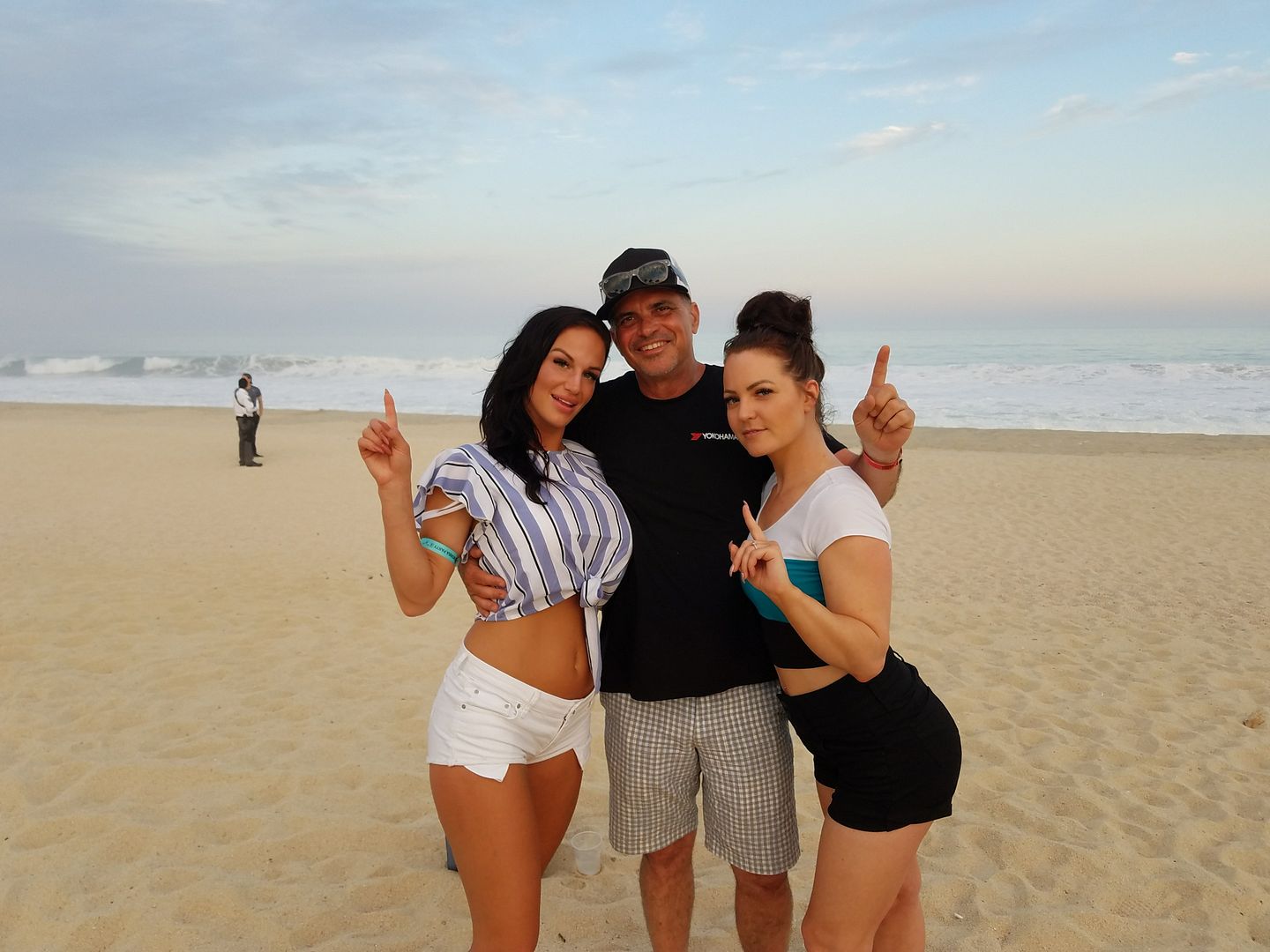 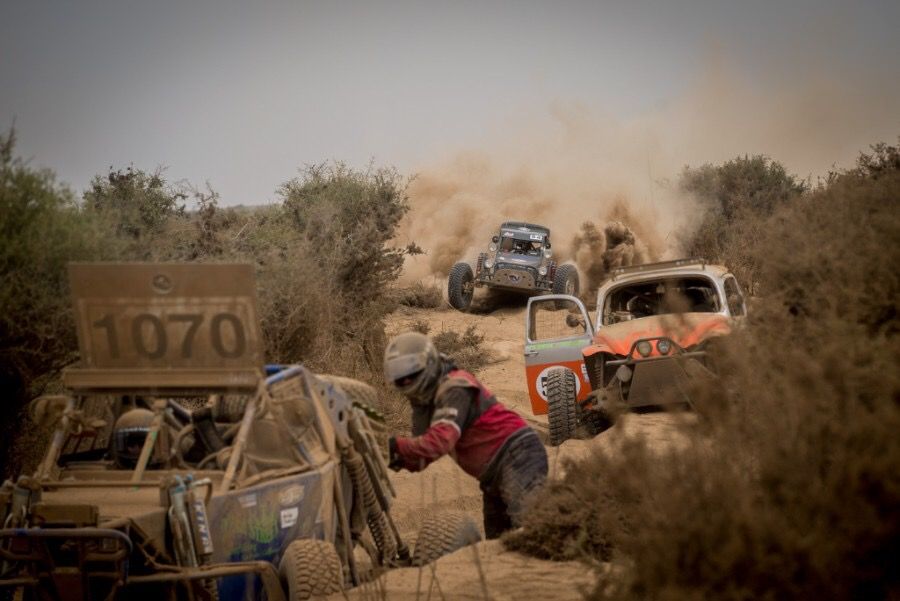 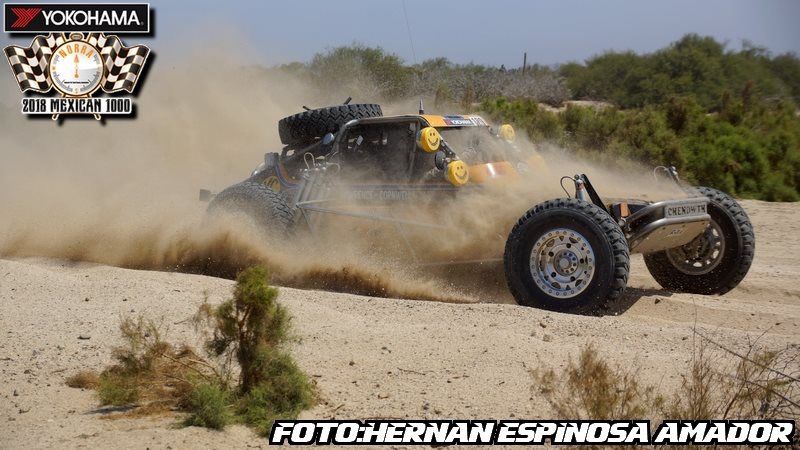 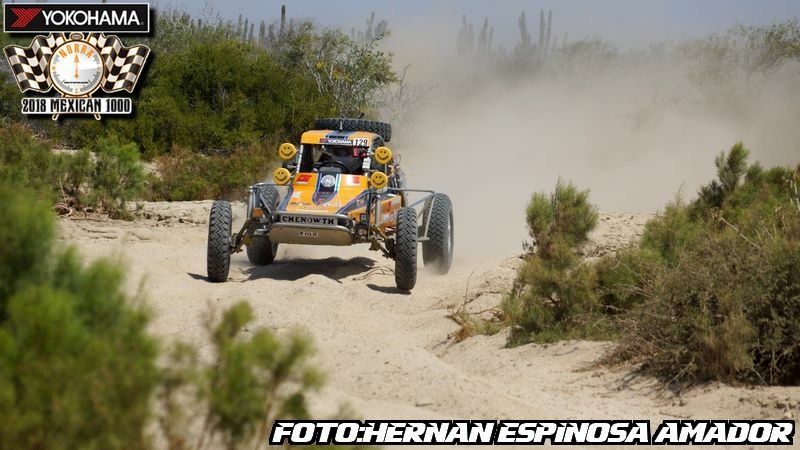 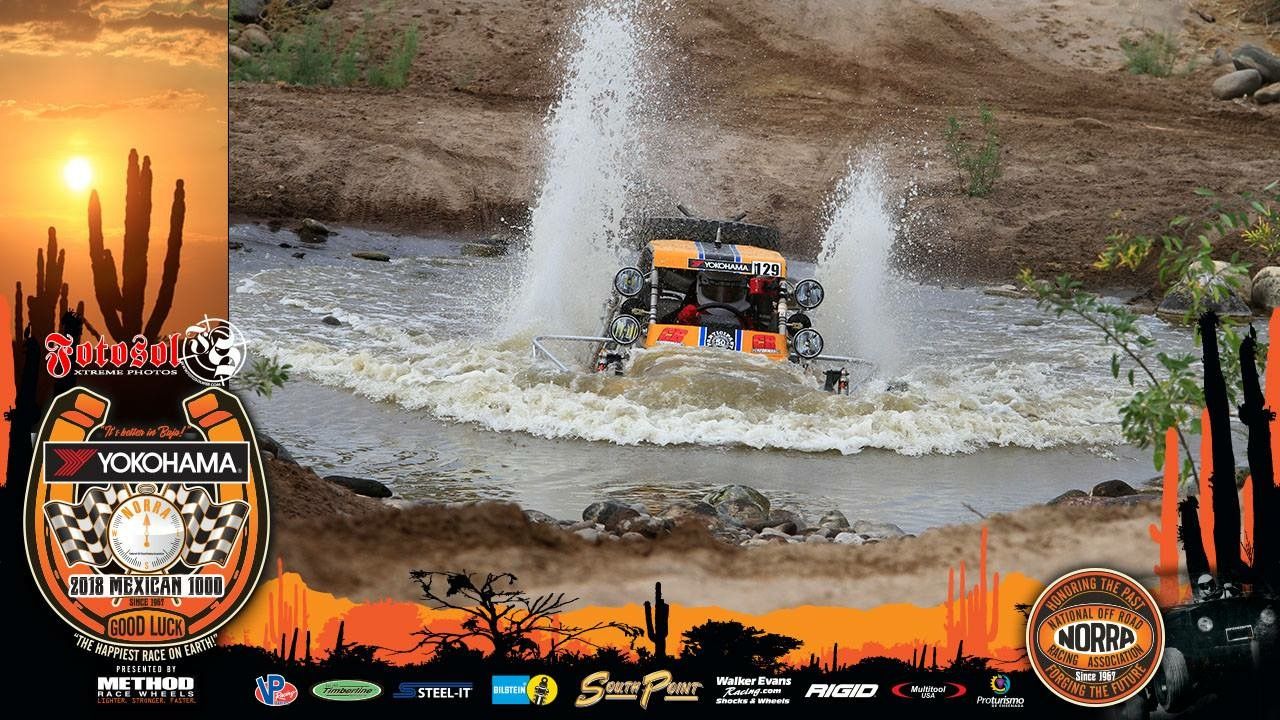 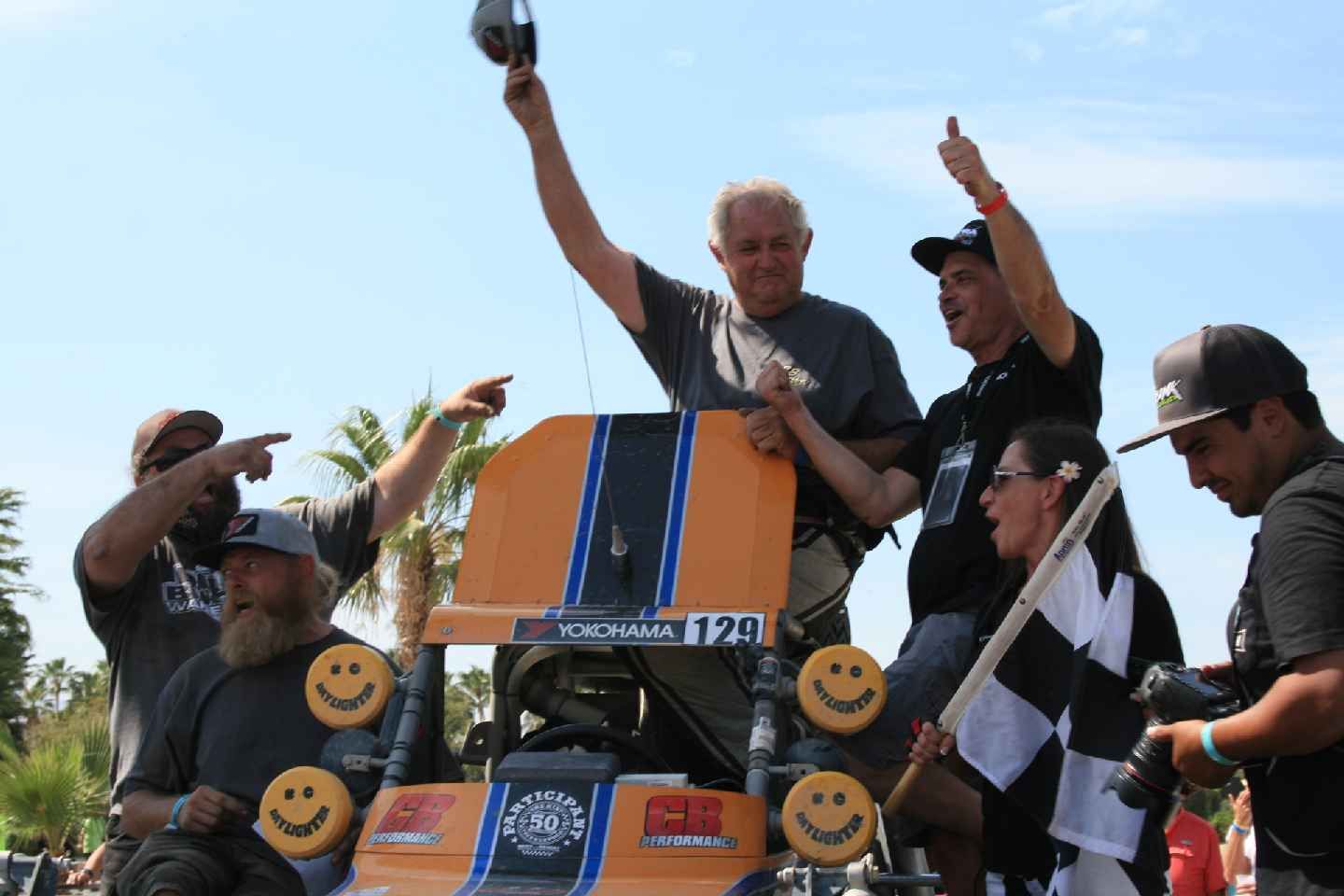 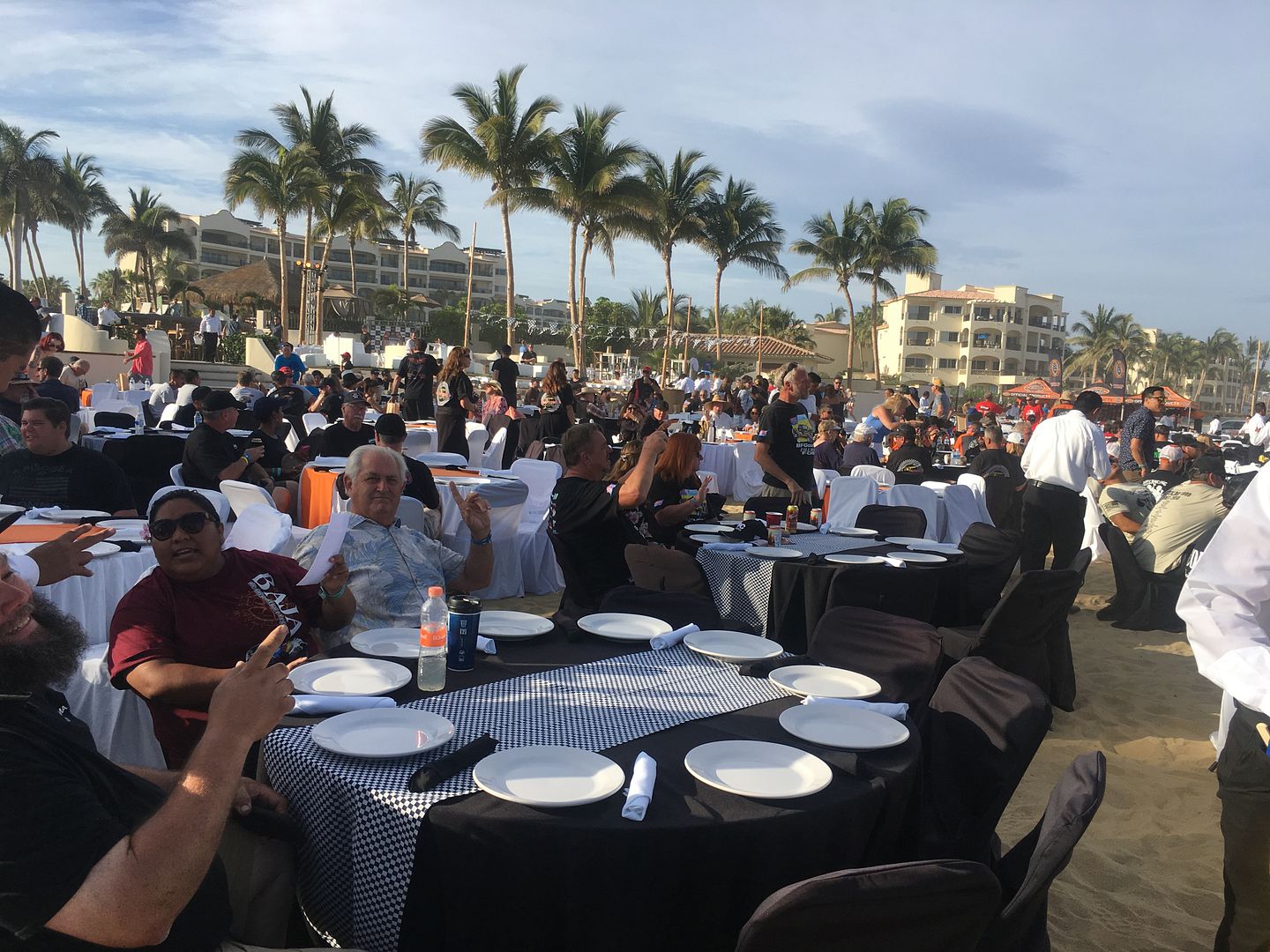 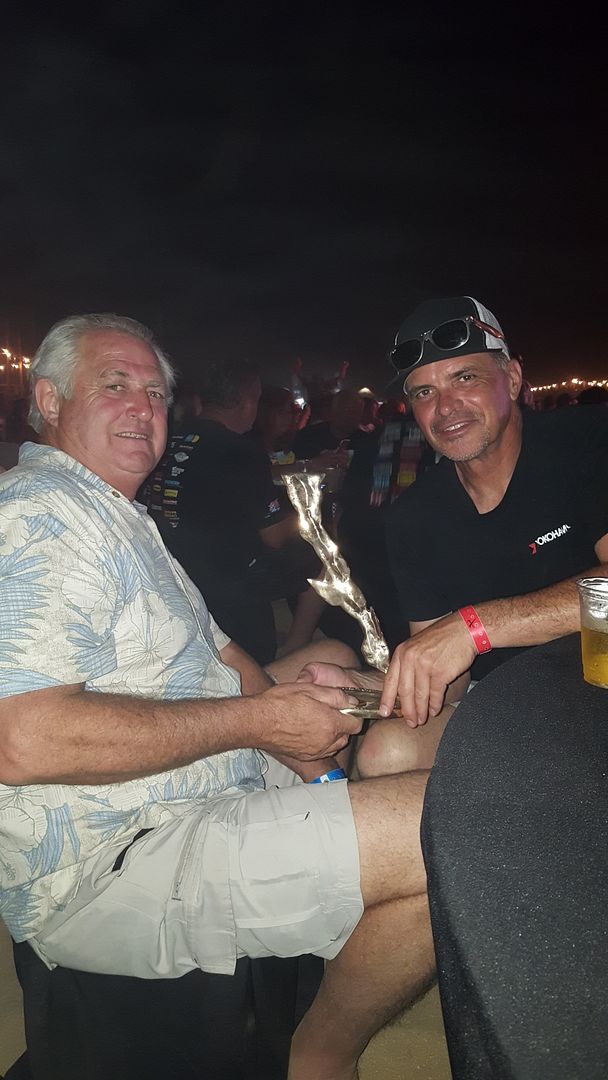 Congratulations, and thank you for putting out such a great article. My son and I along with the team coming to the Baja 500 hopefully will make you and Dave proud with the same car.... can't wait.

Great story and congratulations to you and your team. Awesome vintage car and restoration.
Nice photo of the #54 working thru the silt.....DocRamo

Great recap Bob and good talking to you on the phone the other day. Woot!

Peter Alesi Jr. said:
Congratulations, and thank you for putting out such a great article. My son and I along with the team coming to the Baja 500 hopefully will make you and Dave proud with the same car.... can't wait.
Click to expand...

Good luck to Pete, Peter and the entire team !!