I just realized I had this post in the wrong place.

New to the idea of 4 wheels but not new to the desert. I have a solid Scout collecting dust with some cool family history. I would like to include more of my family in my appreciation of racing the desert and ran across this picture.

I have a few questions and I am open for all advice. If I build this scout into a norra race truck will I ever be able to race it at any other series?

Could it be competitive?

Who should I use to build the rollcage and suspension mods in SoCal?

I am already committed to a vintage xr600r for 2017 so I have plenty of time. 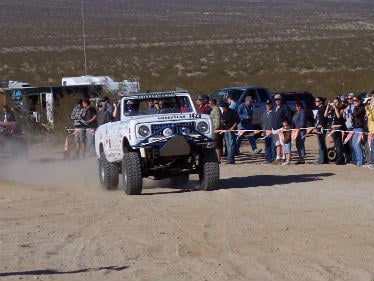 International Harvester Only- Your complete source for IH Scout parts

He might be able to offer his thoughts as to your third question.
Hey! You kids!! Get OFF my driveway!!! If you can't go away happy, just go away!
C

I guess they had AMC engines? So maybe we might accept IH in Jeepspeed Series. Will let you know in a few days.

Clive Skilton said:
I guess they had AMC engines?
Click to expand...

Not many, just a few inline sixes for a couple years, IIRC.

Most racing Scouts ran the 345 CI IHC SV medium duty motor.
Hey! You kids!! Get OFF my driveway!!! If you can't go away happy, just go away!
C

To tell the AMC engine from IH's own V8s, look at the thermostat housing. AMC is round. IH is rectangular. There are other differences but this is the quickest method.

It is also worth noting that International Harvester was not really geared up for the production of a four-cylinder engine, as was seen in the 152 and 196 engines. Consequently, they simply cut off four of the cylinders and sold these two engines as half of the V-304 and half of the V-392. This is why these engines are in an inline, yet slanted formation, half of a V-8. They became small engines with a great deal of torque, excellent cooling because the block contained water channels originally designed for the larger engines, all while getting quite acceptable fuel economy. The Scouts with the 196 engines easily achieved 20 miles per gallon.

There are rumors that a few early Scouts left the factory with Perkins diesel engines, but these would have been special-order trucks and not a standard option. The Scout II (made between 1971 and 1980) had the following engine options: the 196 4-cylinder, 232 6-cylinder (early production), 258 6-cylinder (later production), 304 V-8, and 345 V-8. At the time, International did not manufacture a Diesel engine small enough to be used in the Scout, and so starting in 1976 used the Nissan SD33 Diesel engine as a Diesel option. This engine was replaced by the Nissan SD33T turbo Diesel engine in 1980.

I think our OP should build a Sherman Balch replica or tribute truck for NORRA.
Hey! You kids!! Get OFF my driveway!!! If you can't go away happy, just go away!

I talked to Mike. He was very generous with information. I will make a trip there just to spend a day talking to him and looking at his scout.

My understanding is for an "era" vehicle I could use an engine from the same era so I naturally started thinking a small block Chevy with aluminum heads just to cut some weight.

Who is Sherman Balch? That sounds very cool.
Thank you for everyone taking time to reply. The jeepspeed idea sounds awesome but my interpretation is its a no go.

SCORE Winning 1977 International Scout Race Truck
Hey! You kids!! Get OFF my driveway!!! If you can't go away happy, just go away!
B

Build your truck up with modern non-bypass shocks with the addition 2.5" airbumps and race it in class 3 at any modern desert race and pull the bumps for the vintage feel (a little harsher when using all the travel) for NORRA. The reality is, class 3 rules are still somewhat close to what they were back then. Some things have gotten more sophisticated, but the 4wd in the class kind of keeps things subdued as far as technology goes. Plus many of the smaller series have simply classes for multiple trucks and even sportsman classes to let you go have a good time without too much money being spent.

I like the sound of that! It sounds more expensive... but that's racing. Do you guys recommend anyone that could help me with suspension for a class 3? I was looking at a ramcharger and it looks pretty involved.

International Harvester Only- Your complete source for IH Scout parts

That scout worked very well!
"The strongest reason for the people to retain the right to keep & bear arms is, as a last resort to protect themselves against tyranny in government." Thomas Jefferson

I have a SCORE class 3 76 SSII. It was one of the original factory IH race rigs raced by Jimmy Jones. Frank Howerth was Jimmys co driver early on and that is his truck in your first post. Mine last raced the SCORE Baja 1000 in 1997 with Dick Sasser and Gene Curiel. It is fully functional now and I should have it at the IH Sierra Fall Ralley in Grass Valley California again this year. Only this year it will be pulling gas out of its own fuel cell and not a side tank. Last year I had maybe a week to get it ready to take to the show. Short notice but it was sort of an unexpected buy. With luck Jimmy Jones other race rig, the Baja Binder, might make it also. The Show is near IH Part America who is owned by Jeff Ismail, Mikes brother. Here are a couple of pics of how it looked back in the day and how it look when I bought it, and how it last raced.
In my case the biggest question is how to restore, or not. I sort of like the current race patina, body damage and all. I have had some say I should restore it to original condition, like 76,77,78 when Jimmy raced it and I love the classic white SSII look. Maybe I just need some extra skins so it can change back and forth . For now I think I am happy just to get all the systems back on line and running again.

Ron where do you live? Your project sounds very cool! I would love to take a look at it. I have lost a little steam currently as I can't get excited about my engine choices for a class 3 truck. If I dump a ton of money into it I would rather have a much more modern power plant.
Bing I don't think you need to dump a ton of money into the engine. You are not drag racing or pulling. A moderate build with survivability would probably do. Mine has a 345 E engine, non emission heads. Oil pan is modified, I am guessing, to prevent the cavitation issues with the double pump Scout pan. Mine holds 9 quarts +. transmission is a 727, full pressure manual valve body with reverse shift pattern built for 900 HP. Dana 20 transfer case. Front axle is a 44 open carrier, rear axle is a spool, with 45 spline alloy axles. 4.56 gears 33x10.50 Baja TA tires. Suspension is leaf under axle reverse shackle in the front. Early on pics show it spring over reverse shackle but it was quickly converted back to spring under. Leaf springs are National packs, but they are out of business. I would go with Deaver. Axles are heavily braced. Pretty much the whole Scout is built around the cage Jimmy Jones built. That is going to cost some money to do right. It is all cage and skin. Cage goes through the tub. It supports and protects everything. all the inner fenders and such are non existent. Best I can tell, it has had three main drivers over the years. Jimmy Jones, Russ Kirkpatrick, (both IH sponsored) and Dick Sasser. Tempting as it is to race it myself, it just has to much IH history in it to risk total destruction. It would however make a good pattern for possible assembly of another class 3 racer.

What an awesome rig! Thank you for responding! Let me know if you make it to the rally. I will come down and have a look. This sounds like a great pattern for my build.

Ron, having chased & assisted w/prep for the last few years of this vehicles life w/RJS, here's my $.02. Get all the transmission's rebuilt by a quality guy in your area. Spent too many hours under the truck in the desert swapping them out and overheating . Check all axle shafts, lots of torque on the splines. Engine was dependable, transfer case durable, suspension stiff but solid. Class 3 ain't for sissies. Did it come with the blow up doll & La Cucaracha horn?

Thanks for the info. I have all the spares and the transmissions are on the list. Looks like a bugger to pull with the extra cross member. Had to do a little R&R to the horns but they all work. The Bull, the Charge and La Cucaracha. He would not give up the doll. She is sitting next to the Trophy Truck. ok Scout guys years ago probably 1989 along I 5 central valley I talked to a guy at a gas station headed for the Baja 250/500/1000 .Black Scout basically stock suspension still had the front sway bar built with a lot of metal everywhere . I knew not a damn thing about Baja races at the time . Who was it ? where is the truck ?
I have an 80 traveler dsl waiting to be built ,that or 78 Bronco will be my next project. That is if the black rig does not turn up.
Share:
Facebook Twitter Reddit Pinterest Tumblr WhatsApp Email Share Link
Top