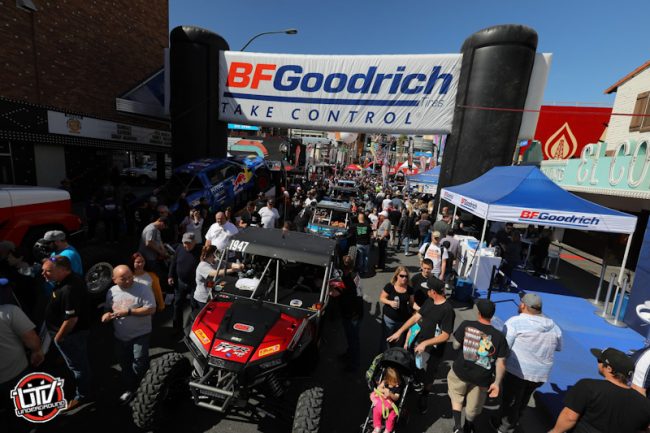 Las Vegas, NV (3/3/2017) – The Best in the Desert Series Polaris RZR Mint 400 is known as “The Great American Off-Road Race” and this year’s event is certain to live up to that tagline as more than 100 UTVs are set to take the start. Festivities kicked off on Wednesday with a parade of UTVs and Trophy Trucks driving down Las Vegas Boulevard. Friday’s Contingency Day showed just how much this event has grown in a very short time.

Contingency Day showcased a copious group of vendors, racers and more. The event started at 8 a.m. ran well into the evening. It featured the racing machines being pushed down Fremont Street to tech inspection. The huge crowd on-hand got to get an up close view of racers, their machines and the vendors that keep them going.

UTV Underground was up front and featured its Block Party with Active Screen Printing, Factory Canopies, as well as Robby Woods and Battle Born Engineering with their million-dollar Trophy Truck. UTV Underground also showed off the custom Polaris ACE 150, which was just unveiled. Justin Lofton brought the Polaris RZR he won for his Mint 400 Trophy Truck win race last year. Attitude Toy Haulers and Polaris factory racer Dave Martinez along with Seth Quintero. Polaris and UTV Underground thrilled the crowd with giveaways throughout the day.

Mitch Guthrie, Jr. won the first BITD race, putting him on the pole for Saturday’s race. The Mint 400 is known for its wild starts, so Guthrie Jr. is glad to start first in hopes of avoiding some of the carnage. He hopes a good start will allow him to back up his first BITD victory. 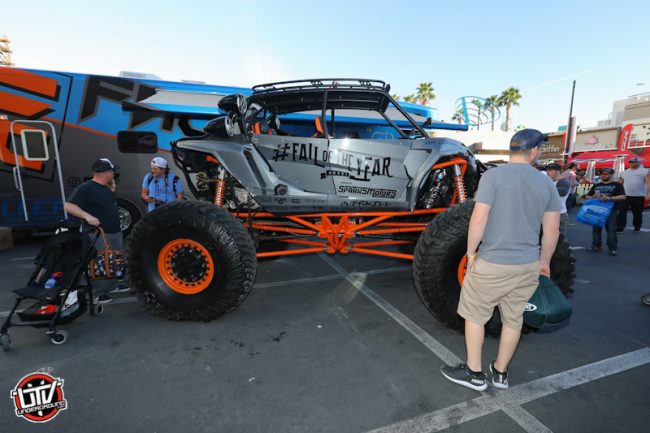 “Everyone wants to win the Mint,” explained Guthrie jr. “Coming into this race on the pole is huge. I don’t want to be in the back of that pack at the start. The event is the craziest thing. This is my second time here and it’s even grown since last year. With over 100 cars, this is easily our biggest car count. It took me a year of desert racing to get a win. Now I have to back it up.”

Motocross legend and Guinness Record holder Jolene Van Vogt is one of three women entered in the UTV class here. It will mark her first-ever desert race. She is teamed with desert racing veteran Jim Beaver, as well as professional racer, drifter and TV star Tanner Foust.

“There is a whole lot of unknown out there for me,” said Van Vogt with a smile. “That’s what makes life exciting is to go on adventures. I was given a great opportunity here with Jim Beaver. He came up with this concept and brought it to Polaris. We’re going to go out there, have fun, finish and try to do well. I will start as co-driver with Jim, Tanner will take the second lap, and then I will take the third as driver. Two years ago is when I first got into a RZR. Then I started doing the Terracross. This is the next step. I am so grateful to get this opportunity. This is like a huge block party. Everyone out here is having fun.” 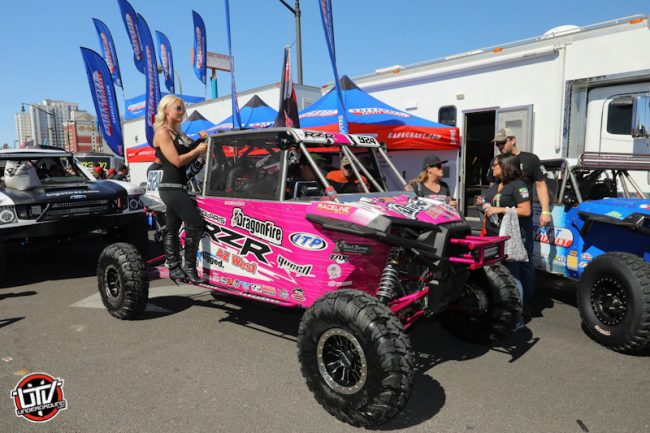 “The Mint is special,” said Kristen Matlock. “It’s a giant event that has been going on for many years and it attract so many different people. Last year I was second and I’m hoping to bump that up a position this year.”

Making the several-thousand-mile trek from Ohio is HMF Engineering’s founder Hans Luenger, who will be driving a RZR in the Mint 400. Luenger started HMF back in 1997 and his company supplies exhaust systems to top UTV and ATV racers, as well as on and off-road motorcyclists, worldwide.

“It helps me to get out West and do the racing I like,” said Luenger. “It’s so hard for me to race so far away, so it’s good to have a friend who has the crew to keep us going. It’s an awesome atmosphere. We got six inches of snow back home, so this is nice. I’m doing the middle leg. We have three drivers. Each will do 120 miles. It should be fun.”

Ask anyone who has more experience at the Mint 400 and the answer will usually be Brandon Schueler. Schueler has competed here every year in the modern era. He is amazed by the growth of the event and the UTV industry.

“We’ve run this race from the very beginning,” said Schueler. “It always kicks our butt, but we come back every year. It is insane how much it has grown. There is a waiting list 100 cars deep and they had to put a cap on the entries. It’s grown more than I could have imagined; it’s incredible.”

Schueler enjoyed the festival atmosphere BITD has put together leading into the race. His experience tells him that racing is about entertaining fans, as much as it is about the competition. 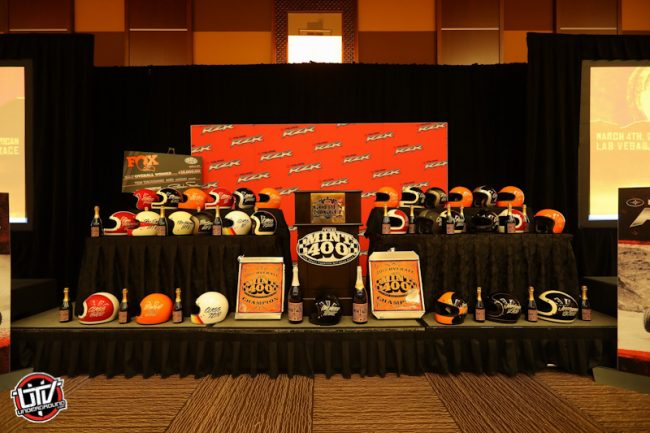 “The parade is really neat,” said Schueler. “It gets people out to see all of the race cars. The Fremont experience is awesome. People get to come down, see and touch some products, hang out with the racers and see the racing machines. We’re hoping to win it this year. We need a good finish to keep us going strong. We’ve been testing like crazy to get our car dialed in.”

Contingency Day was also about all of the vendors. The street was filled with booths from every major parts supplier, builder and accessory company in the industry. Lorin Morrell from SSV Works was showcasing his new MRB3 Media Controller. The unit features Bluetooth and auxiliary inputs and has a super bright LCD screen that even works in direct sunlight. 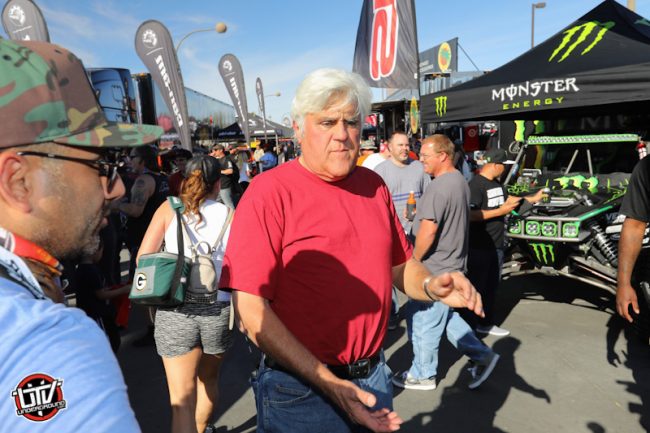 “We’ve had a solid stream of people,” said Morrell. “I love the Mint 400. I have followed it since I was a kid and I am not a young guy. I’ve always been a fan, so to be involved in it is like a lifetime dream. It’s nice to be among our extended off-road family from all of the different venues.”

“Having all of these people out here to see the RZRs lined up and see our wraps has been a great experience,” said Madrid. “This is our fourth year and we’re seeing some return customers. We’re really feeling like part of the event. There are a lot more vendors this year and everyone is really getting the hang of it. There are a lot of SXS out here, which is really good for the industry and everyone involved.”

With near-perfect weather expected for the event, as well as rain last week, the race is certain to thrill. Dust-free conditions are expected on the circuit, which is laid out in the desert and hills between Primm, NV on the California border.

Racing gets underway Saturday at 6 a.m. PST. Fans can follow the event online at www.themint400.com/tracking, and UTV Underground has Harlen Foley out on the track shooting Saturday, so be sure to check back for photos, reports, and results.