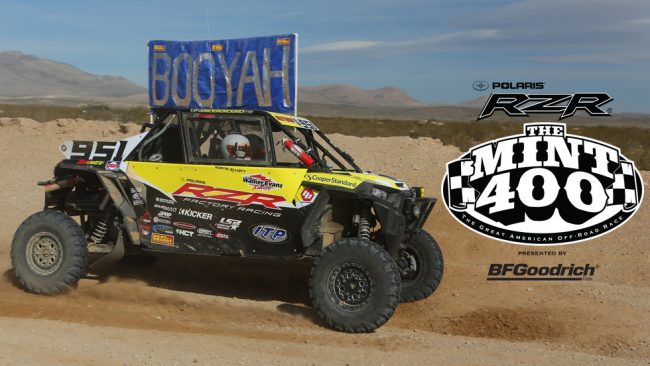 Primm, NV (3/5/2017) – Mitch Guthrie, Jr. backed up his victory in the Best in the Desert Series season opener with a dominating victory in the Polaris RZR Mint 400 presented by BFGoodrich Tires. Guthrie Jr took the lead from the pole and was never seriously challenged as he won his second consecutive race in the UTV Pro Turbo class. Derek and Jason Murray finished second, ahead of rookie Sven Ellstrom. David Martinez was fourth, followed by Logan Gastel. Dodge Poelman finished first in the Pro Production class.

With picture perfect weather, more than 100 drivers representing the largest group of UTVs in Mint 400 history, took the start early on the 300-plus mile race. The three-lap event was run in the desert and hills between Primm, NV on the California border. The course was universally lauded as one of the toughest in recent memory, but Guthrie jr and his Polaris RZR Turbo was tougher. 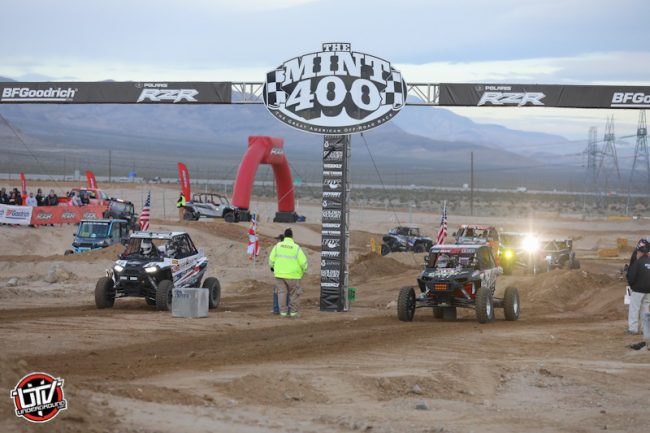 Taking the lead at the start, he held nearly a 30-minute minute lead toward the mid-point of the race. With only minor issues, his crew made quick work on his pit stops and led him to the dominating victory.

“My plan was to get the holeshot and get away from everyone else so I could drive my own race. That’s what we did and it worked out for once,” said Guthrie Jr. “I got a flat coming into the pits and it took a brake line, but after a five-minute pit stop we were good to go. What my machine got through today really shows how awesome my sponsors are to put this thing together. I have the best crew out here. I drive the car, but they are the ones that keep the car going.” 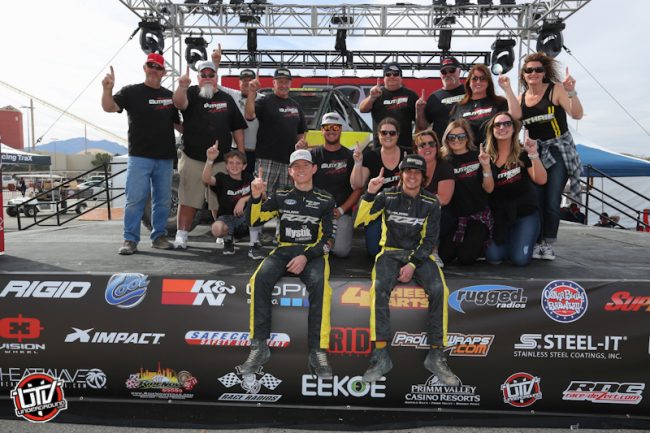 The Murray Brothers added to their impressive tally of success in the Mint 400 driving a Can-Am Maverick X3. After starting ninth, they were up to third on the second lap and ran a smooth race from there. Though fueling issues slowed their charge on the final lap, they hung in to for the runner-up finish.

“We had the intent to take third by the second lap and we stuck to that plan,” explained Derek Murray. “We just ran smooth and steady all day. The car wanted to go faster, so we’ll push a little harder next time. We always want the win, but one little thing will take out these days. Out of a 110-plus cars we finished second, so we’re proud of our team and proud of the Can-Am X3.” 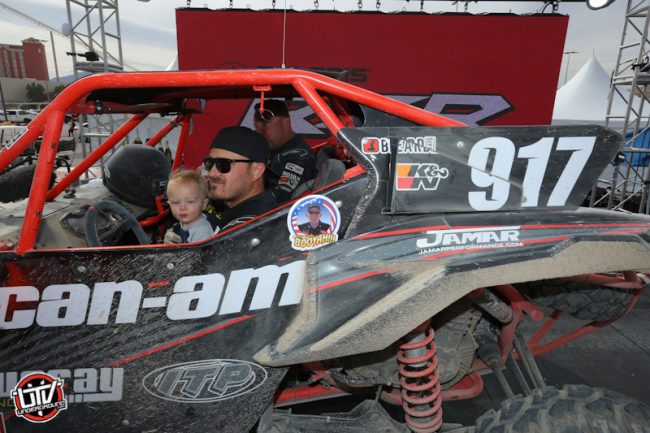 Jason Murray was quick to note that, aside from the rollcage and certain safety items, their Can-Am is running just like it left the showroom floor.

“We’re happy to be here and put the Can-Am X3 on the box,” said Murray. “This is a stock platform and it’s pretty impressive to see what these machines can do with a stock suspension, stock drivetrain and stock engine.”

Ellstrom was running just his second BITD race and his first in the Pro Turbo class. Driving a Holz-built Polaris RZR Turbo, Ellstrom won the Unlimited Class at last year’s season finale and backed that up with a third-place finish here. Though he lost a belt on the first lap, his crew quickly got him going again. 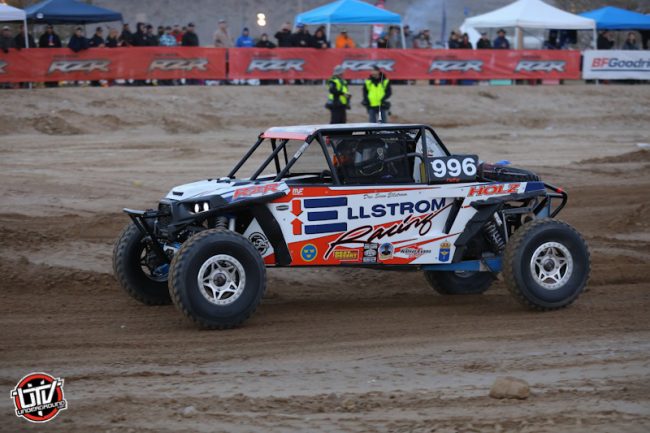 “The car ran solid,” said Ellstrom. “We have to work on a couple clutching problems, but other than that the car is super fast. I couldn’t ask for a better car…this is the best car out there. The cars just beat the heck out of the course as the race went on, but my RZR just powered right through it. Third place in class makes me proud.”

Martinez switched to a Polaris RZR Turbo this year after winning the Unlimited class in a Can-Am in last year’s Mint 400. He was impressed with the new ride and his fourth-place finish in the Pro Turbo class. 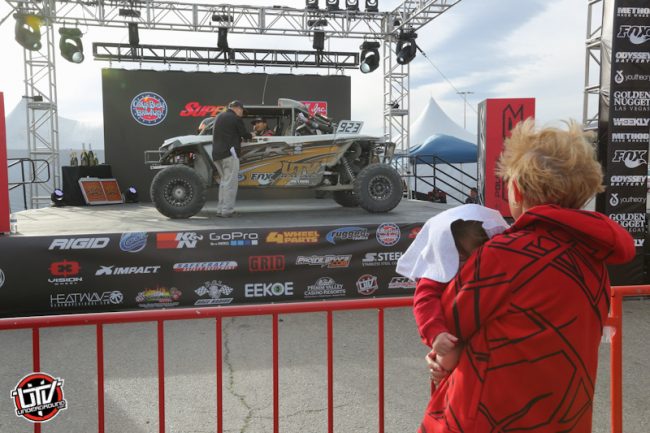 “The Polaris RZR was all that today,” said Martinez. “These RZRs are something else. We stepped up with the program this year and the car is just badass. We had a blast. We’ll have a new car ready for the World Championship. We’re hoping to kick it up another notch and chase some points.”

Gastel was driving a brand new Can-Am Maverick X3 here. In fact, the car only had about 400 miles on it prior to the event. Consistency is key for Gastel and he’s glad to find more speed and better results as he continues to get acclimated to the new ride. 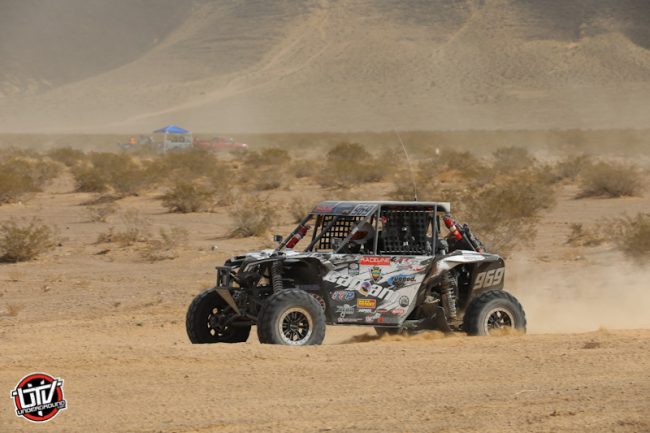 “Every race, we learn something new and make it faster,” said Gastel. “The course was a lot rougher than I remember from last year. The X3 is a lot faster in the rougher stuff and the small chatter due to the rear suspension. The added power and the longer wheelbase–the total package–is so much better than last year’s Maverick.”

In Pro Production, Poelman overcame a crash right after the start to net the class victory. Poelman was racing his dad, Ryan, out of the start and overcooked the first corner, flipping his ride. He ran a clean race from there to record his first ever BITD victory. Kristen Matlock finished second for the second consecutive year. 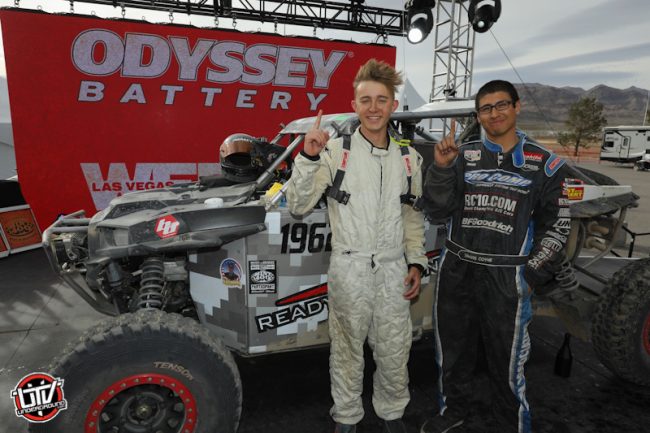 “I was racing with my dad…I got ahead and then I got on my head,” laughed Poelman. “I was too happy about beating my dad off the line and the turn was a little sharper than I had anticipated. That was the only mistake we made; no tires, no belts, just a clean run.”

Matlock overcame the rough conditions to earn her second consecutive Mint 400 runner-up finish. After starting 10th in class, she worked her way through the field to claim the honor. 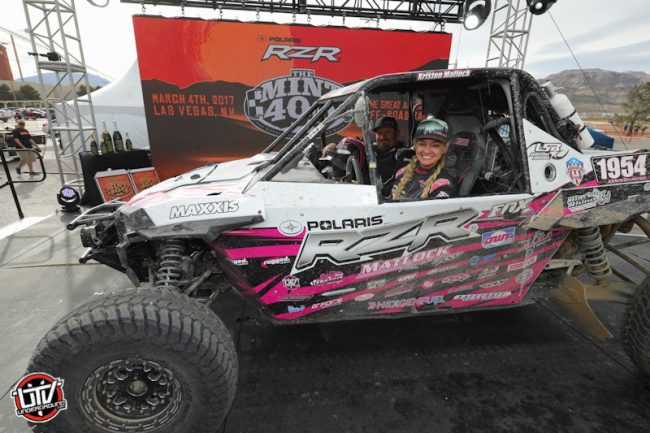 “It was a rough course and we kept trucking,” said Matlock. “I picked my way through the pack pretty quickly in the naturally aspirated class and I had to pass a few turbos, as well. We had no issues today. The course just kept getting rougher as the race went on.”

The next race for the Best in the Desert Series is the Polaris RZR UTV World Championship. That race is scheduled for April 14-15 in Laughlin, NV 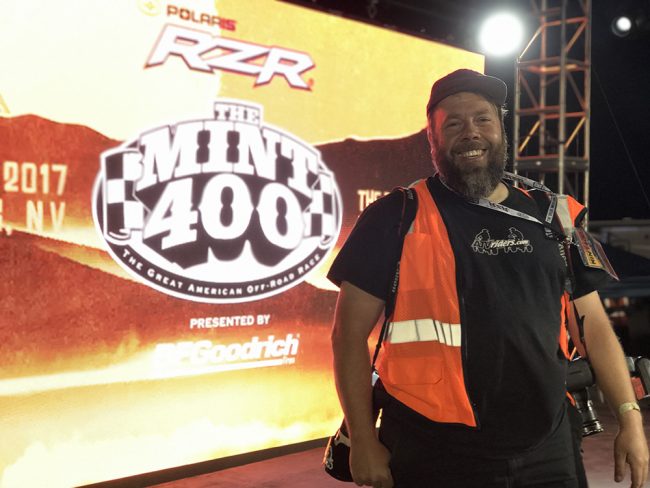 Mitch Guthrie had over a half hour lead at pit A on the 2nd lap, talk about a ass wooping
45th year racing Vws and still love it!!

harleys dad said:
Mitch Guthrie had over a half hour lead at pit A on the 2nd lap, talk about a ass wooping
Click to expand...

The rest of the field was pretty tight
I see a Yamaha podium-ed in the 1900 class.
Great for them.