Australia's biggest off-road race is going down this weekend. Pretty cool to see Harley Letner competing for the overall.

Any other American's headed down to race?

This year’s (2017) Tatts Finke Desert Race to be held from June 9-12th and will be the forty second (42nd) occasion Australia’s greatest desert race has been held. 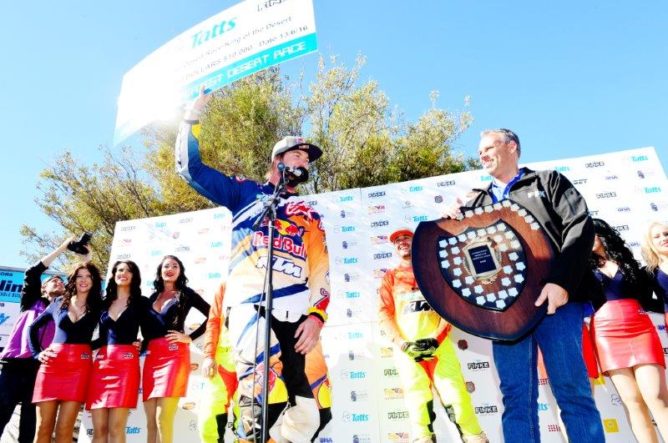 Significantly it is also the 30th time that cars have competed in the event that has its origins as a bike only affair known as the “There and Back” race dating way back to 1976. While 2016 Dakar winner and five time Tatts Finke Desert bike race winner Toby Price won’t be tackling the grueling event on his KTM this year as a result of not having fully recovered from injuries sustained in this year’s Dakar, he has entered in the Extreme 2 wheel Drive class in the #487 Geiser Trophy Truck Chevy 6000cc machine

Of special interest will be the Finke debut of American off road superstar Harley Letner, a two time Baja 500 winner and currently un- defeated in the 2017 US Best of the Desert Series. Matt from Jimco is supposed to be down there racing a "Class 1" from what I saw on Insta.

This race should get more coverage up here. This race is the big one for them and garners a lot of attention.

As Toby Price gets more 4 wheel time he is gonna become a hell of a contender in anything.

He's not driving his current Class 1 is he? If he was, yeah, competing for the OA.
Tim Morton

ive done a few minute video preview. available for everyone to see here

Our Ox Motorsports brother Damon Stokie is also giving it a go, Good luck to all!
M

Yes - we want to do more coverage of international events like this. Working on it!
Buy the ticket, take the ride.
Hunter S. Thompson

With just a few days to go before the start of the 2017 Tatts Finke Desert Race reigning bike ‘King of the Desert’ Toby Price concedes that the build up to this year’s has been less than ideal.

Price, who remains tied with record holder Randall Gregory with five Finke wins in the motorcycle division, is not competing on two wheels this year as a result of not being fully recovered from injuries suffered at this year’s Dakar event.

However, he will be at the iconic Finke event with this year’s aim being an overall win and Extreme 2WD class win in a Geiser Brothers built Trophy Truck.

Following the challenges of sourcing a Trophy Truck on Australian shores, Price and his team have been able to air freight a Trophy Truck from the United States of America just in time for the event.

Talking today Price reflected on his chaotic build up to the event:

‘There’s been a lot of chaos around the Finke Desert Race. The original plan was to ride the bike and drive the truck again, but unfortunately my leg isn’t quite ready for the strain on the bike. I didn’t want to miss racing at Finke so we got our hands on a Trophy Truck out of the United States. It’s been a long process but we’ve put the pieces together. Owlpine Group has managed to pull it all together for us and fortunately we will get to the start line for Finke on 4-wheels.I would like to give a massive thank you to all the sponsors that have come on board to make this happen for me’.

Price, who ‘did the double’ at last year’s Tatts Finke Desert Race won on his KTM in the bike division and finished second outright in his inaugural 4 wheel drive Trophy Truck drive.

The Tatts Finke Desert Race will be held from 9-12 June 2017.
Buy the ticket, take the ride.
Hunter S. Thompson

Harley Letner of Youtheory Racing an American Extreme Athlete will be traversing the globe again in 2017.

Two continents, Three Countries and Three of the most prestigious offroad races in all the world within a months time could only be done by one man the "TT Destroyer" himself Harley Letner. To compete at such high levels in the offroad racing game definitely takes a toll on the body and mind. Harley Letner relies on Youtheory's Turmeric, Mens Collagen and Mens Revive to replenish his body and mind after such demanding activities.

Harley will again be a top favorite competitor at the BITD Laughlin Desert Classic the second week in May in beautiful Laughlin Nevada. Harley Letner is the last one to dominate on this track at the recent SNORE Rage at the River back in December and this will set his month up to dominate offroad racing around the globe.

He will have one week after the Laughlin Classic to prepare to race in three countries and two continents in as many weeks with the second being the legendary Baja 500 a SCORE loop race in Ensenada Baja California Mexico. He has participated in this race more than ten times in his 33 years and successes abound. The unique draw to this particular race for Harley Letner and his thousands of followers is this will be the first time competing in a trophy truck.

The week following the completion of the Baja 500 HL immediately travels to the land down under to participate in one of the most prestigious offroad races in all the world the Tatts Finke Desert Race. HL has partnered with Australian Extreme Sports Athlete Luke Ayers. Luke Ayers has close to 10 years experience racing in various offroad venues and classes in Australia and is no newcomer to the podium having won the Finke in class and the Extreme 4WD Australian Championship in 2015. Luke Ayers campaigns a familiar ride to HL in the ole Tatum or "Tatey" some have nicknamed the former Class 1 car the Letner family campaigned in the US for many years. Luke has combined with Harley Letner in this years race as there isn't a better person to learn from how to push the Tatum to its limit. Ayers Signs of Brisbane is a huge supporter of Lukes endeavors, as well as Hercules Tire, Fataz Competition Engines and All Four x Four Parts

Harley arrives in Australia the first week in June to compete in the Tatts Finke Race and will be headlining and promoting the Ayers Signs, Hercules Tire, Fataz Competition Engines, All Four x Four Parts,Offroad Cartel, Youtheory Racing Tatum #59 in the unlimited class. The Tatts Finke Offroad race is a multi-terrain two-day race for bikes, cars, buggies, trucks and quads through the desert country from Alice Springs to the small Aptula (Finke) community. The race held each year on the Queens Birthday Weekend in June "Finke" as it is commonly known, is one of the biggest annual sporting events in the Northern Territory and has the reputation of being one of the most remote places in the world. Finke is unique and the most fun you can have with your helmet on.
M Travis Robinson was first away this morning from the Alice Springs start after having prologued in first position yesterday. He was never challenged today for the 226 kilometre journey completed in a time of 1 hour 48 minutes and 44.6 seconds.

Second into Finke was the son and father team of Shannon and Ian Rentsch in their #33 Jimco Buggy Nissan 3500cc with a time of 1 hour 51minutes 58.4 seconds. one line dusty course where average speed is OVER 75mph=ALL ABOUT QUALIFYING....but yes, i would like to go do it.....in a 4wd tt....
I RENT trophytrucks and bajalite trucks for all races in north america...BAJARACINGADVENTURES.com

226 km one way and 226 km in the reverse direction the following day, Ruff course and yes the dust made it all about the qualifying this year.

Who does an arrive and ride dirt bike deal for this race?

dirtdrifter said:
226 km one way and 226 km in the reverse direction the following day, Ruff course and yes the dust made it all about the qualifying this year.
Click to expand...

That is still a short race. Not even 2 hours for the lead vehicle to finish. Australia has a lot of desert. I always thought this race was comparable to the Baja 500 of V2R, just split into two days.

JDDurfey said:
That is still a short race. Not even 2 hours for the lead vehicle to finish. Australia has a lot of desert. I always thought this race was comparable to the Baja 500 of V2R, just split into two days.
Click to expand...

its actually more like one lap of parker, then another lap the other way the next day......after it hasnt rained in a month......without huge gaps at the start line, picking the winner would be pretty easy....
I RENT trophytrucks and bajalite trucks for all races in north america...BAJARACINGADVENTURES.com
Share:
Facebook Twitter Reddit Pinterest Tumblr WhatsApp Email Share Link
Top