Some of you know me, some of you don’t. I am a retrieval volunteer with Snore, BITD, and occasionally race sometimes myself. My names Robert Campbell, I broke my back on a motocross track in 2015 and ended up paralyzed. After a year on the sidelines I wanted to be a part of racing again and started volunteering at the races. Me and my girlfriend Chyenne have a lot of fun, flipping trucks over, and just helping out as needed.
Figured what better way to show how much fun you can have working races then to post about it, show some pictures of what we get to do and what a day is like in our shoes!
This race started off with action not even 5 minutes Into the day, In the first turn, 500 feet off the start we had truck #6100 roll.
photo from bob bowers of the rollover, video of us flipping him back onto four wheels was from Chyenne. Once we got him back on four wheels his crew came out from main pit, gave him some oil and he was able to continue on. 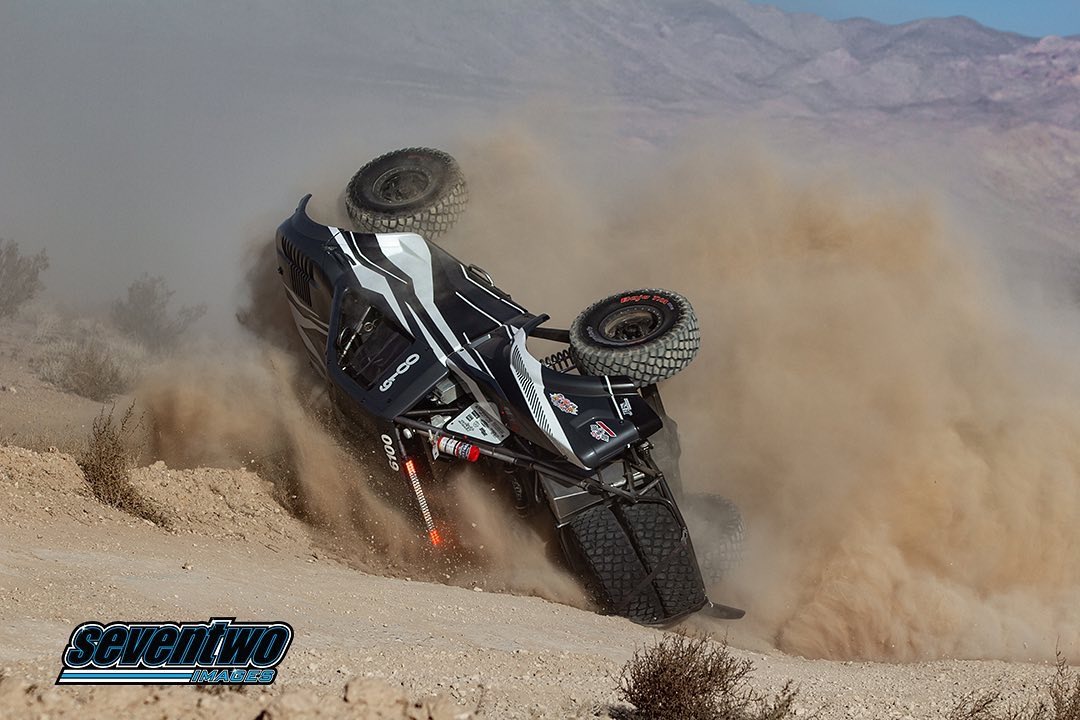 We loaded up some signage after, and went out to pit A to drop it off. Meanwhile someone was Richard Craniuming the main channel and race chatter went silent. Somewhere in the middle of it I heard there was a huge crash at mm55-56 and we needed to get there ASAP. So we high tailed it there as fast we could, to find the peoples racing #69 absolutely wadded. When we pulled up we didn’t see any movement so Chyenne ran across about 1/8 mile of desert to check on the occupants and when she got there.... there was no one there. Well with the radio comms being tied up we couldn’t hear another truck in the area had helped them out already. All good, we got back in the truck and went along our way. 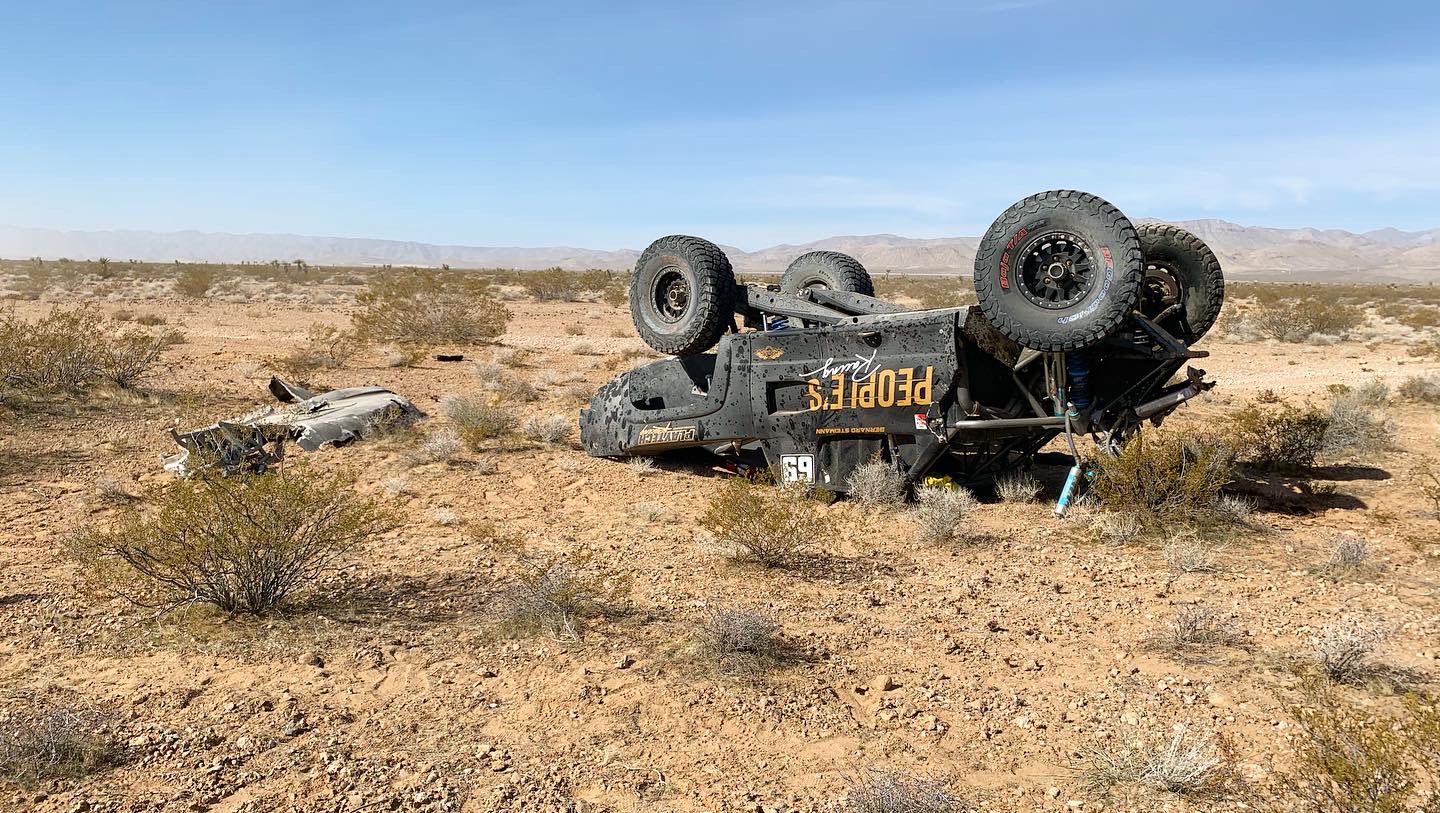 next call we get, is a cell phone call from a friend working a pit, his driver in a ten car has possibly broken his back making a pass and needs medical. At the same time they code red the race channel and the stuck mic went away. We aren’t medical, so we let the let the medical team handle that on. He is in the hospital and doing okay. I wont say names for sake of family.

next phone call, a 1450 truck broke a spindle half a mile after the knight ranch road road crossing. We head out and check on them, they get the spindle off before we get there and we take them to the pits to drop them off to weld it up! 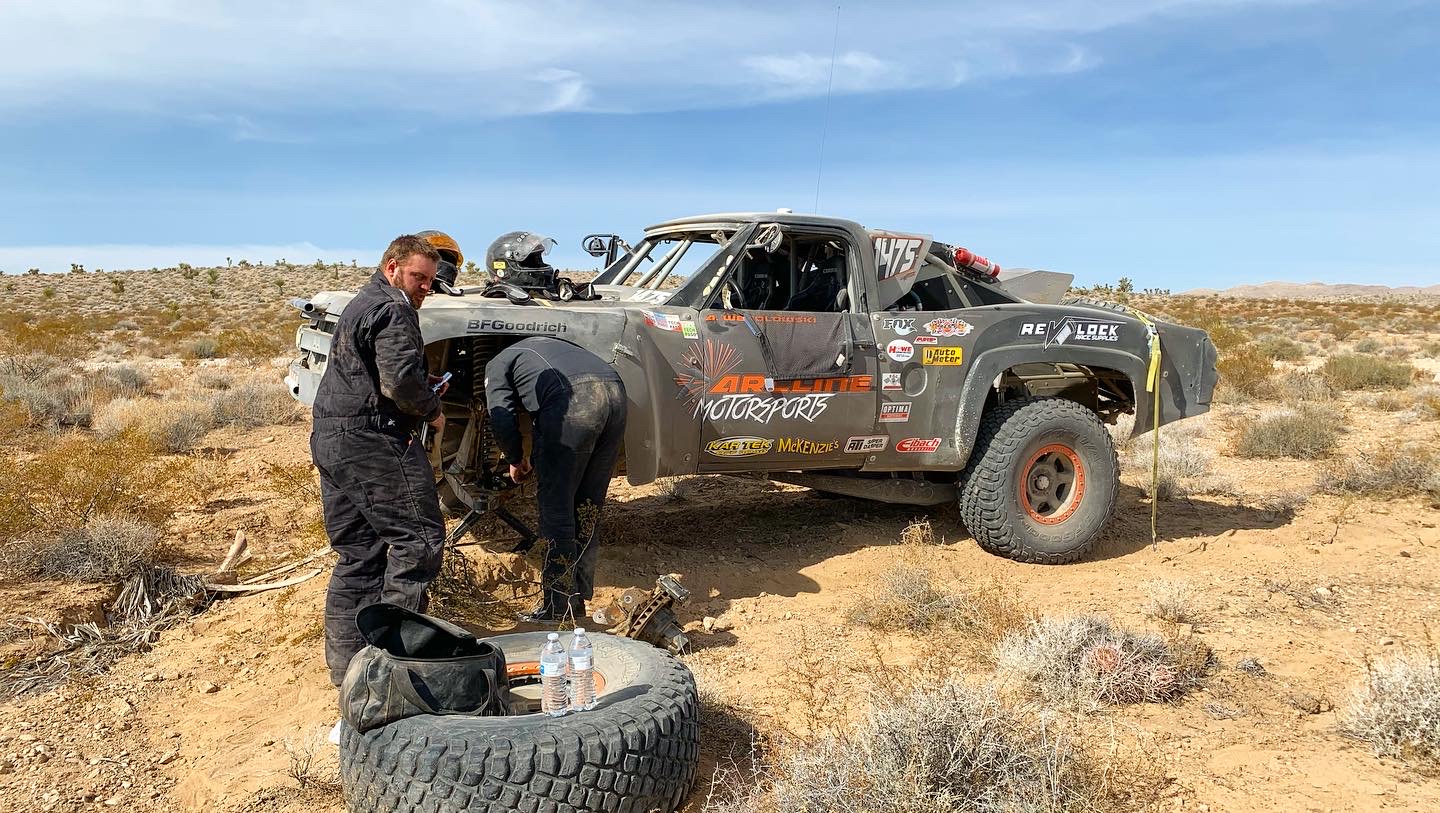 while we wait we decide to drive out and watch some racing down knight ranch road testing section whoops.
We see Amanda sorensens new trophy truck broken on a trailer coming in, and a class 12 with the front wheels looking like a V 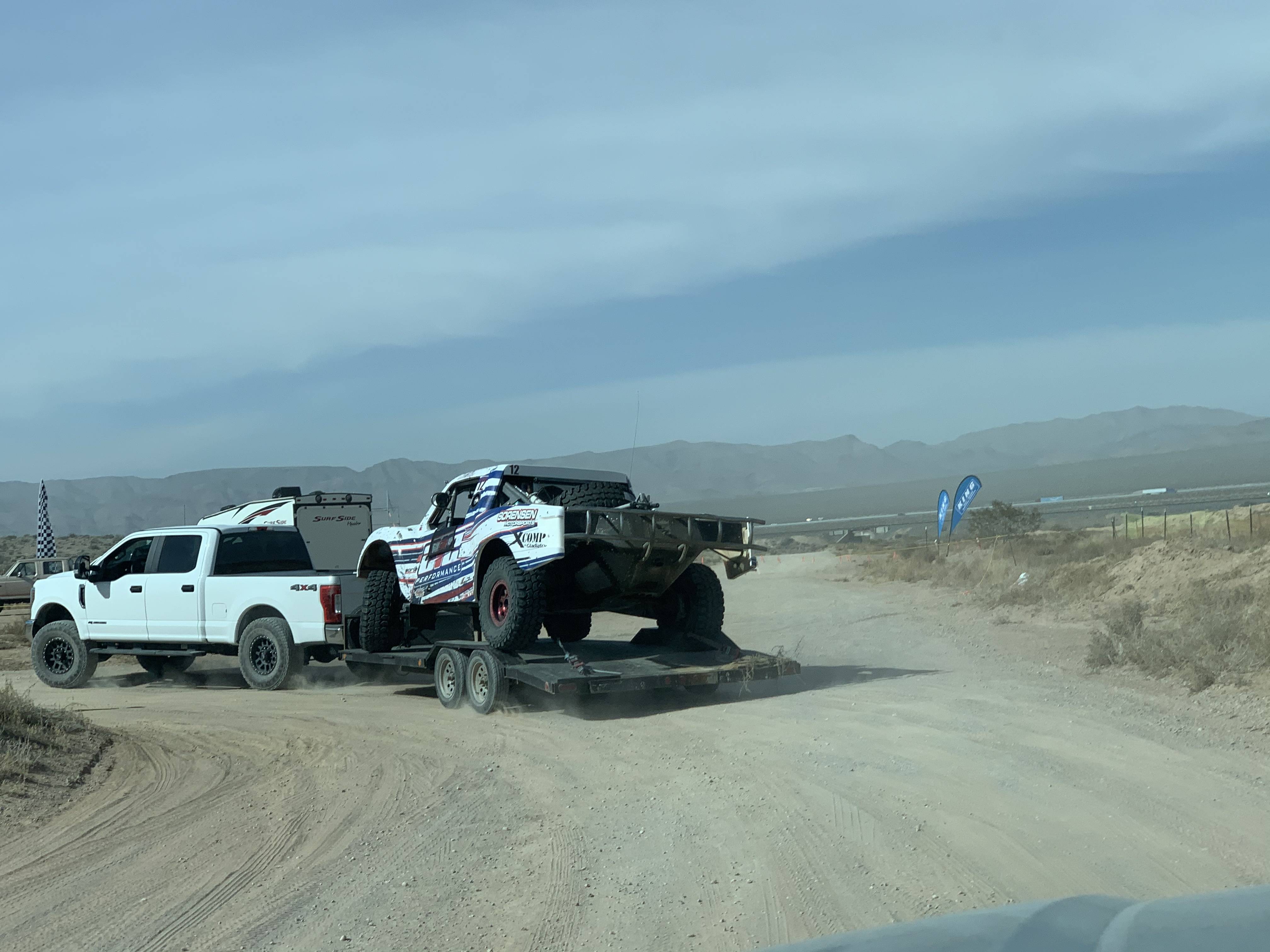 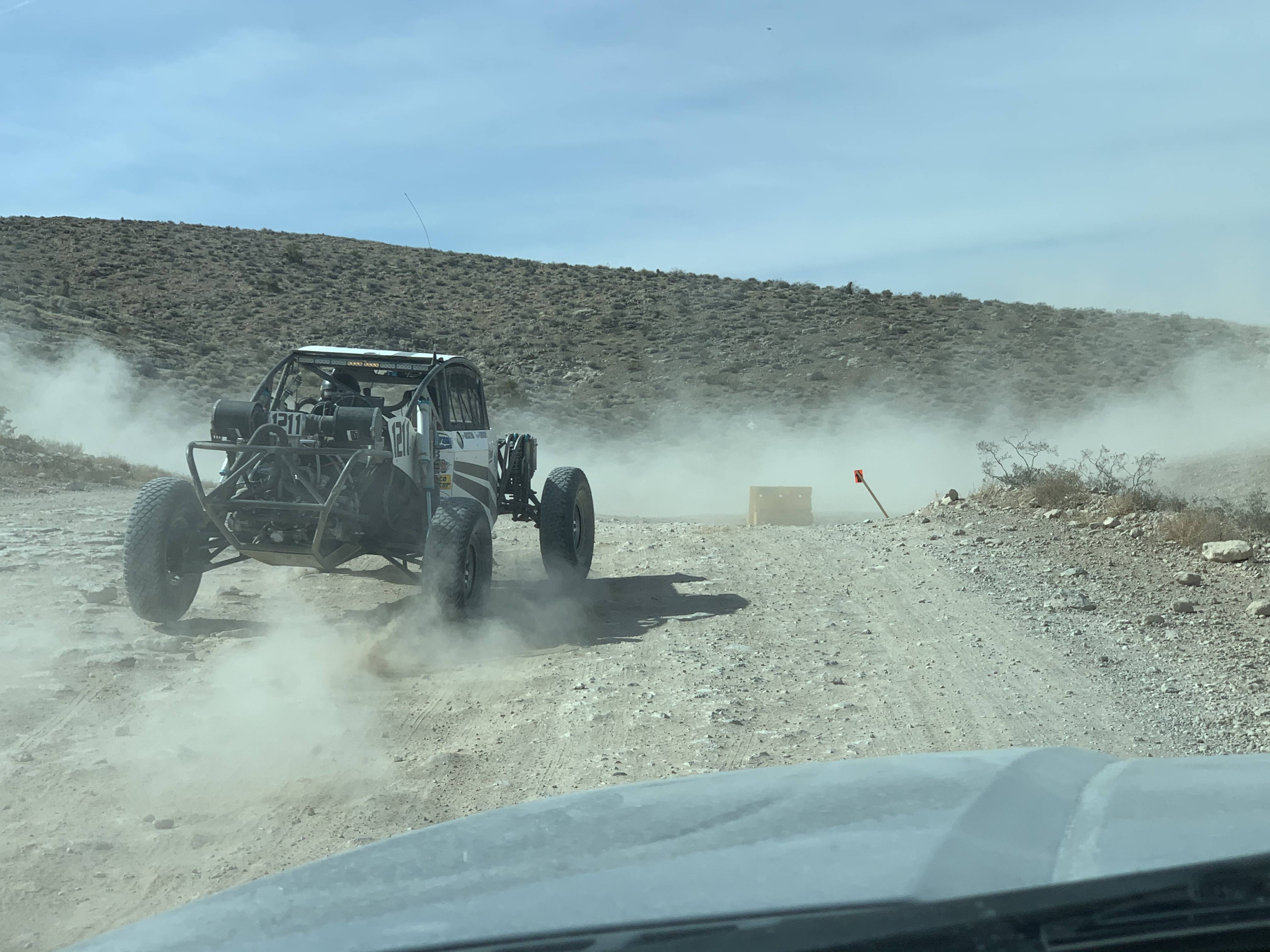 Phone call comes in, 1450 guys got their spindle fixed and we take them back to their truck. They get it back together and limp it to main pit and call it a race.
Next call, checkpoint 11 says a class one has broken a mile from him, right around where the #69 had crashed earlier. So we go off in search. Find the car with a missing trailing arm bolt that let the trailing arm go back and the CV to punch out of the hub. Using my ghetto modified Big wheel jack and some ratchet straps, a hi light jack from another retrieval volunteer, and some enguiniety they got a 1/2” extension in place of the broken bolt and attempt to limp it to the finish line. 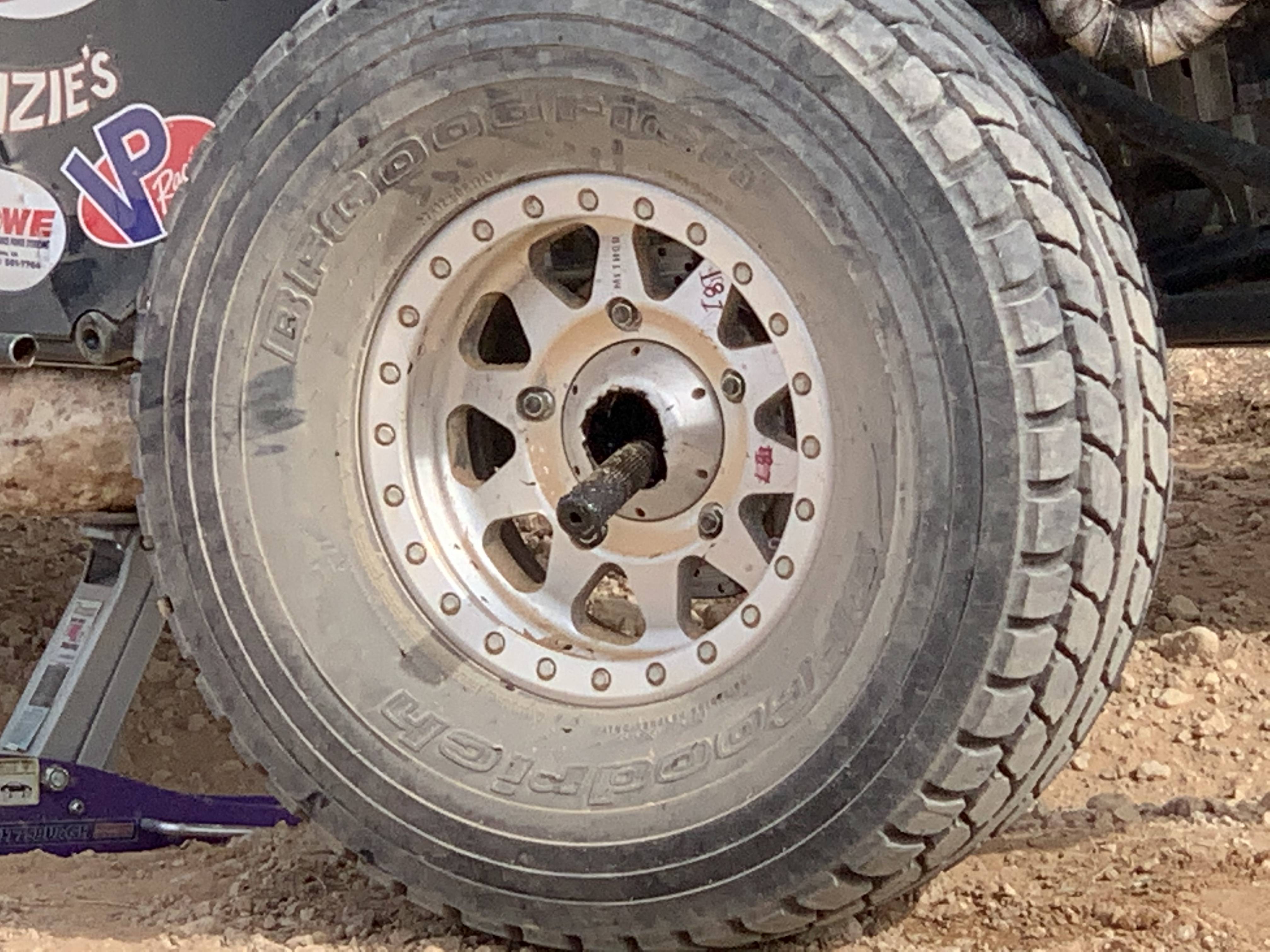 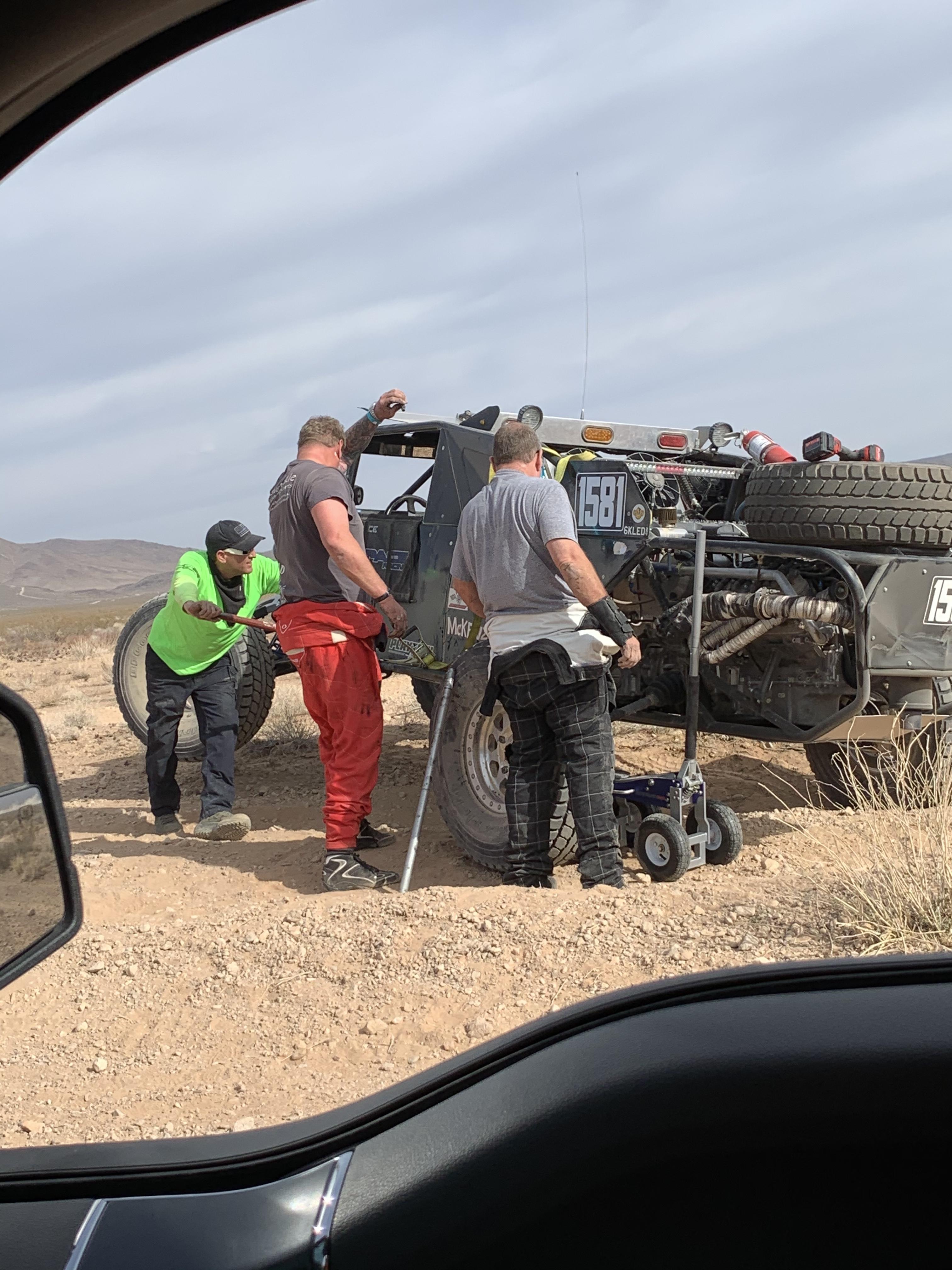 now here’s where things go bad. Derek Bradley in the #1410 is on his last lap, this buggy is broke in between 2 of the 3 available race lines in this area. Derek being a good sport, and long time volunteer and board member of snore chose the far away line and slows down to give us room, and finds two of the biggest cross washes on the course. One of them pops him up, and lands him perfectly into the second one. It sends the truck a good 10-15’ in the air and he lands front bumper first, bounces, hits the rear bumper, twists and comes to a stop on all four. Before the second hit I was already calling code red on relay/ wxman channel to stop all the checkpoint radio traffic. They come to a stop facing us, dust clears and I don’t see anyone moving. As we rush to get close they both give us the thumbs up. I call off the code red, and call in everyone as okay. One of the gnarliest crashes I’ve ever seen in person. Just the violence of the first hit. I’m so happy they are okay. 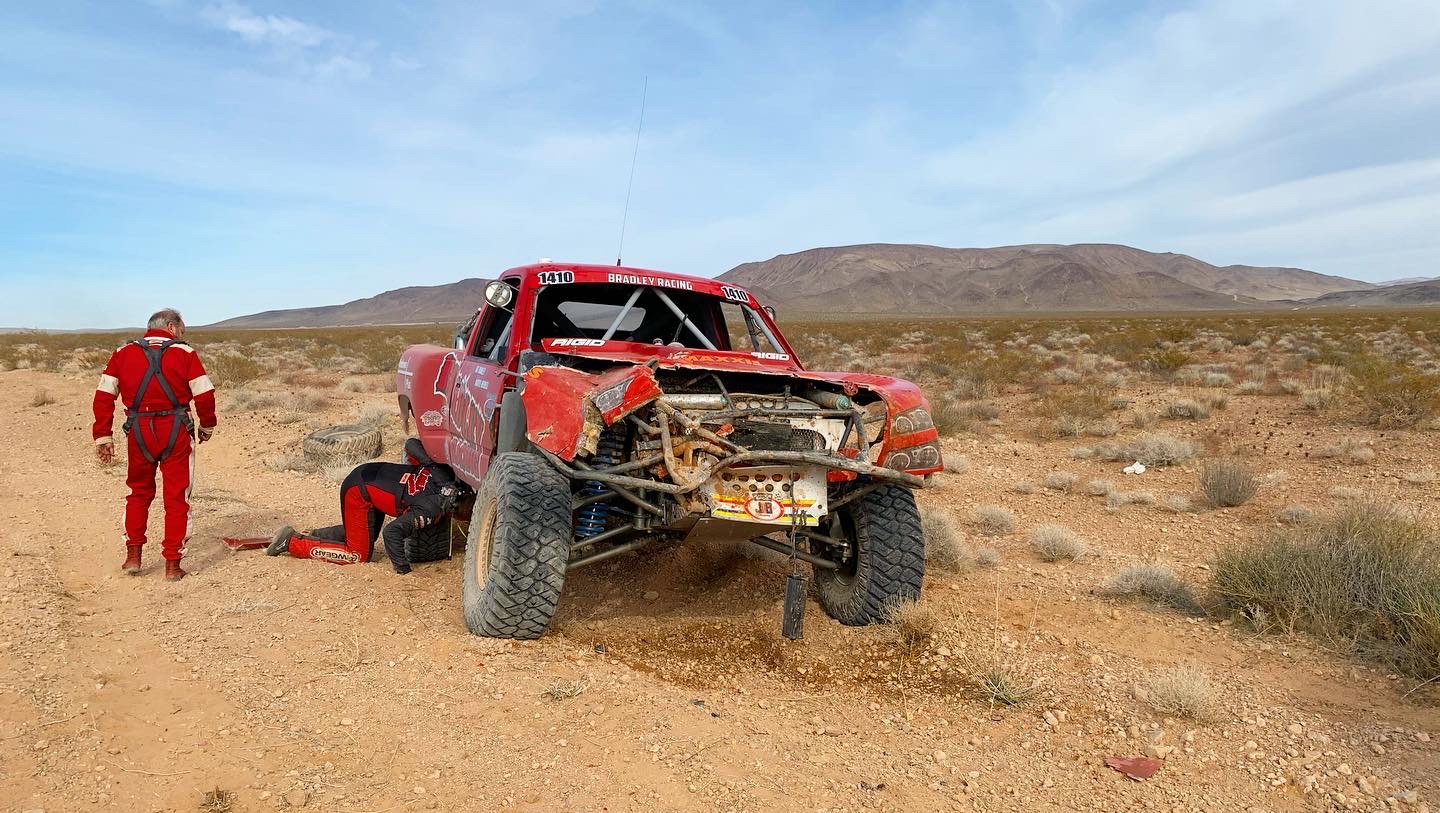 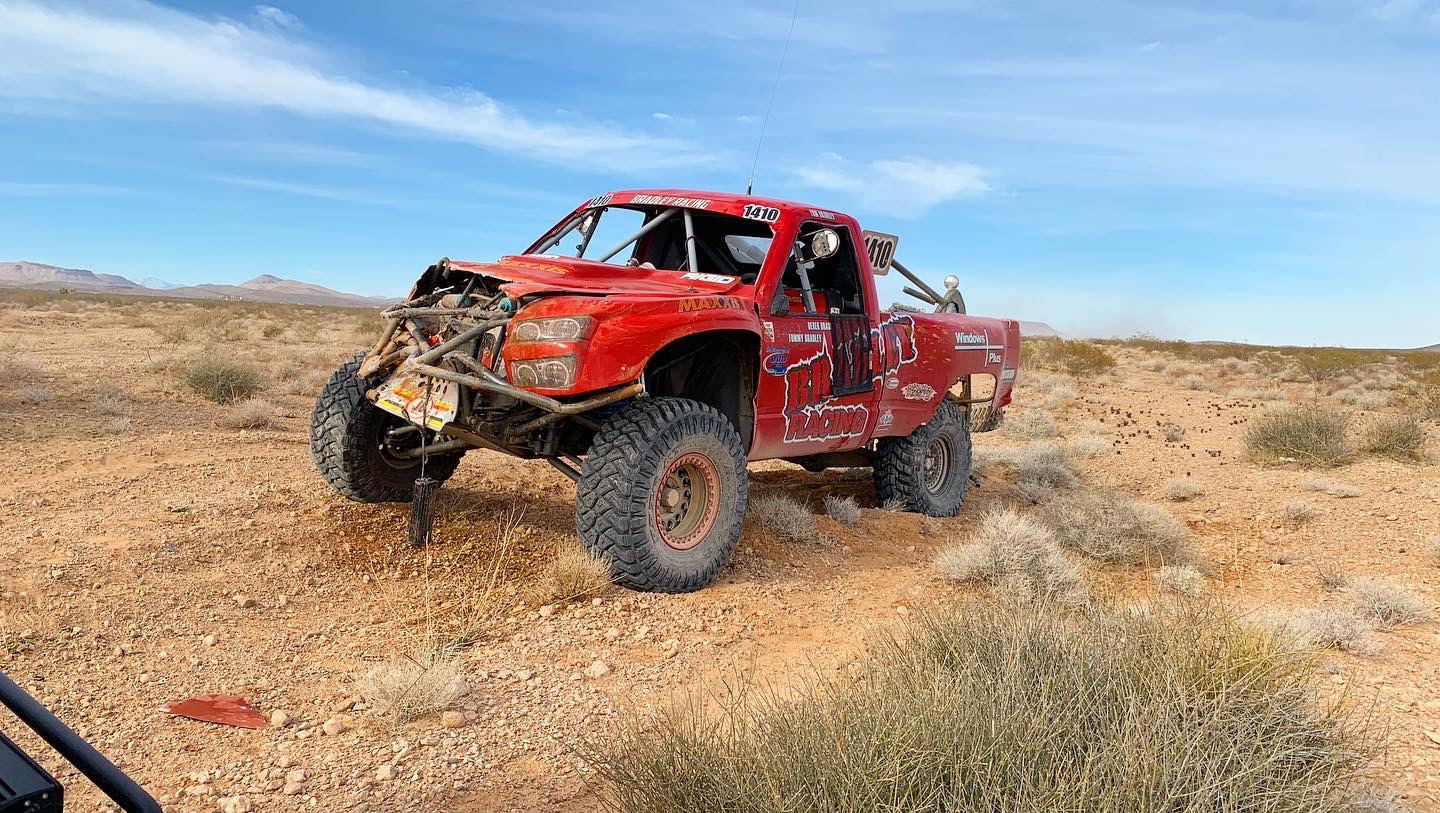 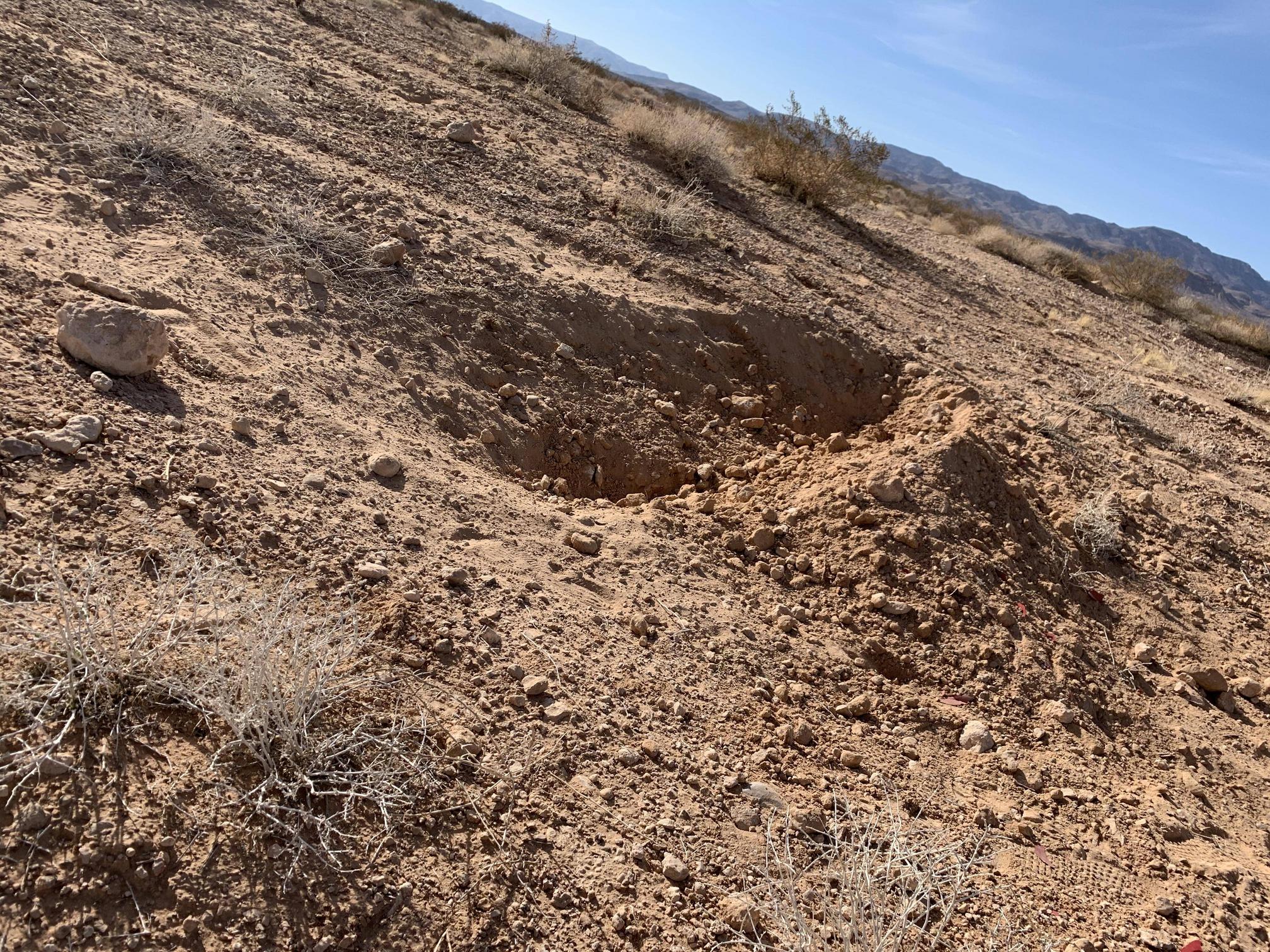 We spent the rest of our day helping get these guys out. Thanks for reading my blabbering everyone, if you guys like it let me know and I’ll post more from future races. It was a very hectic day for everyone, but overall it was fun! Thanks to all the other volunteers and all the racers! Sometimes it’s a thankless job, but in the heat of the moment I get It. Next race is the mint 400, then I’m trying to race my hand controlled RZR at the Caliente 250 if I can get it together in time!

Also big time thank you to tactical recovery equipment in Las Vegas for the amazing ropes and soft shackles, and to USActiontrax for helping us when we get stuck! And also Motorsports safety solutions for everything he does to help us out. Wouldn’t be possible without him.

Here’s unofficial results for the weekend

Great report of the race from your view! Keep them coming.

Robert, you need to get a GoPro sponsor and start a blog series...behind the scenes with the recovery guy, lol. I'd watch that stuff!
TaxPayer Funded Racing
http://www.facebook.com/username#!/TPFRacing

Love this report, thanks for posting. Cool to see and hear what it’s like for you recovery guys.

And thanks for being out there ready to help.

J Prich said:
Robert, you need to get a GoPro sponsor and start a blog series...behind the scenes with the recovery guy, lol. I'd watch that stuff!
Click to expand...

You know, I’ve thought about it before. But some days it’s really boring. While others it’s crazy.

Mint 400 last year was absolute insanity, we watched 10 rollovers in the same spot. Added signage, and they still kept coming in hot and rolling.

MTPyle said:
Love this report, thanks for posting. Cool to see and hear what it’s like for you recovery guys.

And thanks for being out there ready to help.

Thanks Mike! The forum needs more organic content, I’m happy to contribute. Love your write ups as well. You are filling in the gap Johnny Angal left us with when he stopped racing!

Totally agree rcamp this is great content. Thank you for posting.

Awesome thanks for your time. Caliente is a fun track hopefully you get your car together
yeeeee

Thank you so much for what you do!! You guys are awesome!!
NICK ISENHOUER

EMS702 said:
Your Laughlin report should be good. Always action there.
Click to expand...

We will see if I make it out this weekend. Might be sitting it out.

Bro-Dozer Motorsports said:
Thank you so much for what you do!! You guys are awesome!!
Click to expand...

Of course. Excited to see you guys at the mint

Thanks for all your time and help!! Yall rock!!! And just think, this is the story from just one of the retrievals we had out there. Great report Robert, you should do this every race!!! Robert is one of our trusted Volunteers that goes out and tears up his own truck, spends his own gas/lunch money, just to come help all the crazy racers! THANK YOU ROBERT and CHEYENNE!!!!
https://www.facebook.com/CJHUTCHINS1527
Follow me on IG CJ_Hutchins

Thanks Robert for coming for us, and sorry we couldn't let you know over radio that we (#69) had been recovered. The saving grace for us was that one of our guys had put a cheap $100 GPS tracking device inside the cab last minute, just so he could watch our position and speed from a phone app. This in fact lead to our very quick recovery, as the guy who installed it just jumped in our truck and went to get us ASAP.

The device was an Americaloc GL300W. Uses a sim card. May not work well without cell reception. maybe its common knowledge, but man, for the price, this could be a life-saving device in a big open desert. Not to mention good for pit crew and fam who want to follow along anyway. Costs 228/year, or $38/race. Or use it to spy on your kid..

Anyhow, I just thought I wold mention the benefit this thing gave us when no one else could find us easily.. maybe there is something even better, just happened to work for us this time.

Thanks again to you and the rest of the volunteers and workers for this event, I know it was a bit short staffed.

I wish we could have had more experience with this course to know better on that straight were we lost it on that G-out. We sailed through the one before it. Hard lesson.. and avoidable with more caution/less speed on a long (if not "boring) straight that we were going blind through (no pre run, no GPS markings). Yea we saw the arrows, but what we probably needed was Skull and Bones. I know its what, 4 lanes wide there? can't mark it all.. hopefully we will be back together before Primm.

Another shoutout to Patrick in #188 for stopping immediately and hopping out to help.
#69 TT Peoples Racing

Rcamp99 said:
Thanks Mike! The forum needs more organic content, I’m happy to contribute. Love your write ups as well. You are filling in the gap Johnny Angal left us with when he stopped racing!
Click to expand...

Thanks for posting! You definitely had a busy day. And yes please post more from future races.
dezertpeople.com
offroadaction.ca

Rcamp99 said:
Of course. Excited to see you guys at the mint

Hopefully we see ya but dont need ya!!
NICK ISENHOUER

Bro-Dozer Motorsports said:
Hopefully we see ya but dont need ya!!
Click to expand...

That’s always the goal! But if you do, well be there for yah

Curtis Guise said:
Thanks for posting! You definitely had a busy day. And yes please post more from future races.
Click to expand...

Will do! Didn’t know if my stories would be boring or not