never said I knew more than everyone. But ok.

my wazzzu fuel pumps? What does that mean? Not sure you heard but our problem was not the fuel pumps. It was the wrong Holley Fuel Hydramat with -6 fittings. But hey I guess you already knew that since you know everything. Gosh.

tried to give some love on that delete, ill give the love here instead

MTPyle said:
I totally agree Luke made a risky move. When I saw it I thought oh no, that’s not good. But I honestly did not think it would be a DQ event.

I am not arguing that it was a poor choice. I just don’t think it was a DQ when we had permission. You have no idea what was communicated between the people and Luke. The camera angle does not show what Luke saw. I would be willing to bet he thought he had permission.

I'm not convinced there was any communication possible between the driver and the spectator other than a thumbs up, or similar hand gesture. With 800 hp idling and a full face helmet with air being pumped through it, they couldnt hear or understand each other even if they were speaking the same language. Anyway, a spectator giving a racer permission to do anything race related would have no merit to the competition review board.

I need to get back to work and stop being on here. Haha it’s so easy to get sucked in, I am weak.

this has been fun though. Can’t wait for Fish’s recap. It will be interesting for sure.

Just a little more thought here, Lukes truck has a sequentual in it with a convertor, To put it in reverse you have to shut the engine off first. Whats the number one rule of a race car during a race? "Never shut a running engine off". Hes running within seconds of Andy for the overall close to the finish, the last thing he wants to do is shut it off, shift to reverse, turn around, shut it off again, goto first and go.

So his best option is to hope the guy moves the tent like he started to do. I think his mistake was not waiting 5 seconds longer till the guy pulled the tent totally out of the way and he wouldnt have hit anything........

Just some more food for thought. Personally I think the DQ is rough and I would have just given him a penalty and not ended the season champions run right there.

fishd00d said:
Whats the number one rule of a race car during a race? "Never shut a running engine off".
Click to expand...

I have never seen that anywhere in the rule book.

I've just been sitting back and watching this thread unfold and the rational behind many different arguments. I am making NO judgement of Luke, I don't know him, have never met him, I respect him as a driver and personality of the sport, but like I said I don't know him as a human being. I have watched the video multiple times and IMO, one thing is clear, which appears to be in direct contrast to other comments I have seen here.

His body language clearly shows some level of confusion or intimidation from staring down a 900hp fire breathing monster, fear of being in front of the truck, not quite comprehending the fact a truck is about to drive through their camp (not making any judgement call here as to whether he should or should not have been camped where he was), unsure how to handle the situation it looks to me like his instinct was to try to move what he could to save his things from being destroyed. During these few moments, Luke is blipping the throttle, rocking the truck forward indicating he's coming through whether the guy likes it or not. Which I am sure contributed to this guys confusion and disbelief of what was about to happen.

Many have said this was a "split second decision" which was made by a driver. I disagree. There are thousands of split second decisions made by a driver during a race, this was not one of them. Luke knew he had missed the turn, you can see it in his slowing before the camp. When he got to the camp, he came to a stop and sat there for a few seconds (blipping the throttle) to get the guy to move his things. Plenty of time to process where he was, what his next move would be and react accordingly. A split second decision is when that car pulls out in front of you from the side requiring an immediate evasive maneuver, this was not that situation.

Some have talked about all the bad decisions/stupid things we have done over the years in Baja and to that I agree. However, just because we have made bad decisions in the past and gotten away with it, survived it, etc. does not justify additional bad decisions that worked out okay in the end. Too many stories over the years have had tragic endings. Hopefully this one, which only cost Luke a race, will serve as a his moment.

I think the obvious answer is to ban tents, gather into small groups and discuss.
Darren "KBFG 151.715 The Rock of Baja"
No moment is too big if you're prepared
E

critter81 said:
agree with that. Luke would have been best served using reverse.
Click to expand...

if Luke had reversed out of there he would be the winner right now
there is no doubt in my mind if he could do it over he would back out of that hole
stuff happens live and learn
Last edited: Jun 17, 2021
S

never said I knew more than everyone. But ok.

my wazzzu fuel pumps? What does that mean? Not sure you heard but our problem was not the fuel pumps. It was the wrong Holley Fuel Hydramat with -6 fittings. But hey I guess you already knew that since you know everything. Gosh.

Just poking fun at you....He He! Maybe I'm still mad you didn't hire me as your crew chief

DanMcMillin said:
LOL, he ain’t worth my time. Best you do the same.
Click to expand...

fishd00d said:
So his best option is to hope the guy moves the tent like he started to do. I think his mistake was not waiting 5 seconds longer till the guy pulled the tent totally out of the way and he wouldnt have hit anything........
Click to expand...

Well........"wouldn't have hit anything"......except a 2nd tent, a section of Plastic Fence and a Tractor Tire half buried in the ground (to denote a "wall")....hmmmmm
Swine Flu Recovery Counselor

If Jeff Foxworthy was reading all of this, he’d feel like a redneck

masleca said:
Well........"wouldn't have hit anything"......except a 2nd tent, a section of Plastic Fence and a Tractor Tire half buried in the ground (to denote a "wall")....hmmmmm
Click to expand...

If I were to give just a small thought to that placement of that orange fence next to those tents I would say the guy was being responsible ish and trying to keep his kids from meandering onto the corse directly from the tents. Personally I don’t care who’s name was on the side of the truck, We got lucky this time that it was only a couple empty tents. A DQ was a bit hefty but now a precedent has been set. Hopefully the next “split second decision“ will be a better one next time

Zambo said:
As long as we're getting all technical and stuff, I'd like to point out that if you take a wrong turn you are no longer on "the course." Therefore turning around and going back to where you messed up isn't going "backward on the course."

Now lets discuss the technical differences between tents and EZ up canopies.
Click to expand...

I was referring to the issues in my class 10 race. Not TT.

Seems some guys went pretty far off course to make it around some stuck trucks. We stayed put with some others near the front. Should have blown that popsicle stand and hit the paved road.

masleca said:
Well........"wouldn't have hit anything"......except a 2nd tent, a section of Plastic Fence and a Tractor Tire half buried in the ground (to denote a "wall")....hmmmmm
Click to expand...

It's hard to be the best in Baja. Luke is the current Score Trophy Truck champion.

Luke was just racing, he did nothing wrong, It´s racing never forget that.

There was no one in the tents, did you see someone running desperate to save a life there? No one spilled their beer to protect a kid. We only saw one man standing in the way. What a SCORE decision!

More importantly we can let these errors go… 800 or 900hp

Zambo said:
The line from The Hangover comes to mind: "You mean the drug dealer down at the liquor store wasn't a good guy??!!!"

ACTUALLY laughed out loud at this.

Okay, back to spectating this amazing thread from the sidelines. kris_r said:
Okay, back to spectating this amazing thread from the sidelines.
Click to expand...

Don't get too close to the action! 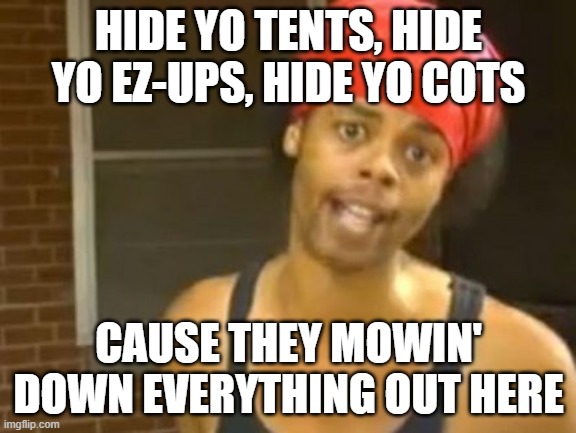