When the dust settled from our infamous Parker 250 crash, we immediately dove headlong into fixing our car so we could participate in the MINT 400. After all, this was the 50th Anniversary of the MINT 400! WE had to be there! The car was a wreck. Literally. We made a parts list and got on the phone trying to see what we could get in time. RT Pro stepped up big and quickly got us a full complete long travel kit to replace our wrecked arms! The front bumper was toast so I cut off the old bumper and started bending new tube. I decided to extend the front bumper a bit in case we needed to bump anyone, we would have a bit more wiggle room before kissing tires lol. I have been running the Super ATV Rhino 2 axles with no problems to date. Of course, the wreck was extenuating circumstances and 3 of the axles were destroyed. I ordered up a new set of axles, but in talking with Super ATV, they insisted on warranting the broken (3) axles! What?!? Now that is good customer service! We also needed to replace the steering rack, EPS unit, fender flares, front valance, lower a-arm mounts, sway bar arms, roof, lights, and a host of other items. The car came together amazingly, and I felt we were stronger, lighter, and better than before! 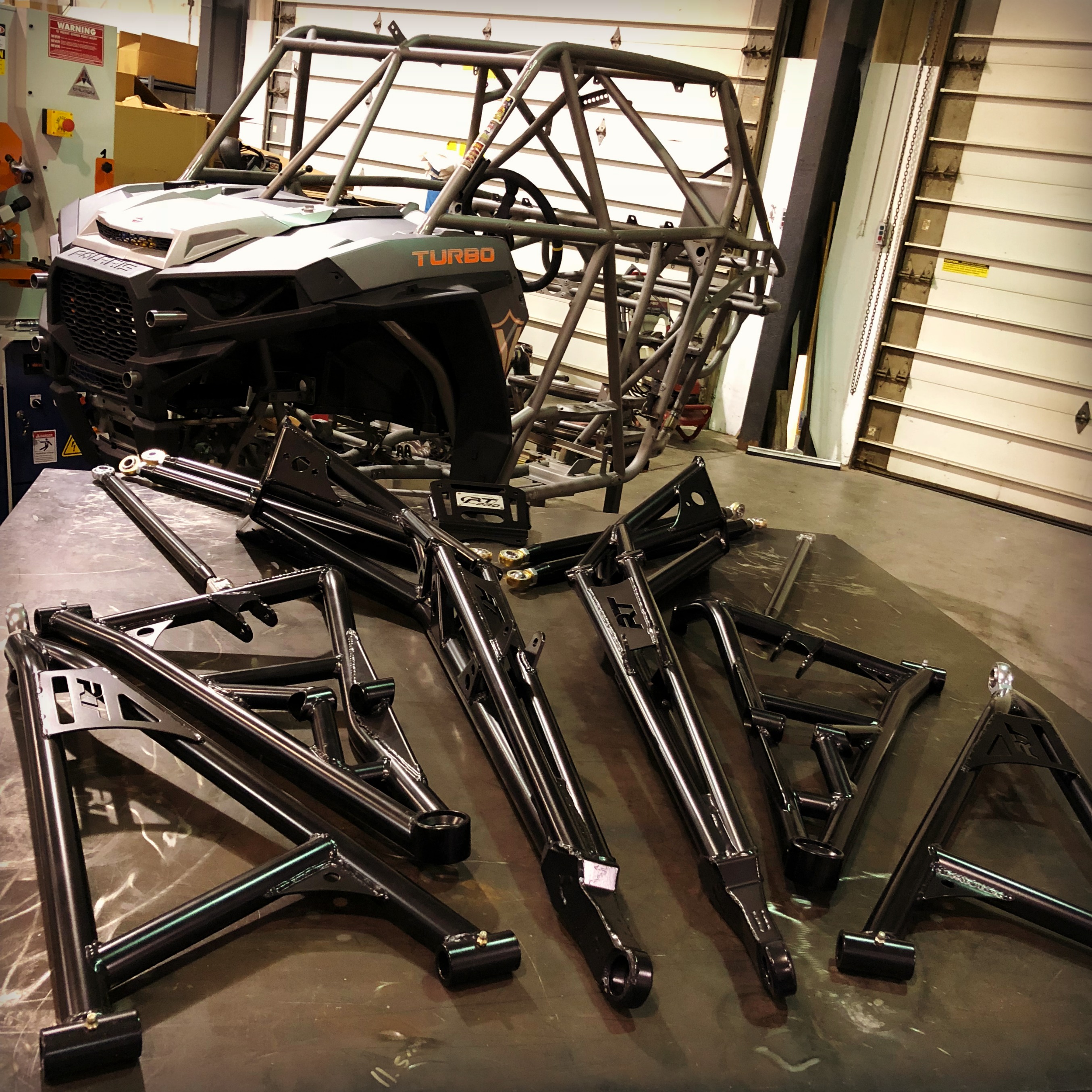 While at Parker, I saw the new Raceline Mamba Race wheel and knew I had to have them! We talked to Raceline and we are excited to welcome them on board to the Valor Racing team! What I liked about the new wheel was the 5+1 offset and the 6” wide wheel over some of the other 5” wide wheels. I just felt 5” was a bit too narrow and the offset on these was perfect! In addition to the wheels, we were approached by GBC Motorsports with a tire offer. After looking into their new Kanati Terra Master, I decided that I wanted to give these tires a go! The dual tread pattern intrigues me, and I wanted to see what these were all about. I have used the 10-ply Kanati Mongrels in the past with good results so I had some confidence to bring these on as well. 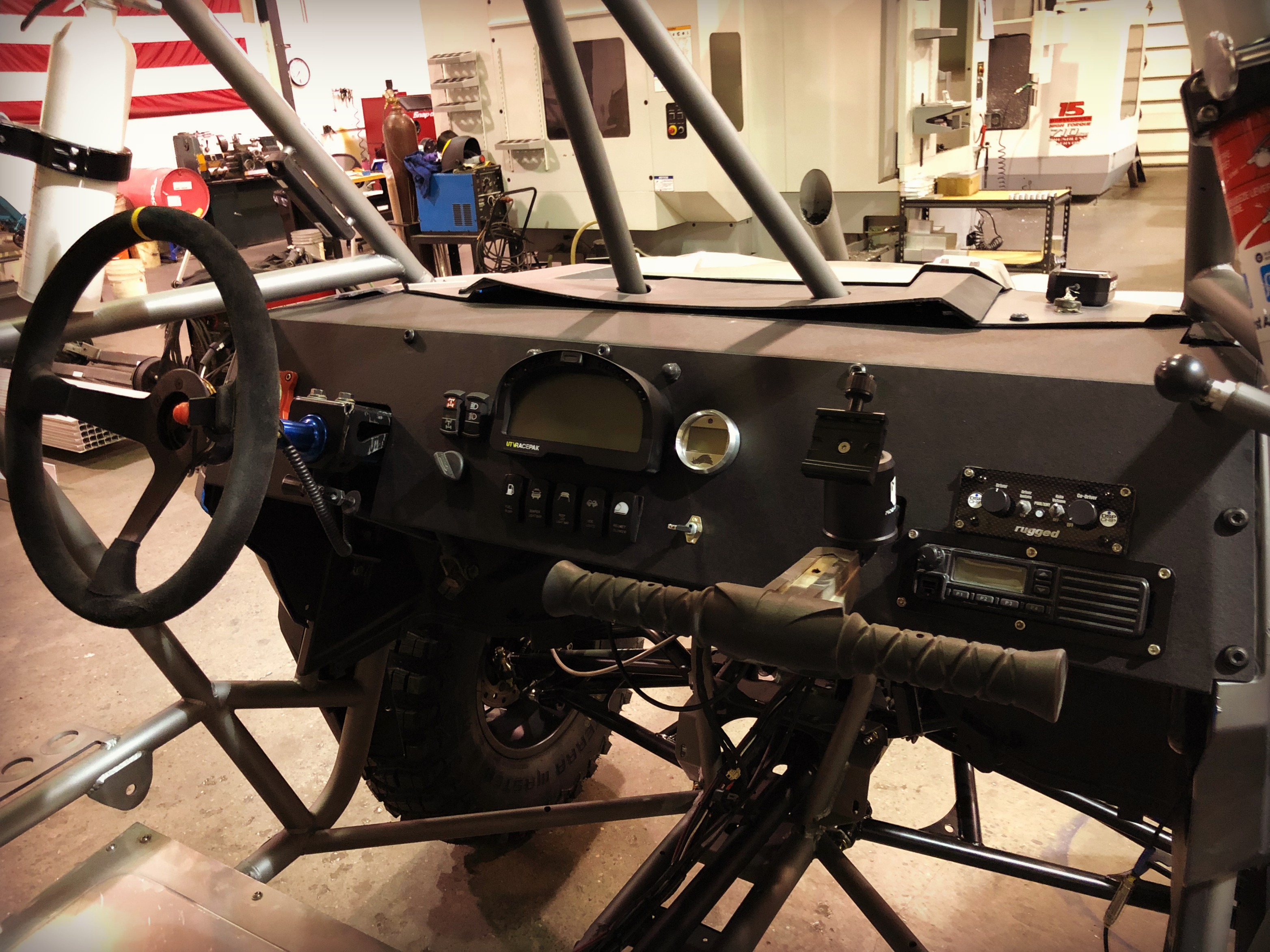 Needless to say, we were basically going to bring a whole new car to the MINT. With all the redesign, I wanted to update the look as well. I contacted Corbin at Union Graphics Co. in St. George, UT and asked if he thought he could put a wrap together for me. I outlined some ideas I had, and Corbin made it all work in no time! I drove the car down and in less than 24 hours, I was headed back with a basically new car! 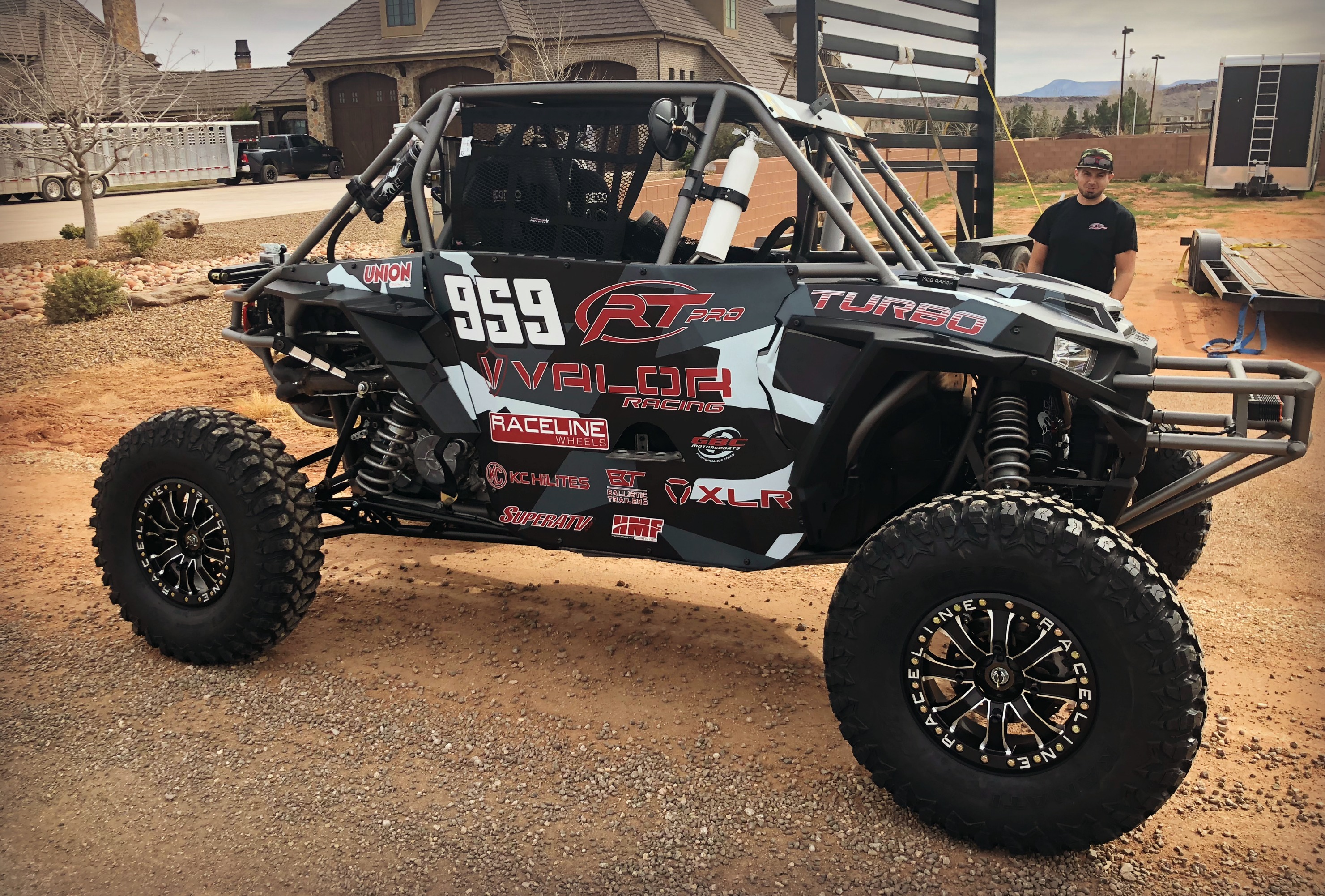 Testing would be paramount to get the feel of this new setup and although I intended it, time simply ran out. We were working on the car up to the day before the race lol. How is it that always happens with racing?!?

We made it to Vegas and my first drive in the car was down the strip in the Parade! People were lined up everywhere and it was such a fun and exciting experience! 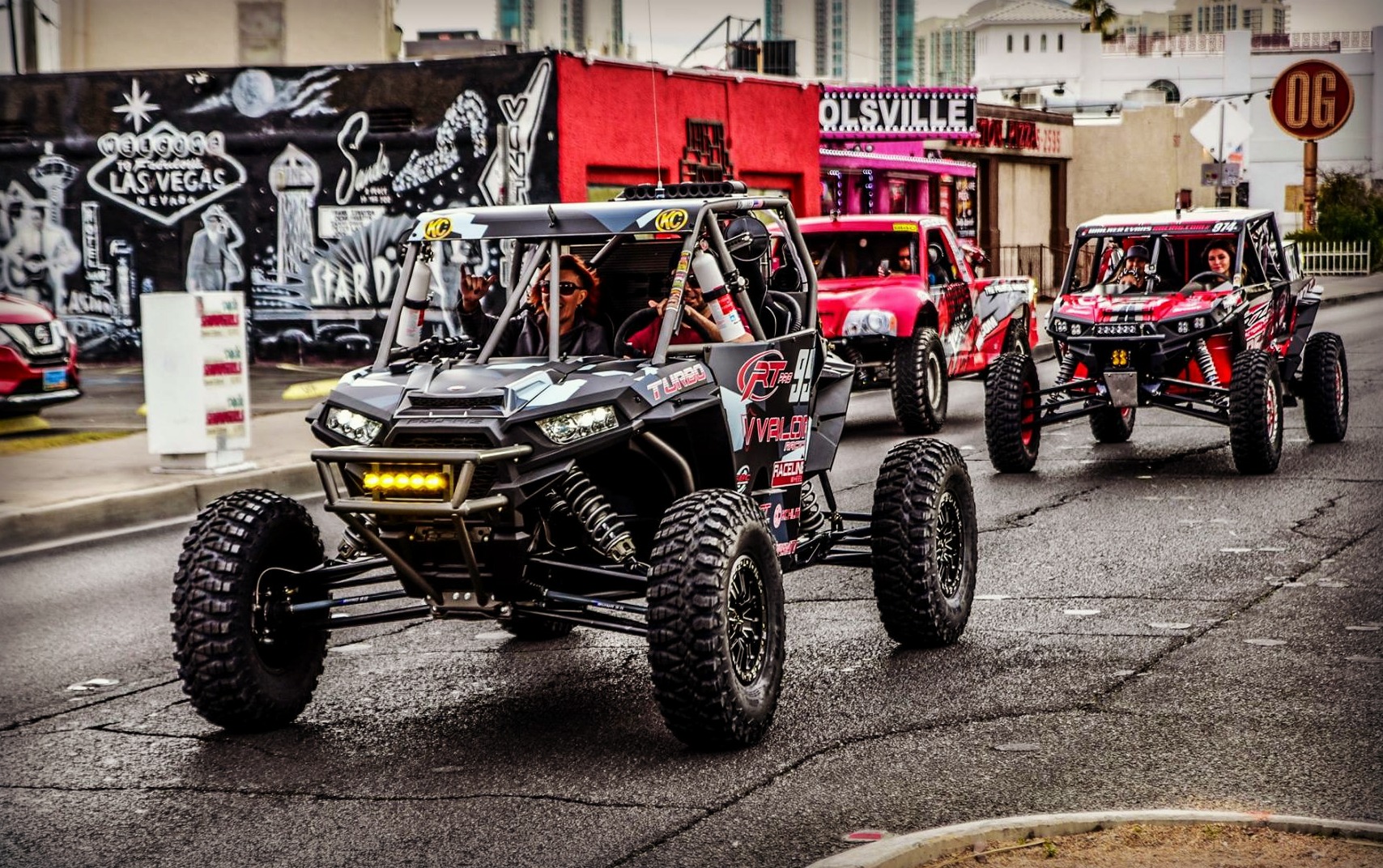 Okay so race day. Staging was Saturday morning at 5:00 a.m. and we were prompt and on time being the first there. With the 16th starting position so we were in a good place to be. We would take off next to the Star Car with renowned NHRA racers Antron Brown and Steve Torrance at the wheel. I had to get the hole shot just because of their legacy lol! Lights turned green and we were off! The car squatted down and launched off the line. Holeshot! We beat the star car to the first corner and made the turn. About halfway down the second straight was a jump. Although it did not initially look that big, we launched off the jump and caught some big air! We flat landed and bottomed out hard. Immediately, we lost our communications between each other. Josh started giving me hand signals which actually worked well. The course was incredibly rough. After the first few miles we had to slow as we were bottoming out hard on every bump. Just a few miles later, I lost power steering. We hunkered down and kept fighting. Not long after, belt temperatures started to soar. I had just installed the Razorback belt gauge, so I thought that maybe it was reading the clutch sheave versus the belt. It was not. About 2 miles from the first pit, we lost the belt. Josh and I jumped out and quickly fixed the belt opting to not re-install the clutch cover to help with the temps. While we were stopped, I ducked under the dash and found the radio wire that had somehow come unplugged. Sweet! Coms are back on! 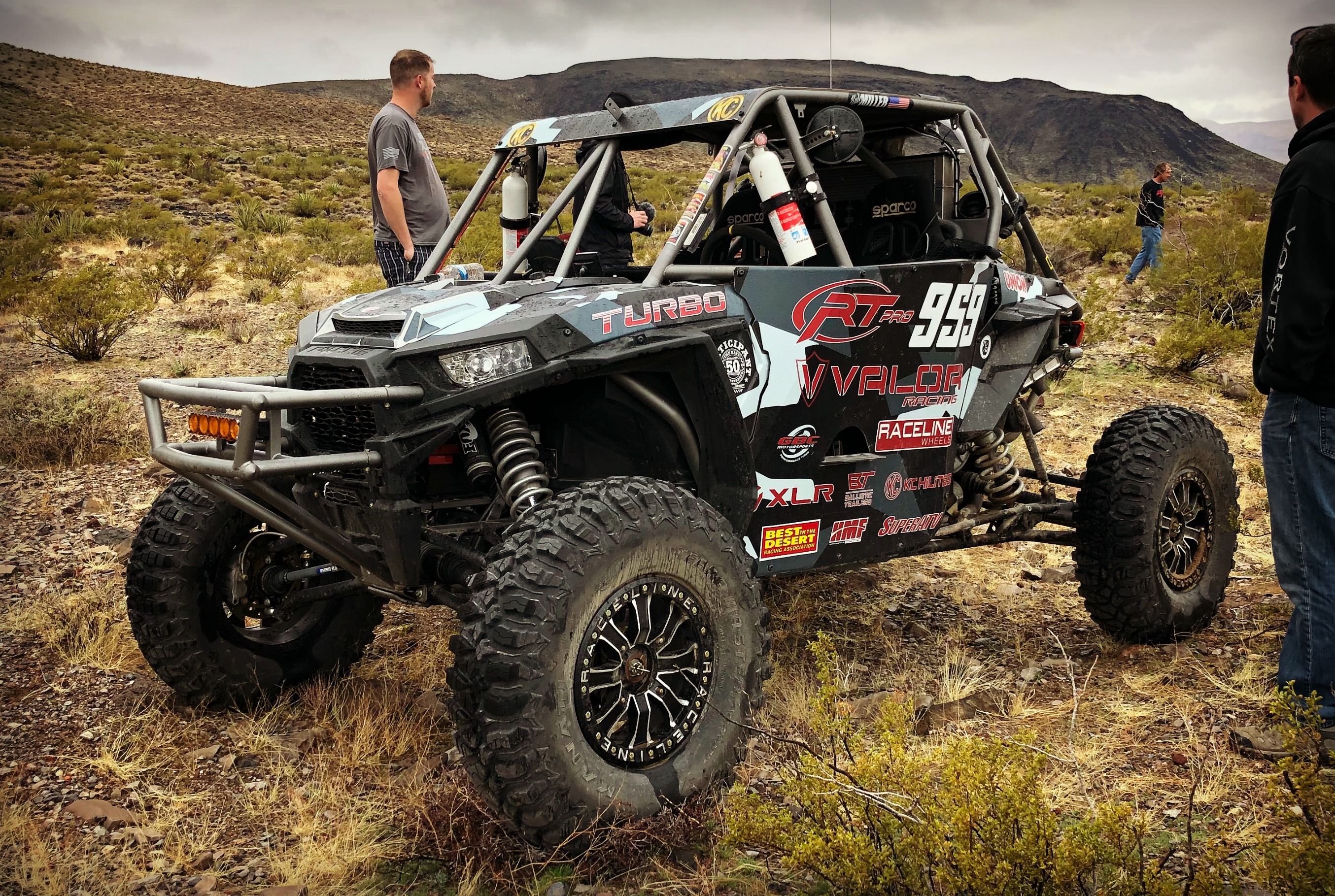 We quickly made it to pit 2 where we instructed our pit to tighten our suspension. They did, and we were off again. I had also regained my power steering, so the car was feeling much better! The suspension adjustment had worked, and we were no longer bottoming out on every bump. However, after just a few miles we got the engine temperature warning. I pulled over and discovered there was basically no coolant in the car. Hmm. We emptied our camelbacks and filled the car back up. We were off again but it was not for long. Engine temperatures shot back up and we pulled over. It was then we had discovered that a radiator fan blade had broke and taken out several rows of our radiator. Our race was done at mile marker 47.

It was a very disappointing way to finish the MINT. I am so thankful to have participated but at the same time desperately wanted some redemption from Parker. But that is racing, and we will come back stronger.

I want to give a huge shout out to my crew who all volunteered their time and money to come help me out! We had 18 people with 3 chase trucks there to help and support us! I feel so absolutely blessed to have each of these people in my life! 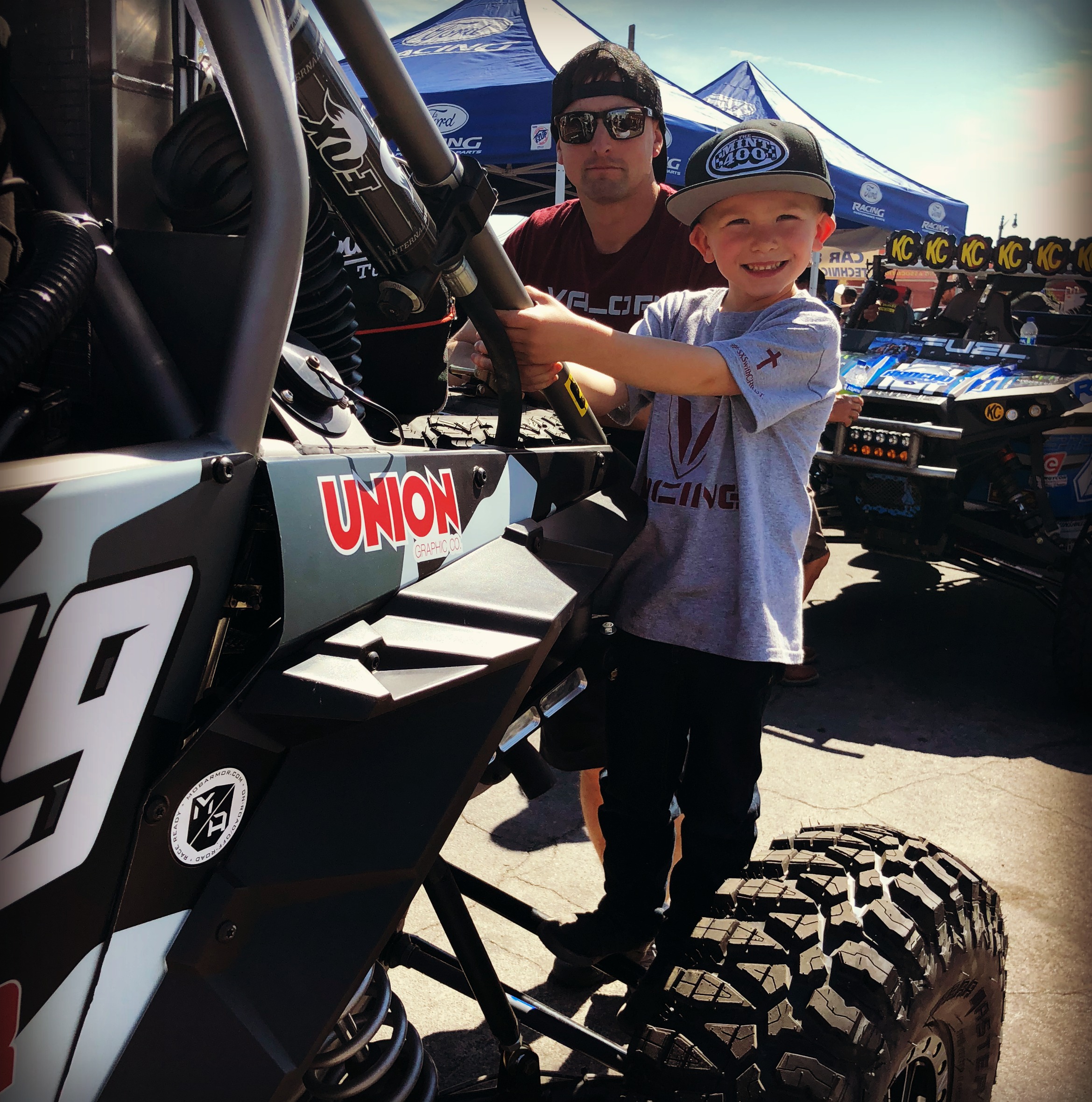 And of course, I want to thank my sponsors. Guys, seriously please support these companies. These guys are stepping up to help grow our sport and they are always present to lend support! I feel so privileged to have these products on my car.