This is a simple request I copied from facebook


This was posted in a Childhood leukemia ( ALL Jordi’s diagnose ) support group I am in . PLEASE SHARE to help this young warriors wish come true.

SON AGE 11 HAS DECIDED TO GIVE UP FIGHTING LUKEIMIEA.HIS WISH IS TO HAVE HIS CASKET COVERED IN RACING STICKERS. IF YOU CAN HELP

Post from Dana Huff
This young man is in our oncology group he has gone thru treatment then BMT and relapsed again. It is not responding to chemo. He made the brave decision to stop treatment .It is heartbreaking

Let’s take a moment to make Jordi's last dream come true, send him some stickers and swag, I can’t imagine what he and his family are going thru

Heres a update on the Address to send you gift to, It’s his moms home ,I was told the other address is someone close to him but this is a more direct contact

Thank you for the address!
"To air is human"

Dug thru my steeker collection.
Sending these out tomorrow.

I just stuffed an envelope full of these. Hopefully everything we send him puts a smile on his face... It was recently posted on Fishgistics FB page that the family is now asking for no more stickers. Sounds like the racing community has sent way more than they can use.

That's awesome.
Hopefully it encourages the little guy to press on and not give up just yet.
I cant imagine what he has gone thru. But it makes me sad to hear he is wanting to give up.
There is so much in life to see and be thankful for. I just pray he has a chance to experience some of it.
A Hearse doesn't come with a luggage rack!

JDDurfey said:
It was recently posted on Fishgistics FB page that the family is now asking for no more stickers. Sounds like the racing community has sent way more than they can use.
Click to expand...

I didn't see that... Well at least I also sent him some videos and DP15 before anyone else sees it. I figured they would get plenty of stickers from everyone in the off road community.
dezertpeople.com
offroadaction.ca Sent today with a prayer for this young hero of mine. Parneli told me (it’s not a wreck until you give up on it). Never give up.

This story has been circulating through dirt track racing groups here in the Midwest. I am assuming it's the same one/boy. A lot of people responded quickly, proving racing is a family, anywhere you are. An 11-year-old boy dying from leukemia wants racing stickers for his casket
D

Racers are any age ,God Bless you Caleb

Just found out Caleb has passed on. Godspeed. Copied from St. Louis Dirt Track Racing Facebook page.-"It is with great sadness that we’ve learned that Caleb Hammond has passed and gone to Heaven. He is a warrior. He is my hero. He is my inspiration. Thank you Caleb for showing all of us how to be brave. Our hearts are filled with sadness for his family. Rest In Peace Caleb. God Speed. " Still sad news on an expected outcome.
I hope he was able to enjoy his last days by being a kid.
Rest in peace my young racer friend. Hope you are now doing laps up there with all of the great ones.
A Hearse doesn't come with a luggage rack! 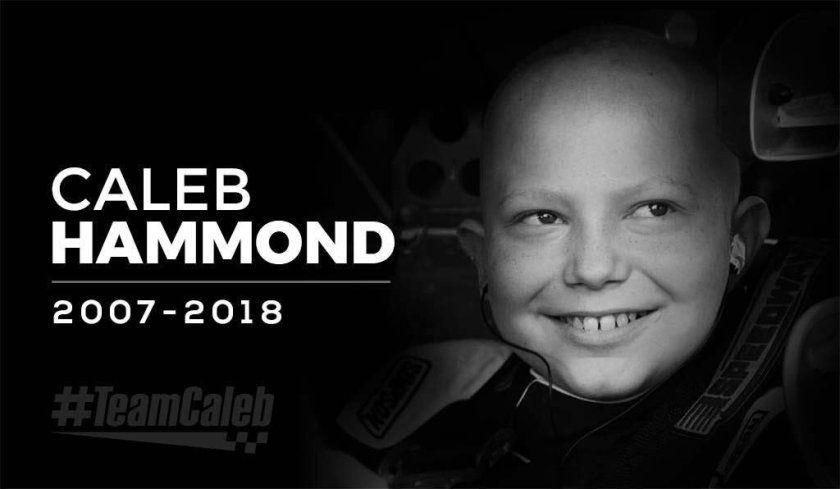 Caleb Hammond, the brave 11-year-old race fan who requested racing stickers be applied to his coffin when he passed away, will be laid to rest Saturday in his hometown of Oskaloosa, Iowa.
Visitation will be held Friday at Gateway Church of the Nazarene in Oskaloosa, starting at 11 a.m. CT. His funeral will be Saturday, at the same church, at 10:30 a.m. CT.
In one of Caleb’s last requests, he asked that those attending both his wake and funeral wear either Green Bay Packers clothing or racing regalia, per a report by WHO-TV in Des Moines, Iowa.

Caleb passed away early Monday morning after a two-plus year battle with leukemia. His family had stopped treatments last month when doctors said the leukemia was too far advanced to continue treatment.
“To know Caleb was to know how strong, brave, loving, caring and courageous he was,” his obituary read. “To his parents he was their strength, the sunshine to their days, their hero but first and foremost, he was their Little Boy.
“Caleb was selfless and hated seeing his parents sad when he was sick, he was stubborn and held on until they all fell asleep.”
Caleb had asked several local area Iowa race teams to send him stickers to apply to his coffin when he passed away. The story went viral globally and brought together the world of motorsport in a way that hasn’t been seen in a long time.
Teams and drivers from IndyCar, NASCAR, NHRA, World of Outlaws and other racing teams and sanctioning bodies inundated Caleb’s home with countless stickers as well as a variety of souvenirs, autographs, photos and more.
Caleb was remembered prior to Monday’s Brickyard 400 at Indianapolis Motor Speedway with a moment of silence.
Given the response from IndyCar and NHRA teams to Caleb’s request for stickers for his coffin, it’s likely he’ll also be remembered this weekend at the IndyCar race in Sonoma, California, and the NHRA race in Reading, Pennsylvania.
Even in his final weeks, Caleb never stopped smiling or displaying a spirit that brought both smiles and tears to countless individuals that didn’t even know him, particularly race car drivers like Kyle Larson.

Among the special moments Caleb got to enjoy before his passing was being honored with a ride around his local short track, Southern Iowa Speedway in Oskaloosa, on August 18, where he won a ceremonial race in his honor.
He also was treated to a 200-mph ride in a $3 million Ferrari around Iowa Speedway near his home in the weeks before his condition worsened.

Here are some additional and noteworthy posts from social media remembering and honoring Caleb:


Sent from my iPhone

God has blesses this young man, regardless age or track time he is a Racer just like any of us .Godspeed Caleb,You will great us at the finish line.