OK, we all know that 2-strokes rule in the fun department, and they make great woods bikes, and they are even excellent for desert trails, right?

But what about their status as desert racers? Does anyone still compete on them in long distance desert races (like BITD or SCORE) anymore? Do they ever win??

The big Kawi and Honda 500 2-strokes ruled as recently as the 1990s. Team Green had that long 7 year Baja 1000 winning streak going, then quit, and it's been all four-strokes since then.

At least that's the view from the big-bucks factory side. Obviously Honda wanted to dominate Baja, and they have. But it's not just the Honda factory team. The other top teams seem to move to 450cc four strokes, or the big-bore KTMs, or other big 4-strokes.

My guess is that the only class that a 2-stroke might be competitive in these days in the "250" class - where it would have a horsepower advantage over a similar displacement 4-stroke. (The BITD rules say "any engine type").

As soon as you get to an "Open" class you have 450cc, 525cc and 600+cc 4-strokes VS. the largest current production 2-strokes, the 300cc KTM and Husky. It would seem the 2-strokes are at a serious horsepower disadvantage.

I'd love to see KTM, the king of weird displacements, build big-bore 2-stroke fans a nice modern KTM-550. Why don't they? I'm thinking that if it would win races, they would probably build it.

So, my overall impression is that 4-stroke technology has proven to be superior for long distance dez racing. I'm still thinking about finding an old 500 smoker just to be different.

The KTM300 is pretty much the the last of the 2 strokes being raced on a regular basis in any of the long distance stuff. The last KX500 I saw in a SCORE race was the 2009 1000. Can't remember how they did but I think they finished. A lot of the pit service companies will not pit a smoker. The sound of a big bore 2 stroke pinned across the desert can't be beat. When I have some extra money (never) I am buying another KX500, my 94 was one of the funnest bikes ever. If you are seriuos about buying a 500, look in KSLclassifieds.com here in Utah, there are a lot of them since hill climb racing is still popular here.

Unfortunately they are dead...but there's no reason they should be. The beginning of the end of 2 strokes was CARB. They put so much pressure on the OEMs they decided to go completely 4 stroke, no matter what the cost might be. The biggest push coming from Honda, who was determined to see the end of 2 stroke motorcycles. Right now there's 2 stroke engineers being laughed at and mocked because Honda has a 4 stroke agenda. They leaned on the AMA and the rest of the OEMs to get 2 strokes banned. Even though there is an air injection 2 stroke out there that meets or beats any of any the emissions regulations that exist.

I think the biggest reason they wanted the 2 stroke dead was for money. Rebuilding your 2 stroke costed what? $250? Rebuilding a 4 stroke costs $3000. AND it's not like they run forever either, on a '10 YZ450F after ten hours of operation, you have to take the barrel off and install new small end teflon wrist pin keepers. This is on a $9000 bike.
The 250F's run at 13,500 RPM and that’s right near the limit of metallurgy. Any higher on a four stroke single and you start to melt metal.

4 strokes sound awful too. I'm no KTM fan but I'm so glad they have no intention of killing the 2 stroke. There are a ton of us that would love to see them come back.


So yeah...they're dead, mostly thanks to Honda...but they're capable of mopping the floor with 4 strokes.

^^^^^^^^^^^Sad but true^^^^.
I would have put more of the MX 4 stroke push on Yamaha since they seemed to be the pioneers of modern day 4stk with the yzf400 that Henery raced? It was so odd hearing that thumper amongst all those 2 strokes back then.

this thread has me thinking of running my cr500 aluminum frame conversion in the vegas to reno this year instead of my xr650r...
www.barnstormerracing.com couldn't do it without: MX1WEST.com, purebuildhomes.com, ProService Landscape - BITD 379 - D36 196F

Is that a Chase Concepts CR conversion?

AngryShawn said:
this thread has me thinking of running my cr500 aluminum frame conversion in the vegas to reno this year instead of my xr650r...
Click to expand...

You have a CR500AF, those are awesome...is it Service Honda? Please run it and report back here!

Brad Lackey took a 1981 Maico 490 for a long ride and came back impressed. He said that the bike was faster, turned better, handled better and had better suspension than his 2010 RMZ450. The only thing the four stroke had better was superior brakes. The 490 had more HP and was about 20 pounds lighter than the 4 stroke.

Heard anything about Orbital? 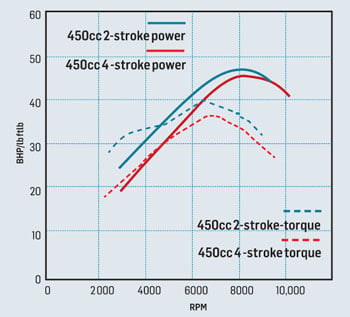 Future 2 strokes will have capacities on par with 4 strokes, allowing a milder state of tune than that which earned them their peaky reputation. The result trounces the four-stroke for power, torque, flexibility and even service intervals says Orbital – whose experimental (and under-developed) 450cc single-cylinder two-stroke produced these curves against a rival 450cc 4 stroke. The 2 stroke also proved smaller and lighter, cheaper to build, less thirsty and with identical emissions.

That's cool that you built yours. How much under $10,000 (Service Honda CR500AF price) did you stay? I have never heard anything about bad quality from them. I know that Trigger Gumm jumped a SH CR500AF 277 feet and Robbie Maddison jumped one 322 feet...I thought that was OK.

Anyways, are you going to race this thing in NV or the pig farm tractor?

MXShea said:
That's cool that you built yours. How much under $10,000 (Service Honda CR500AF price) did you stay? I have never heard anything about bad quality from them. I know that Trigger Gumm jumped a SH CR500AF 277 feet and Robbie Maddison jumped one 322 feet...I thought that was OK.

Anyways, are you going to race this thing in NV or the pig farm tractor?
Click to expand...

Way under 10K. If memory serves me correctly, all told I'm in to the bike about $4500 after selling off all the stuff I didn't need from the donor bike and roller. I could have probably done it less expensively but there were certain aspects of the build I wanted to be sure were done right, most notably going with a custom Y.
I've seen plenty of pics on the 500 forums of SH builds and while some look good, others were just atrocious. In fact, I bought a SH Junior X for my wife second hand and was appalled at the welds, sure they function, but it looks like a beginner did the work. On top of that, the attention to detail on this particular bike was non-existant, the battery was literally sitting on top of the air filter and had worn a hole in the filter, it was easily fixed with a big hose clamp to raise and secure the battery, and you should have seen the electrical system rats nest.. Definitely not what I would expect for premium price SH puts on these bikes.
In terms of the 500 v XR for the race, both bikes have advantages/disadvantages so we're going to do some side by side seat of the pants testing and see which one we like best.
www.barnstormerracing.com couldn't do it without: MX1WEST.com, purebuildhomes.com, ProService Landscape - BITD 379 - D36 196F