WASHINGTON — Rep. Cresent Hardy on Thursday put in a request to Interior Secretary Sally Jewell that Nevadans be given more time to weigh in on a new resource management plan for 3.1 million acres of federal land in Southern Nevada.

The Bureau of Land Management originally set a three-month comment period , then added an extra month. The new deadline for public comment is Monday for the 2,200-page proposal that has proved to be controversial and that prompted fine-toothed-comb reviews by locals who are BLM skeptics.

“The public in my area does not feel they’ve had adequate time,” said Hardy, a Republican from Mesquite who represents the 4th Congressional District that includes rural northern Clark County and counties across central Nevada.

Hardy said his constituents work for a living and “do not have the opportunity to be full-time on these projects yet it affects their everyday lives tremendously.”

The resource plan is the first major overhaul since 1998 of how the BLM manages public land from its Las Vegas and Pahrump field offices. It would open more land to development while seeking to preserve habitat on 278,000 acres by expanding designated Areas of Critical Environmental Concern or creating new ones.

In January, the Nye County Commission passed a resolution calling the plan “repugnant,” saying it would cause “further economic and environmental damage” to the county.

Jewell was noncommittal on Hardy’s request, saying BLM often extends public comment periods and “doesn’t do these things in a vacuum

Gosar listens to complaints about BLM 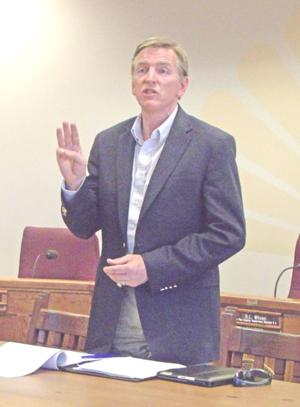 Gosar listens to complaints about BLM

U.S. Rep. Paul Gosar, R-Ariz., told an audience April 16 at the La Paz County Supervisors’ Boardroom that he was there to listen, and he got an earful from local residents about the U.S. Bureau of Land Management. The topic at hand was the La Posa Travel Management Plan from BLM’s Yuma office. Local residents feared the plan could close trails on land held by the BLM in and around Quartzsite.

Several persons stated the BLM had not been open about their plans. They noted the comment periods were held in summer, when winter visitors who use the trails aren’t in the area.

The meeting was arranged by La Paz County District 3 Supervisor Holly Irwin. The issue of the travel plan was brought up at a previous town hall meeting with Gosar in January. Irwin said she and Gosar agreed the issue needed to be discussed in a more in-depth manner, so the April 16 meeting was set up.

The first speaker, Quartzsite resident Steve Hunt, said the BLM had been harassing and misleading people. He said he was told that miners with valid claims would be allowed to access those claims, but friends and families of miners would be ticketed if they crossed closed trails or roads. He was also told he couldn’t camp on his claim, but the law said he could camp up to 14 days before having to bring in mining equipment.

Charlie Weinheimer of the Quartzsite Metal Detecting Club said he could’ve had 250 to 400 persons making comments to the BLM, but he was told he should do it as the representative of the group. He also said the BLM has its comment period at times of the year when the winter visitors are gone.

Mike Reeves of the Parker 4-Wheelers said their organization has had similar problems in their dealings with the BLM’s Lake Havasu office. He said they were required to pay a larger fee for their poker runs because they were considered “competitions.”

“They don’t communicate,” he said.

Richard McGill of the Sunriders ATV Club said the State of Arizona should be supporting the local residents, as should local businesses as they will be the biggest losers if trails close.

McGill said his group had offered to map the trails in 2009, and the BLM said that was a good idea. In 2010, they offered to make maps, but were told it was premature. He said that, under the current plan, up to 51 percent of the trails could be closed.

Gosar told McGill and the audience that no state officials had been invited to the meeting. He said he was there to listen.

Denise McMahon of the Desert Storm Rally said permits for their events had been denied by the BLM’s Lake Havasu office on the grounds they did not have enough personnel. She said the trails are, in fact, county roads built when the area was part of Yuma County.

“If we all come together, we can overturn BLM’s rules,” she said. “These are our lands!”

Mike Roth, a Quartzsite miner and rock hound, urged everyone to look up the website of the American Lands Council. He also urged people in the audience to document their encounters with BLM officials on video.

Roth also urged local law enforcement not to cooperate with the BLM.

Parker residents Steve Draper and John Sunderlin said they had document that they’d put on a DVD showing that the trails were actually county roads built by Yuma County in the late 19th century.

Draper said a major problem is the BLM’s local management changes every year and they’re not interested in local issues.

Irwin said she had seen the proposed plan, but the BLM had not informed the Board of Supervisors as to what their intentions were. She said what she’d heard had come through third parties. She added that this issue affects the entire county.

Gosar urged everyone to document their dealings with the BLM, and to send that documentation to his office. He said he needed to have something he could present in Congress about this whole matter. He described himself as a strategist, and documentation was part of the strategy for making a case in Washington.

For those who were veterans of the U.S. Armed Forces, Gosar suggested looking into a program called Equal Access to Justice. This program was set up to help veterans deal with problems with government agencies. He also suggested those who couldn’t walk or ride animals and who needed motorized transport to use the trails could look into filing complaints under the Americans with Disabilities Act.

Gosar also urged the audience to vote for those candidates who will represent their interests.

BLM refused Cresent Hardy's request for a 6 month extension - a sitting Congressman - and they refuse.
Today is the last day to comment

Comment at this link , take a minute and send it www.sharetrails.org/letters/letter.php?id=77
X

DID IT, very easy
G

done
The problem with the gene pool is that there is no lifeguard.

Thanks guys you can send in more than one
X

snoreracer said:
Thanks guys you can send in more than one
Click to expand...

I have done it 4 times today. I did notice that there are 7 different topics on the left side you can ad to your comment letter , that makes it nice .

Yesterday was the last day to coment but this is not over , I need each and everyone of you to contact the governor of the state of Nevada at this link http://gov.nv.gov/Contact/Email-the-Governor/ send him an email and tell him how much you like to come to Nevada and recreate in the desert. Let him know that he needs to let the BLM know that he will not sign off on an RMP that has not had a travel management plan done 1st .
S

Thank you for taking the time to contact me. It is an honor to serve the people of Nevada as Governor, hearing from constituents is a top priority for my office.
Click to expand...

I know a lot of you are in the mint mode right now but the map I am posting shows how much of this years mint 400 would be lost if revision 4 of the RMP gets in . Miles 49-53 gone and miles 63 - 66 gone and miles 72- 75 gone and it takes out all of hidden Valley . Please let the Governor of Nevada know how this will affect you visiting Nevada That would take 25 miles out of the mint track !!

And if you ever wanted to race the old mint track like in 2009 to 2011 it will be gone forever if the RMP gets this new ACEC that is protecting the Spanish trail that was raced on for over 20 years and the milkuetch weed. Join the BRC they have hired a lawyer and are going to file a law suit but we need to help them. GIVE MARK A CALL HE IS A PAST OFF-ROAD RACER
NEVADA LIEUTENANT GOVERNOR - MARK HUTCHISON
phone: (702) 486-2400
tell him that we need the travel management plan 1st frostbite36 said:
If we don't get lawyers, we're screwed....bottom line, that's the only thing BLM will respond to.
Click to expand...