So I have decided to swap a Dana 50 into my 90 full size bronco. I searched around and couldn’t find anyone who had done/documented this swap. I already know most people don’t think the Dana 50 ttb swap is pointless but I’m going to go ahead and do it anyway. The end goal for this build will be a hybrid desert/rock Crawler(KOH inspired). I started with a Dana 50 from a diesel 95 f250 tore It all the way down to just the arms. I wanted to do a “cut and turn” but I have never liked cutting the ball joint seat out. I went for the approach of cutting the whole lower ball joint C off and pushing it out. My thought was more surface area to weld and better reinforcement. I opted for pushing the ball joint out 1inch on both sides.

I took the arm brackets off the f250 and mocked them up on the bronco crossmember. I measured, checked, measured again and finally checked again! I got the brackets bolted in place and checked camber with a angle finder setting both arms at 0 degrees with apx 4.5” of loft. I Checked that the axle was centered Also as you can tell I cleaned up the arms and knuckles installing non greasable upper and lower ball joints. As of right now I’m waiting for Heim joints and brackets so I can start building the radius arms. I will post more as I slowly plug away at the project and yes I’m doing this in the gravel haha the shop is full up with other projects at the moment. Got to do what you got to do.

You can get tons of travel (18+”) for super cheap with a cut and turn on the beams , but you go super negative or super positive on your cam when you hit bumps which causes uneven tire wear . But they’re awesome Offroad . I️ve built a prerunner bronco and a 97 f250 HD with the d50 TTB.

Iceland is famous for COOL 4x4s. They did a Ford 4x4 conversion, using TTB. I would try to do this today, instead of a front axle

[ "waving/sweeping his arms", talking to someone outside the pit (they were discussion offroad suspensions). STILL have that etched in my brain. TTB is an effective front-end solution, bang/buck in terms of wheel-travel.

Jim was crew-chief for famed Toyota PPI (Cal Wells Jr owner), before his back injury. Something about some female hot-shoe getting in a MTEG stadium truck (Jim was also in it) & WRECKING IT!! PPI used to be in Torrance/CA, Jim told me about their "testing" late at night (& AM), & get pulled over by Torrance cops..haha!

I was at the '88 Fireworks 250 (?), John Kaiser (Alpha Marine in Temple City/CA, next to El Monte) had a Class 8 team driven by Don McCracken (sp? former Class 4 racer..you need to got WAY BACK to find this name!!), sponsored by Casablanca fans in Pasadena (where I live)

His son Johnny Kaiser & Kevin Smith (both went to El Monte HS) were friends with Robby Gordon way back when (late 80's, early 90's) when they were youngsters (late teens & early 20's).

[ I have yet to upload the video, Johnny & Roger Mears are talking. Mark Post was nearby ]

I saw Carl Renezeder pre-run a Baja race (Baja 500?) in a ordinary looking white Ford mini-pickup, with kinda goofy looking TTB (2WD). Not a fancy pre-runner, given that he's "bucks up"

He was staying at the Riviera hotel. I was at Ojos Negros, & he came by. There, I remember Josh Baldwin parked in the TT race-truck (?).. in full race-suit. His co-driver was ribbing him about that

I got a ride in the Baldwin A-arm pre-runner (Geiser built) at '07 CORR Antelope Valley, pretty sweet! Vildosola Racing has a similar one (in red)

[ let the debate between front A-arm VS TTB begin. Similar to the A-arm VS solid-axle in Ultra4 KOTH ] 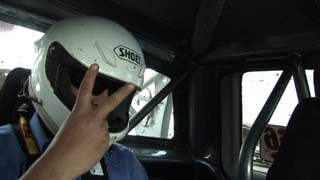 [ Blip.tv changed business-model, my videos don't work. I have to re-upload later to Vimeo ]

At another race, Josh Baldwin was giving demo-rides in the fancy Geiser-built pre-runner:


You can see it passing our car, driven by Brian xxxx. Latter bought SUspensions Unliimited, which was making buggy pre-runners. Good stuff. For some reason, it folded
J Made a little progress today, still haven’t received my Heim joints yet love the work area, 3/4 rock, its the best to drop small hardware bits into , they go' pooof' gone( i know.) looks good, why not go long radius arms?, tooo easy to do

Could just be the pics but looks as though you you have a lot of negative caster at ride height. This will make it a handful to drive especially if it droops at all.
J

I’m currently waiting on Heim joints and .25 wall Dom to fabricate new radius arms. When I build the new radius arms I will adjust the caster back into the positive range. I did make a little progress today mocking everything up with some old wheels and tires I had laying around. I had a pair of coil springs laying around so I cut them to length till I can get an engine cage built and coil overs ordered. Ignore the funky camber in the pics I didn’t have the correct lug nuts laying around for the Dana 50 studs so they are just sitting on the lugs So little update I got the 4.88 gears and lock right installed. Also received the materials to start building the radius arms and hardware to get the Dana 70 under the rear. As you can tell from the picture I reused the Dana 44 carrier, gears and lockers where much cheaper for the 44 than the Dana 50. Will be using the Dana 50 axle shafts and eliminating the inner c clips. Finally got the Dana 70 under the rear of the bronco