So back in May a few weeks before the 500 I was at Lunch with my buddy Sanjay talking about my upcoming trip to Mexico. He had mentioned before that he really wanted to try racing his KTM 525 sometime in the near future and I began talking about the BITD Vegas to Reno Race coming up in August. We talked about it for a minute or so, and he just blurted out, "ok I’m going to race it". I knew he wasn’t kidding, and a few days later he was signed up in amateur iron man, and the prep on the bike began. Now when we started telling people how Sanjay picked the 3 day, 1000 mile staged V2R as his first race, some thought he was stupid and others just shook their head.

Now a little background on Sanjay.. He’s a 26 years old guy who has never owned a car… only motorcycles. He literally lives his life on 2 wheels. He was a professional mountain biker for 4 years and has competed at every level all over the world. He’s no stranger to competition, and is ALWAYS looking for the next challenge in life. A few years back he flew to South America to compete in a downhill mountain bike race, and ended up extending his trip for two months. He bought a 97cc Honda Hero Passion and rode to the tip of Argentina and back, doing just over 10k miles in 2 months, all alone. He’s one of my good friends, and the nicest guy you will ever meet. (Personally I think he has a couple screws loose)

The Race
So Day 1 was a little hairy and had me worried. He started 4th in his class, and the first 2 pits went smooth. Around the third pit he came in looking a little woozy when he got off the bike. He had a real bad fall, went over the bars and taco’d his real wheel. His neck brace was broken, chest protector broken and the bike was just beat. He rested for a little bit while we changed the wheel, then he was off again. Rest of the day went smooth and he ended up 3rd, almost an hour behind the leader.

Day 2 was much better, but VERY dusty. He has issues in the morning and went down right off the start line. He came into pit 3 with broken pieces everywhere and a fork guard hanging off the side. A quick fix and some zip ties he was on his way. A few pits down the line he came in with a missing airbox cover from yet another crash. A quick fix with some cardboard and duct tape and he was good to go. He was the first to the finish line after day 2, but we had our work cut out for us in the work area. Oil change, new duct tape/card board air box cover, swap the rear tire, re-wire the taillight, zip-tied almost every piece of plastic back on and oh yeah the GPS mount completely broke off. When we thought we were done, he took the bike in to the compound and we noticed we forgot to put the skid plate back on

Day 3 Sanjay starts with his skid plate under his arm. Once he goes through the light and his time starts he pulls over to the side to install the skid plate right off the start line. For the most part things went smooth, until he blew his left fork seal before pit 2. Oil was leaking out of everywhere making his front brake basically useless. The remote pits did not help either seeing as we only had two chase trucks, yet we managed to get fuel to him, but it forced him to do two 80 mile + stretches without a pit. We figured he could go 100 miles on his tank (fingers were crossed) When he finally got to me at pit 7 he was looking great, but his bike looked like it just got dropped out of a war zone. Quick sandwich and Gatorade, air filter swap, re-fuel and a clean of the front brake and he was on his way. I hadn’t seen any other “o” yellow plates come through so I figured he was looking good.

He was the first across the line and finished 1st in his class out of I believe 24 entries and 42nd overall out of around 120 bikes and quads. We went there with the intention “I just want to finish” and getting first place was nowhere near what we expected. We met a lot of cool people, and had so much help at the pits from perfect strangers. I’ve spent the last few years on a team chasing a 7 and 8 truck, and I was blown away by how nice the motorcycle crowd was in comparison. Thanks to BITD for putting on a great event, V2R is still my favorite race to be a part of.

Thanks to Todd and Charles at Team Swolen for making our shirts and all our stickers. www.swolen.com 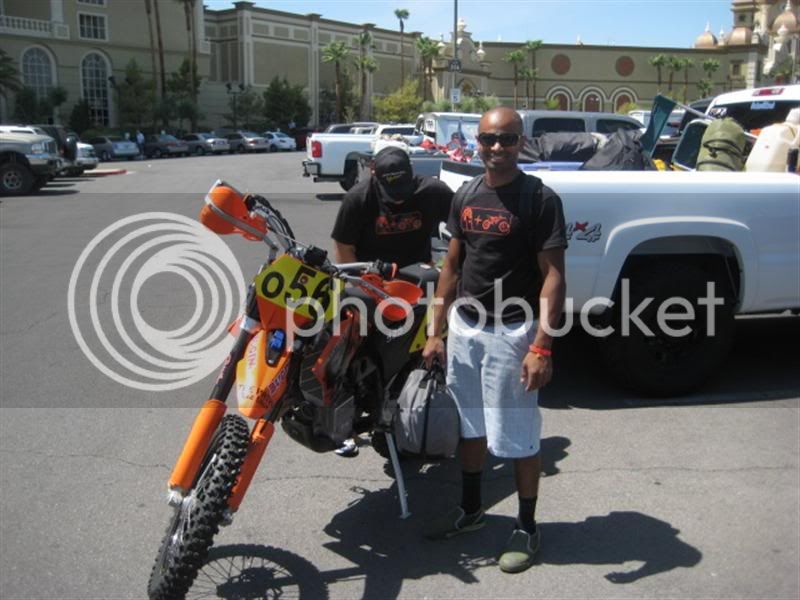 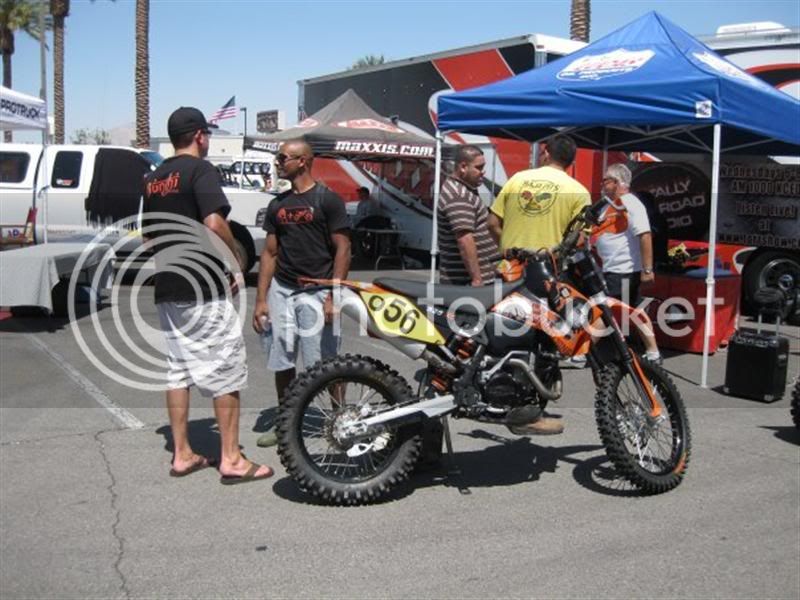 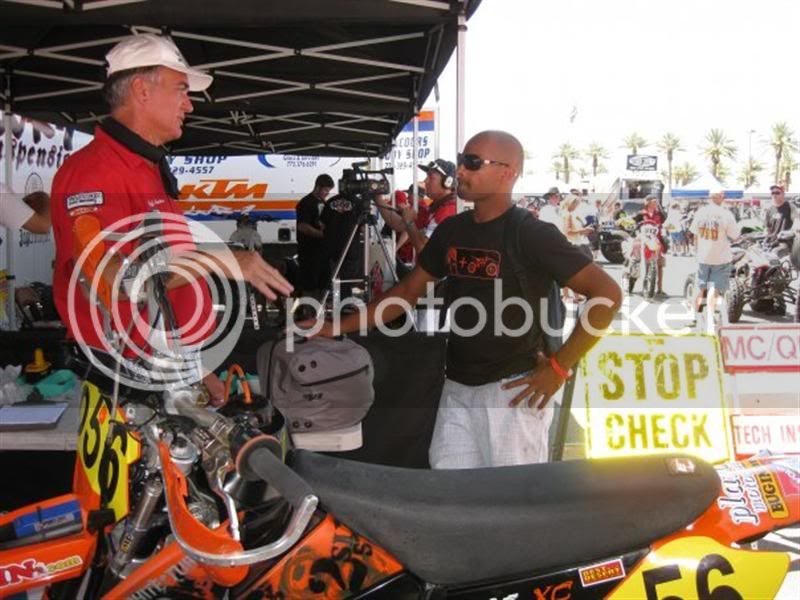 we actually had a real sponsor "EX Drinks" energy drinks... Hooked us up with some stuff 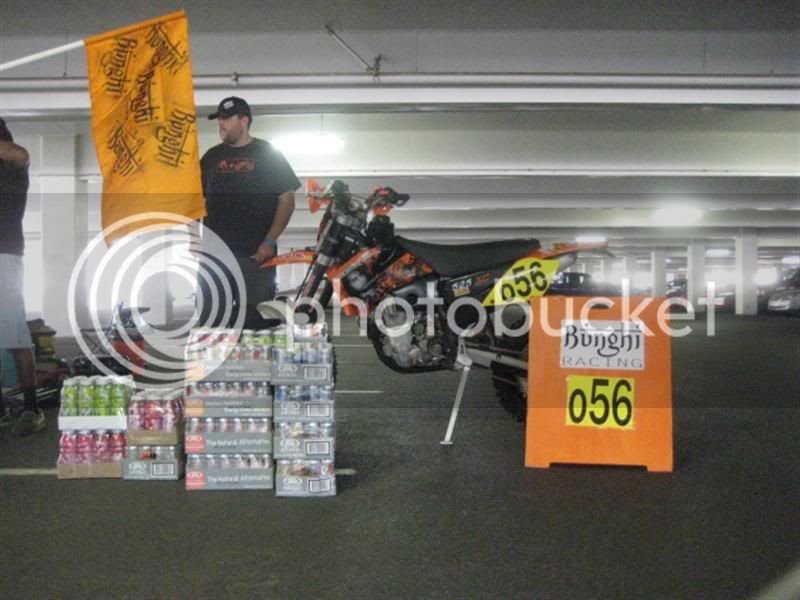 I'm a big guy and could make any motorcycle look small 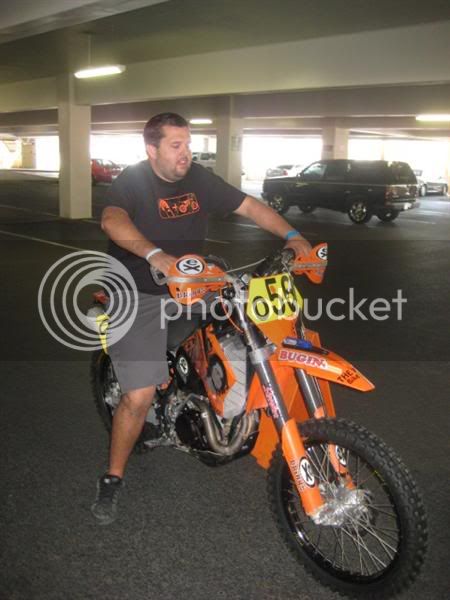 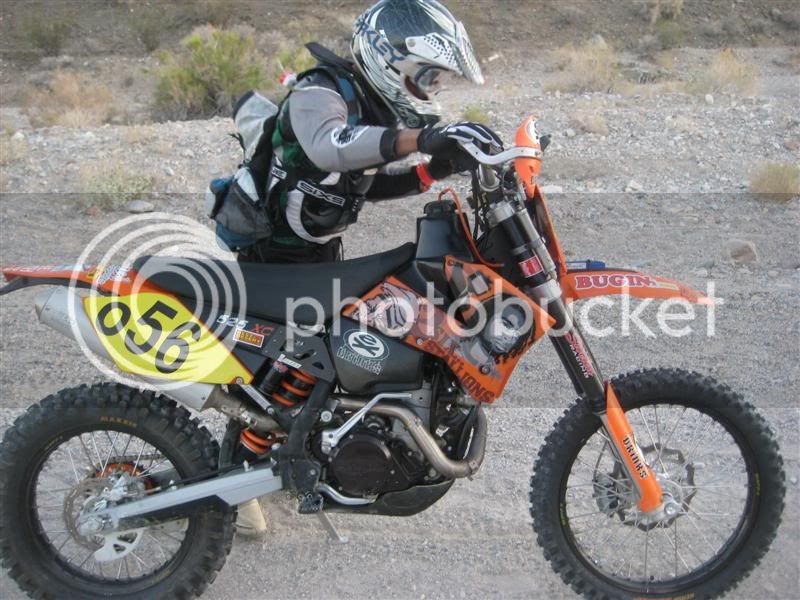 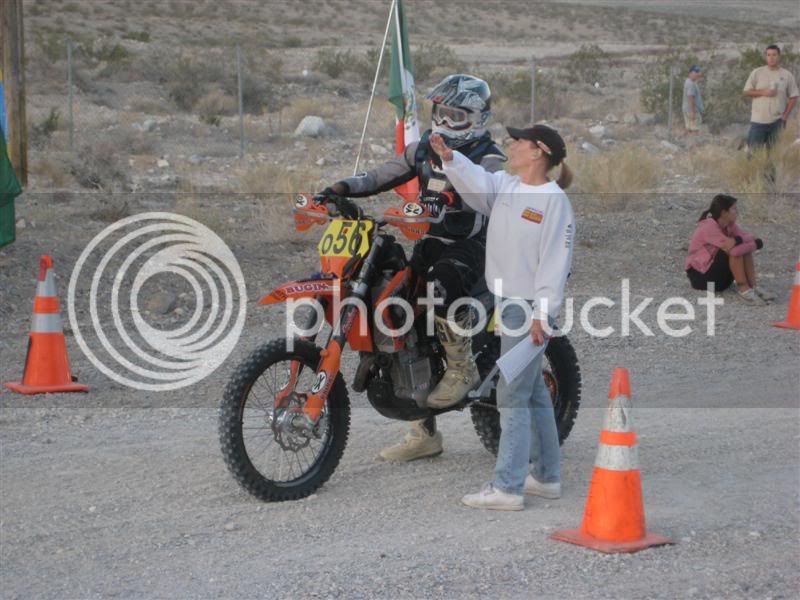 After the day 1 fall 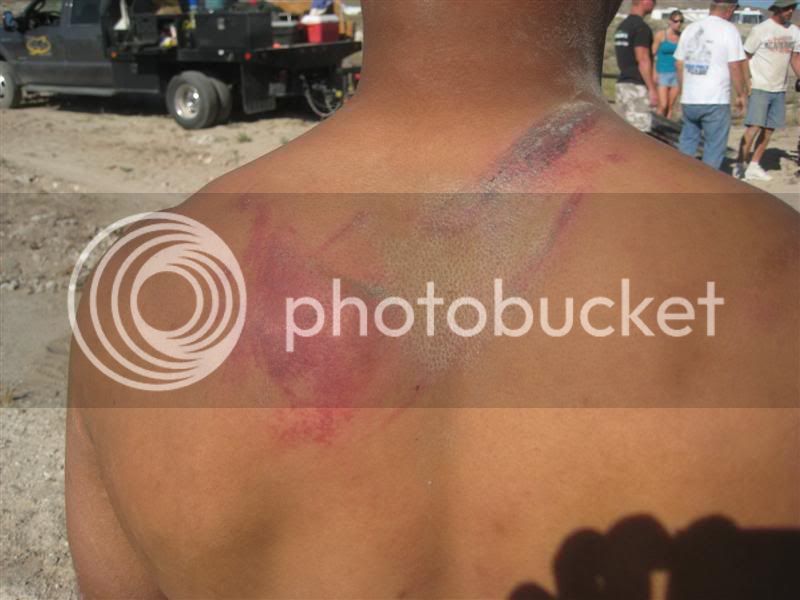 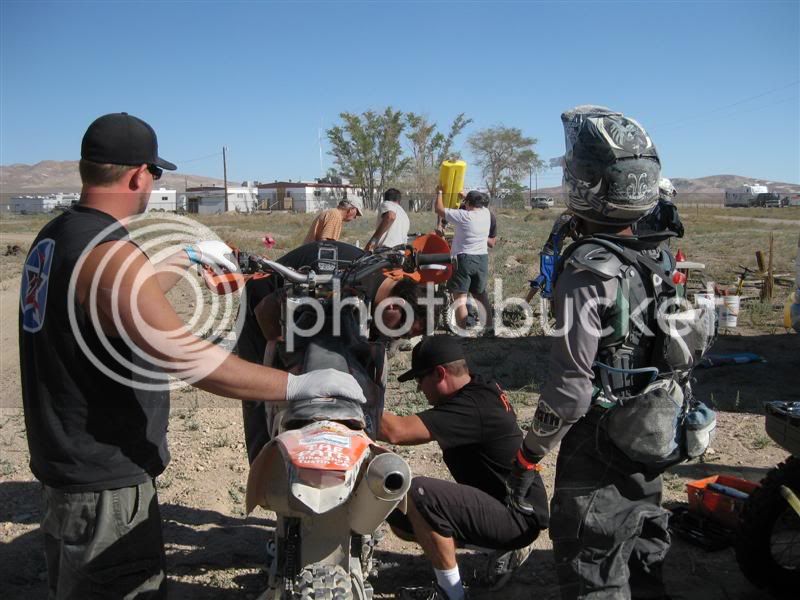 frito lay to the rescue, Sanjay didn't remember where he lost his cover. He crashed about 15 times total over 3 days. 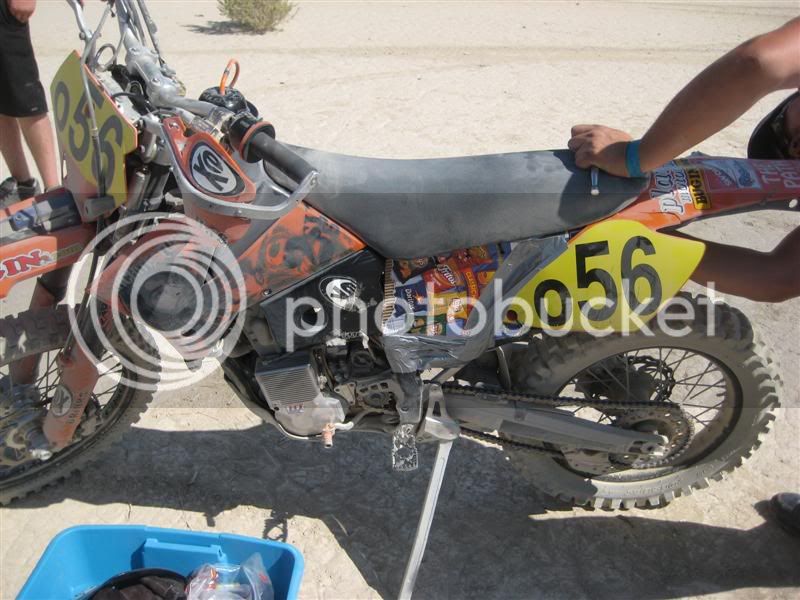 end of day 1, Mcdonalds for dinner. 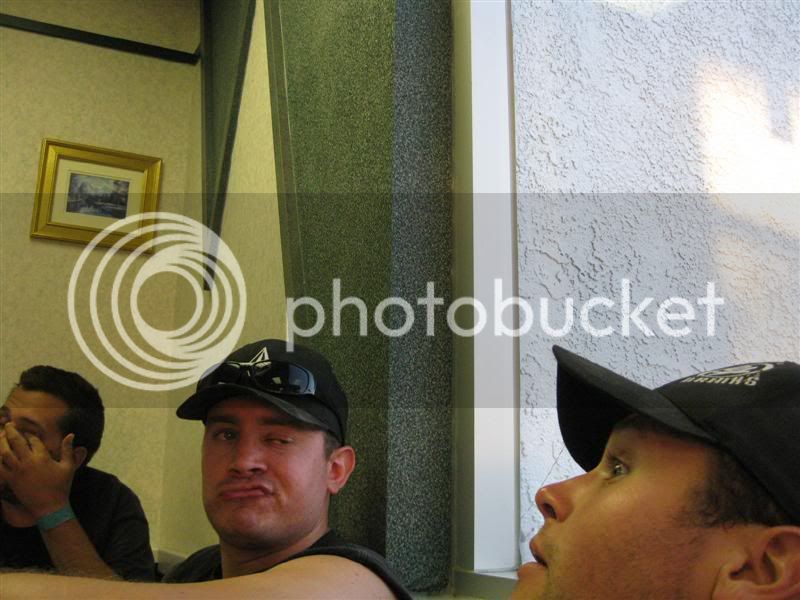 a little waiting on day 2 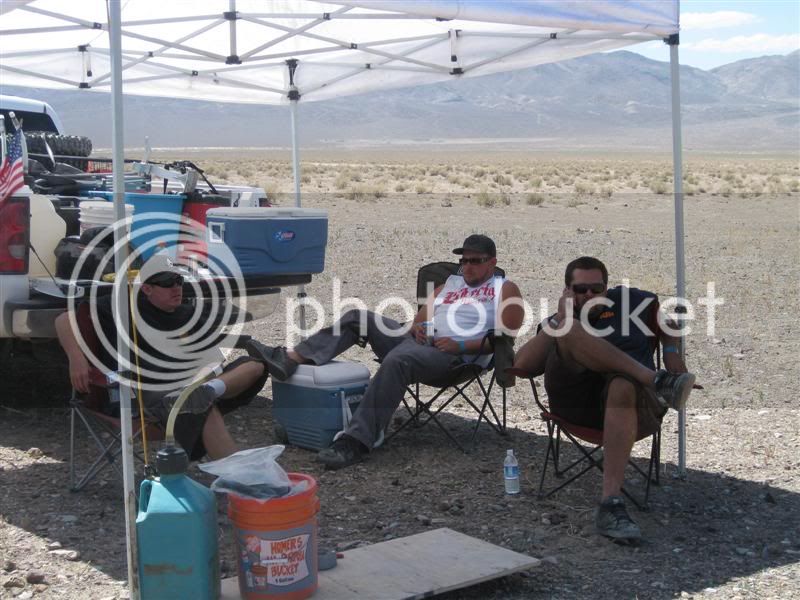 With no radio communication with Sanjay this flag SAVED us at pits. He could see it with no problem. 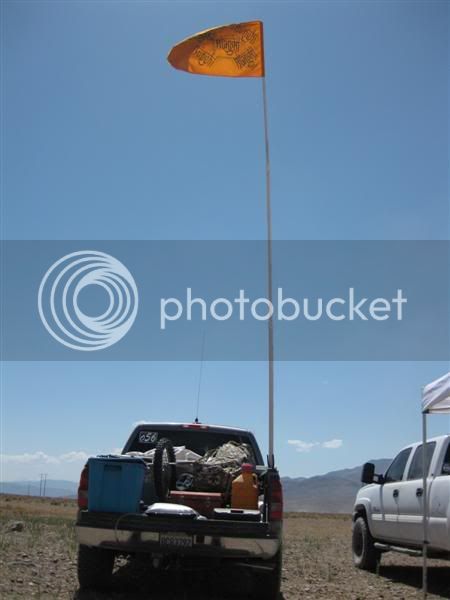 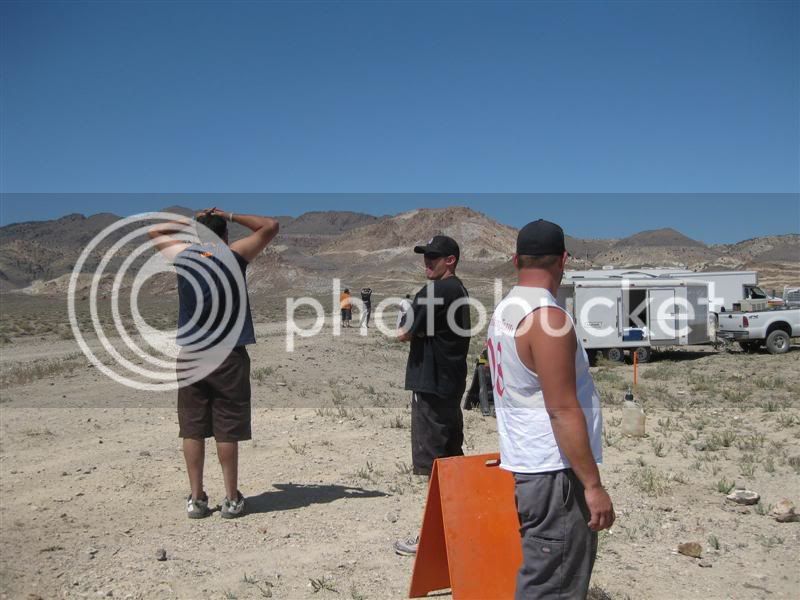 work area end of day 2 in Hawthorne... Lots to do that day 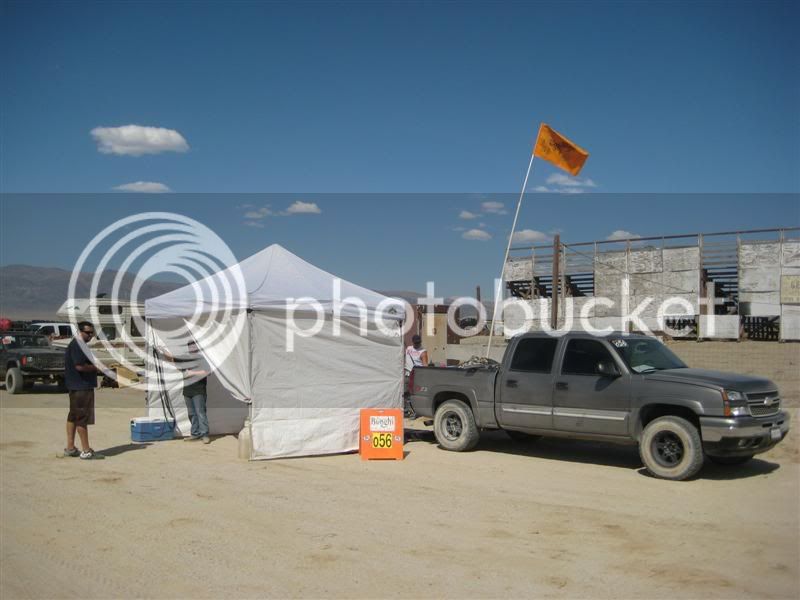 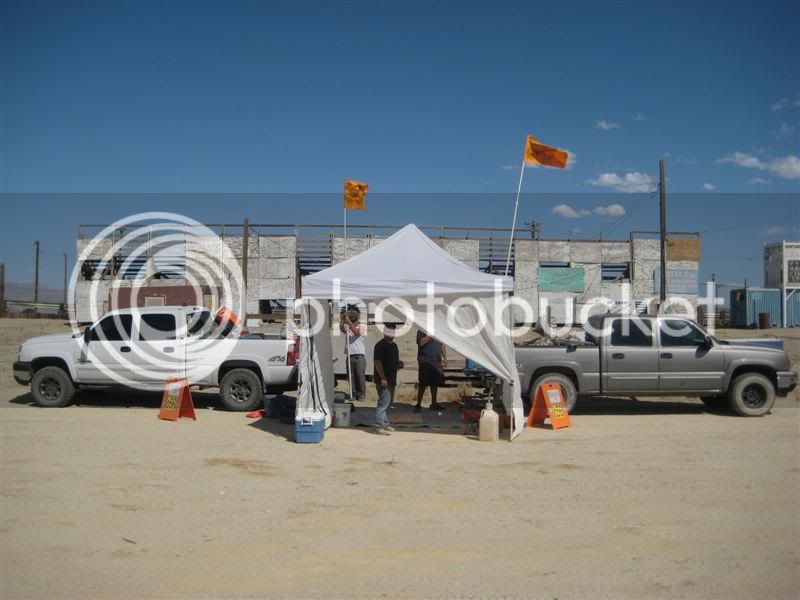 The taco'd wheel from day 1 was pretty much done for. 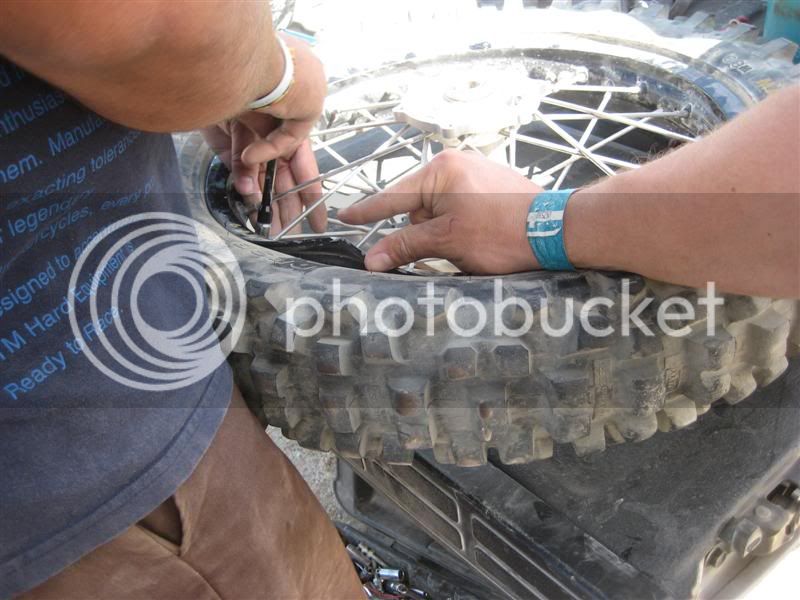 I had to do a little re-wire 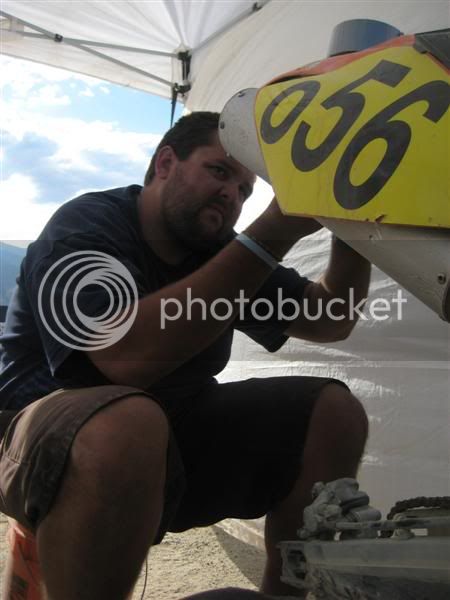 Tightening the front spoke, they were super loose. (Notice the missing skid plate) 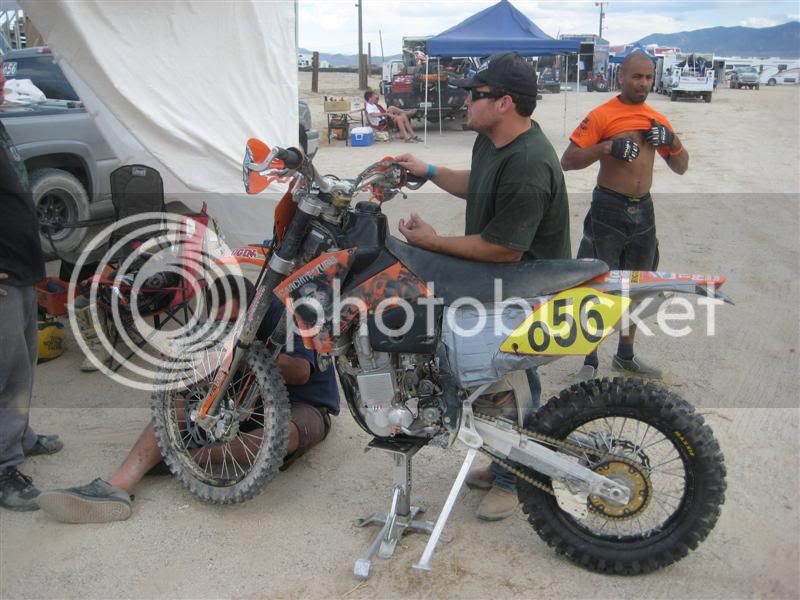 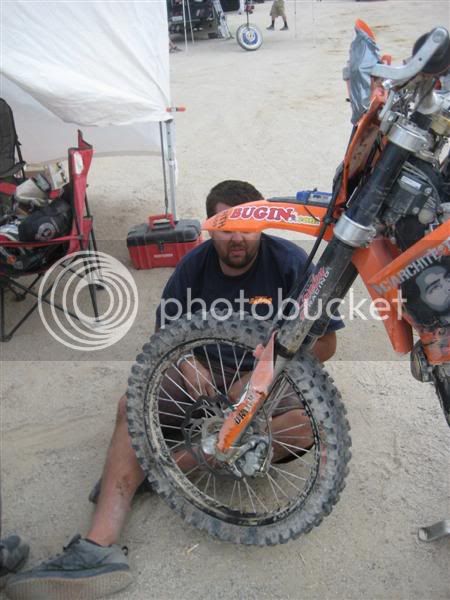 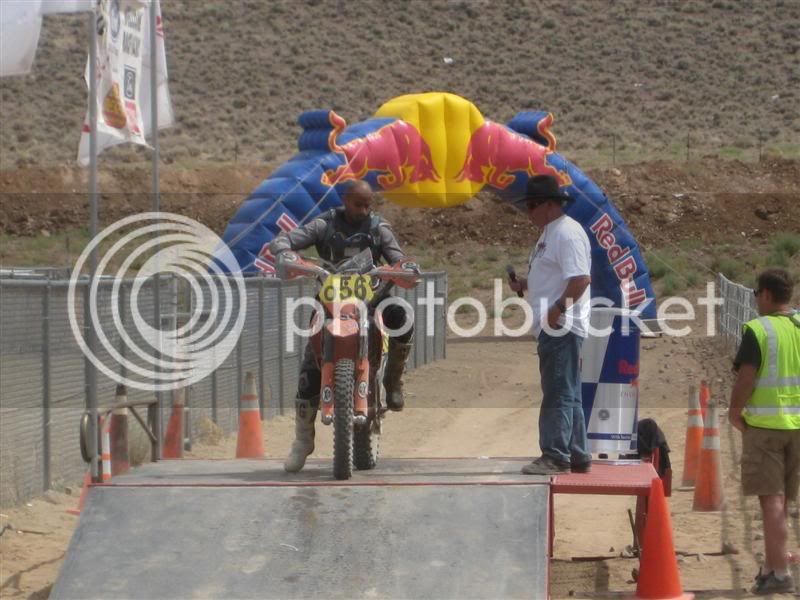 Sanjay with the whole Crew 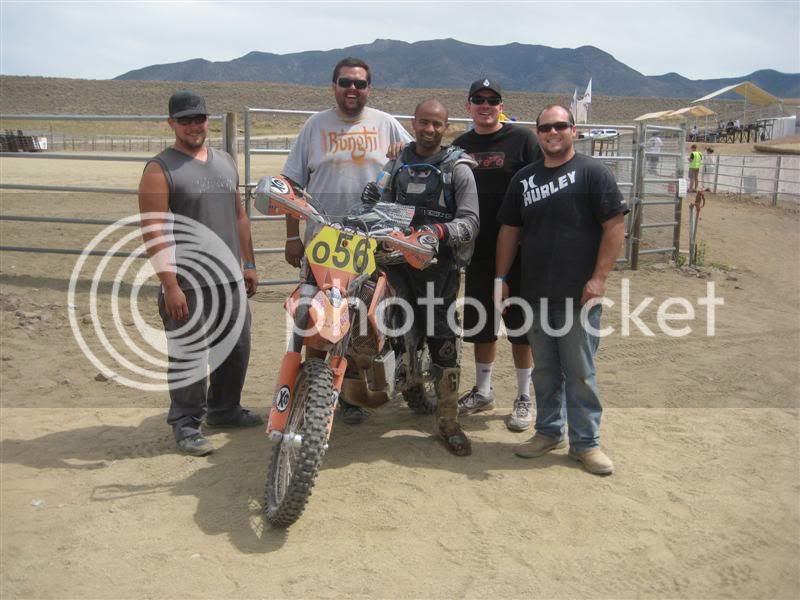 Sanjay's dad flew from Irvine to San Francisco, had a 2 hour layover then flew to Reno where he rented a car to meet us in Hawthorne Friday Night. He chased with us on day 3 got to see his son cross the finish line then caught a flight home after the awards on Sunday. Amazing! 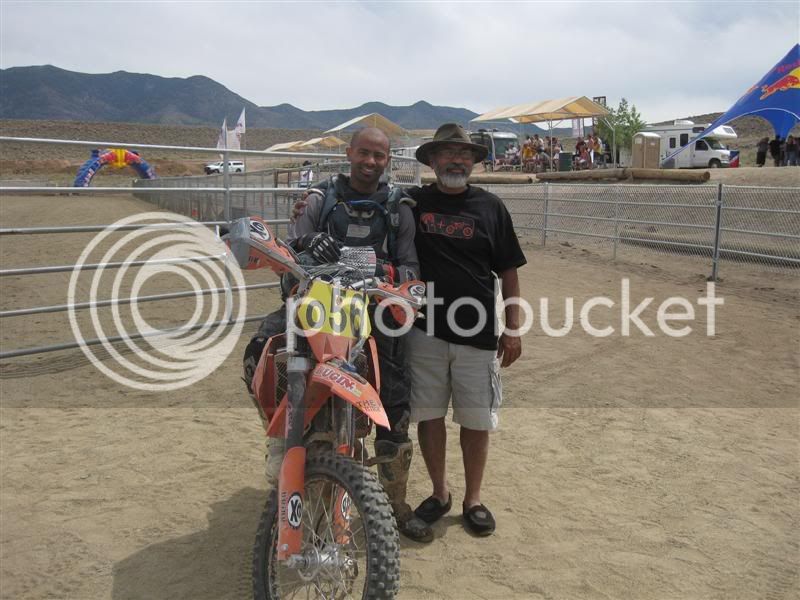 I don't even want to think about the work that needs to be done... 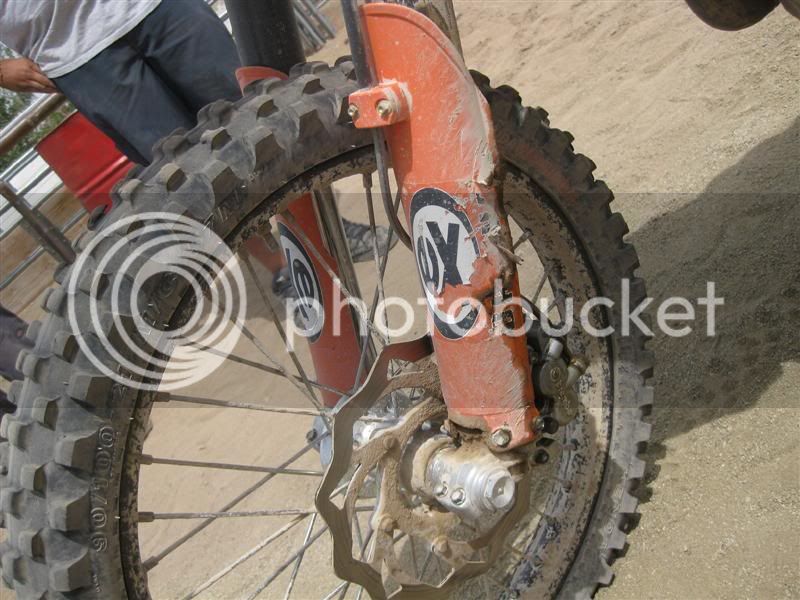 He's not much of a talker, and we dont have any major sponsors.. He thanked the inventors of Zip-Ties and Duct Tape 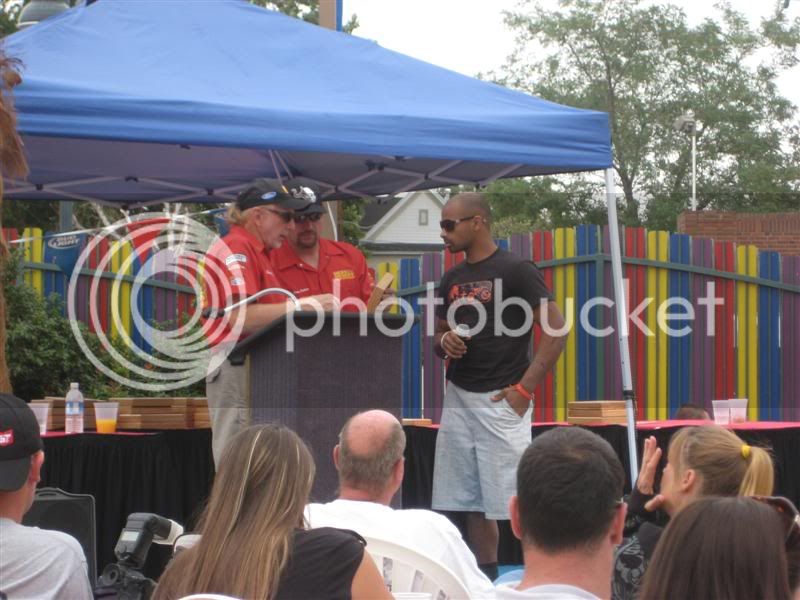 The Crew: Rudy, Mike, Sanjay, Me and Nick. 5 friends, we chased him from beginning to end. 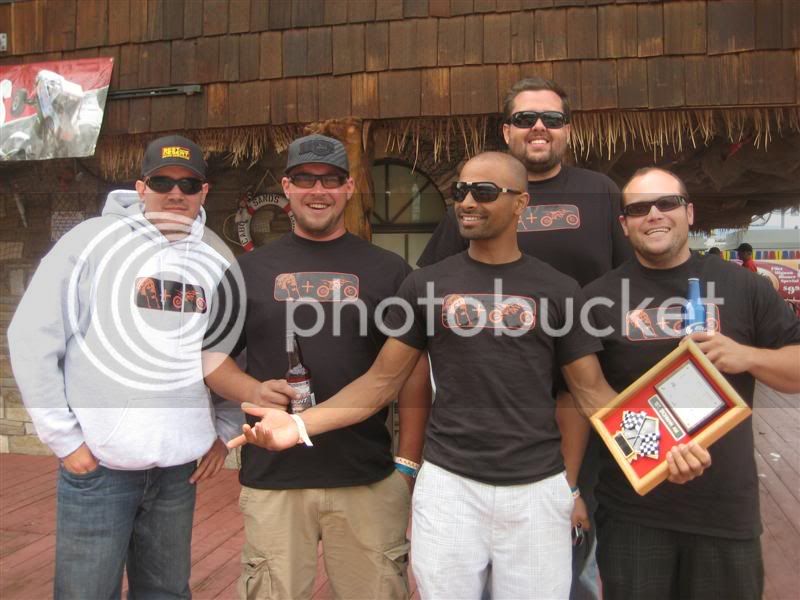 We're looking for a new sponsor 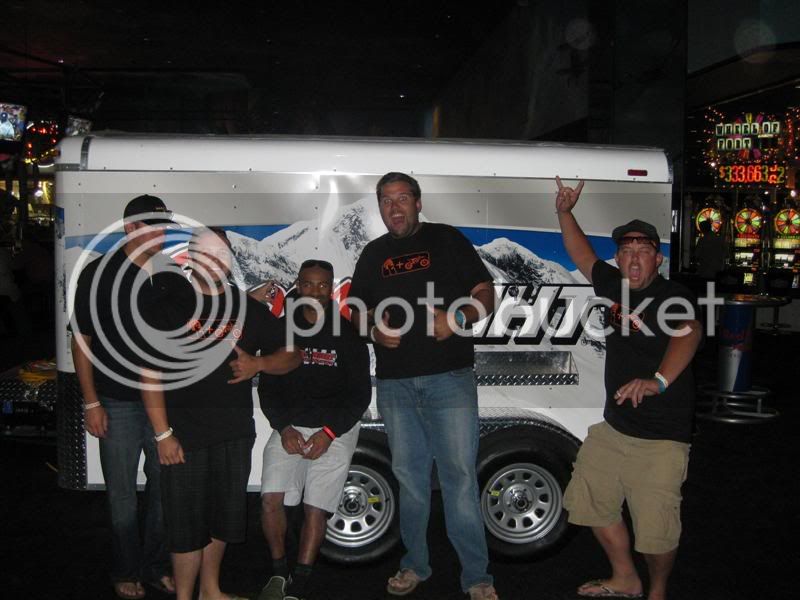 What a mess, but worth every second... 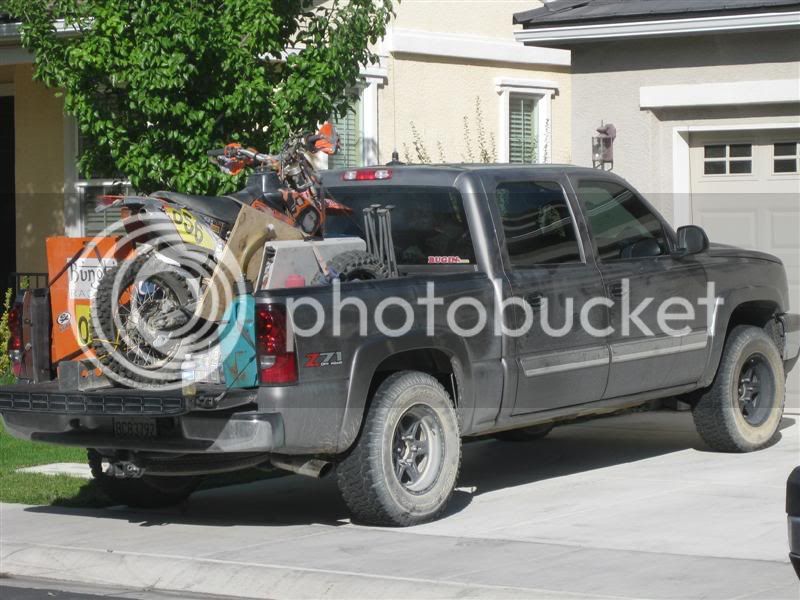