So I have an opportunity to own a class 9 race car in a trade and I'm pretty excited about it but at the same time I don't want to get in over my head. My plan is to actually race this car but I'm completely new to the racing scene and I live in Colorado where there isn't a whole lot of racing going on, at least that I know of. I've been researching a bit on this class and it seems like it would be a good for a beginner and its one of the less "expensive" classes which is good for me, because I'm still not sure if this is worth it. I'm just wondering what all is needed to be in a race, like do I need a "race team"/ crew or could I just go by myself? Do I need to take any courses or can an average joe just show up and race? Also how much does a built car normally cost? Any input would be appreciated! 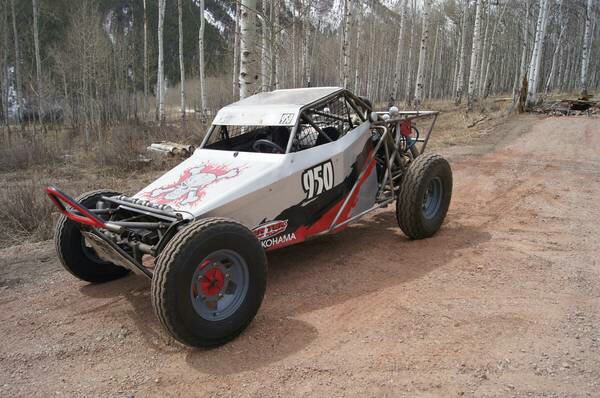 Sent from my SM-G900V using Tapatalk

Most of the Fire Guys racing team is from Colorado. Great people to join up with when you decide to come out here to race Fire Guys Racing
Maximum Attack.
B

Anyone can race, no classes needed. Class 9 is a great beginners class, especially if you can turn a wrench, because much of the prep and repair can be done by yourself. Whatever you think it will cost to race, double that number and you will be in the ball park for having a hobby. If you want to be serious and race for points and season championships, triple it. As far as crew/chief- I have gone to races with my wife, kid, and one friend, but we have always been able to find folks to split pits with and share help. The 9 guys will all support this thinking. And what Dave said about fireguys- Send a message to either Jason or Paul, they can give you great advice.

C.O.R.E runs races in Deertrail, an hour east of Denver, on a 10-mile course. I just go there on the quad but it's a fun track, not super rough, no whoops, well-suited to a limited travel car.

Also look on the Class 9 forum on this site.
R

Awesome thanks for the reference I'll go look them up! I was hoping you weren't gunna say that about the cost but I guess that's part of it. I think it sounds like an awesome experience but I'm afraid I won't be able to afford it. How hard is it to get a sponsor? Haha

rustyb said:
C.O.R.E runs races in Deertrail, an hour east of Denver, on a 10-mile course. I just go there on the quad but it's a fun track, not super rough, no whoops, well-suited to a limited travel car.

Also look on the Class 9 forum on this site.
Click to expand...

Ya I've been to CORE before they have a pretty cool set up. They have about 1 race a month which seems doable

Sent from my SM-G900V using Tapatalk

BOR (Bonneville OffRoad Racing) runs in Utah. We're planning on holding another race in Vernal, UT in late June, not too far from Colorado. I would say about 1/3 of our entries for the 2015 race came from Colorado. Entry fees around $500 or less for PRO.
Kyle MacArthur
BOR Race Volunteer
www.bor-racing.org

I want a 9 car too but I got a lot of input and don't think it will work for me. I'll follow this thread.
I don't know any other 9 racers on here but hopefully mdepue chimes in, he gave me a lot of info.

For more Class 9 info I would go here:
Class 9

If getting a team is an issue I would focus on SNORE for the Battle of Primm in Feb and Rage at the River in December. Both are big 9 car races, dez short course style and require little help to race.
https://www.facebook.com/3amigosracing
B

Where in Colorado are you?

CORE is a great place to learn to race and dial in a program. I pitted for a golf cart and ultra 4 car who raced most of the season out there. It's cheap and relatively easy on cars compared to a Nevada or California desert race. Finish a couple races out there before you start towing your junk 8 + hours to race. It's a lot less painful to break in the first 20 miles when you are 2 hours from home than spending the money to go to a Vegas based race.

As far as needing a crew at core you can usually get away with out one or 1 or 2 guys. We all kinda help each other out and if you needed help fueling or fixing something you can usually find some help.

There's also YORR races up in Wyoming/ Montana/ South Dakota. We went up to the Sturgis race and it was a blast.

Is your car going to be the old Schankmobile? well suited for BAP and RATR.. for info about 9 cars, costs to run abd people to race with go here Class 9
https://www.facebook.com/3amigosracing

Just do it!! You won't be upset. Some of the best times I had was racing in 9. You said "RACING".... Nothing is cheap, how do you know if you don't try. Plenty of great people out there to help especially in the lower level cars.


Sent from the RDC Mobile App. Get it for your IOS device today
Tapped is what I do,,,, T-Baggin is in the blood!\m/

ok, i guess i can't pretend i didn't see this thread...EYE ended up and bought the Schank/Mohr mobile.Dragged it into my garage this evening, in fact. I feel like a TOTAL d*ck- i had no idea anyone else was 'looking at it'- didn't see the thread till last night.

I pretty much have Barrel's plan in mind- do some core races and learn from my mistakes, then hopefully make different mistakes at a more distant race. Considering at least one south-of-the-border race, which and when depends on the severity of my mistakes. Rage is going to be my default plan, i think.

Jeepers, this thing has been passed around like a $10..well..you know. Got it from a guy up near Aspen; like the ad said, he and his buddy bought it with the best of intentions, and didn't get anything going. Seemingly it sat for 3 years or so.

So who else had this thing? I know Schank (i can see the outline of the sticker), and Mohr. He mentioned it ran under two other numbers. Anyone know who else?

Clearly its been stored inside, and not just 'in a barn inside'..buuuut...all the tubing has really light surface rust. Almost like the rust you see from condensation on stuff stored in a basement.

Oh yeah- I heat-gunned that Flaming skull thing off the front within 45min of being inside. :-D

go here and all q's will be answered ..Class 9 has its own forum on RDC

I may get some hate for this....make the drive and head to SNORE and race with good car counts.. the other ideas I get it.. but racing out of class or with no one is not much fun.. BAP and RATR while a 700 mile drive is a hassle, those races have great car counts a 2 day format and no chase support needed.. in my view its the only way to go..

I would make a spare set of arms, spindles and BJ's and change them out after race day one. Bring a spare rear and front tire, and ask for help from the other 9 guys when you get there.
https://www.facebook.com/3amigosracing

The other class nine guys out there are great. I had the chance to navigate at a More event earlier this year, for a guy just like you, bought a car and was convinced by the other class nine guys to go out and race it that weekend. Car count was great, and plenty of great racing within the class. Those guys are all like a small group of family, who are willing to help one another out. Like 3 amigos said I would recommend you get a hold of a few spare sets of arms, spindles, and ball joints, as it seemed many, including us had issues with them. Also, I know Tri-State Motorsports is out at most More and Snore events, who can help out with pit support for a small fee. Good luck!