Co Drivers interstring Read, What does yours do? 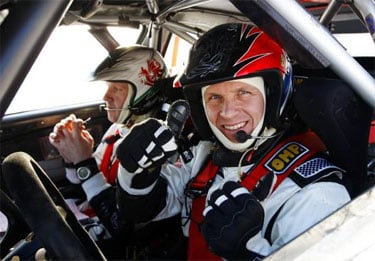 Top British rally driver, Mark Fischer, today found himself at the center of a storm of controversy after confessing that he had absolutely no idea what his long-term co-driver, Gethyn Davis, was talking about during races.
It had been assumed that co-drivers were reading ‘pace notes’, a series of instructions describing how to negotiate the road layout ahead, but Fischer claims the notes are ‘total nonsense’ and that he has simply been humoring his co-driver all these years. ‘It’s just gibberish,’ he said. ‘But the regulations say that there must be two people in the car at all times during the race, and Gethyn was a good mate so I always just took him along for the ride.’
Davis is reported to be furious at Fischer’s statement and maintains that they were equal partners in the team, but Fisher has been quick to dismiss this.
‘Oh, come on,’ he said. ‘I mean, ’50 5-left and stop 2-right half minus braking into K-right 90 maybe and absolute crest 500′. What the hell am I supposed to make of that when I’m flat out over a jump sideways at 90mph?’
This is not the first time Fischer has courted controversy over the role of co-drivers. In 2009, after finding himself without a co-driver for the Jyvaskyla Rally in Finland, he kidnapped a homeless man and forcibly strapped him into the passenger seat to ensure that the two-people-in-each-car rule was complied with. The stunt only came to light when onboard footage taken during the race revealed that rather than reading the ‘pace notes’, the Finnish co-driver was in fact screaming the words ‘Oh poop!’ over and over again, occasionally interspersed with other phrases including, ‘Watch out for that house’ and ‘Slow down, you mad bastard’.
Max Hanberg
Thinking about the Baja & V2R 24/7

Haha! That guy is my new hero.

That’s the best thing I’ve read in a long time. I hope he does an autobiography some day!

Blahahaha! Thanks Max! I'd sometimes asked myself when watching a rally, " can't that guy STFU? He's distracting me AND the driver!"


Sent from my iPhone using Tapatalk
Click to expand...

Looks like i got me a new signature.....hahahahaahhahaha. Nice Zambo, If i were drinking coffee it would have been all over the computer screen.
All I want to hear out of you is “speed zone”, “we’re on fire,” and “I got the fat chick.” Zambo

I used to co-drive for a couple of guys that wanted every freakin turn called out like a Rally Driver. After a while I lost my voice and that was the end of that. So the next race I told them that I would be just calling out the blind turns and dangers. If they couldn't drive the car without a babysitter in the right seat they should let me drive.

As a bike racer, I never had anyone calling out turns or dangers. So in all honesty, I don't really need it. It can make you go faster if you know what is coming up, but once again, as a bike guy, I could pretty much memorize 250 miles of race course after two pre-runs.

The part of the OP about the homeless guy in the car is awesome!
B

The codriver is there to do what the driver wants them for. I was watching one of those stupid "reality" shows where the codriver yelled out every damn turn at KOH.....I would've kicked him out of the car!

I call out hard 90's, S turns in straights, cattle guards/gates/power poles, prerun marked hazzards, and speed zones. I try to talk as little as possible unless I detect the driver is getting complacent. I also work the poop out of the horn and watch our mirrors. As far as I'm concerned, the driver shouldn't need to be staring at a mirror or at a GPS screen.

Most importantly, I'm there to monitor the car's vitals, change tires, make repairs, and communicate with our crew. I'm not a talented driver, so the only time I give driving input is when I see a dangerous situation developing, or a situation in which I know we are better off playing it cautious.


Sent from my iPhone using Tapatalk
Click to expand...

Was I the only one hearing Cyril explaining crest 1 Right 3 short left 6.... too another truck, which I assume Jake was in writing notes, on Thursday, in the Ojos area? They were on BFG relay, and we happened to be monitoring one one radio while heading out to & from running that area. My pilot asked me to start calling by number, clock hand, this race instead of 45, 90, ... at the end of the night, he felt it was a better tool and made us faster. mimicked his old Video game.
DB_115

This is how its done.

How many of the top dogs are using rally style notes/call outs?

How could Sports Authority have gone out of business with all that media exposure....?
IG: honda131

Funny read there Max. I can only imagine if you had one of those Navigators rattling off nonsense for a 1000 miles. I bet you would sell the two seat for a single! Like BB&G said above, the navigator is there to help the driver and what he wants for feedback is what he should get. Monitor speed, temps, pressure, RPM in silt beds and when pushing it. Mirrors, horn and relay back to Chase. Writing/Reading notes on paper is not only old as dinosaurs but it's ridiculous in an open window car. GPS can zoom in for granular view or you can zoom out for 1000' view. And what do you know? The hazards are marked right there! Too much info is a negative; as well as, not enough. That's what makes a good team. The balance between the two. And when Sh@t hits the fan, mechanically, it's always helpful if the navigator knows his way around the car. It's better to be a problem solver than have diarrhea of the mouth.
Last edited: Jun 4, 2018
John Cox
Car 1248
Maryland

That was funny, the pic is of Petter Solberg though. I think it is satire or made up BS.

I have been in both seats, I think in a lot of ways being a good co driver is tougher physically and harder mentally to stay focused. It is pretty easy to be a mediocre co driver and just sit there, but to keep attention on everything you need to keep an eye on and be the best you can be is difficult and fatiguing.

A driver gets into a rhythm and stays in tune with just driving, and it seems like a driver does not feel hard hits nearly as bad as a co dawg getting blindsided while looking at the GPS or gauges.

Samco Fab said:
A driver gets into a rhythm and stays in tune with just driving, and it seems like a driver does not feel hard hits nearly as bad as a co dawg getting blindsided while looking at the GPS or gauges.
Click to expand...

How nice of you to say!

I tend to talk... a lot. I check gauges, check mirrors, check GPS, repeat... for hours. Even if there is nothing on the GPS I'll let the driver know that we didn't mark any cautions in prerunning. I guess I don't have JDDurfey's photographic memory.

Having a good co-driver that can call 1-6 turns off the GPS and a driver that knows what they mean can get the car in a good rhythm. Especially at night when you really can't see beyond the lights.
“People who have never been to Baja, they don’t get it.”--Don "The Snake" Prudhomme
Share:
Facebook Twitter Reddit Pinterest Tumblr WhatsApp Email Share Link
Top