Columna Medica Baja Poland, the seventh round of this year’s FIA World Cup for Cross Country Rallies, scheduled at the last weekend of August, will begin the final stage of rivalry. In the Spanish Baja Aragon, Nasser Al-Attiyah grabbed fourth win in a row, extending his lead in the overall standings. However, there are still four rounds to the end of the season and plenty of points to take.

The first round of the season, Rally Baja Russia Northern Forest took place at the end of February. The Latvian competitor Maris Neiksans won the event, overtaking Vladimir Vasilev and Andrey Novikov. Polish crew Marek Dąbrowski and Jacek Czachor couldn’t make all out of their start, as their car broke down during second day of the rivalry. At the end of the day, the ORLEN Team crew was classified on 12th place. We were witnessing an outstanding performance by Aron Domżała and Szymon Gospodarczyk though. The Polaris crew won the T3 class and were classified on 7th place overall.

Abu Dhabi Desert Challenge, the second round in this year’s calendar, was held at the beginning of August. Nasser Al-Attiyah was celebrating his second win in the event, while the next two steps on the podium went to Yazeed Al Rajhi and Mikko Hirvonen. Poland had a strong team in the event, while the best turned out to be Kuba Przygoński (5th) and Dąbrowski (8th). Domżała maintained a good rhythm winning the T3 class once again.

At the end of April the FIA World Cup for Cross Country Rallies moved to Qatar, the scene of third round of the 2016 season – Sealine Cross Country Rally. The local hero Nasser Al-Attiyah won for the second time this year and managed to extend his lead over Saudi Arabian Yazeed Al-Rajhi. The best Polish squad, finishing sixth overall, were Dąbrowski and Czachor. This time Domżała crossed the finish line on third place in T3, while Robin Szustkowski and Jarosław Kazberuk managed to stand on the lowest step of the T2 class podium.

After events in the Middle East desert it was the high time to move back to Europe and the whole grid fought in Italian Baja. The fastest drivers in this event were Al-Attiyah and American Bryce Menzies. The duo fought for the win until very last kilometres of the rally. Finally, the leader of FIA World Cup for Cross Country Rallies managed to overtake his colleague and stood at the highest step of the podium for the third time in a row, outpacing Vasilev and Dąbrowski. The T3 class rivalry was once again dominated by Domżała (Polaris RZR 1000.

Galaxy of stars appeared during the fifth round of FIA World Cup for Cross Country Rallies – the Spanish Baja Aragon. The leader of the Cup Nasser Al-Attiyah fought with Nani Roma – the 9-time winner of the event, as well as with Mikko Hirvonen and Carlos Sainz. The driver from Qatar was unbeatable again, overtaking Sainz and Hirvonen. Great performance by Polish crew Marcin Łukaszewski and Magdalena Duhanik was also seen as they finished the difficult debut on 7th place overall. Aron Domżała didn’t manage to fight for the win due to technical issues. The Pole lost second place and had to settle for 4th.

Columna Medica Baja Poland will begin on Friday, 26th of August afternoon and will end on Sunday, 28th of August. The total distance of the rally is 788 kilometers, 472 of which are special stages.

We will see for first time in competition the new Ford Raptor T1.
It is basically a Zapletal Team clon of his Hummer now with Raptor body.
Zapletal has developed his cars with multiple options.
For many years he have used Hummer body with Toyota engines, then switched to Ford Mustang engines.
This new Raptor will have a 5.0 Mustang V8. 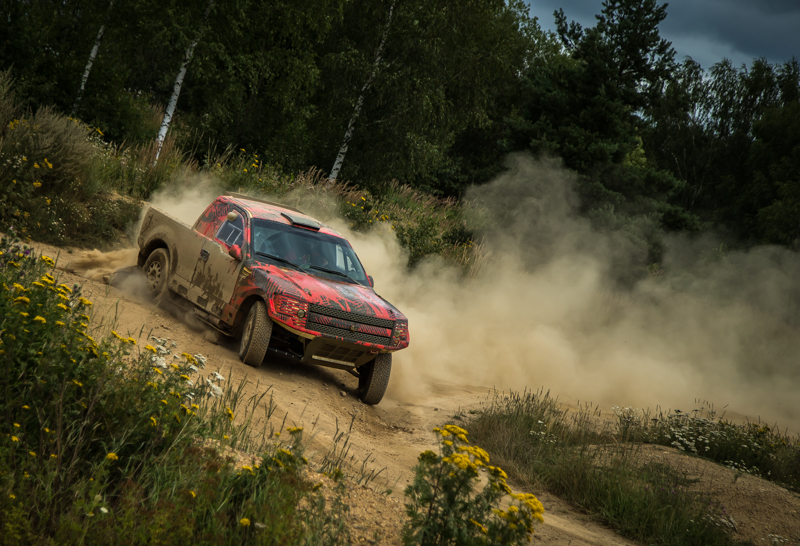 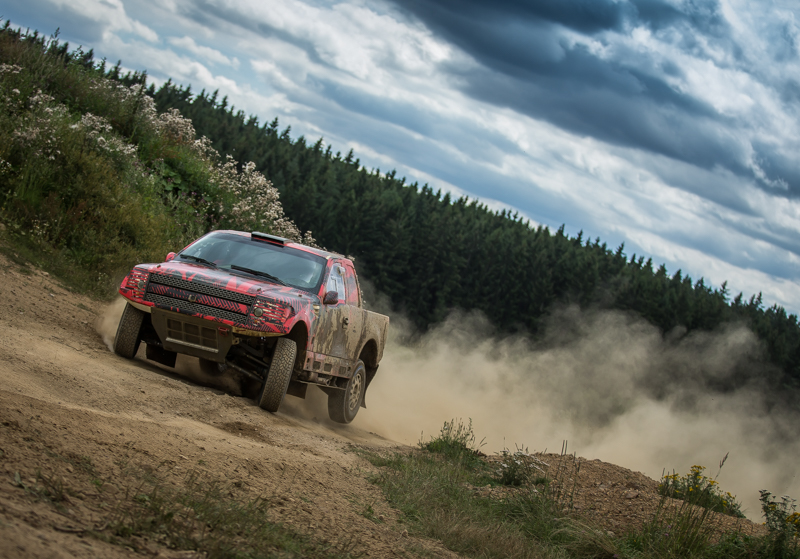 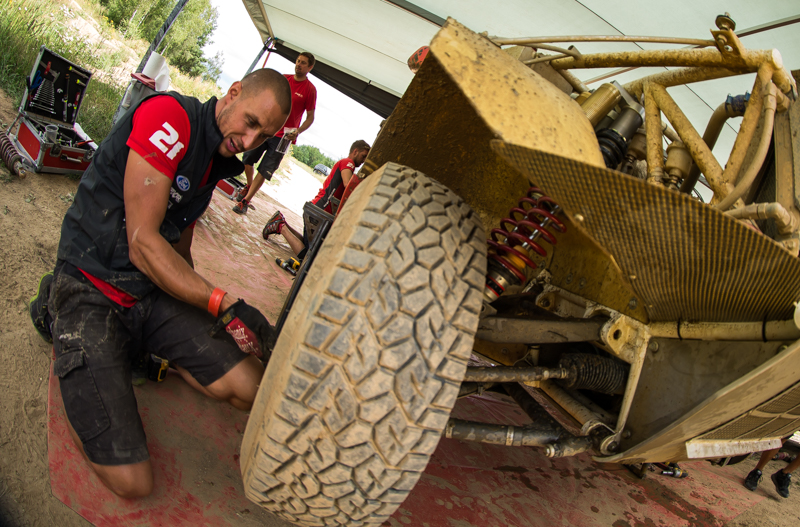 Cherednikov had this at Dakar so not new
M

This red one is for Martin Prokop but it's Ford alike only for testing purposes. For Dakar it should get a new different bodywork but it hasn't been revealed yet.

Nasser at it again! Nice effort from our dear friend Marek Dabrowski who is now second. Matt Serradori 4th overall in his 2WD buggy

Nasser Al-Attiyah (Toyota Hilux Overdrive) – a winner of Dakar Rally 2011 and 2015 sealed the victory in Columna Medica Baja Poland and grabbed the FIA World Cup in Cross Country Rallies for the second consecutive time and third in his career. The 45-year-old Qatari pilot co-driven by the Frenchman Mathieu Baumel led the Szczecin based event from start to finish.

Krzysztof Hołowczyc (MINI ALL4 Racing) who had a visitor kind outing in Columna Medica Baja Poland was second overall. The Olsztyn driver paired by Łukasz Kurzeja who declared the retirement from cross country rivalry, wasn’t able to win the Szczecin classic for the sixth time in his career. The key moment happened yesterday when during the first passage of the special stage located in Drawsko Pomorskie Hołowczyc had a puncture and was forced to change the wheel on course of the stage.

Third overall was the ORLEN Team duo – Marek Dąbrowski and Jacek Czachor (Toyota Hilux Overdrive) who overtook their team mates Jakub Przygoński and Tom Colsoul (MINI ALL4 Racing). Fifth place was taken by another MINI driver cooperating with the German X-raid team – Erik Van Loon, while sixth position was grabbed by Martin Prokop co-driven by highly experienced Ilka Minor (Ford F150 Raptor). Behind the duo there was a well-known from the Szczecin’s classic Miroslav Zapletal (Hummer H3 EVO VII), while the eight place went to Jes Munk co-driven by Rafał Marton (Toyota Hilux Overdrive). Number 9 was a driver from Chile – Boris Garafulic (Mini ALL4 Racing serviced by the German X-raid team), while the top 10 was closed by the representatives of Columna Medica – Michał Małuszyński in pair with his wife Julita (Toyota Hilux Overdrive).

Columna Medica Baja Poland was also a fifth round of Polish Cross Country Rally Championship. In this case the win went to Krzysztof Hołowczyc, who overtook Marek Dąbrowski and Jakub Przygoński. The overall standings of FIA Central Europe Zone for Cross Country Rallies are the same as Polish.

In Polish Cup for Cross Country rallies in the S1 class the win went to Tomasz Gołka/Filip Gołka crew (Jeep Wrangler), while the S2 has been won by Dariusz Krzywkowski/Bartłomiej Krzywkowski (Mitsubishi Pajero) crew. Among the motorcyclists the triumphants are Maciej Giemza (KTM EXC 450), while the UTV category has been won by Robert Dorosz/Michał Osuch pair (Polaris RZR 1000). In Q2 the fastest was Piotr Serbista (Yamaha Raptor 750), while Q4 – Arkadiusz Lindner (Can-Am Renegade 1000)

Nasser Al-Attiyah (Toyota Hilux Overdrive): - What a fantastic day! I feel great. This afternoon I already knew the special stages, so I was able to push even harder. We have won all five rounds of the World Cup and managed to grab the title in Szczecin. Perfect weekend.

Krzysztof Hołowczyc (MINI ALL4 Racing): - Well, this is rally and there it is pointless to speculate what would happen if not the flat tyre yesterday. We were driving on our limits and I am happy, because after a one year pause I was still able to drive very fast. Huge thanks to all the fans who were supporting us this weekend in Szczecin. It gives us an amazing power and energy.

Marek Dąbrowski (Toyota Hilux Overdrive): - We are on the finish line, but last kilometers we didn’t take too many unnecessary risk. The conditions were harsh and the organizers had to shorten last stage by half.

Jakub Przygoński (MINI ALL4 Racing): - Fourth place, it would be fine to say, we didn’t have a lot of luck during this rally. On the other hand, I am pleased with the pace, which let us drive in top 3 on particular stages. Now we have to work with the car and prepare ourselves for Dakar.

Erik van Loon (Mini ALL4 Racing): - We are finishing the rally Columna Medica Baja Poland on fifth place, but if we look closer on each stages results, we’d see our pace was much better than this. This is positive.

Miroslav Zapletal (H3 EVO VII): - It is not a result from my dreams, but we are happy to bring the car home in one piece. I really like the Szczecin’s rally, although it ended so quickly!

Martin Prokop (Ford F150 Raptor): - Yesterday it was much better for me, on Sunday’s special stages it was too harsh sometimes. Sixth place for the beginning of new adventure with the car is optimistic. Now we have to focus on changing the engine and pre-Dakar preparations.

Jes Munk (Toyota Hilux Overdrive): - It was a great rally, I really like the Polish World Cup round. I am pleased with the result.

Tomas Ourednicek (H3 EVO I): - One stage before the finish we had a flat tyre, but at this point we had no chance for a great result, so we manager to enjoy the ride itself. It was very hot and the air-con was not working.

Michał Małuszyński (Toyota Hilux Overdrive): - We are very exhausted, so the first task after the rally will be to improve physical fitness. Amazing experience, which gives us space to work on. Many thanks to my wife, Julita, who has done a great job as my co-driver. I am speachless.

Marcin Łukaszewski (BMW GPR Series 1): - We did everything we could. It’s good to be on the finish line, but we have to forget about this rally as soon as possible. Another lesson and valuable experience.