For all of you "testing" or recreating in the Jean/Primm area, please read this and see what could happen to you monetarily if it is found you caused a tortoise "take: (See definitions of "take). This is no joke guys and as the Primm/Jean area is under extreme microscopic scrutiny currently, you really, really need to pay attention out there whether you're recreating with your family or "testing." It would be a shame to see anyone be penalized to this magnitude for an accidental "take." As the saying goes, The Hills Have Eyes...

The desert tortoise is listed by the U.S. Fish and Wildlife Service as a threatened species. Under the provisions of the Endangered Species Act (ESA), anyone who takes (the term "take" means to harass, harm, pursue, hunt, shoot, wound, kill, trap, capture, collect, or attempt to engage in any such conduct) a tortoise is subject to civil and/or criminal penalties of up to a $50,000 fine and one year in jail, or both. BLM assists the U.S. Fish and Wildlife Service in the enforcement of the Act. The desert tortoise is also considered by California to be a threatened species with associated penalties.

BIOLOGY: Like other reptiles, the desert tortoise is cold-blooded. To survive in the desert, the tortoise estivates (remains underground in its burrow) during the hottest times of the day during the summer and hibernates (sleeps underground in its burrow) during the cold of winter. Tortoises come out in the spring to eat grasses and wildflowers and drink water from the spring rains (although they obtain most of their water from the plants they eat). Also in spring, they socialize and look for mates. At other times of the year, they are less active above ground.
The desert tortoise reaches sexual maturity between 10 and 20 years of age. The females lay from 2 to 14 ping pong ball size eggs. Since a tortoise may live for 60 to 100 years, many eggs will be laid in a lifetime. However, only about five out of every 100 hatchlings will survive to become an adult tortoise. For the first six to eight years, the young tortoise's shell is no thicker than your fingernail, and therefore, it is easy prey for many other desert animals, especially the raven.
Many human activities also threaten the survival of the desert tortoise. Some of these include:
SOME DOs and DON'TS:
1. If you find a tortoise in the desert, DO take pictures, get down and look at it (but not so close that you disturb it). Watch to see how it moves and what it eats, then walk away and know that you have done a good deed by letting it live in peace.

2. While driving on desert roads, DO keep an eye out for tortoises crossing the road. If you encounter one and have plenty of room to pass, drive slowly and carefully around it. If the tortoise is in immediate danger, pull your car over and stop in a safe place. Carefully place your fingers under and thumbs on top of the tortoise's shell, grasping it on the sides. Keep your hands away from its head. Lift the tortoise slowly and gently, keeping it level and close to the ground, as if it is in a walking position. Move it to a safe place no more than 100 yards away and in the same direction that it was traveling. Carefully set it down, preferably in the shade of a shrub.

3. DO check under your car or truck before driving away. Sometimes a tortoise will seek the shade underneath a parked vehicle.

4. If you want a pet tortoise, DON'T take one out of the desert! DO call the California Turtle and Tortoise Club: Ginger and Gary Wilfong at 510- 886-2946. The Wilfongs can help you adopt a tortoise and obtain a free permit from the California Department of Fish and Game to legally keep a tortoise.

5. If you get tired of a pet tortoise, DON'T let it go in the desert! Release of pet tortoises violates the Endangered Species Act and can spread the deadly Upper Respiratory Tract Disease. Call the number listed above to find a new home for your pet.
Jamie "GiGi" Fagan
God Bless America and Our Troops

Good info. Thanks for posting! I have seen 2 tortoises this year. It was really cool. I had never seen any in the desert until then.

Thanks GiGi!!! I came accross one on my dirt bike a couple years ago. It was in the middle of the trail so I picked it up and moved it out of harms way. I wasn't sure if that was the 'correct' thing to do until I just read your post. It made sense at the time, and I guess I was right. I'm not an eco-terrorist after all.

So can we sue the federal agency for 50K a pop that decided it was a good idea to relocate some of these desert tortoises (Many of which did not make the it to the relocation) to make room for a the expanding military bases?
AMERICA BLESS GOD!

The ONLY place I have ever seen a turtle in my years of racing and spectating is Ridgecrest and that was during the middle of a race when we stopped and moved the turtle out of the MIDDLE of the race course!!

it's the same thing with sea turtles. $50k and maybe a year in jail if you mess with them while you're snorkeling.

there are people sitting in jail cuz of this.
When in doubt, paddle out.

Just encountered one of these in the middle of the highway in the Nipton area. We saw it in time, went around, and since it was in the middle of the northbound lane I did move it 50 feet out into the desert and not on top of a carniverous ant population. Ill see if the photos came out.
Emulsion shocks are like cooking steak in the microwave.

So did they fine the team that relocated all the tortoises that the coyotes ate? Double standard?

Ravens are their worst enemy. Brought on from moving dumps out of the inter city limits. Ravens are not indigenous to the desert. Fact! And when will the Feds. acknowledge this and kill the Ravens off.
At 50 years of age I have seen 4 Dez Tortoise. The first was when we were kids in the 60s out in the sand washes of Lake Havasu Landing. Of course we were kids and had to have a closer look and we did. The other three were on the race course. Two, out of a burrow at one time were at a famous race that is now extinct. I moved the two of them off the course 100 ft. and actually saw a BLM Bronco parked near by on a jeep road. I always to this day, wonder weather they documented the fact that racers do care about our Dez.
The next sighting was in Nev. at a classic hare scrambles that is run still today. On the race course again. Scoot ya little bugger. No need to move this guy. It was late and the only bike behind me was the sweep rider. I know he documented the sighting.
I did see a dried up carcass one day with a buddy when we were pulling ribbon after a National H&H. You could definitely tell that he was a old codger that lived a long life in the Dez!
So my question? The Desert Tortoise has been endangered for a long time. Why do they like to hang out with us on race day!

I wonder what makes them a "threatened species"? I've seen many tortoises in and around Ridgecrest and the greater Johnson Valley areas. I wonder how many are actually out there in the less traveled areas?

Here's a couple I took pictures of, a baby... 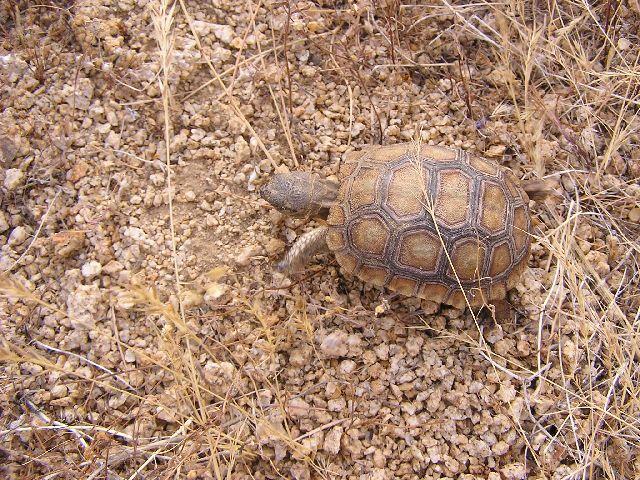 ...and an adult that was on his way to somewhere... 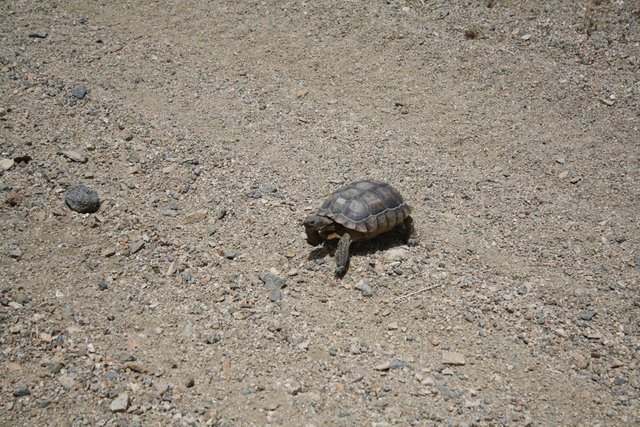 I find it hilarious that the BLM literature says, "Touch one/Take one and we'll fine you..... but if you find one and it's in danger, this is how to to move it...."

JRod said:
I find it hilarious that the BLM literature says, "Touch one/Take one and we'll fine you..... but if you find one and it's in danger, this is how to to move it...."

I am waiting for the BLM to open a capitol case against me for the thread I started here about the same thing when I moved a turtle on the way to TT250 last April! LOL!

Respitory Virus and Ravens are the 2 things that are worst for the Turtles.

Everyone wants to point the fingers at OHV use as to the demise of of the Desert Tortoise (my favorite desert critter), but I have seen more killed by cars and trucks on HWY 395 than anywhere else (never seen a dead one out in the dirt, in my nearly 40 years of living/playing in the Mojave Desert)


The only thing you see in the dirt are the shells of the babys that have been eaten by ravens.

Of all my years in the desert, I have only seen one. It was back in the late 80's out off Wild Wash Road. We were camping and it wandered into camp and parked in the shade under one of our tarps. Later in the afternoon it wandered back out into the desert.
Gadzooks Racing - JeepSpeed 1717 - 4 Wheel Parts, Rubicon Express, Bilstein, Rigid Industries LED Lighting.

Great thread GG. Too tall to need a soapbox, but here goes, HaHa

Are ravens going to have to kill a baby before BLM and the greenies acknowledge that they are the true threat to the turtles? Closing the desert down to motorized will do nothing to help the turtles and the only thing that will is removing all traces of man from every desert community and like that's gonna happen!! As someone else posted, it's area resident's trash that makes it possible for ravens in the dez and merely shutting down motorized recreation will do very little to help the turtle.

Tell politicians this when you have a chance!!!

J.D. Rios said:
I wonder what makes them a "threatened species"? I've seen many tortoises in and around Ridgecrest and the greater Johnson Valley areas. I wonder how many are actually out there in the less traveled areas?

Here's a couple I took pictures of, a baby...

...and an adult that was on his way to somewhere...

I moved two tortoise's just like that riding in may at lucerne valley on the race course got off moved both of them and away i went.
Steel Services Grinding, since 1950 Los Angeles, Ca.