Dust Junkie Racing left Southern California with one goal in mind. Tackle the Mint 400. Weeks before the race there was a debate about how many laps the Jeepspeed challenge cars would complete. The race promoter, SNORE, put an end to the debate when they announced all classes would do all laps. "It isn't the Mint 400 without 400 miles," the promoter exclaimed. This fits DJR perfectly, DJR is an outstanding team that does not know how to quit.

The 1706 PRP Wrangler participated in all the activities surrounding Downtown Las Vegas's Fremont Experience. They showed the car to the race teams and fans at the meet and greet on Thursday, then pushed the car the entire downtown section through contingency and technical inspection Friday afternoon. It was surreal being in old town Vegas racing in one of the greatest offroad racing events in history. 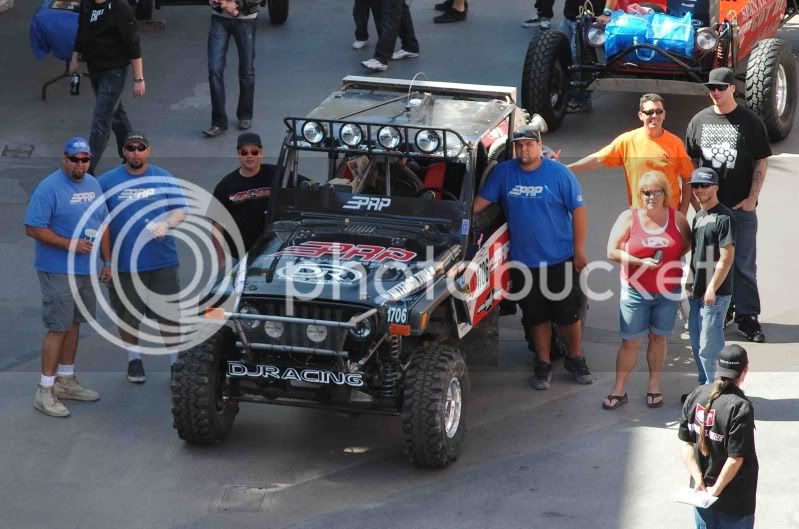 The Mint 400 is known for it's infamous 'rock garden.' The rock garden is not so much a garden as it is 20 or 30 miles of rough, technical, tire eating race course. DJR mounted every Interco TSL spare tire they had to the new Raceline Rockcrusher wheels. This last minute thrashfest ended up being trivial as neither Scott nor Tandi Hartman had to get out and change a tire. The tire and wheel package run by the Dust Junkies is second to none. 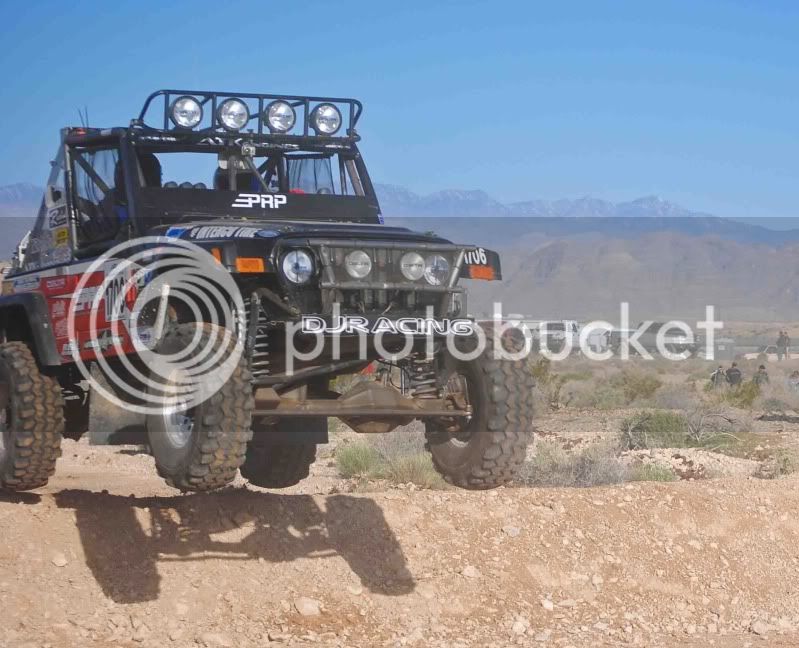 The PRP 1706 Wrangler started the race side by side with 1708 and left the line holding back a bit. It was a long race and they didn't need to get in the lead early. Not a mile into the race as they approached the first section of silt, things would change. 1708 was struggling in 2wd and all over the course. 4wd and the power of the Painless Performance 4.0 took control. As they passed on the far left, 1708 swerved into them and stopped dead on course. Hartman hit the rear quarter panel of the car crushing it and doing some serious damage to his own hood. All was fine mechanically with the car and they pushed on passing the other three cars in front of them. They settled into a smooth pace and cruised through the rock garden. Coming out of the rock garden, the car was a little loose so they stopped at pit 'A' for Brian Hartman and Marty Scott to look at the tires. All was good so they pressed on after being passed by 2 cars. They stayed smooth and fast and retook 1 car and pressed on through the rough course. The car got worse and worse until it was bottoming hard on the right rear. Dan Turner got out to look and saw that a shock seal had failed and all the fluid was gone. It was a slow ride to Pit C, where Tony Briley and Robby Hartman were ready with tools and parts to fix the wounded shock. Now down 35-40 minutes Scott and Dan set out to be smooth and slowed the pace a bit to preserve the car. 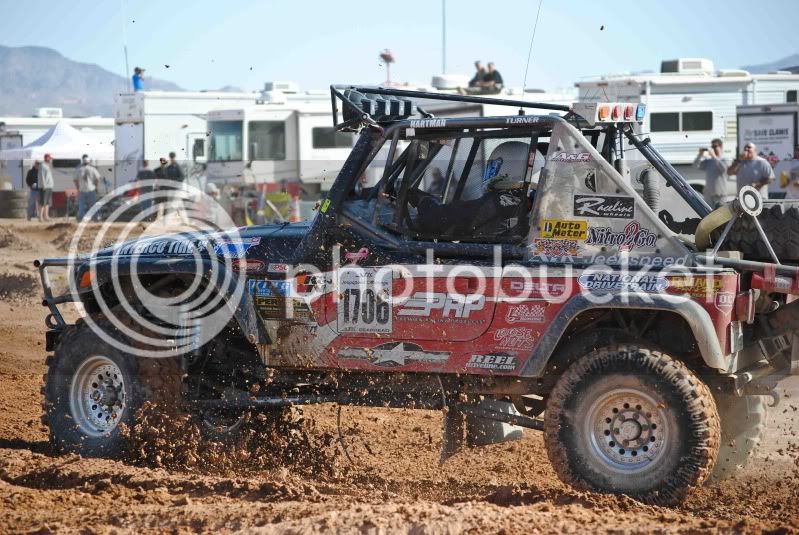 Coming into main pit there was a set of man made jumps for the fans to watch, after the second jump the throttle cable broke. The car had to idle around. Dan couldn't sit and watch more time go by and jumped into action. The PRP seats have pockets full of tools in them, so Dan grabbed a pair of pliers, resting on Scott's lap and pulled on the throttle cable. The motor roared back to life and they were again on their way. This is the reason Jeepspeed is such a class organization. The team didn't have a spare cable. Mike Barnett of T&J motorsports jumped into action and had a similar cable. Bob Green, Ted Parker and Mike rigged it to work with a wire connector and had it back together in 10-15 minutes. Brent Bailey fueled the car, Tandi and Machelle Green took care of the drivers and they were on their way. 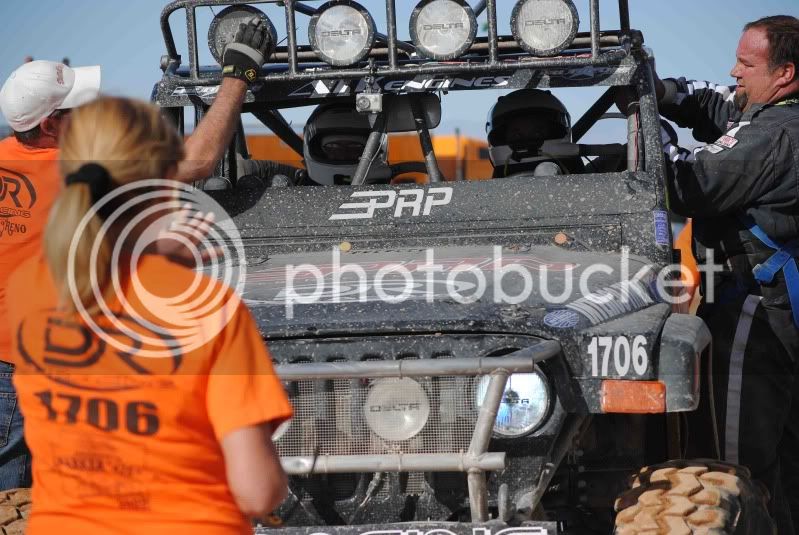 They cruised around the course at a conservative pace on the roughest course in the country. That lap went without incident, and they handed the car off to Tandi Hartman and Scott Parker in about 7th position of the 16 cars. Tandi and Scott went through the rock garden and started to see attrition take it's toll on the other cars in the class.

The car was getting loose again and at pit B, Fair Pits, with Clive Skilton watching, they installed a borrowed shock, from Mike Barnett of all people. While there, Tandi and Scott were asked if they could deliver some tools and parts to a truck stuck about 5 miles out. Scott said "If you can secure it to the spare we will take it". The shock was not valved anything close to what they needed and was too short, so the ride was really rough. Tandi and Scott had forgotten about the tools and parts until they saw them flying all over the place. At one point, a large tool came flying into the cab and just missed them both. What was left of the tools and parts were delivered and the racers were pleased to have them. At Pit C Tony and Robby didn't have another seal kit, so Scott Hartman, Dan and Brent drove down from main with a spare front shock, disassembled it and installed the shock seal cap with new seals into the rear shock. The shock was rebuilt and changed in less than 10 minutes.

Tandi and Scott kept the car together, helping other racers on the way and brought the car back to main in 3rd or 4th place with one lap to go. Brian Hartman and Marty Scott waited at pit 'A' for the car to clear and rushed back to main with the remaining spare shock. Robby and Tony waited at 'C' and Scott, Dan and Brent ran back to main, grabbed the shock and seal kit, then ran back down to pit 'D'. The team read that the time limit was extended to 18 hours, so Tandi drove accordingly, stopping in every pit to look at the rear shock and tires. At pit 'D' the decision to keep going and not change the seal again was crucial. The crew at Pit 'C' and 'D' are all within sight of each other, they waited for the PRP Wrangler to show up. There is no doubt when the 1706 crests a hill at night which car is coming with the Delta HID lights. There are no lights in the desert brighter. The Jeepspeed cup car of John Krelwitz passed Tandi on a hill just before the second pass through Pit 'D' and the whole crew commented on how bright 1706's Delta lights were. Tandi and Scott, near exhaustion, brought the car back through the finish line in 2nd place with under 6 minutes to spare. Thinking they had another hour, and leading the 3rd place jeep by over an hour they cruised to the finish just in time. 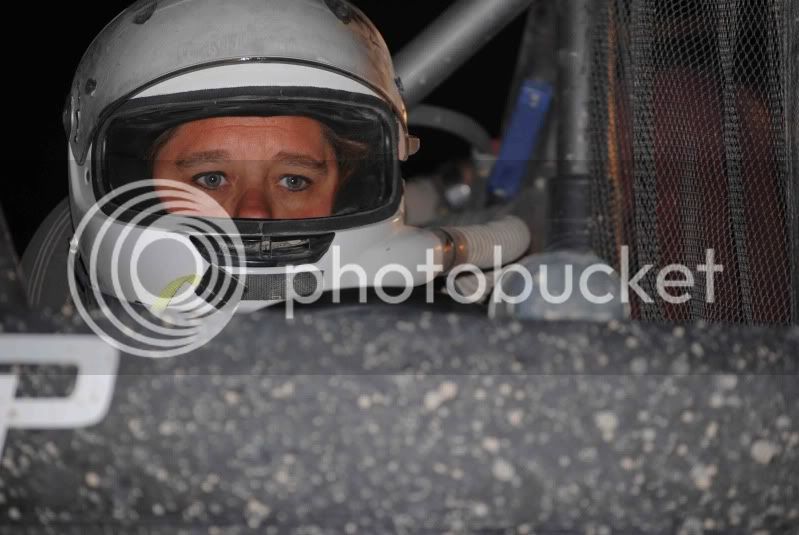 Our sponsors and our crew keep us in the game. Thank you for your support. 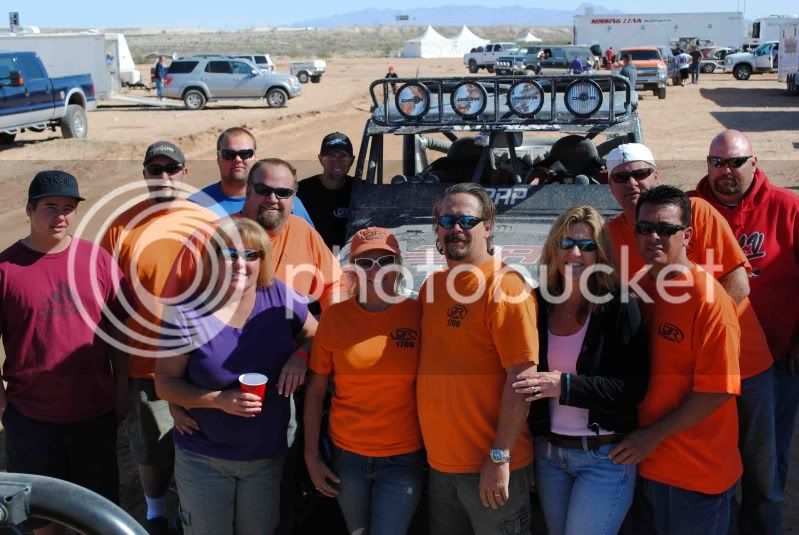 Great pitting across from you. I felt for you guys mounting up those 8 super swampers by hand and then never got a single flat! Go figure!
Good job finishing with minutes to spare. See you in the dez soon hopefully.

Congrats on the 2nd place... man i can't imagine doing 400miles in a jeep speed, my back hurts just thinking about it.
Rob Fiege

Wow...a great Jeep team and a great writeup. Congratulations on your race. You made my day.

Saw you come thru B and I knew you were down a shock...I was wincing for you as you went by.

Thanks guys! It was definitely a team effort.

Greg, I was great meeting you, and thanks for giving everyone rides in the scissor lift.

Woody, you think you were wincing....you should have been riding in our junk...haha. That shock banging was killing us. Got it fixed though, twice.