Shawn had a very low cost, truggy running at the MORE race. Simple yet innovative. LS truck motor, Powerglide, Ford 9". We talked for about an half hour and it was seemed that the overall cost for one of these rigs would be around $50-60k or less OTD.

He smoked the field on lap 1 and I believe had the fastest lap time of the race. Not sure what happened to him on lap 2. I think I am gonna visit his shop in June when I am in Kali.

I can vouch for it being freakin fast!! We saw him at MM7 lap 1 and 2, and he had to have been the fastest one through!!
www.bajahid.com

How many of those fast laps did he finish? It was nice to see another truggy out there again.
Is a prophy truck kinda like a trophy ranger?

I don't know what ended their day but they had a huge lead after lap 1... everyone in our pit said either they cut the course or that thing is going on its lid at some point. Sarcasim obviously, but none the less they were cooking!!!
Rob Fiege

Huntington Beach said:
I don't know what ended their day but they had a huge lead after lap 1... everyone in our pit said either they cut the course or that thing is going on its lid at some point. Sarcasim obviously, but none the less they were cooking!!!
Click to expand...

Ibeamford said:
How many of those fast laps did he finish? It was nice to see another truggy out there again.
Click to expand...

Almost as many as you

you were told correct.

What exactly failed on the upper arm?
Nikita Khrushchev said"We can't expect the American People to jump from Capitalism to Communism, but we can assist their elected leaders in giving them small doses of Socialism, until they awaken one day to find that they have Communism. "

sloride said:
you were told correct.
Click to expand...

sloride said:
Almost as many as you
Click to expand... 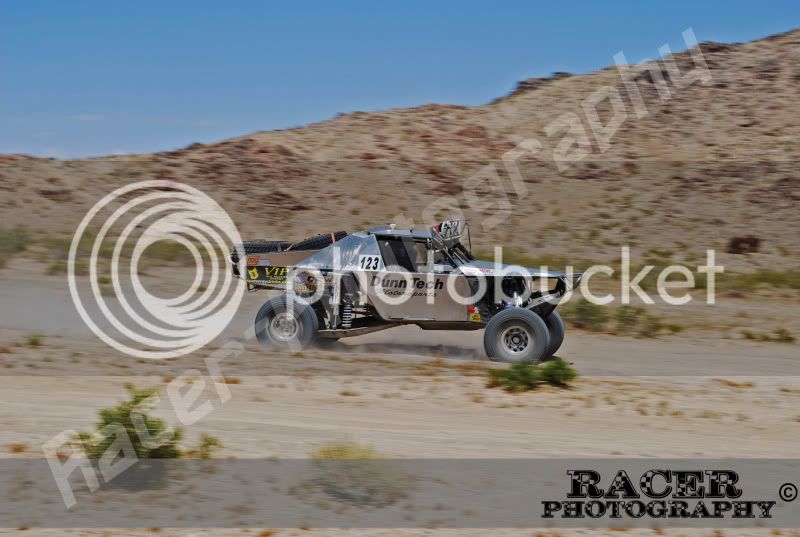 The right front was toed out and he had some salad on that side of the truggy. He spanked everyone on the first lap.

The right J arm broke just before the heim. He is building new upper J arms right now being he found why the weak link in the J arm.

Lloyd went for a ride Friday and could believe how fast the car was and when he came out of a turn and onto a straight away, it took off like a rocket ship.

Car weights 3800 lbs wet with 2 spares, 3 fuel cells, 2 - 22 gal cells keep a 3 gal cell full to supply the 500 hp motor with and yes, a powerglide. Sean keeps his mind cranking all the time and this car was about weight and ballance. This car will be something to keep an eye on the rest of this season.
LEATT-BRACE Class 1 #135 MORE/BITD
LEATT-BRACE Distributor
B

I don't want to discount the car, it's driver, or accuse anyone of anything. I will say right now that it was very fast, and to have a 2-3 minute physical lead after one lap would be a great statement for the car to say the least, that's a hell of a lap. But to have a 7 minute physical lead after one lap is insane and doesn't seem possible unless there was a pileup from second place on back. I don't know what the actual lead was, but according to my watch it was about a 7 minute gap from when they came through at the end of the first lap and when the second place car came through.
Mini's are for girls
H

That Dunn Tech truggy hauled the mailed. They schooled the rest of the open class. I'm sure they will fix the week link on it and come back for an overall.
Rose Racing 729
Trailglow Lighting, Bilstein Shocks, Deaver Springs, Pro Shift Transmissions.

did he say he could build it for 60K or would he sell it for 60K, hell for 50k put my name on the list, you would be seeing a lot of those things if that was the price and everyone who paid that much for the tl's and cl1's would be pissed.

Sean and I team together and the number is correct. That was a 3 month build and the bugs will be worked out very shortly.
LEATT-BRACE Class 1 #135 MORE/BITD
LEATT-BRACE Distributor

I love the drivetrain - fully commoditized where the parts are ordered online from GPP and Jegs!

Just think, you can have a competitive Class1 car for the price of two Class 1 Transaxles!!!

And then there is the convienence of Pump gas.
http://www.OutbackUSA.com