Eight in a row for Nissan in Toyota 1000 Desert Race!

Botswana, June 21 - Nissan celebrated its eighth successive victory in the Toyota 1000 Desert Race, round 4 of the South Africa off road championship in Botswana on Sunday when Duncan Vos and Ralph Pitchford took the chequered flag in their Super Production class Donaldson Nissan Navara. 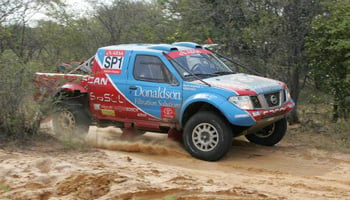 For Vos, the reigning national drivers' champion, it was his third successive triumph in the most gruelling round of the championship. Vos and Pitchford have now extended their lead in the drivers' and co-drivers' championship, over Donaldson Nissan teammates Ivar Tollefson / Quin Evans and Hannes Grobler / Juan Mohr, who occupy second and third places respectively.

Nissan have now won each of the first four rounds of this year's championship, with Vos victorious on three occasions and Grobler once.

Norwegian Tollefson and Britain Evans finished fifth while Grobler and Mohr, who won Friday's 70km prologue to earn the right to start Saturday's race from pole position, retired after 138 km while leading after hitting a rock and damaging the front suspension.

Vos and Pitchford recovered well from a poor prologue result which saw them start in 13th place on Saturday. A puncture and a problem fitting the spare wheel cost them 5 minutes. A strong performance on Saturday saw them complete the first half of the race in the lead. A trouble-free run on Sunday saw the championship leaders take their third win of the year.

Duncan Vos: "To win the Desert Race is always a big achievement, but to do it with Ralph alongside me is very pleasing. I have to thank my team for all their hard work and for preparing a great car. Apart from the puncture in the prologue we didn't have any problems at all."

The next round of the South Africa Off-Road Championship is the Sun City 400 on July 24 and 25.