A black police officer shoots and kills a black male.


"The subject refused multiple instructions by the first officer on scene to remove his concealed hand from his pocket," the statement read.

That officer drew his gun, according to the statement.

A second officer arrived on the scene with an electronic stun gun and the man paced while both officers attempted to talk to him.

El Cajon Police Chief Jeff Davis said at a news conference: "At one point the male rapidly drew an object from his front pants pocket, placed both hands together on it and extended it rapidly towards the officer taking what appeared to be a shooting stance, putting the object in the officer's face," El Cajon Police Chief Jeff Davis told reporters.

"At this time, one of the officers discharged his Taser in an effort to subdue the subject," Davis said. "Simultaneously, the officer who had the object pointed at him discharged his firearm, striking the male."

According to the police statement, the second officer fired several times.

The penalties need to be more harsh in the stories we are experiencing more and more. Loss of any welfare assistance, jail time for just being part of the mob. Violent protestors get 10 years, no parole, Assault a police officer, 25 years no parole , vandalize, 20 years no parole.

I am sick and tired of watching this every other week. enough is enough.
Zambo to Mawtrophykart, go shove an umbrella up your ass and open it.

Pretty clear cut if you ask me... suicide by cop shooting 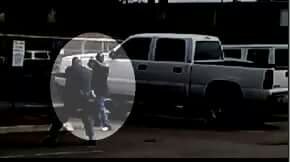 Yep. But look what is going on in east county as we speak.
Zambo to Mawtrophykart, go shove an umbrella up your ass and open it. Zambo to Mawtrophykart, go shove an umbrella up your ass and open it.

Since it was reported that he was running in and out of traffic, wanting to get hit or something of that nature. (suicidal) Would not surprise me that suicide by cop became a more worthy option than possibly just getting injured and not dying by auto pedestrian accident.
Brad Lundy.. EMT/Dispatcher AMR Las Vegas, Rescue 3 Motorsports Safety Solutions.

The shenanigans was happening just a couple miles from my shop. Helo's, sirens and speeding cops and sheriffs cars were all around. The Border Patrol is right across the street and they were a beehive of activity. It's been fairly quiet today, but wait til the professional protesters are flown in... Planned "Protests" for Saturday
Last edited: Sep 30, 2016
It won't fail because of me!

Lock and load Mark.
Zambo to Mawtrophykart, go shove an umbrella up your ass and open it.

Just as an aside, cops wear the badge and vest by choice. They are paid to be on the front line.
What if fireman responded in kind? I'm sorry your home, office, whatever burned down- it just looked to dangerous to deal with?

LAPD fatal shooting in south central this afternoon, focus will shift, and all the dark imports will be bused north to start problems in LA. Stay tuned. The ghetto will be on fire tonight.
Zambo to Mawtrophykart, go shove an umbrella up your ass and open it.
Share:
Facebook Twitter Reddit Pinterest Tumblr WhatsApp Email Share Link
Top