With so much hype (real or not) about this year’s El Nino, I ‘ve really been wondering how weather would affect this year’s race. I did a little homework and thought I’d put together something for us all.

Cut me some slack guys, I have no expertise on this subject but I think many of you will find this interesting. I’ve cobbled together this from Wiki and some surf forecasting experts …

What is an El Nino?

El Niño is defined by prolonged warming in the Pacific Ocean sea surface temperatures when compared with the average value. In Spanish, the capitalized term "El Niño" refers to the Child Jesus, so named because the pool of warm water in the Pacific near South America is often at its warmest around Christmas.

Who and where does it affect?

While we surfers here in California typically think of El Nino events in terms of how many good swells we will get(larger and more frequent), an El Nino is in fact a global event. With an increase in news coverage and the internet, we see what appears to be way more coverage here in SoCal than we did during our 1997 and 2005 El Ninos. We see the fisheries all over the Pacific affected, and odd weather like increased temperatures in places like Alaska and other spots. 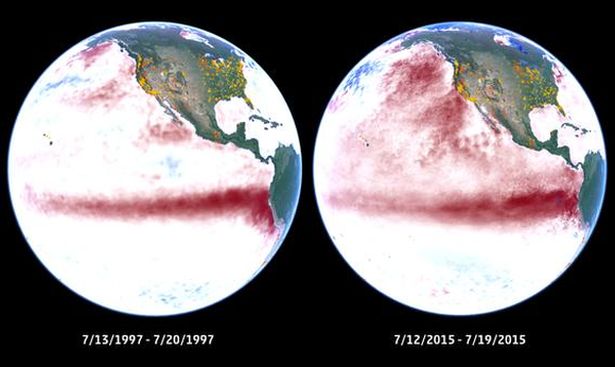 In the above image warmer water temps are represented in red… this image compares a real solid El Nino event we got in 1997 to this years Ocean Surface Temps.

It is a certainty that this El Nino will affect the Dakar and the weather patterns in South America, the question for me is to what extent.

According to Wiki,
Because El Niño's warm pool feeds thunderstorms above, it creates increased rainfall across the east-central and eastern Pacific Ocean, including several portions of the South American west coast. The effects of El Niño in South America are direct and stronger than in North America. An El Niño is associated with warm and very wet weather months in April–October along the coasts of northern Peru and Ecuador, causing major flooding whenever the event is strong or extreme.[20] The effects during the months of February, March, and April may become critical.

Southern Brazil and northern Argentina also experience wetter than normal conditions, but mainly during the spring and early summer. Central Chile receives a mild winter with large rainfall, and the Peruvian-Bolivian Altiplano is sometimes exposed to unusual winter snowfall events. Drier and hotter weather occurs in parts of the Amazon River Basin, Colombia, and Central America. 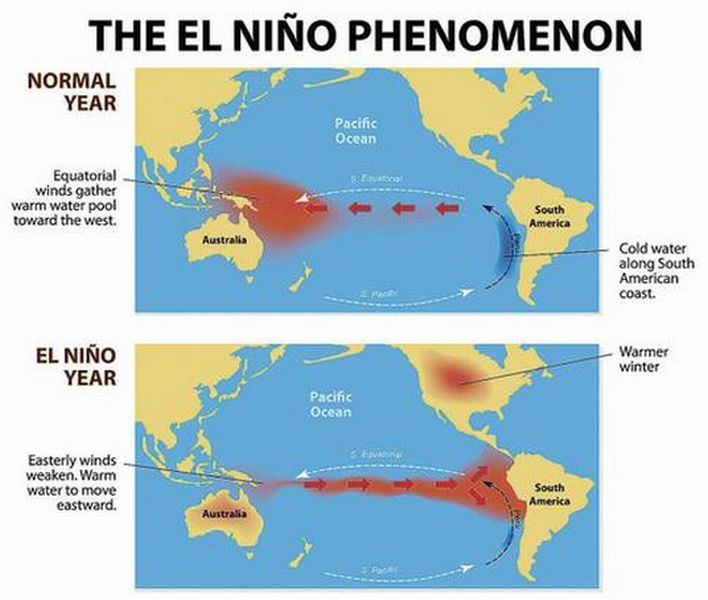 What does it mean for Dakar?

Very possibly more rain, and what rain does come has the potential to be thumping, causing some degree of flooding and flash flooding. This may result in closing or postponing stages as we saw in Stage 1.

I speculate that Chile and Peru pulled out of Dakar this year in large part due to weather concerns of El Nino, so the "flavor" of the race will be different than in years past.

The 2wd vs. 4wd approach will be interesting to see play out. Will 4wd and smaller tires be superior in mud and water crossings? Or will the Baja style 2wd monsters have better clearance and a greater ability to hydroplane over water crossings and charge through muddy sections?

Will the bikes and handlebars even be able to race some of these stages or will the ASO have to make major changes to their stages?

Will we see snow on stages?

These guys have been arguing about El Nino since at least April. Some of the posters are professional surf forecasters and have College degrees as well as decades of experience obsessing about good surf...

Somewhat of information overload but a great resource nonetheless...
Ben

10 day forecast for Cordoba, Argentina... It looks like they are gonna take a beating...

I wonder if in El Nino years it would be better to run an ASO event out of Winhoek, Namibia (check out the Ford, Toyota Namibia testing videos) with a loop through Botswana (Makadikadi) and into South Africa to finish at Cape Town.


or ASO event in the middle of the Australian summer through West Australia.out of Perth.
Last edited: Jan 3, 2016

Bull-dust said:
I wonder if in El Nino years it would be better to run an ASO event out of Winhoek, Namibia (check out the Ford, Toyota Namibia testing videos) with a loop through Botswana (Makadikadi) and into South Africa to finish at Cape Town.


or ASO event in the middle of the Australian summer through West Australia.out of Perth.
Click to expand...

Man, the weather in Perth looks beautiful right now. I don't know what's a better wet dream, heading down to South America and watching the race out of Peru after surfing their endless left hand pointbreaks, or going down under, visiting family and surfing the Margaret River area south of Perth... Australia has so much potential for an event like this it's incredible... Perth to Ayers and back... or Perth to Sydney or Perth to Brisbane, or Perth to Melbourne...

Namibia is supposed to one of the most squared away countries in Africa, with long term agreements with foreign corps. providing jobs, stability and opportunity for the locals. Basing out of South Africa would be so cool...

I suspect when Dakar left Africa that was it. They seem firmly bedded down with South America and Argentina and the logistics of Africa may be too much...

How rad would that be if they did your South African loop once every 5 years, went down under once every five years, and spent 3 out of 5 years honoring their commitments to South America? The Dakar World Circuit would be so much better...
Ben

I do believe Namib has some EPIC dunes too as I've seen coverage of the Nissan team from SA doing their testing in the Namib dunes....

Wondering about a south to north Dakar...start in SA through Namib and on up to Dakar...have to look at what other countries are in that path

I suspect its all about money, I bet Argentina pays ASO a lot more than African countries ever could, thats another reason why Peru pulled out. I was watching Fox Sports Latina America and thats what they said, and its true, Argentina is wealthier than Peru. Since everything is about money, I think ASO is happy with Argentina $$$.

Sounds like the ASO isn't much different than the NFL. That's too bad...
Ben