Bummed that Russell won't be driving the Merc this weekend. Lots of 'good-byes' including Perez from RP, Kviat from AT, Vettel from Ferrari, Hopefully Albon from RB, Grosjean and KMag from HAAS, Ricciardo from Renault and Sainz from McLaren.

BTW...check out his funny puppet video that McLaren put out...

I really can’t stand MV. But, what a nice change. Hamilton has been complaining that his car is changed after having George driven it.

And mclaren is about to be sold... 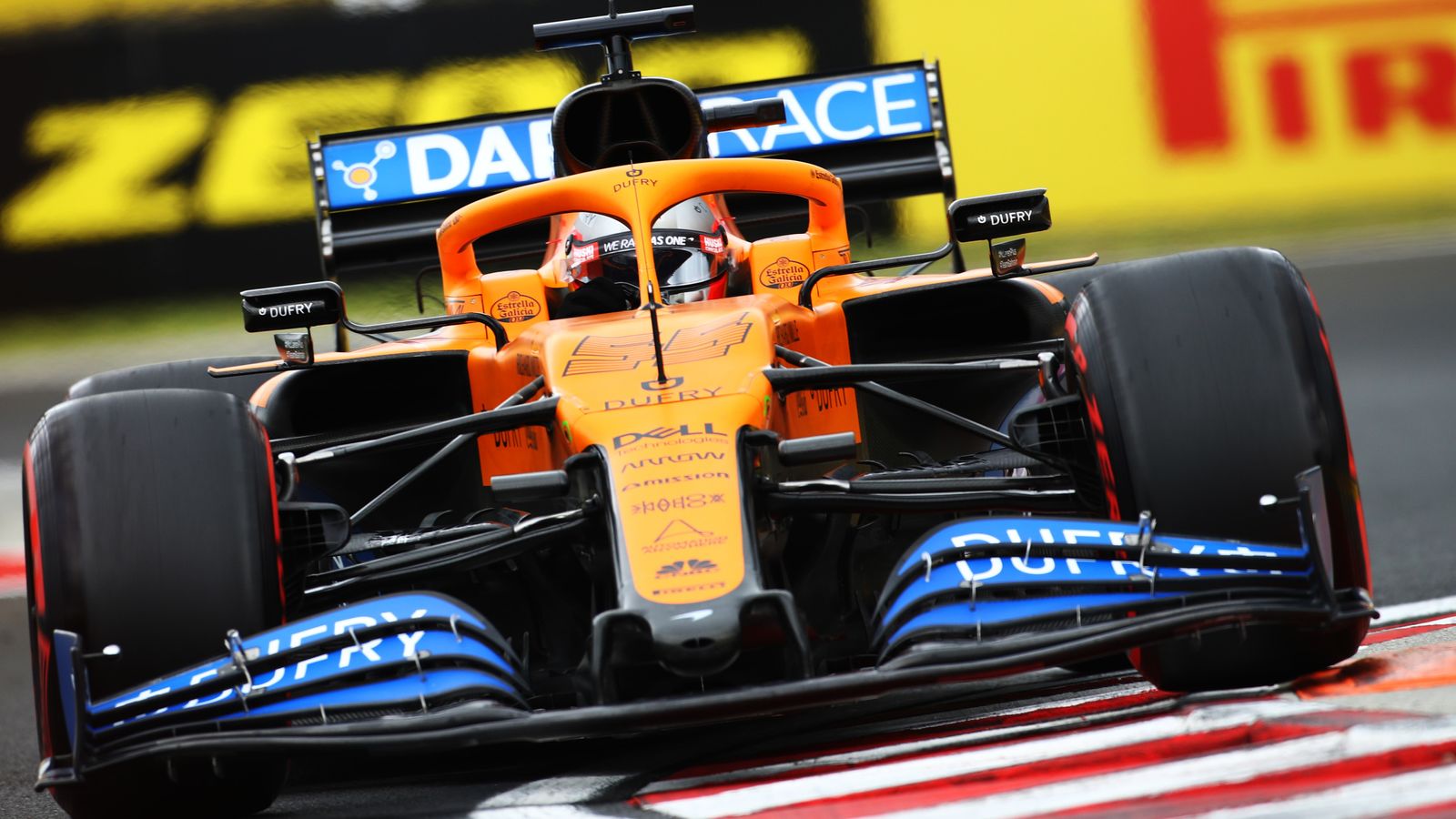 A consortium of US-based investors has bought a 'significant minority' stake in the McLaren Formula 1 team.

the end of the 1976-2019 F1 series is over. With in 3 years it will be identical to current Indy racing league but only one oval a year and going from country to country. It will probably be like this year. Back to back races at the same track, possible different configurations each race.

williams gone, mclaren gone, Renault gone, will merc be gone after 2021? Ferrari is teetering. Rb is trying to sell right now too.
https://www.instagram.com/redbeardfifty/ 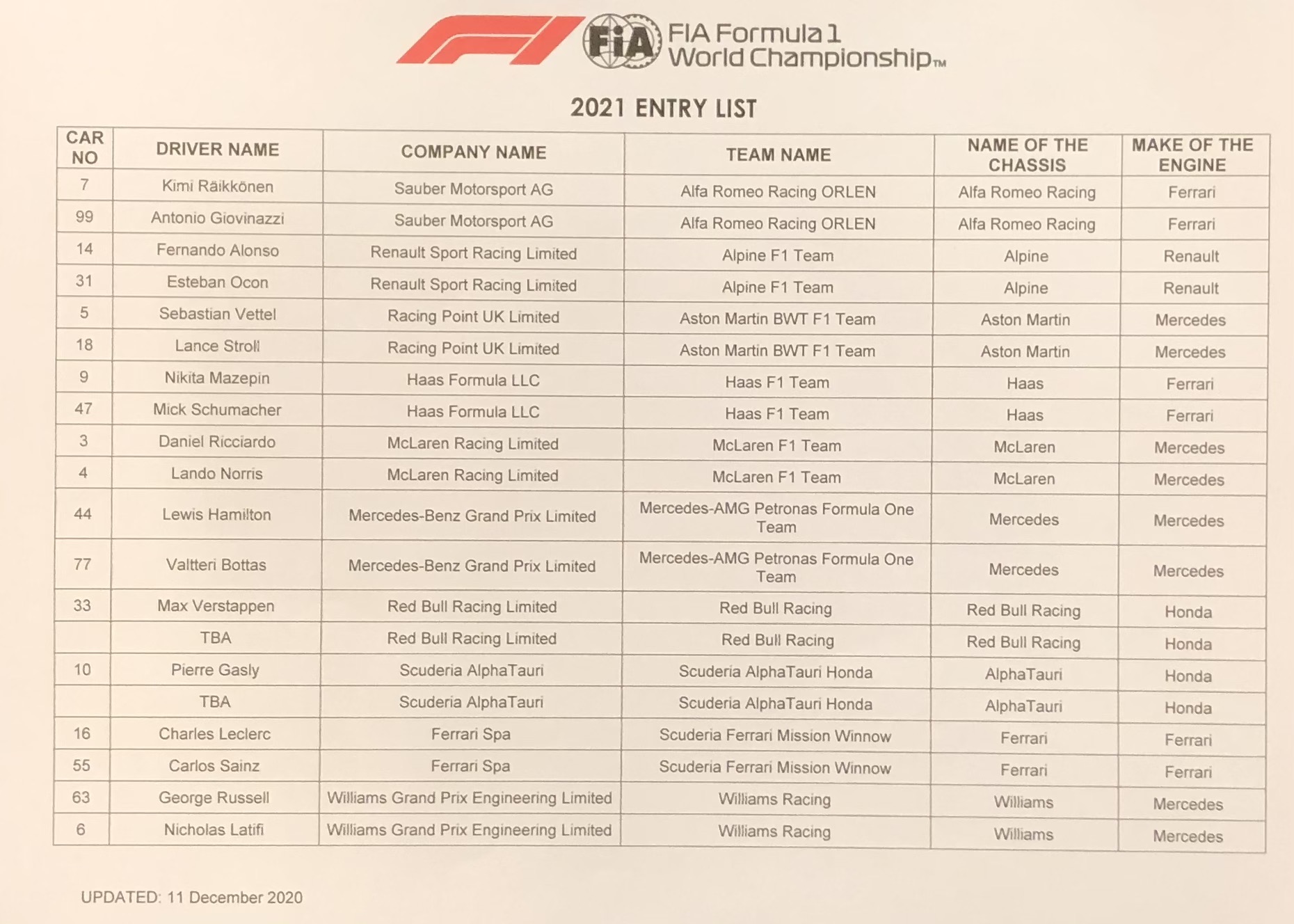 The FIA has published the official entry list for the 2021 Formula 1 World Championship, with a few points of note. The entry lists 18 of the 20 drivers with the only gaps being the second Red Bull…

if you don’t like nascar then you are going to hate F1.

LM admits that nascar and IRL are their target models with it becoming a drivers championship only and advertisement package for close racing billboards.

sooooo fake yellow flags, more tilke like tracks, teams/cars/engines that can be bought and sold to different manufacturers so they can come in slap a logo and then pull logo, sell and new company can rinse repeat.
Fia is seeing a dead horse come 2030
https://www.instagram.com/redbeardfifty/

I am not new to F1. I have seen every F1 race since 1984 (TV) and have been to the USGP twice, the Canadian GP and the Italian GP in person. I am also a pit marshal for Indycar. There is no way LM will turn F1 into Nascar (IRL no longer exists). F1 knows their history and knows what is currently holding the sport back. Thus the 2022 rules package and the cost caps. They are working diligently to fix what needs to be improved and keep all of the mystique, lore, action and history. I have faith in the new F1 boss Stefano Domenacali and also Ross Braun. 2021 was a season that had lots of action although not so much at the front. The rules change will hopefully help that.

On a happier note...I certainly hope Sky's Ted Kravitz is right and Perez is only days away from being confirmed at Red Bull and Albon becomes a reserve/test driver. Perez won't consistently out qualify Max but he likely will be his match in the race...IMO. My 2 pesos.

but yea, it’s on its way to crap. The funds the money the corporate projects; all have their eye on the nascar and Indy series as guides.

f1 is at a weird crux in time. Since you have watched F1 for around the same length of time I have. You too know that the last 5 years has been unprecedented in singular podium sitters.
the 2020 record of the same three on the podium outdid the roaberg hami vettel record.
The Schumacher Ferrari days even had a better mix of podiums.

every time they try to clamp down costs (the pre hybrid power units were $800k on the top teams. Now rb portion of the pu costs is $200m a year... minimum...

williams got their pu free....
Why do you think haas is signing Ferrari junior drivers.

2026: the goal is singular chassis design, equal aero package choice... identical engines with different brand sponsor name...
people won’t watch the circus. The last two formula changes (in the hybrid era) killed spectator and viewership. For the first time in F1 history European viewership and attendance was down and USA was up.

Max Mosley spoke about it a bunch and he said it’s why Fia and F1 looked the other way with Verstappen so much. He filled European race seats with orange wearing spenders.

can’t charge a venue $100m-150m for an event if you can only sell 20% of tickets at full price.
https://www.instagram.com/redbeardfifty/

Aaaaaand it’s now officially released. Mercedes just started its sale of the team. 1/3 sold to Ineos. 1/3 own but toto... 1/3 still held by Daimler.

daimler will sell the final third during next season.

I wonder if RB will leave next season if they win the WDC/WCC.... leave on a high note?
https://www.instagram.com/redbeardfifty/

Don't really want to say this is the beginning of the end for F1, rather not be the pessimist, and have to recognize that things are always changing for various reasons. We all thought F1 was dead a number of times over the years for changes implemented....V12, V10, V8, left to the annals of history (man I miss the beautiful note of those screaming at the rev limiter) for the latest V6 hybrid package. Now in reality, the car of today is so much faster than those earlier drivetrain packages, but still not a big fan of the change. This new trend we're seeing could very well be the end, for me personally anyhow. I lost interest in indy quite a while ago, with all the cookie cutter cars, no innovation left for the team or manufacturer to develop a car. Someone previously mentioned Nas-turd, don't even get me started on that. The series was pushed off a cliff long ago as far as I'm concerned. And the new rules with multiple stage winners for each race, throwing a yellow every time a driver farts in his suit, etc.... tossed a torch onto the pile of cars at the bottom of said cliff.

Been a huge F1 fan for years, love the innovation and utterly seemingly impossible performance capabilities of the F1 car. I just hope this isn't the beginning of the end.

Guess Checo has scared him right into the 'bottle.' Lol

As mentioned previously, not and never have been much of a Lewis fan, especially after he was hanging out with Justin Bieber a few years ago, here's a funny video about his hypocrisy.