Bricoop said:
Not sure this track is where it’s at for these cars. Looks like a fun track, but passing was almost non-existent. Bit boring for a wet race.

Doesn’t seem like that Schumacher talent is genetic. KMag seems to be getting the most out of the car.

Sainz has the worst luck. Danny looks awful finishing dead last of the runners with his teammate on the podium, maybe he had damage from the wreck.

Albon continuing to be a moving roadblock. Max was commenting on his DRS train from the drivers room after the race.

Latifi didn’t destroy a car, good weekend for him. Both the Aston’s even earning points, only RBR can say the same thing.

Rain, the ultimate equalizer. 8 constructors in the top 9 finishers.
Click to expand...

Interesting to see when DRS was eventually turned back on, it didn't seem to make a difference for a few of the cars.

The look on Toto's face as Hamilton was being lapped by Max (only 40 laps in!) was priceless!!! His interviews in drive to survive, he comes off as a very smug A-hole. Makes me happy to see merc struggle, would only have been better if Bottas had been able to get by George.

Wet race, and wet offline in key passing areas for a lot longer, and so I’m not sure longer-term conclusions can be drawn.

…but I’ve never been a fan of Imola. Not totally fair to resent it for 1994 in ways beyond, say, Spa, but the (understandable) neutering of Tamburello combines with the rest of the design to produce a track that just reads kind of boring to me. A series of short straights connected by chicanes and 90-degree corners; sounds like a city circuit without the city.

Mostly worried about what seems to be a lack of development by Haas. Holy Cow RB dominated the weekend!
Good Grief

Sounds like a series of updates are being made by numerous teams. RBR last week, Ferrari this week. Mercedes sounds like they want to go in a completely different direction with their car and will be using Miami as a test of sorts. RBR was reportedly able to shave 4kgs from its car last race with its upgrades. It'll be interesting to see how impactful Ferrari's changes are.

Williams asked if they could leave the car unpainted to save some weight. F1 said no. If that's the best this dumpster fire of a team can come up with, I feel awfully sorry for them.

Porsche entering the series via red bull engines.
Audi looking to buy a team (McLaren said no). I think we'll see Stroll flip his team to them. The offering price of 600M is about 4x what they bought the team for in 2021.
Oh and Andretti said they want in on the action too.

Miami looking like it will make for an interesting race, going to be a few red flags for sure with that chicane. Just watching Brundle on the grid walk, effing celebrities, some of them are so rude and full of themselves, just go away.

That section under the bridge is pretty sweet though. Cool to see the cars get so upset

Pretty uneventful until the safety car, but good race. Track looks like it's fun to drive from a driver's standpoint, long straight, some really tight corners and couple turns with 2 or 3 apex's.

Perez probably would have gotten Saenz, maybe even Charles on those newer tires if he hadn't lost power

Bummer for Bottas, he had both mercs beat
Advertising supports this site

I guess the drivers weren’t fans of the chicane, but it *is* technically a street circuit and that’s the one section that really looks like it.

Not a bad race thanks to the safety car. Verstappen and Lerclerc have some good fights this year. More to come, hopefully.

Haas. Nuts. Sheesh. Bummed for Bottas to not beat the mercs
Good Grief

Agreed, I think there will be some great battles between Max and Charles this season. Anyone else notice the RB porpoising? This is the first race of the season I have noticed them having the issue. The Ferrari's seemed to have settled a little from the prior races.

Regardless of outcome or who I like to see do well the racing has been fantastic! The new formula is awesome, much better than I expected.
Good Grief

Miami showed how good of a job they did on the car redesign. We haven't seen that level of following in a long time.

I think they'll get rid of turns 11-16, or at least modify them. Drivers seemed displeased. Overall seemed like a hard race for the drivers, very physical and hot. Sainz's bottle wasn't working during the race.

That redbull sure is slippery. And that Mclaren is not. But I do expect to see Mclaren thrive over the next few high down-force tracks. A podium wouldn't surprise me in the slightest.

Ferrari claims red bull has spent more aggressively in their upgrades this year. Who know if it's true. If it is, we should continue to see the battle tighten up between the 2 teams. Could turn into a battle over reliability, which doesn't favor the redbull based on their first few races.

Aston with too cold fuel (haha). I assume the chilling creates colder combustion and power gains (cold fuel takes up less volume, but unlikely a concern given the limit is based on fuel weight not volume).

Weird that Merc asked Ham what to do. I guess that's what you get when you're constantly questioning the team's decisions?

I don't understand the VSC to SC decision. Seems to have given certain drivers an advantage. Seems that instantly going to SC would have been the most fair approach.

Albon continuing to show he deserves a seat. Williams-Audi has a nice ring to it.

Overall great GP, I hope they go to a softer compound next year to open up the strategy.

Bricoop said:
Miami showed how good of a job they did on the car redesign. We haven't seen that level of following in a long time.

I think they'll get rid of turns 11-16, or at least modify them. Drivers seemed displeased. Overall seemed like a hard race for the drivers, very physical and hot. Sainz's bottle wasn't working during the race.
Click to expand...

They followed like that in Jeddah, too, of all places. The return of ground effects certainly seems to have worked.

Miami management has apparently expressed willingness to modify the circuit, but the chicane is tricky because, while the initial publicity sold it as just a challenging feature of the track, the reason it's there is to slow the cars down to acceptable levels to pass under the bridge safely. So there's not a lot they can do. Perhaps they reprofile the beach section to carry more speed into the slow segment, but the chicane itself is the part the drivers complained about and it's not clear that there are great alternatives.

Ironically, when staying close was tougher in previous years, that chicane actually could have been a real boon to on-track action, since the slow speeds emphasize mechanical grip rather than aerodynamic, and it would be easier for trailing cars to stay close.

What's notable to me is the immense amount of money they are pouring into the facility. It's actually pretty cool how much the space gets used for, but the costs to re-build everything every year are pretty big.

And Liberty is pouring hundreds of millions into Vegas. $250 mil just to buy the land that the pit complex will occupy. F1 is certainly growing in popularity right now, so it seems promising... but economic downturns have wounded promising trends in racing before.
Advertising supports this site

Why do they need to slow down for the bridge?

I love chicane's on the courses, they reward those willing to charge in, late brake and make the pass, but when it's as narrow as this was, no chance of that happening, collision was guaranteed if you did.

I wonder what was said when he got back to the pits. 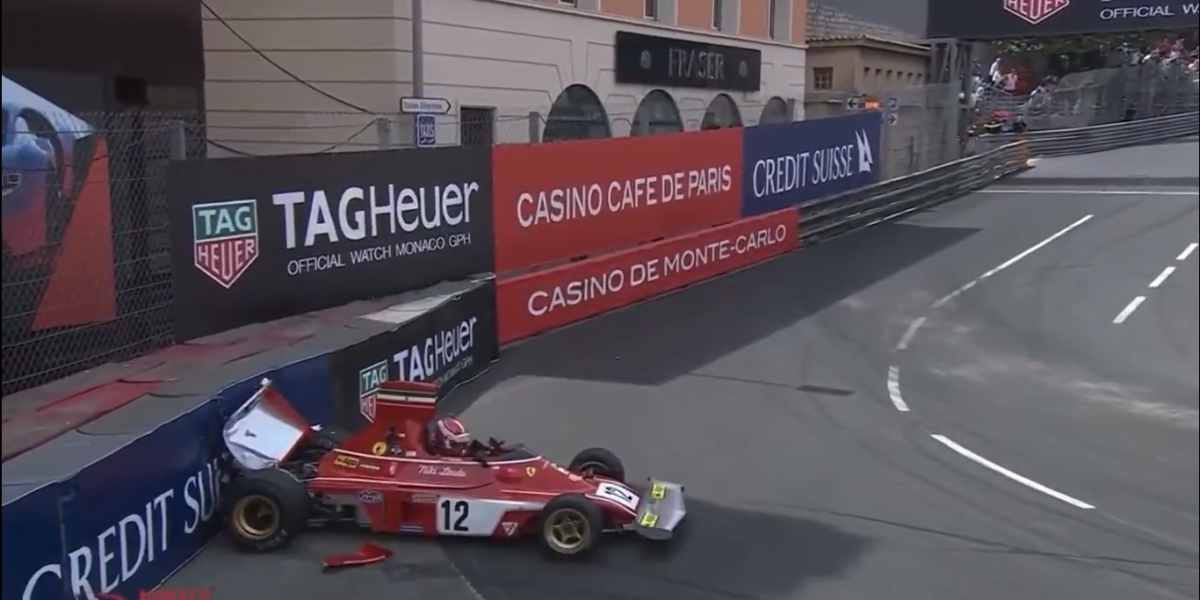 And it's still not his most disappointing crash in a Ferrari at Monaco.

currently.att.yahoo.com
Caution! Tony T. said I could be dangerous.
One man's fun is another's hell.

As for Redbull reliability they focused on speed. Apparently the spending cap doesn’t apply to reliability issues so they decided to spend on performance and worry about reliability later. At least that’s what I saw on a video. I think it was “The Race” guy on YouTube.

I think it was Binotto that stated in a video that they are purposely spending their upgrade money slowly while RB seems to be all in with their spending right now.
Good Grief

I wonder what was said when he got back to the pits.

And it's still not his most disappointing crash in a Ferrari at Monaco.

Crazy! It’s so cool to see how much smaller the cars were. They really were just big very fast go karts, I love that!
Good Grief

Nikki Lauda was the reason I fell in love with F1 and Ferrari. We got to stop at Ferrari on a trip to Italy 3 years ago.