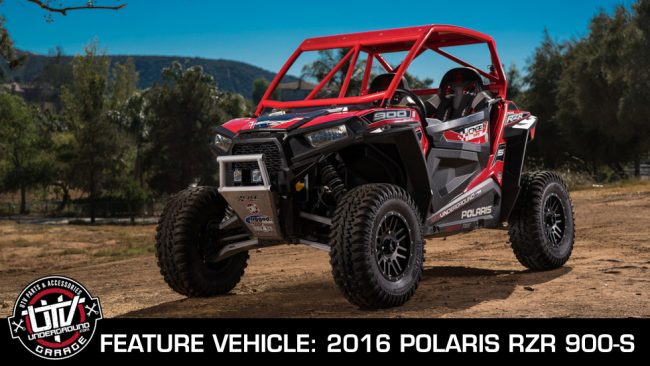 No matter what the vehicle is, if we set out to build one we always do things the right way. Our 2016 Polaris RZR 900-s build was no exception, and while the concept was simple, we added products that certainly improved the quality of the vehicle.

The RZR 900-s was introduced by Polaris to be a price point vehicle that gave the owner a still narrowed wheel base but allowed for enough suspension and power to really be used in any environment. While the vehicle isn’t the most popular machine for southwest desert riding, we still took an approach to make it a perfect capable desert vehicle to have some fun in. 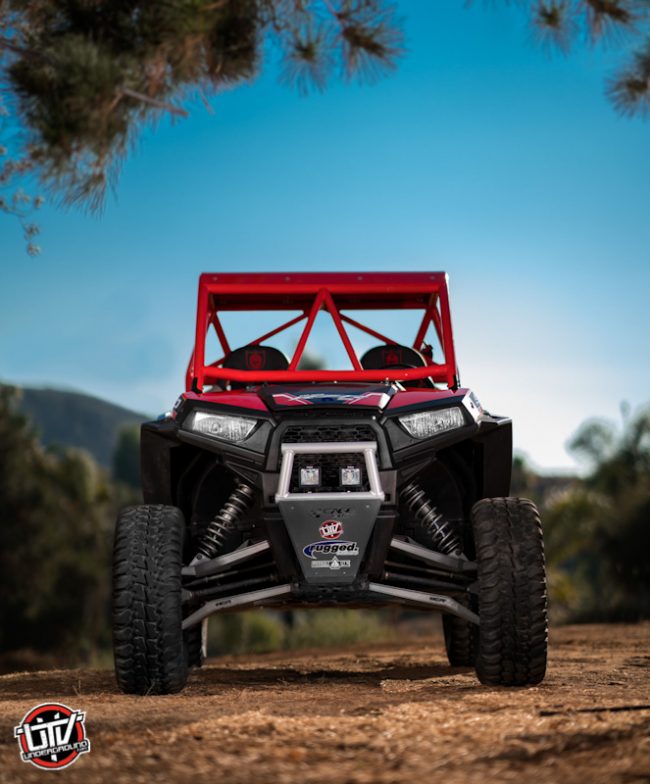 We built this machine in 2016 and have put just over 1000 miles on it. Its snappy power-plant and nimble handling has made it a go-to machine for us when needing to squeeze an additional machine on the trailer. Its also a machine we have put a lot of friends in to drive and ride and all of them come back smiling for ear to ear because of just how fun it is to drive.

To build the machine up we did a few things that gave made it look better and work better. We also did a few creature comfort mods that added to the machines esthetics while also enhancing either the performance or ergonomics. 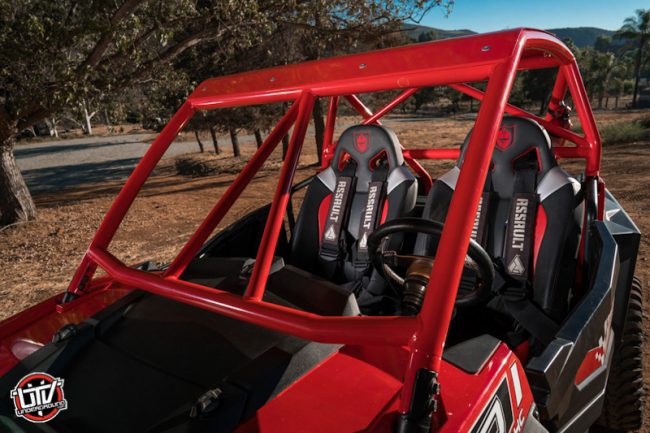 Like most of our builds the first thing we did was select a new roll cage. There aren’t a lot of companies making cages that fit the 900-s but one of our favorite cage builders just happened to have a cage for us. We started originally with a CageWRX Race Cage and we loved it. But then CageWRX called us up a few months later and said they had a new design and thought we would love it so we brought the machine back to them for an update. CageWRX laced our machine up with a brand new Super Shorty. The Super Shorty cage came fully assembled and retails for around $1800.00. The laid back design gives it a fast look and the additional two bed mounts give it some added strength as well. The cage came with the aluminum roof.

We complimented the cage with a CageWRX front bumper which we mounted two PIAA led lights to. The CageWRX bumper is one we have ran on multiple cars now and it always gets positive compliments. The bumper takes a little effort to install but its well worth the time. 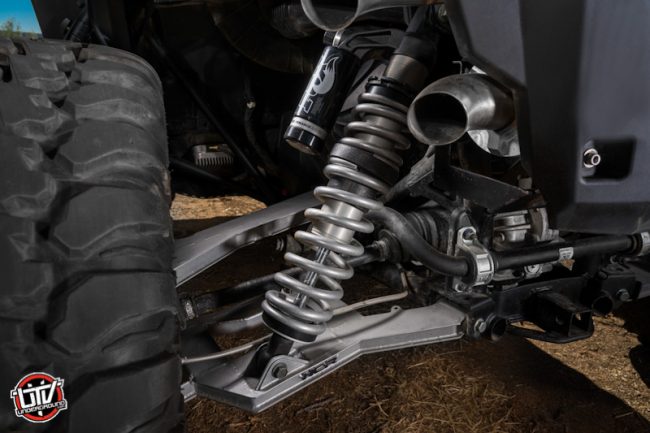 The 900-s comes with a decent suspension from the factory and features 2.0 FOX Podium coil over shocks. The 60″ wide, dual a-arm suspension works pretty good out of the box, but we were concerned with the durability of the factory arms knowing we planned to push this machine slightly harder then it was probably designed for. We had plans for Moab and the southwest deserts so we began our search for a replacement kit that would increase the strength of our suspension. We made one call to HCR Racing and were pleased to find out that they made a stock replacement kit that would utilize the factory FOX shocks and axles. They fired the kit off to us fully welded and powder coated and we installed the kit with ease! Despite the fact that I let a donkey drive this machine in the dunes and he managed to smash the front passenger corner into a witches eye, the arms held up. We did have to replace and axle but it could have been way worse had we still been running stock arms.

In addition to the beefed up arms, we added a Racer-Tech dual rate spring conversion kit to our FOX Podium Shocks. This spring kit was a total night and day difference and even if upgrading the arms isn’t in your wheel house, I would highly recommend adding these springs as it will greatly improve the overall ride and stance of the vehicle. 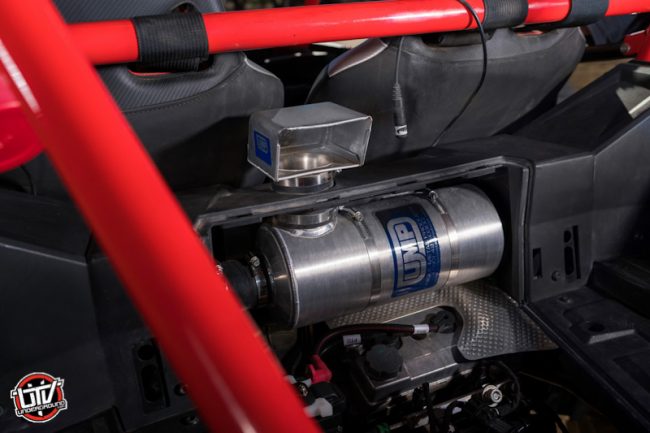 With cage and suspension dialed in we moved onto performance. We added a Benchmark Performance ECU, Trinity dual exhaust system, and a UMP intake. These mods not only woke our 875cc 4-stroke DOHX Pro-Star engine up, it made it a whole new machine when accelerating. The UMP intake system also gave us piece of mind that even in the dusty riding conditions we would experience, we wouldn’t have to worry about dirt and dust making it past the filter. The Trinity exhaust system is a work of art but it unfortunately covered up by the factory plastics. The distinct rumble it makes upon firing always leaves people asking what we have done to the motor. We have been totally stoked with the performance of this machine, we love how quick and snappy it is.

From there we moved onto the interior. The 900-S is a bit tight for two larger adults, that is one downside to the machine. We focused on making the machine more comfortable while adding safety items such as seats and harnesses. After running with stock seats for a period of time we decided we wanted to upgrade them. We turned to our friends at Pro-Armor and hooked up on a set of their G2 Polaris RZR seats. They customized the colors to match our vehicle and they came out great. We used a set of Assault Industries 4-Point harnesses to keep us held in tight. As the seats have broken in they have become a lot more comfortable and they have really held up to all of the nasty conditions we have put them through. 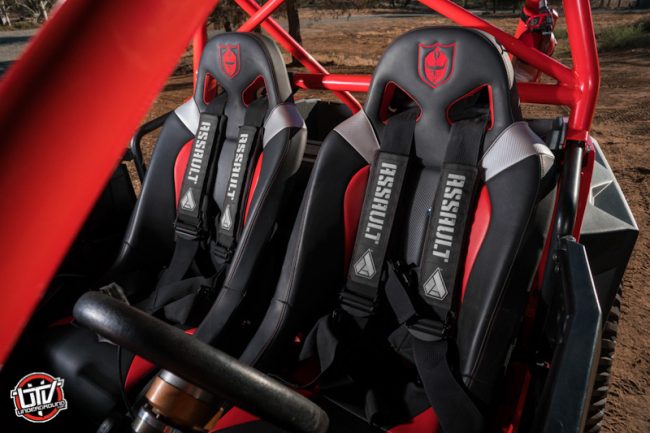 Assault Industries not only supplied the harnesses, they also sent us one of their awesome billet fire extinguisher set ups. They included an Assault steering wheel with their billet quick disconnect. While the wheel has certainly held up to the pounding we have given it, the black anodize has faded a bit. While it doesn’t bother us, it may bother you so keep in mind, the more you can keep it out of the sun the better. The disconnect for the steering wheel is a work of art and works amazing. The one downside to it is it brings the wheel much closer to you because of its size. This shouldn’t be a concern in a larger vehicle but in a 900-s where the cab is already tight, this did make the cab feel a bit smaller. With that said, it does put the wheel into a better position for the long fast rides as it is now in more of a racing position. Just keep this in mind when purchasing. Overall, we are very pleased and always have been with the Assault products we have ran.

The only other interior mod we made was a Rugged Radios RRP-360 2-place intercom. We tied the intercom to a Rugged Radios handheld RH-5R race radio. This is a solid radio and intercom system for those on a budget. The intercom allows for you to talk helmet to helmet between co-rider and driver and also allows you to plug in your phone or ipod for music. While the RH-5R race radio is great for close radio transmissions, we do not recommend it for longer distance coms. The radio is only 5 watts vs. the 50 watt race radios more commonly used in off-road vehicles. While we were able to hear all of our buddies on the trail, calling out to them was a challenge and rarely worked unless we were very close by. But again, this is a budget set up and can get the job done, we are just spoiled. 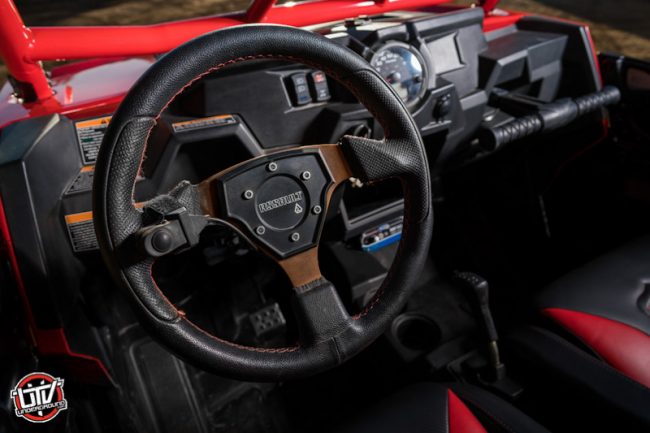 The last mods made on our 900-S were the wheels and tires. We went with a set of 14″ Method Race Wheels 403’s and we love them!! These are some of the best looking designed wheels on the market in our opinion. While we almost always opt for beadlocks, we went with standard wheels on this build and they have served us perfectly. We wrapped the wheels in a set of 28″ tall Tensor Tire Regulators. The tires are a little heavy but they are not only durable in design, they look badass! The wheels and tires have been perfect for everything from rock crawling to desert riding. They improved the look of our machine and have certainly improved the overall quality of the vehicle.

This has been a really fun machine for us. We have put it to work and it has never let us down! Even after being crashed in the dunes and then rolled over on another trip, the 900-s has taken everything we have thrown at it. We have ran it in the dunes of Glamis, the rocks of Moab, the desert of Ocotillo Wells, it has done hundreds of miles in Baja and even was driven on a long trail ride to the Grand Canyon. We couldn’t be more thrilled with this build and if you are building your own 900-s, we hope you consider making the same mods as us! 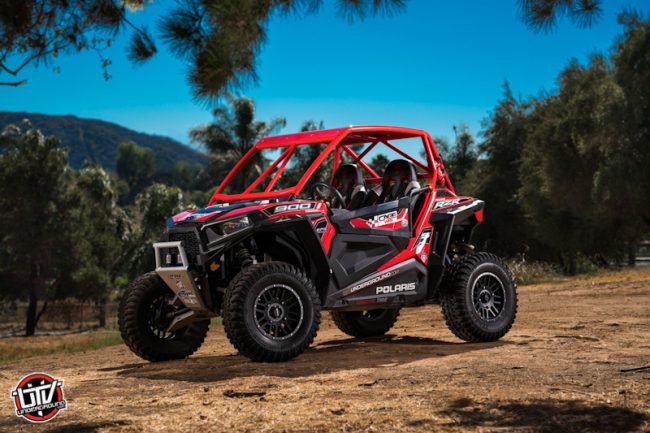 ment to ask does the UMP air cleaner void warranty? was thinking about 1 for my car
45th year racing Vws and still love it!!

harleys dad said:
ment to ask does the UMP air cleaner void warranty? was thinking about 1 for my car
Click to expand...

reason I ask a friend changed to a uni filter and Polaris put the breaks on any repair on the engine. Cost him 6-8 grand! I just thought the same would happen with the UMP. I tell ya Joey I put the Sand B particle seperator on my car and zero and I do mean zero dust gets into the filter housing. I can rub my finger on the inside of the air cleaner housing and there is zero dust there. Pretty amazing, might try 1 on my 1600 cars!
45th year racing Vws and still love it!!
Share:
Facebook Twitter Reddit Pinterest Tumblr WhatsApp Email Share Link
Top