I am starting a build/restoration thread of the Feldkamp's newly acquired vintage class 8 truck which will race the 50th anniversary 2017 NORRA Mexican 1000.

If you need further proof that the world has flipped upside down, consider this... For the past couple years Walker Evans has been racing an Alumi Craft Class 1 Buggy at NORRA and now long time Class 1 racers Bud and his son Buddy Feldkamp have purchased a vintage Class 8 truck to race NORRA!

For those of you who haven't been around desert racing very long, Bud Feldkamp has been racing in the desert since the beginning. In the '70's he and his partner, Malcolm Smith pretty much owned desert racing mortgage free with multiple overall wins in the Baja 1000, 500, Mint 400 and every other major race in the iconic Bel-Ray Bullet. In October of this year, Bud Feldkamp will be inducted into the Off Road Motor Sport Hall of Fame. Bud has been racing non stop for over 40 years and is also President of Glen Helen Raceway. In recent years, Bud has teamed up with his son Buddy to run SCORE and NORRA races with wins and podium finishes in both series.

Why would a died in the wool buggy guy buy a truck? Well there is a third generation of Feldkamp racers on the way and Bud wanted a third seat available for his grandson's.

About a year an a half ago, Bud inquired about a race truck that was for sale only to find out that a deal had been struck the day before by a guy in Texas. The new owner was looking for someone to restore the truck and decided to have Dave Tilton do the restoration and prep. In February the truck was delivered to Dave Tilton at the Parker 425 as he also preps and works for Jake Johnson. Dave took it back to Redlands. Well it just so happens that Dave Tilton is also the mechanic/prep for the Feldkamp's. Small world! Not long after the truck was in the Redlands shop, the owner decided to sell the truck. It was convenient that the truck was already in Bud's shop! Bud and Buddy looked it over and decided to pull the trigger. 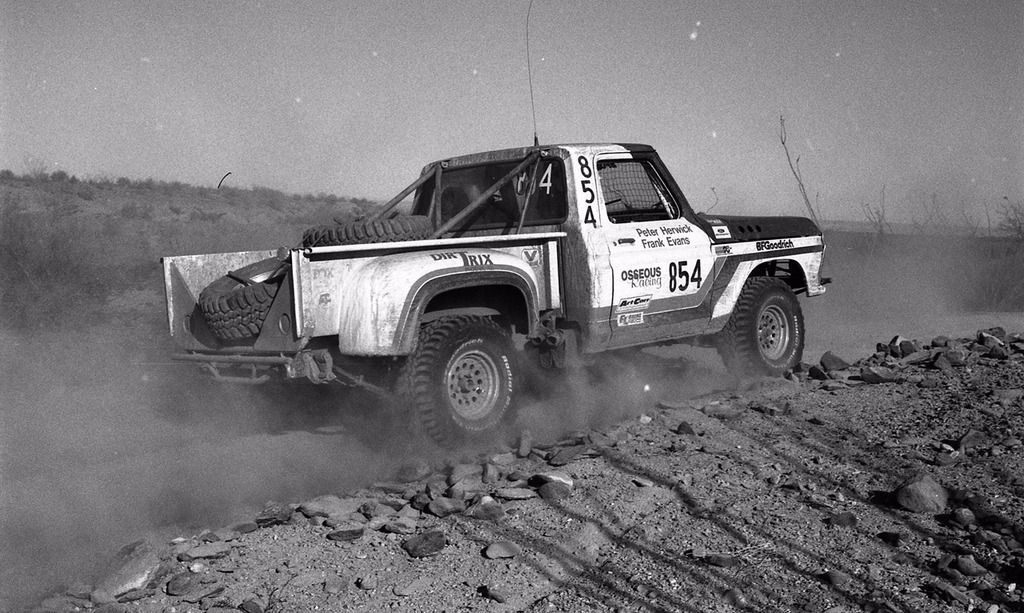 After a couple of races, Peter wasn't happy with the full leaf rear suspension, so during contingency at a race Glen crawled around Robby Gordon's Hay Hauler armed with a camera and measuring tape. The Herwick truck was then converted to quarter elliptical in time for the 1989 Baja 1000. 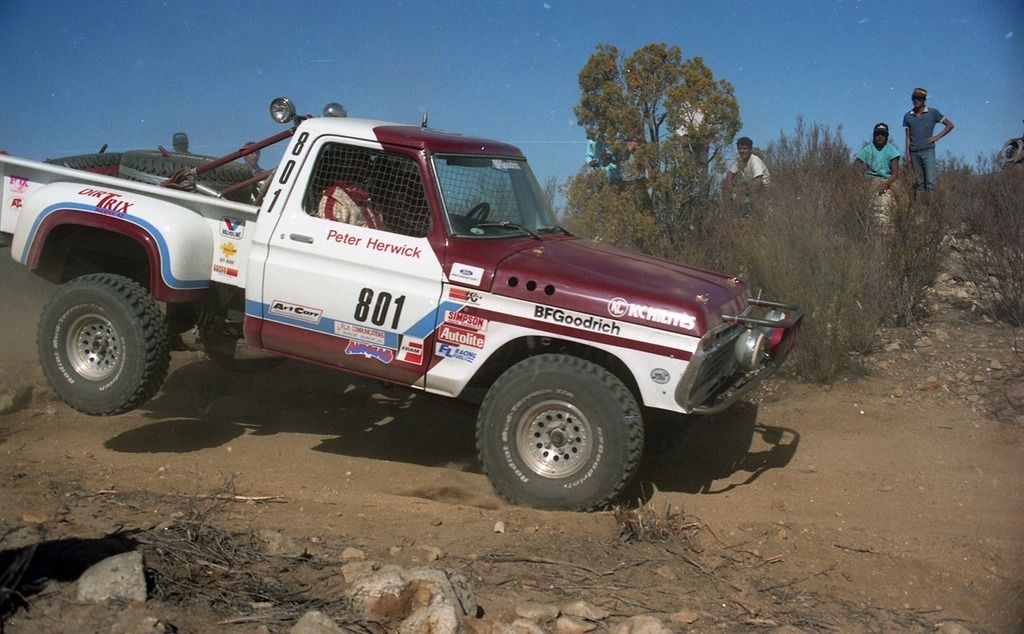 I am not sure how the truck finished but it did finish the '89 Baja 1000. Early in the race if suffered a right rear flat and ended up on its side. To this day the truck still has the spare on the right rear with the flat tire secured to the back of the truck. After the race it was driven to a car wash and after the wash it refused to start. The truck was parked and the seats which were borrowed for the race were returned. The rest of the truck sat exactly as it came of the Baja 1000 for almost 30 years.

This truck is an amazing time capsule that even still has the race notes taped inside the cab. 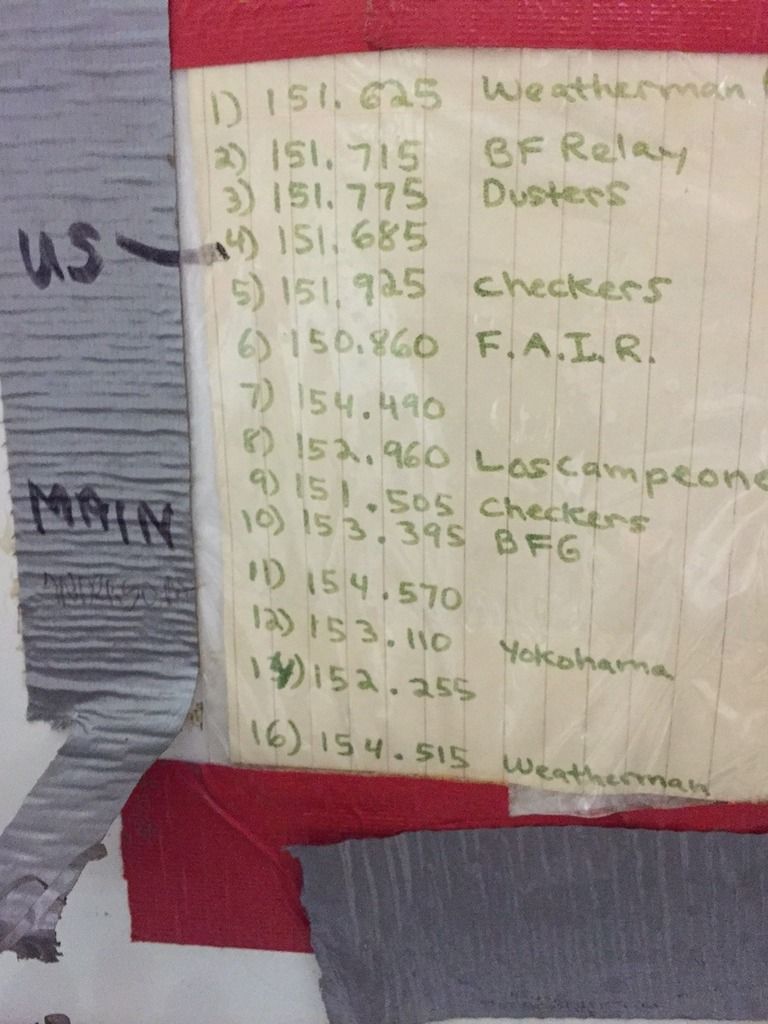 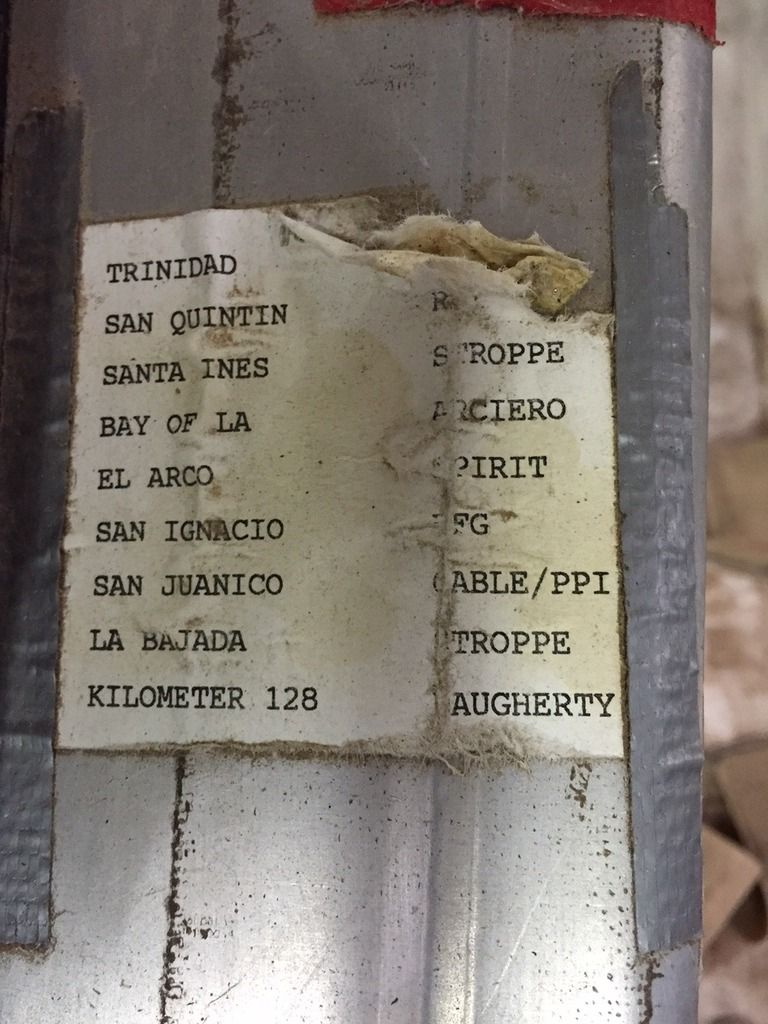 Even the shovel is still there along with the water thermos that was plumed to the driver. 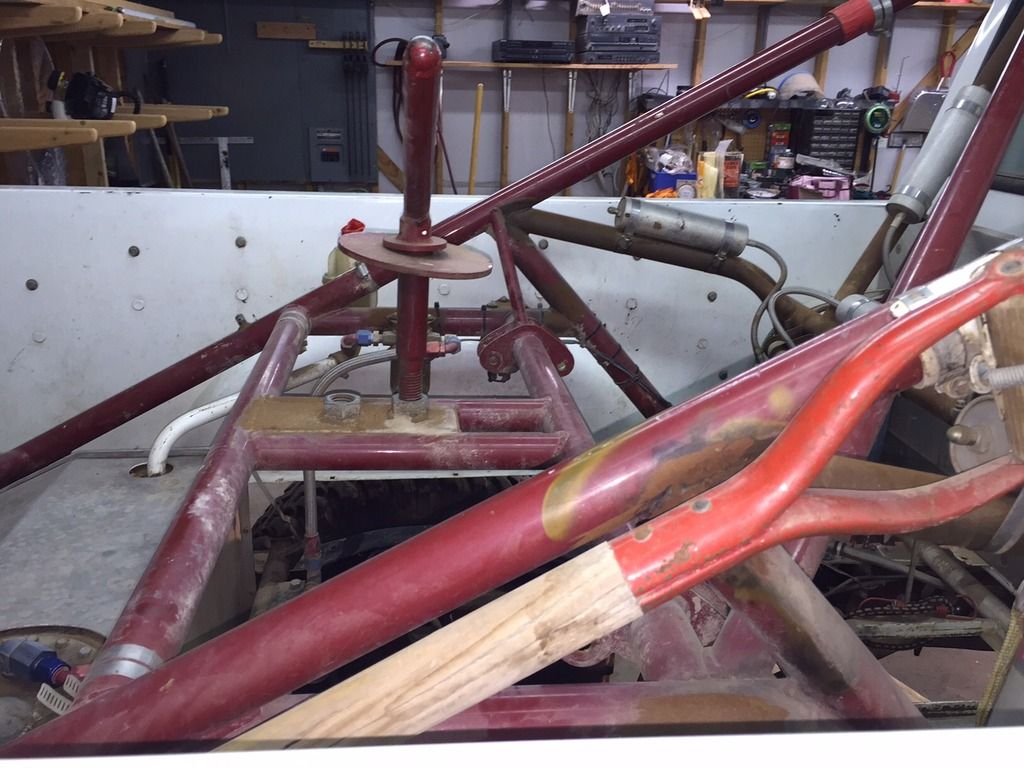 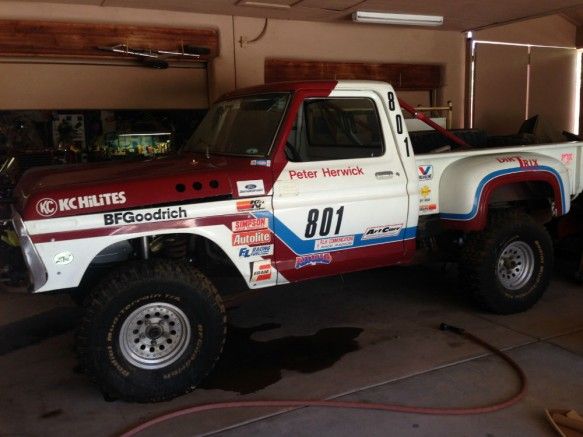 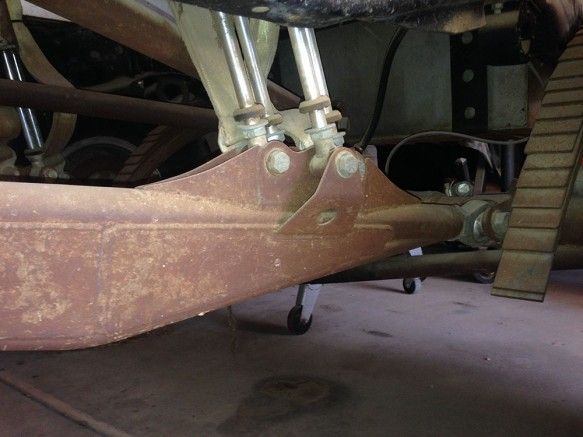 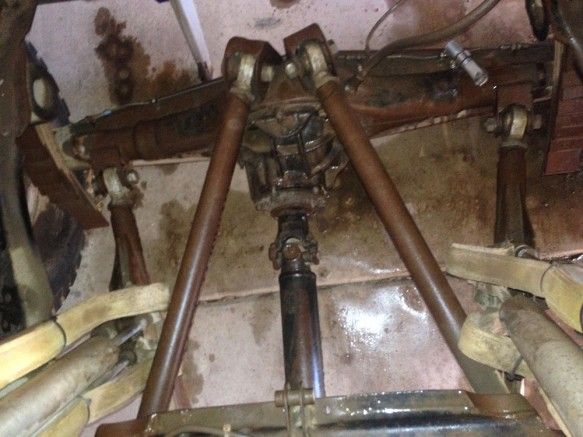 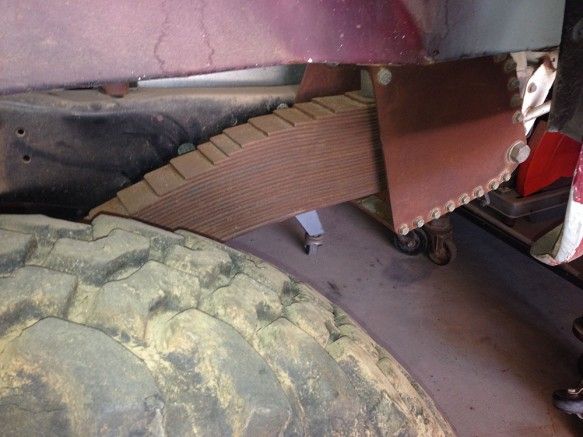 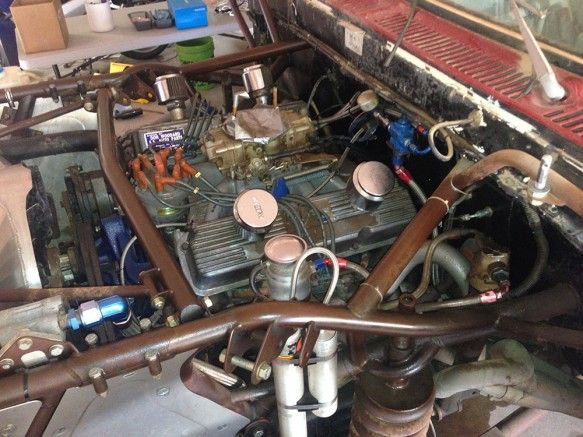 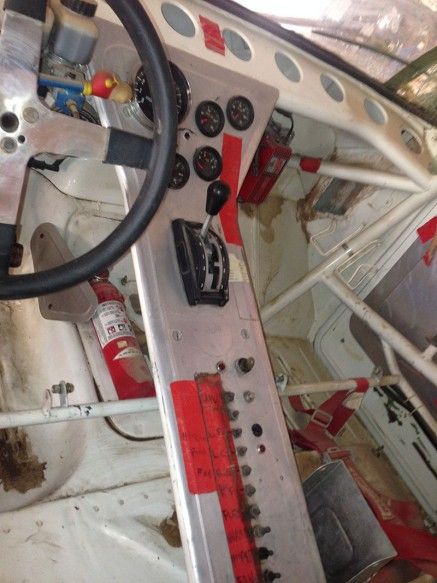 Dave started the tear down yesterday. I will update as soon as I have uploaded the pictures.
Last edited: Aug 4, 2016

this is Old School Cool!!!

No I drive the Funco SS2 that is also in the Feldkamp shop. Dave Tilton built and owes that car with me. The Funco got an award for best vintage buggy at the 2015 NORRA race, so Dave builds a great car. The Texan is a circle track racer that was looking to move to desert racing. He contacted me because I live nearby and he wanted to learn more about NORRA after buying the truck. He talked to various people about restoring it and settled on Dave. I rode with him from Texas to Parker to deliver the truck. It worked out well as we got to enjoy the race.

That has to be the thickest leaf pack I have ever seen!

Bummed that Bud is switched to a truck, but I cannot say that I blame him. Mark Stahl won the Baja 1000 in a buggy too but sure seems to be having fun at the Mexican 1000 in the Filmore Ford. And he usually looks a lot less wore out at the finish line than Bud does.

What NORRA class would it race in? Challenger?

Dirty Harry said:
That has to be the thickest leaf pack I have ever seen!

Bummed that Bud is switched to a truck, but I cannot say that I blame him. Mark Stahl won the Baja 1000 in a buggy too but sure seems to be having fun at the Mexican 1000 in the Filmore Ford. And he usually looks a lot less wore out at the finish line than Bud does.
Click to expand...

LOL!! I guess you have seen Bud at the finish line! He had to cancel NORRA this year because of back surgery so the truck should be much better on his back than the Bel-Ray Bullet. After getting an MRI on my back after this years NORRA driving a '70's era Funco, I can see why the guys who raced in the '70's might have used up their backs and want to drive a truck.

bajaxp said:
What NORRA class would it race in? Challenger?

Yes, the truck will run in Challenger. We also hope to show up with our Legend era Funco as well a Pro Unlimited entry. Get busy Dave!!

Awesome!
"The strongest reason for the people to retain the right to keep & bear arms is, as a last resort to protect themselves against tyranny in government." Thomas Jefferson

LantanaTX said:
Why would a died in the wool buggy guy buy a truck?
Click to expand...

I was following along when this truck left Phoenix some time back. Great to see it going to the Feldkamps - they'll have a lot of fun with it and glad to see it'll be back in the desert again.

Dirty Harry said:
That has to be the thickest leaf pack I have ever seen!

Bummed that Bud is switched to a truck, but I cannot say that I blame him. Mark Stahl won the Baja 1000 in a buggy too but sure seems to be having fun at the Mexican 1000 in the Filmore Ford. And he usually looks a lot less wore out at the finish line than Bud does.
Click to expand...

After I got to race my 3 time Baja 1000 winning Chenowth 1000 in the 2011 NORRA Mexican 1000 I new I wanted to compete in this great and fun race every year. A single seater is a blast to drive but you are on your own out there. I knew I wanted a Class 8 truck that I could restore and put 3 seats in so friends and family could enjoy the Baja racing experience with me. We have been lucky and have had some great times. It has been very rewarding for me and everyone that participates every year. I think the camaraderie with everyone at the NORRA race makes it one of the most fun races you can do.

I received an email from Bud that stated "The real reason I am going to a truck" Attached to his email were two x-ray images of his back. He said I could share them, but medical records seem a bit personal to post and some of you might be eating when you read this. The lower section of his back appears to bionic/titanium. I don't think we should be asking him: "Bud, when will you be back in the Bel-Ray bullet?"

The Tear Down Begins 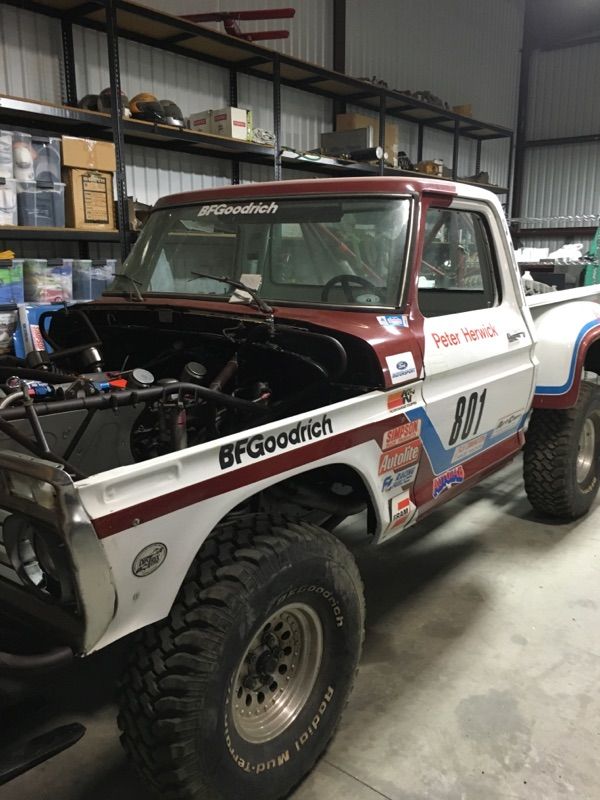 Dave Tilton starts the tear down 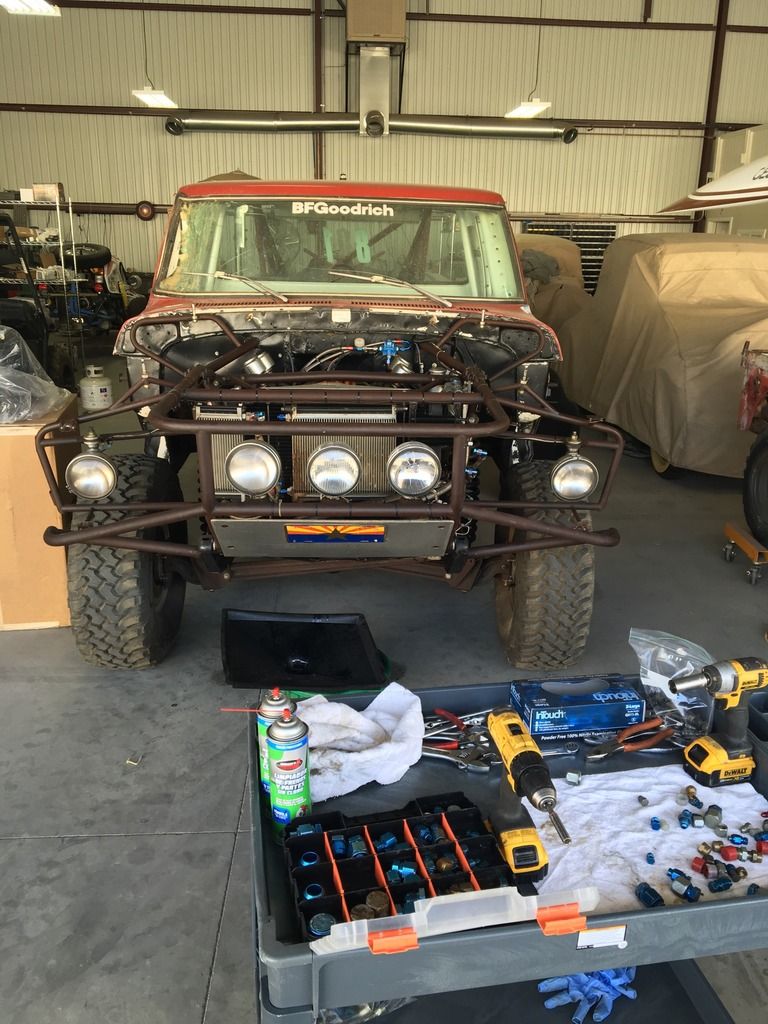 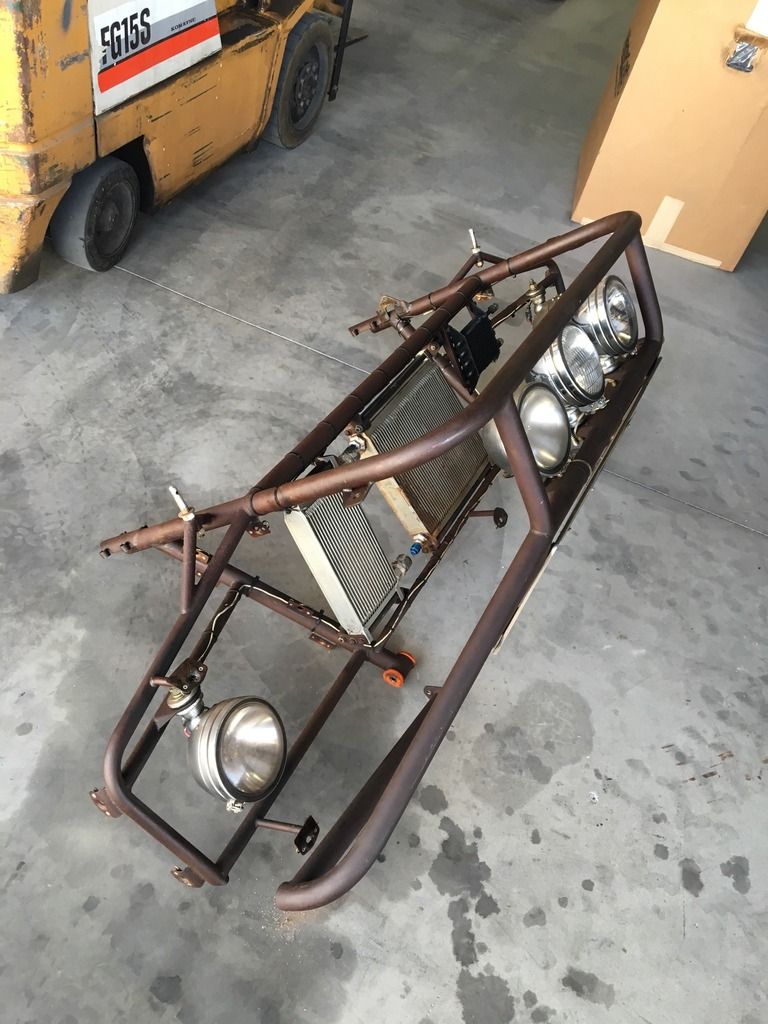 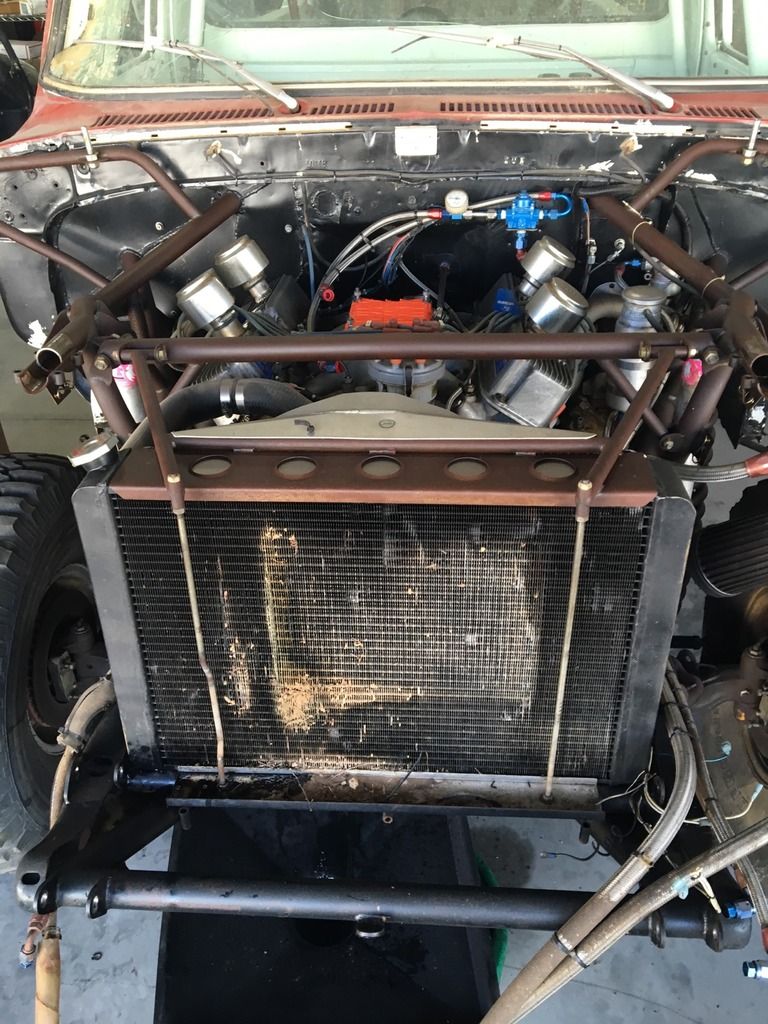 Engine and Trans is out. Engine is now crated and ready to ship to FE Specialties in Auburn CA FE Specialties-The West Coast Ford Performance Specialist 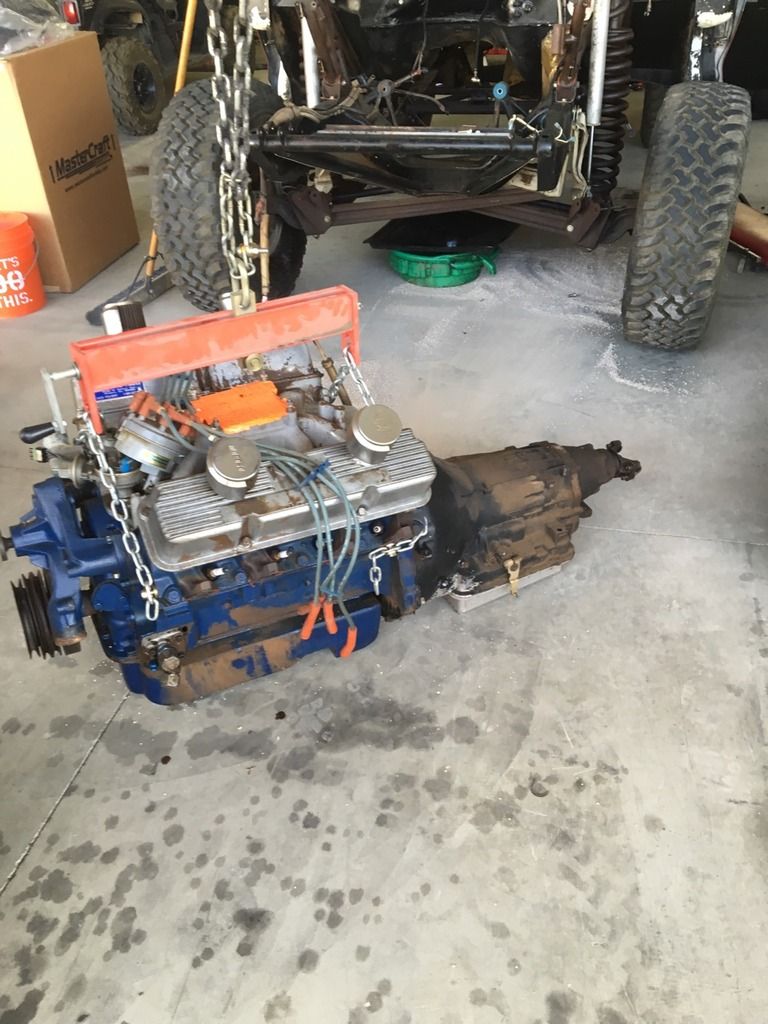 Dave has been very impressed with the build quality done by Glen Evan of Dirtrix. Besides all the bolts being done correctly, on thing that surprised him was the quality of the braided stainless lines that are also nice and flexible after sitting for 27 years. I did some checking and found out the lines were built by Garrett Turbine Engines. These lines are what is used to plumb a jet engine!

Here is something you don't see everyday. An aircraft hydraulic filter in the power steering system. I believe something similar is common in today Trophy Trucks. 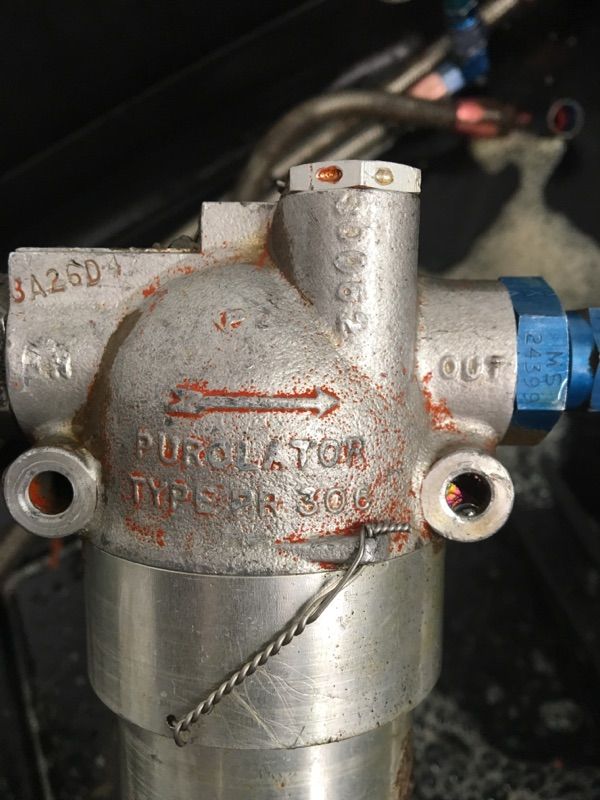 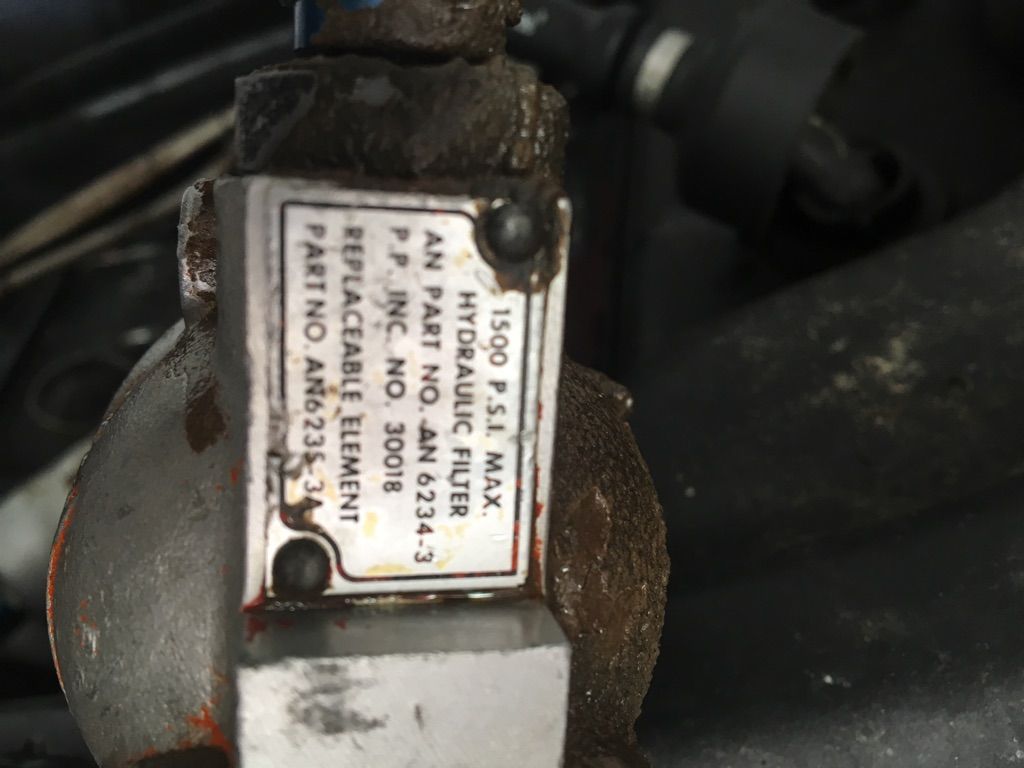 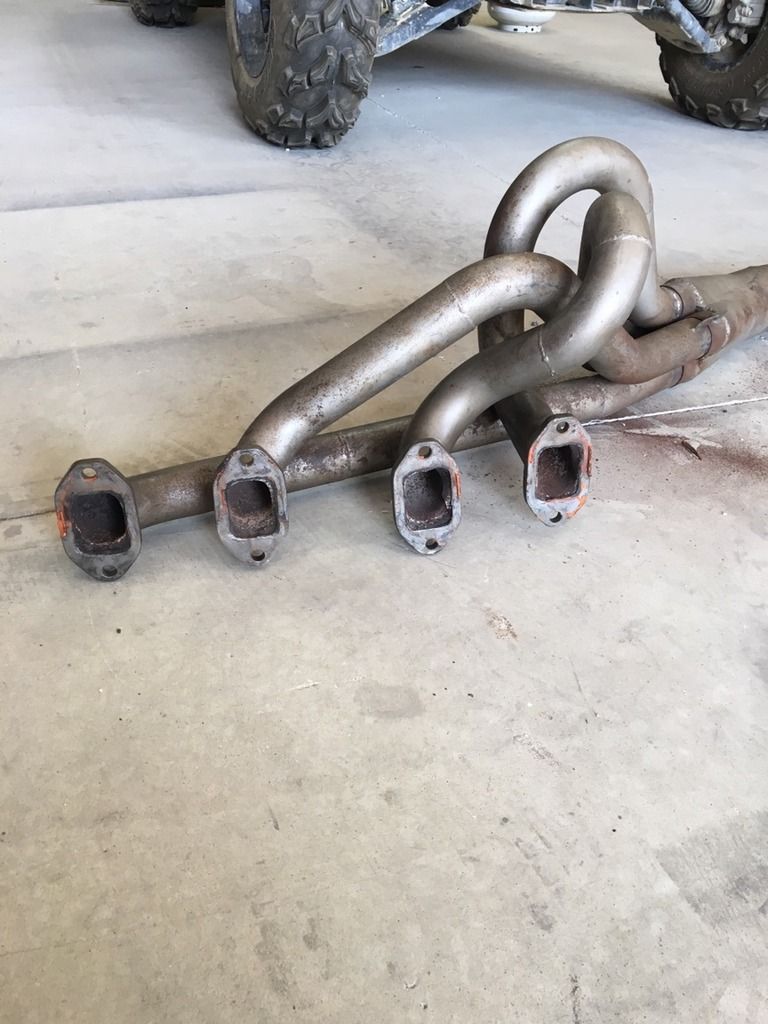 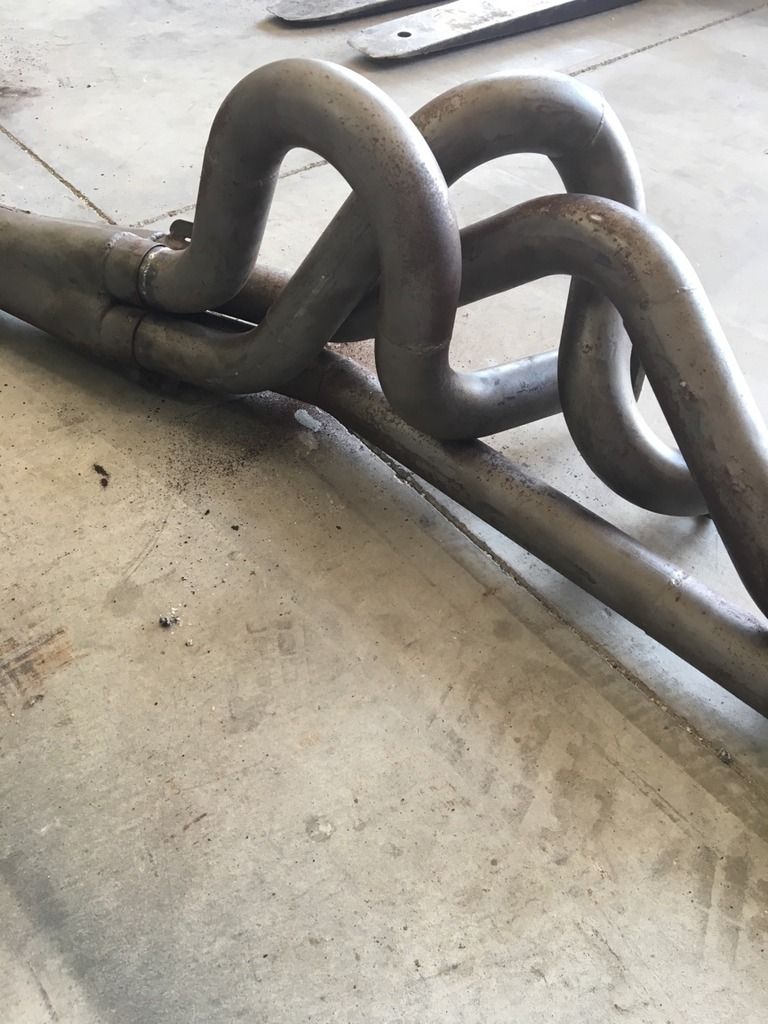 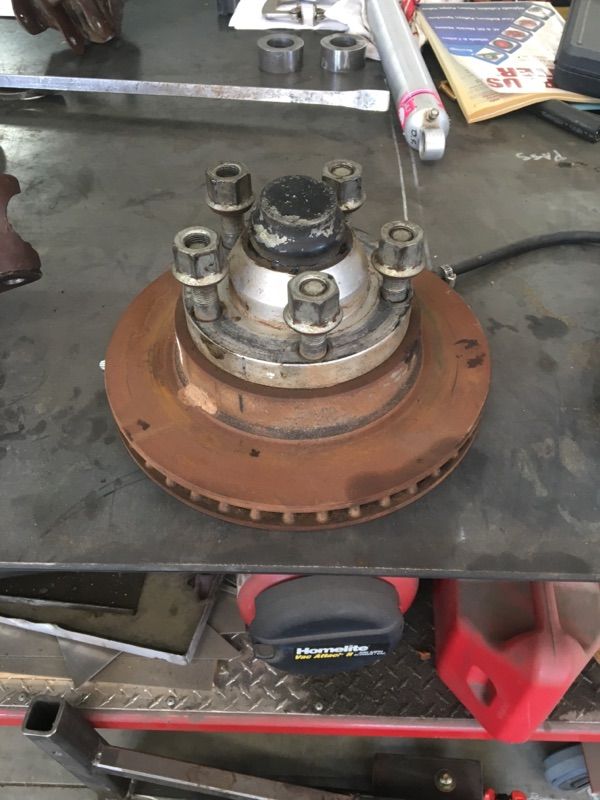 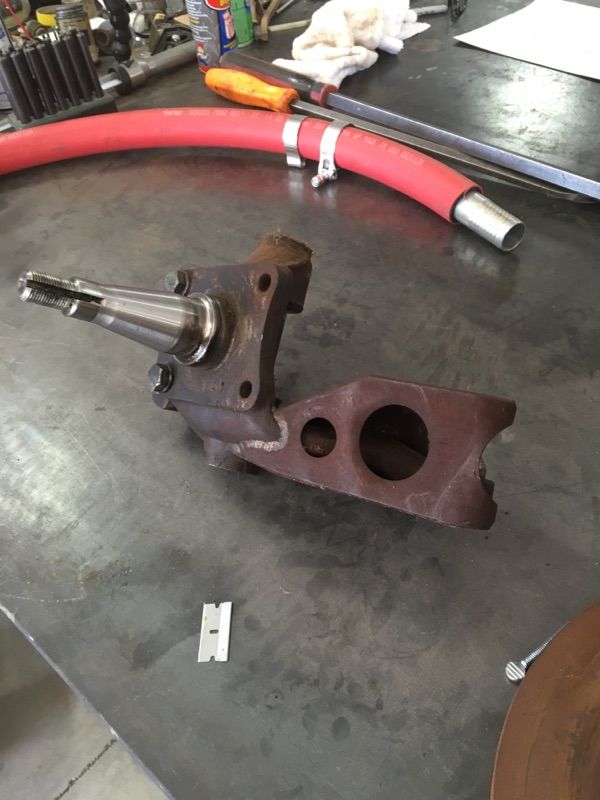 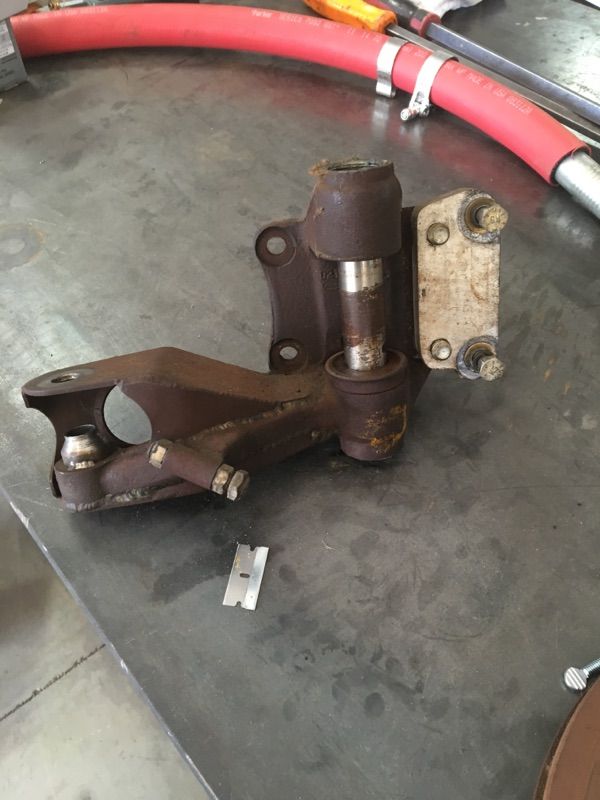 Super rad. Are those beams stock?
Nikita Khrushchev said"We can't expect the American People to jump from Capitalism to Communism, but we can assist their elected leaders in giving them small doses of Socialism, until they awaken one day to find that they have Communism. "

Those look like Autofab bent stock 1 ton HD beams......I would love to see a picture of the power steering box and the like.
This is really great news , although there is a far amount of vintage class 8 trucks out there...... getting them all to show up is the challange
Last edited: Aug 7, 2016
[SIGPIC][/SIGPIC] " F..k you kid this is my goose killing hat " -Ted Nugent, Riverside Raceway

It also looks like the front coil springs are moved back onto the radius arm similar to the Hay Hauler.
[SIGPIC][/SIGPIC] " F..k you kid this is my goose killing hat " -Ted Nugent, Riverside Raceway

Quailhunter said:
It also looks like the front coil springs are moved back onto the radius arm similar to the Hay Hauler.
Click to expand...

The owner was a surgeon and this was a "money is no object" build. He paid Dirtrix to copy the Hay Hauler. The I beams are 1 ton as mentioned above.

Btw, the current plan is to paint the body white and make it into the Glen Helen Truck. We believe the truck has less than 5 races on it and so far have only confirmed 3 races with the '89 Baja 1000 as its last. Anyone know the results for class 8 for that race? All I know right now is it finished.

The 2017 NORRA race should be a great battle with Feldkamp's racing Rory in Ivan's Toyota, Dana Dague and the rest of the fairly good size class. There are a lot of vintage class 8 trucks out there but I haven't seen any with the quarter elliptics.

Sent from my SM-G920P using Tapatalk

Ben Abatti has the 66' Ford now and it was prepped by Stewarts race works for this years NORRA but didn't race, he has the 1/4 elliptical set up on the rear. I'm guessing Ben might be waiting for the 2017 event to bring it back out to NORRA (raced and won in 2010). The truck is quite the find, would have bought it if i hadn't spent all my money on the DirTrix. Not sure my Toyota will be completed for the 2017 event (although i'm shooting for it), might have to wait till 2018 for that match up. Will be following the build, Glenn Evans has done quality work when he owned DirTrix. 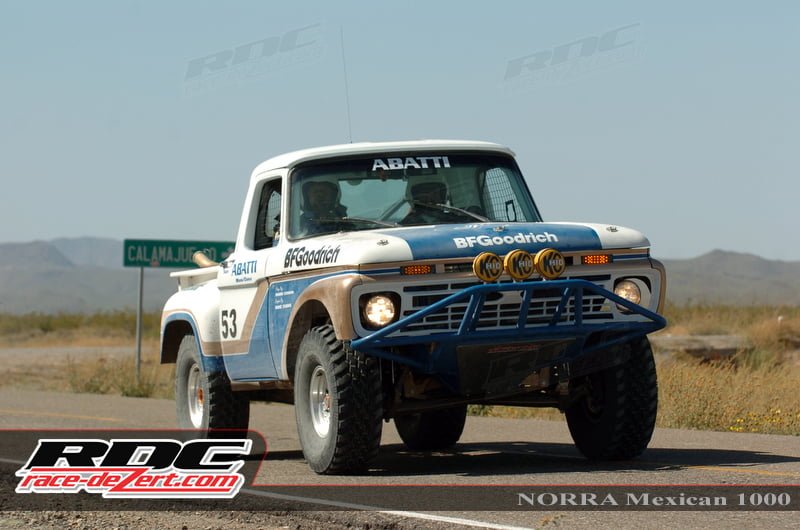