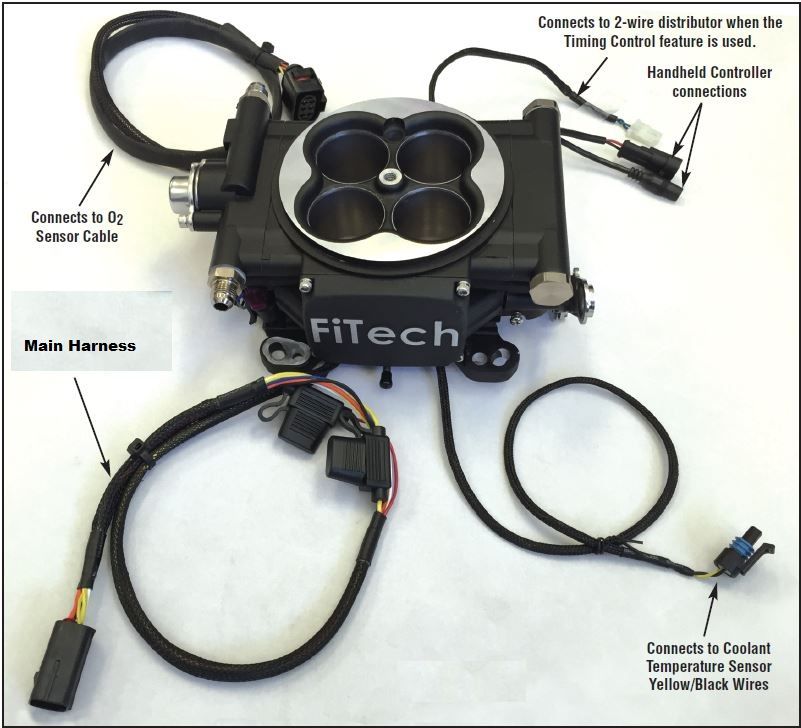 I bought one of these units just a few weeks ago. Installed it on the Humungus and it works great. I was hesitant to race with this thing without putting a lot of test miles down, but we went for it anyway. In fact, I brought my trusty carb and fuel pump and everything I needed to change over if the new FI didn't work, but it never let us down. In fact, it worked better than my high-dollar Holley with all the trick stuff on it. The system was $995 for the throttle body, sensors, controller etc and another 100 bucks for the fuel pump from Summit.

Super simple install. Unbolt the carb from the intake, and bolt the throttle body down in its place. Just about everything is built into the throttle body itself, including the actual computer which is the flat plate with FITech printed on it. The throttle position sensor, MAP sensor, Idle air control, injectors are all built in. The only external hookup with the O2 sensor (which required me to weld in a bung in the exhaust pipe), the coolant temp sensor, and the distributor hookup. If you think you're going to run your vehicle on a dyno, install another o2 sensor bung while you've got the welder out and plug it.

You can run this thing just like a carb with a centrifugal advance distributor, or you can actually control the spark with the onboard computer. Just tell the controller which way you want to go. I switched over to a locked out billet distributor and hooked it up for computer controlled spark. All you do is tell the computer what the base timing is (14 degrees for me) and what the total timing should be (34 degrees for me). Then start it up and use your timing light to adjust the distributor so that the actual timing at idle matches what the controller is showing for timing. When the controller and the damper are reading the same timing at idle, you lock the distributor down and the computer does the rest.

You need to use an adjustable rotor to make sure that the contact tip is close to the distributor cap post throughout the timing curve if you're going to lock out the dizzy and use computer timing. In other words, when its at 14 degrees the tip is just past the post and when its at 34 degrees the tip is just prior to the post. That way you get a good spark all the way thru the timing range. I used an old cap and drilled a hole in the top so I could see the tip for making the adjustments. Also, trust me when I tell you that the lock down screw on that adjustable rotor needs to have locktite on it! When it comes loose and the timing goes full retard you will spend a good deal of time trying to figure out why your motor just stopped running, if you're anything like me.

Just about my only complaint would be that the wires in the harness should be a little longer so you don't have to do any splices. What I did instead of splices, since I hate splices, is put a terminal junction block on the firewall. I terminated each of the harness wires to one side of the block, and then was able to run a clean set of wires from there to the various places they need to go.

One of them is the fuel pump wire. The computer automatically turns on the fuel pump through one of the wires. It wasn't long enough to reach the rear of my truck where the fuel cell is and I was a little concerned about how much current it would draw. I used this wire to activate a relay instead with a decent run of wire back to the pump. The computer is smart about running the pump, it gives it a prime when you turn on the key then shuts off. It also shuts off when the ignition stops. Also, this isn't a PWM, or returnless system. The regulator is also built into the throttle body. There are 3 inputs for your pressure line that you can choose from, and one dedicated return line.

The first time I turned the key it fired right up and idled right at 800 rpm. I thought it sounded funny and was surging a little so I shut it off and found that two plug wires were disconnected! This thing really does everything it can to make the motor run, even if it doesn't want to. It is a self-learning device so it gets better as you drive it, but it doesn't take long for it to run really well. Man, after running a carb with no choke, being able to just start this thing up and have it idle perfectly whether in gear or not is like a dream.

The only "malfunction" we had during our race was that the exhaust came apart at the collector due to the bolts loosening up (V-band clamp upgrade is next!). The o2 sensor was just downstream from the collector, so it sensed a super lean condition when all that outside air flooded into the exhaust. It started injecting a lot of fuel into the motor to try and "correct" the AFR back to target, which resulted in running super rich for a while. In fact, we even started a little fire due to too much fuel making it into the exhaust. Anyway, we got the exhaust bolted back together and it ran fine again. My fuel mileage went up from about 5 with the carb to 6+ with the new EFI. That is a LOT of range. I was doing 200 mile sections on 32 gallons of fuel.

This system costs half of what an Atomic or FAST or Edelbrock system costs, and I think at least some of those systems don't even control spark. I was worried the quality might reflect the low price but so far everything seems to be top notch. The only changes I would suggest would be longer wires in the harness, and a better quality NPT adapter for the coolant sensor. Very happy with the overall quality and performance of this unit so far. The tech guys were also super helpful on the phone as I peppered them with questions before turning the key. The instructions were pretty simple but I just wanted to make sure I knew what I was doing. 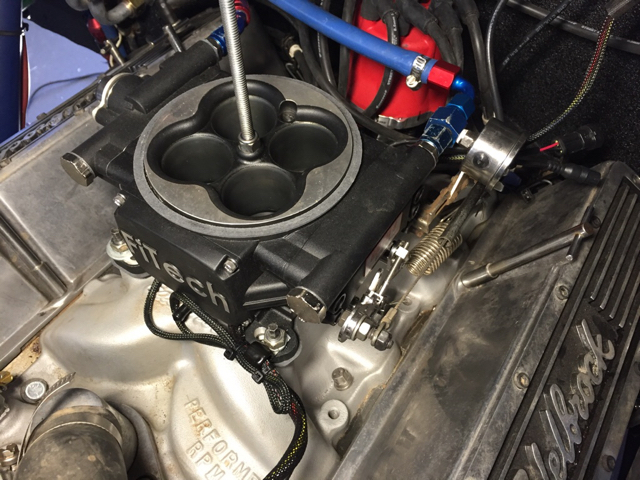 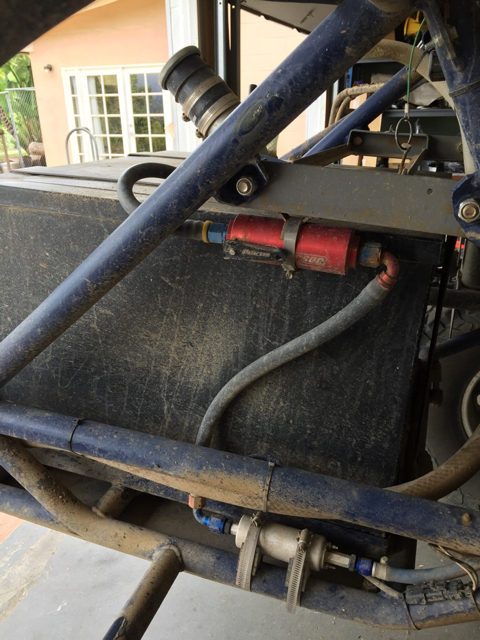 You run a traditional "hot rod style" k&n? Can you run an UMP style? Let's see your complete intake setup. Lastly, that's pretty awesome!!!
Nikita Khrushchev said"We can't expect the American People to jump from Capitalism to Communism, but we can assist their elected leaders in giving them small doses of Socialism, until they awaken one day to find that they have Communism. "

I just run a regular old 14" round k&n with a foam wrap.
Necesito más cencerro

It was a Holley HP 750cfm, mechanical secondaries.

BTW I might have forgotten to mention that if you use the computer in the FITech to control spark, you can either send the signal straight from the unit to a conventional coil or you can connect it to the points wire on an MSD box if you want the multispark. Thats what I did but I also was starting from scratch with a new engine and a complete teardown for paint. If my truck was still together and running I probably would have just left the HEI distributor in place and fired it up first that way and then gone to the computer and spark box later.
Necesito más cencerro

Oh and I have a trick off-road carb to sell if anyone wants one.
Necesito más cencerro

When I saw this thread come up I instantly thought about its use on our Jeep Honcho restoration/rebuild. As I read up on everything, seems like the product has taken off like a rocket, yet the company cannot keep up with demand. I've read some nightmare reviews...Has anyone heard if they've increased production??

I think you're right about backlog. It took me about a month to get mine. When I got the note they were back ordered I called Summit and was told they were waiting to ship 25 units. Jegs was similar. FITech is in Corona so I had them drop ship my order from Summit and that saved a few days. BTW they test every unit in house after they receive it from production before they ship it out.

Rad! Thanks for the post. What pressure does the fuel need to be? Is this a TBI or high pressure injector setup?

Also, when you do v-bands get the flanges that are male / female so the shear is taken off the clamp itself. I discovered v-bands a few years ago and I can't imagine going back to flat flanges (suck) or ball flanges (better). I can pull my exhaust off and put it back on in less than 2 minutes now.
Follow me on Instagram. @philofab1

philofab said:
Rad! Thanks for the post. What pressure does the fuel need to be? Is this a TBI or high pressure injector setup?

Also, when you do v-bands get the flanges that are male / female so the shear is taken off the clamp itself. I discovered v-bands a few years ago and I can't imagine going back to flat flanges (suck) or ball flanges (better). I can pull my exhaust off and put it back on in less than 2 minutes now.
Click to expand...

I believe it regulates to 48 psi but I'd have to check. The summit inline pump that does 255lph works fine.

As for v-bands, when you install then you're supposed to have a little of the pipe stick through the first half and nest inside the other half.
Necesito más cencerro

Thanks @Zambo this is really good to know, I was thinking about maybe megasquirt but this is hard to beat for the price and it seems that they really have the technical kinks worked out..
S

Any long term updates on the FI Tech for offroad use?
Thanks.

shawn t said:
Any long term updates on the FI Tech for offroad use?
Thanks.
Click to expand...

Sold the truck months ago but I never had a problem with it. Seems that other companies have followed the lead and have FI systems in this price range now too. I’ve even seen two barrel units for smaller applications available.