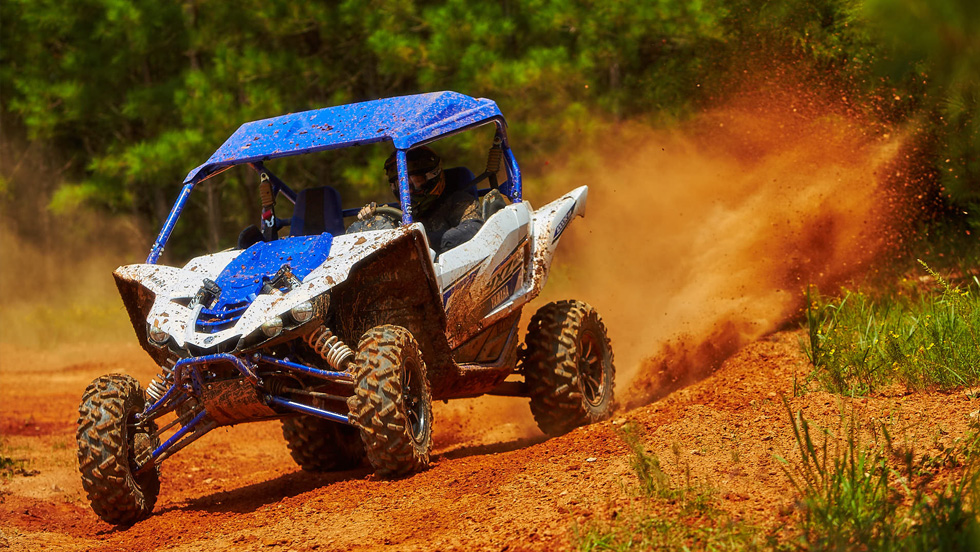 When the world first heard the roar of Yamahas inline triple cylinder sequential shifting YXZ1000R ripping around an exposition track back on September 1st 2015 it was only a matter of time before the challenges began to add up. With many looking on in disbelief, Yamaha had introduced a machine that, for all intensive purposes, would change the thoughts of loyal consumers in the world of SXS. It was the dawn of something new in the side-by-side industry and the market was alive with chatter. Although the clutch shifted machine was not for everyone it did give those who never knew they were missing something a brand new exciting ride.

Fast forward a few short months and Yamaha has once again added to their line of YXZ1000R machines by giving drivers who may not easily adapt to a clutch shifted machine and added paddle shifting to the fold. These extra wings just behind the control circle on the sides of the steering wheel give the driver an option and in the woods of South Carolina it was our turn to turn up the heat on what would be an incredibly exciting day of testing in the latest version pure sport machine called the YXZ1000R SS. 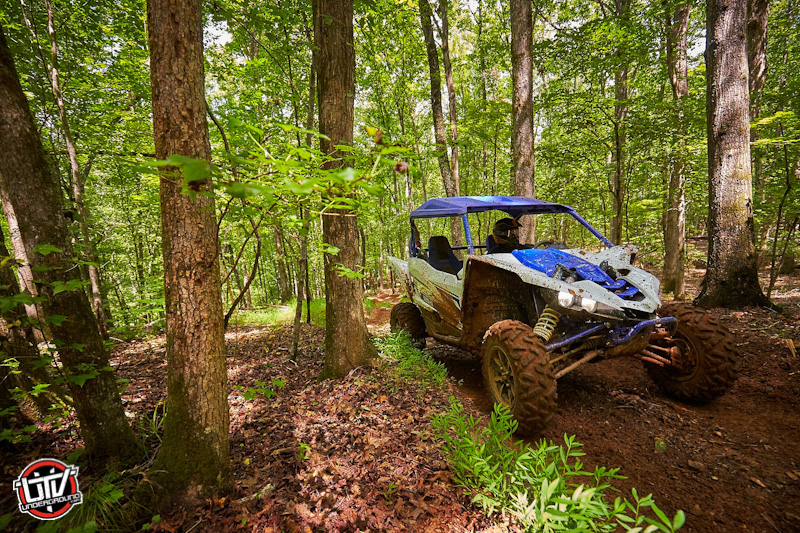 For many years now the Grand National Cross Country race series has come to the South Carolina woods to property owned by Hank Turner. The Big Buck GNCC ATV and UTV racing is held here every year and in the tight wooded hills of Union SC we would challenge ourselves to learn the “SS” or Sport Shift version of the YXZ1000R. Big Buck may look like relatively flat land but once you slip off into the woods the terrain becomes deeply diverse fast. The rocky, root filled hill climbs and muddy off camber trails here are tight and covered with the tall southern pine trees as well as various hard woods that love to take chunks of machines for souvenirs. This would be the perfect arena to test the Naysayers theory that the YXZ was not made for the woods.

From the outside you will not notice much difference in the Sport Shifted version of YXZ1000R or the manually shifted rig we were first introduced too and the only obvious change is the absence of the short shifter in the console as well as the loss of the clutch pedal in the floor. It is when you sit down into the plush high back seating and reach for the steering wheel that you will know something is really different. The paddles are just behind the steering wheel and easily reached with your fingertips. Shifting or manipulating the paddles becomes second nature once you are in motion and just a gentle touch can get the transmission into the next level of fun. The shifter is replaced with a drive position gated shift lever that simply lets you get the YXZ1000R SS in forward High/Low and reverse. The real secrets lye hidden in the transmission of the machine and are incredibly technical but allow the driver to focus only on the trail. 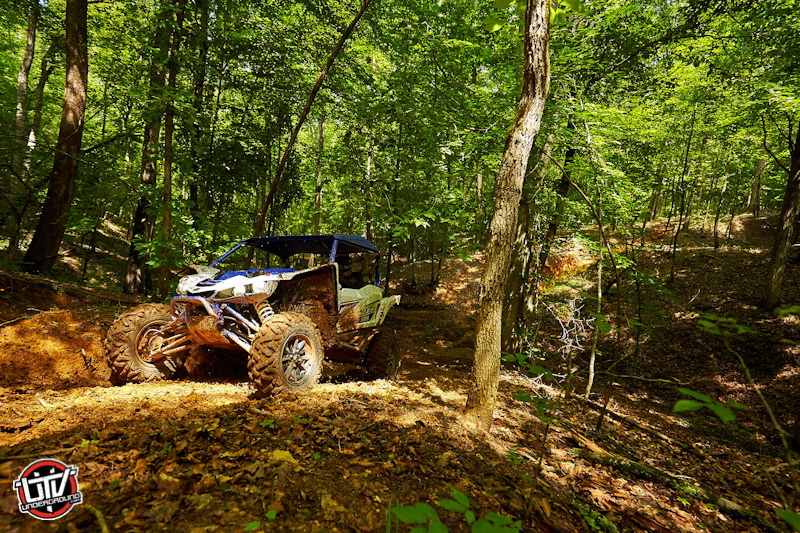 One of the first features of the newest YXZ is launch control. This gives those who need bragging rights something to show off. With the brake pedal pressed and both paddles pulled towards the driver you will notice the green launch light appear on the dash. While holding the steering wheel you simply step on the go pedal until you get the revs above 5000rpm or listen for the rev limiter bang at 10,500rpm as we did and then you drop the paddles for the take off of a life time. Then with the gas pedal still on the floor this YXZ1000R SS will lung forward as you flip the up shift paddle you can keep this fiery engine pumping out in front with the hell raising no-lift-shift. This feature was kind of tricky to learn but once you can get your head wrapped around the fact that redlining this engine is more natural than we think is normal you can begin to really get a grasp on just how cool that feature is. There were so many times when the train of YXZ’s rolling around the woods of Big Buck just had to stop and give the launch a try and that included us.

The real fifty thousand dollar question for some was, just how well am I going to be able to drive this machine in the woods and will I be able to concentrate on the trail. Is it still going to be tiring for my legs or mind? It was not long into our drive that we had finally realized we were not really thinking about which paddle was up shift (right side) and which paddle might throw the high revving triple into screaming downshift (left side) mode. Yes it did happen a time or two but we did notice that if we mistakenly down shifted when the engine could be placed into an abnormally high RPM the onboard computer would actually correct us and negate that shift. It was virtually protecting itself from our learning curve. Yamaha engineers confirmed this bit of information and we were told that not only down shifting at an inopportune time but trying to up-shift when the RPM’s were too low was something the machine would not do. This protects vital internal components and we would say it could prevent premature detonation of the engine cases as well. Another cool feature of the transmission is the fact that if you get lost in the incredible sound of the engine and forget to downshift when coming to a stop the YXZ-SS will automatically bring the transmission back to first gear. 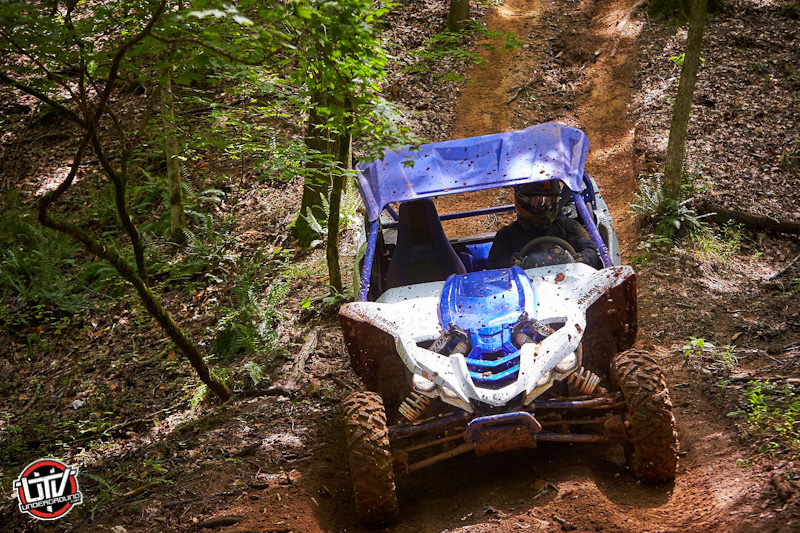 So the as we mentioned, the rock and root filled hill climbs throughout Mr. Turners Big Buck property could hang up a driver who might not be as experienced when using a clutch. However the YXZ-SS seems to have that issue under control as well. There were three or four very long and steep inclines on the trail system there where Yamaha guides had us each stop in the middle of the hill to simulate a potential hazzard or stuck vehicle in front of us. The test was a bit concerning at first but when we were instructed by our guide to step down aggressively on the go pedal the YXZ1000R SS simulated a stutter or fanning of the clutch to get grip and pull us on up the hill. This is kind of hard to explain but imagine your stuck on an incline in a manual transmission truck or jeep and you have to fan or bump the clutch to get moving again without stalling. That is exactly what the YXZ1000R SS does for you all so very seamlessly that you have to concentrate a little to even notice. Getting this small detail in place for even the most inexperienced rider means Yamaha has opened many more doors for potential customers.

So how does the rest of the YXZ1000R SS deal with tight woods and long tree covered low canopy countryside? The engine performance is incredible and works hard to keep the level of excitement up during the sometime’s slow speed twistie’s in the trees. This platform just begs for aftermarket part manufacturers to drop new power adders onboard. Obviously the FOX shock packages are inline with the Original YXZ1000R and it can only get better from here. The suspension works wonders for comfort in the tough trails and allows you to worry more about the next corner than the huge g-out that you just sailed over.

Overall the 2017 YXZ1000r SS is a great ride for those who need excitement in their off road. It provides a platform that utilizes the engine and suspension as well as most importantly the “User Interaction” that you might not know your missing until you experience it. This machine definitely gives everyone a chance to rip the mask off subtle existence and lay down some mean mugging at the intersection of “your next” and “giver hell!”