This is supposed to be an 'international rally' and may not be of interest to everyone, but the RG / Yazeed Hummer is racing.

This is actually a huge event for Saudi and with the advent of allowing women to drive, will grow.

HA’IL (Saudi Arabia): The 13th Ha’il Nissan International Rally fires into life with a 3.87km super special stage at Mashar, 5.5km from the official start in Ha’il, from 16.35hrs on Monday afternoon.

An impressive field of 46 cars will tackle the four-day event being organised by the Saudi Arabian Motor Federation (SAMF).

Nissans dominate the entry list and 25 entrants will drive cars built by the Japanese manufacturer. The top seeds are Faris Khalaf Al-Mashna and Saud Nasser Al-Tamimi in their Nissan Patrol. Al-Mashna won the event last year and is out to join Nasser Saleh Al-Attiyah and Yazeed Al-Rajhi as a multiple winner of the event in the car category. The event entered the international motor sporting calendar for the first time in 2007 after running as a club event the previous year.

The battle for supremacy in the T2 category is also likely to be tense. Yasir Saeidan brings his FIA World Cup experience to his home event in a diesel-engined Toyota Land Cruiser with UAE co-driver Arif Yousef Mohammed and faces the likes of Ahmed Al-Shegawi and his Russian navigator Alexei Kuzmich in their Toyota and Muneef Al-Salmani in his Nissan Saudi Arabia-backed Patrol.

The T3 section is also well-supported on this occasion and 11 teams will take part in this increasingly popular category for the Can-Am, Polaris and Yamaha brands. Bader Al-Tuwaijri, Zakaria Al-Tuwaijri and Fahad Nasser Al-Naeem lead the Polaris challenge and Majed Ibrahim Al-Tuwaijri wheels out his Yamaha. The likes of Khaleel Abdulrahman Al-Tuwaijri, Sami Al-Ghafari and Saleh Al-Saif represent the Can-Am brand.

They headed the Saudi driver Essa Al-Dossari and his Emirati navigator Ali Hassan Obaid by just 0.7 seconds. Driving his South African-built Nissan Navara through a new ED Racing Team, Al-Dossari carded a time of 3min 15.7sec and that was 4.8 seconds faster than that set by Mohammed Al-Tuwaijri and that enabled the Nissan driver to head the T1 runners at the overnight halt.

Saleh Abdullah Al-Abdulaali wheeled out the Hummer that Yazeed Al-Rajhi has used on two occasions to snatch victory, but the young Saudi sustained mechanical problems in the stage and dropped 29 minutes to the day’s winner.

Forty-two crews eventually took the start on the event laid on by the Saudi Arabian Motor Federation (SAMF). They were joined on the entry list by two motorcycles and four quads.

Tomorrow (Tuesday), the first of three selective sections through the An Nafud desert starts and finishes at Baqa’a and runs for 189.69km.

And before anyone comments about the amount of brothers, uncles, fathers, etc, etc, Al Shammeri is a tribal name!
Mark

And the Hummbuggy had a mechanical.

I'd love to go and shoot it!

How some of these pass scruteneering is beyond me...

Sent from my iPhone using Tapatalk
Click to expand...

I'm would not be surprised if it is now being maintained locally...

Like GEO_DXB says, how some of these pass scrutineering....
Mark

Would be fun to post some pics of the Hummer to the RDC crowd, there would be some heart attacks from service quality. Not even zip ties and duct tape...

The local driver clocked an unofficial time of 2hrs 20min 06sec and that was sufficient to beat overnight T1 leader Essa Al-Dossari in his ED Racing Nissan Navara.

The pair were the class of a field that was completely dominated by Nissan drivers. Nine of the top 10 positions were held by the Japanese manufacturer: Ahmed Abdulah Al-Shuhail held third and Meshal Abdulaziz Al-Saeedi and Khalid Abdullah Al-Shammeri rounded off the top five. Al-Saeedi also headed the T2 runners.

ATVs had been inside the top 10 and held the overall advantage after the super special stage, but the desert terrain was not ideally suited to these lightweight, lower powered vehicles and Talal Al-Thukair led the way in 10th overall with his Can-Am.

Muneef Al-Salmani held 11th position and fifth in T2 in his Nissan Patrol – the Hero of All-Terrains. He is running the ex-Emil Khneisser car that is supported by Nissan Saudi Arabia.

Saleh Abdullah Al-Abdulaali was not able to start the stage in his ex-Al-Rajhi Hummer, while a spectacular crash hospitalised the Toyota Land Cruiser crew of Mohammed Al-Tuwaijri and Muath Ababtain. They had been third overall at the start of the day, but were not seriously injured.

Tomorrow (Wednesday), officials at the Saudi Arabian Motor Federation (SAMF) have laid on a daunting selective section of 351.01km. This starts out of Radifah, 59.93km from Ha’il, at 08.40hrs and finishes in Umm Al-Qulban.

Do Nismo operate a semi or works off road factory anywhere in the Middle East? Nissan might look to leverage brand loyalty in some manner?

Bull-dust said:
Do Nismo operate a semi or works off road factory anywhere in the Middle East? Nissan might look to leverage brand loyalty in some manner?
Click to expand...

No, but Nissan Patrol Y61 and Y62 along with Toyota Landcruisers are the most popular SUV and some of the most popular vehicles. Y61s are real desert vehicles and popular among offroaders and racers. Saudis use a lot of Y61 pickups modified to T1 regs (or what they believe to be T1). Nissan has no real race program in the region - they supported Emil Khneisser in Y62 T2 spec car through a dealership in Abu Dhabi, but Emil was actually working for the company and hence could negotiate a small deal. They now have the same car backed up by Nissan Saudi Arabia - it is the leading T2 at the moment in Hail.


Edit - they dont need to do any marketing to sell Patrols. When the new Y61s came out this year I wanted to buy one. Not a single car was available at the dealers - all sold out right away for a few months. Grey imports were available at around 10k USD more and were nearly sold out. Basically the whole region was built with the help of Landcruisers and Patrols.

Yasir's Prado sits in the service area with all electrics out...

Essa Al-Dossari and his brand new SA built Nissan Navarra took the win on the longest stage of the event and now lead by 15 minutes going into the final stage tomorrow. 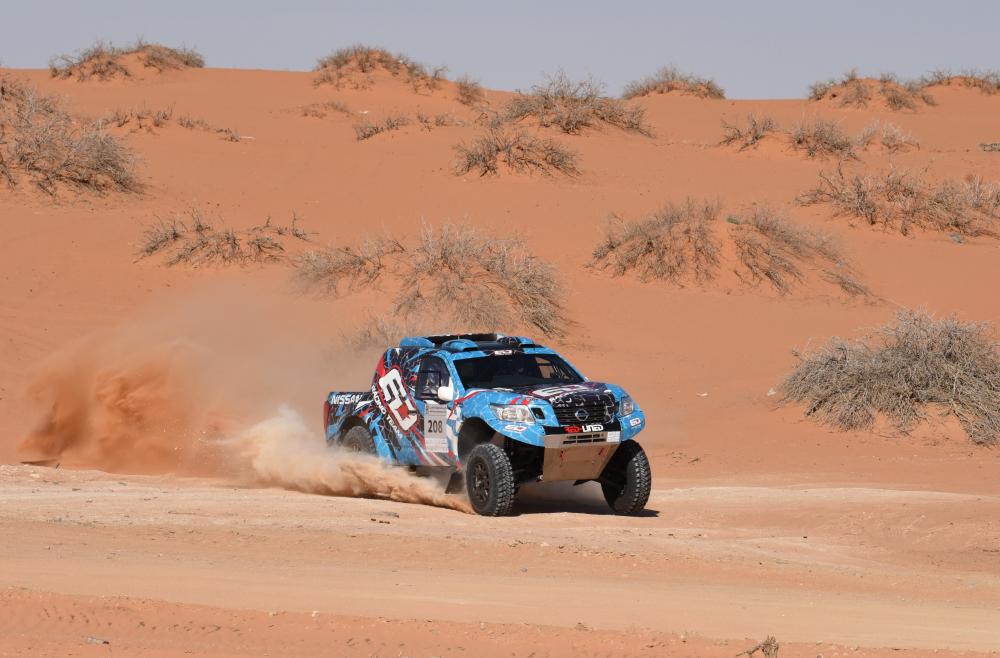 spalind said:
Essa Al-Dossari and his brand new SA built Nissan Navarra took the win on the longest stage of the event and now lead by 15 minutes going into the final stage tomorrow.
Click to expand...

Dan doesn’t care about the Humbuggy when there is a Nissan winning stages!

Dirty Harry said:
Dan doesn’t care about the Humbuggy when there is a Nissan winning stages!
Click to expand...

I think the Humbuggy was out with issues anyway!
https://danspalinger.com

And Al-Dossari takes the win in his brand new SA built Nissan! Should be a solid platform for them for a long time to come.
Essa Al-Dossari guides his Nissan Navara to victory in Hail Rally 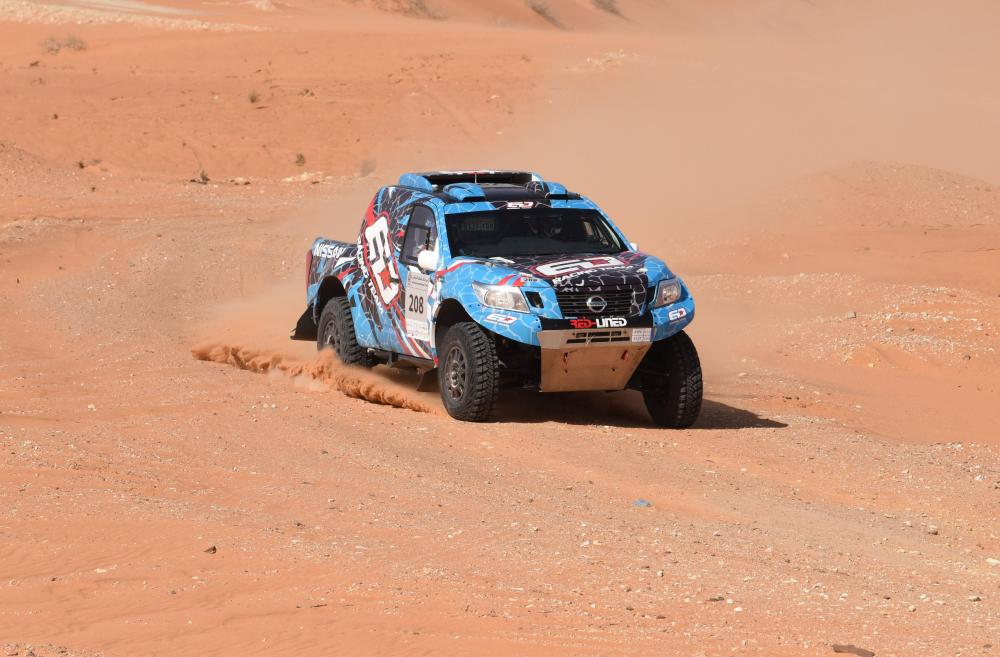