Harley Letner wins the McKenzie’s Rage at the River 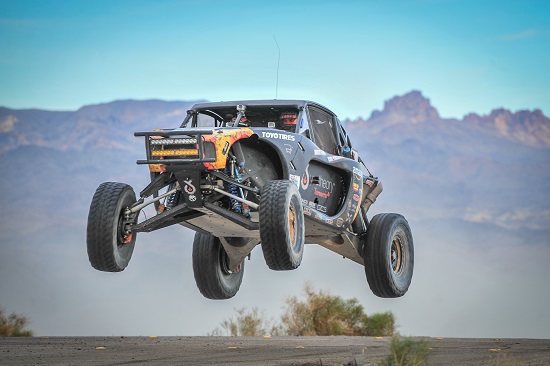 Indeed, Laughlin and SNORE go together like wine and cheese to end the year with the annual McKenzie’s Rage at the River, a wildly-successful and popular off-road racing event that drew more than 300 entries this year for participation over a tight 12-mile course just north of the city.

In a region with a spectacular backdrop of hotels and the Colorado River, the annual McKenzie’s Rage at the River lived up to the hype while Letner also lived up to his billing as a hard-driving veteran of a sport that is generally eager to bend metal, brake parts and wipe out half of the field long on any given day.

Letner, a driver for Youtheory Racing, wisely mixed the speed of his Class 1 Unlimited buggy powered by builder Jeff Ginter Racing Engines with the excellence of its suspension highlighted by King Shocks to gain the payday which was combined in a perfect mathematical formula that included $2,500 from MGI, $2,000 in SNORE bonus money and $3,012 for the class victory.

You could definitely say that a Letner winning the McKenzie’s Rage at the River was fitting especially considering the history of the Letner family.

With roots stretching back to the 1940s when Bert Letner developed the Elco Twin head and set multiple land speed records all the way through the NASCAR and off-road career of Danny Letner from the 1950s to the 1980s to the latest generation of Harley Letner and Kory Halopoff, this particular race and the venue had history written all over it.

Members of Dirt Sports Magazine, the third-generation Letner drivers obviously leave an imprint when they compete, as evidenced by the payday and the final results of the McKenzie’s Rage at the River.

With fearless and aggressive driving skills perfect for any off-road course, the city of Laughlin resulted in an off-road version of a very profitable five-of-kind for the very fast Harley Letner

With a stellar record that includes the overall victory in the 2009 Baja 500, Letner was full-metal throttle and tickled to death about the final results at Laughlin.

“Everything was fine,” Letner, who started last in Class 1 Unlimited and Trophy Trucks because of timing issues. “We started how we drew and I didn’t sign up until the last minute, so I was in the very back. I just drove my butt off.

“We were second overall after the first day. The second day was good. We started on the second row and I got the lead in the second lap. I ended up beating everyone by five or six minutes.”

A 33-year-old native of Irvine, Calif., Letner works on race cars for a living.

“I prep my own car,” he said. “I love the sport of off-road racing. I guess you can say I was born into it.”

Letner said he loved the course and toured the layout behind a 454-cubic inch Chevrolet, which is a popular engine in off-road racing nowadays.”

“The biggest challenge was getting around all of the cars,” he said. “I just ran up on the other drivers quickly and got around them.”

Letner said he will remain busy throughout the 2017 season.

Here is a shot of Harley picking up the check for $7,500 for the win at SNORE Laughlin