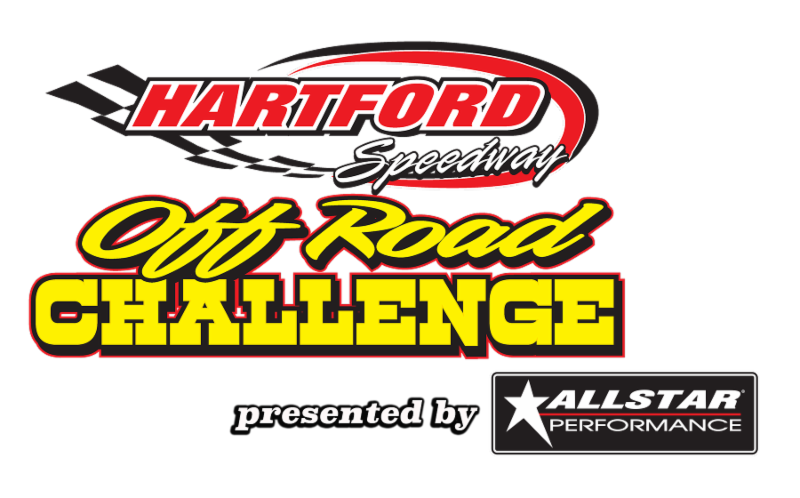 The two-evening event will feature three divisions of trucks; Super 4x4, Super Truck, and Super Stock Truck as well Super Buggy and 1600 Buggy. Competitors from seven states as well as Canada will make to trek to reintroduce Short-Course Off-Road Racing to southwest Michigan.

"Hartford Speedway was looking to bring additional forms of motorsports to our 2016 schedule and off-road truck racing is a perfect fit for our facility and fans," noted track owner Tim Dibble. "What makes racing event unique is that it's all in front of the spectators and the ticket is all access. There's been an incredible about of "buzz" surrounding this two-day event as local businesses like Puhrman Excavating have added support to the race." 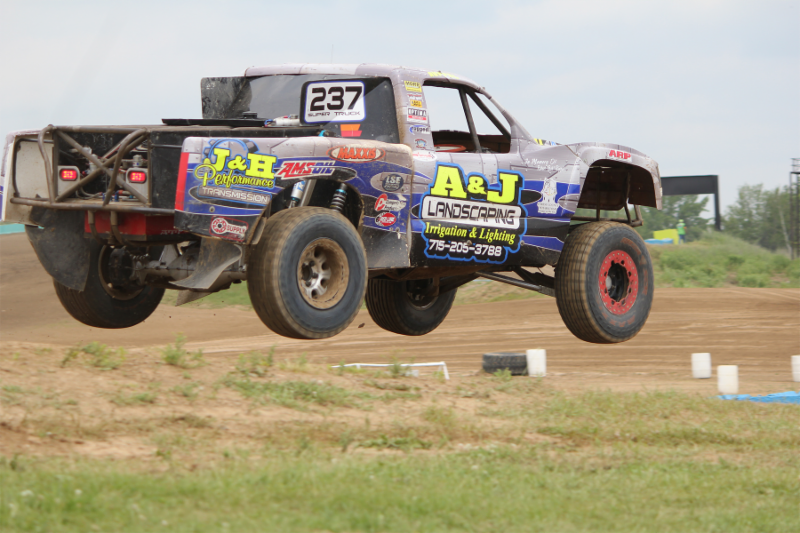 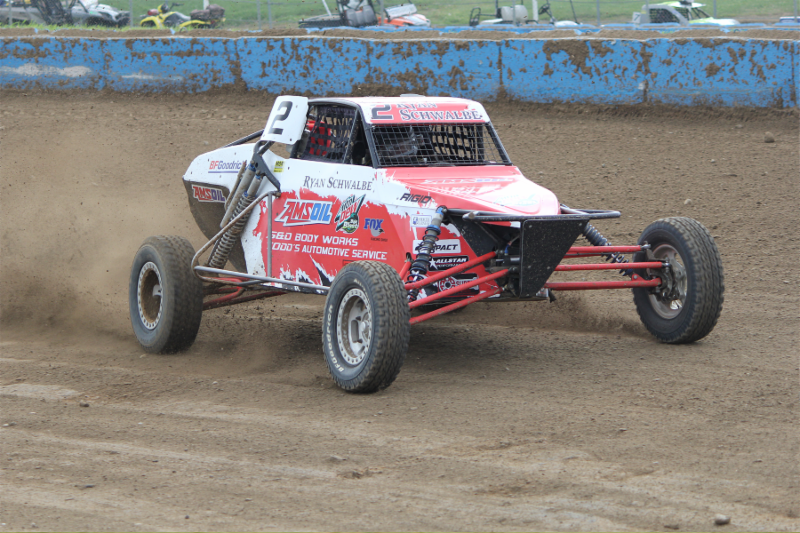 Midwest Off-Road Racing is a group of 140 off-road competitors that compete in Illinois, Wisconsin and Minnesota andunderstands the importance of finding new venues.

" MORR is not just about racing," comments MORR, vice-president Don Demeny. "Our group understands the importance of supporting the community, the best way to say

thanks to the track beyond creating a great show for the fans, is to spend money at local businesses. We have two facilities that have hosted off-road races for over 40 years and we think Hartford is the start of something really big!" 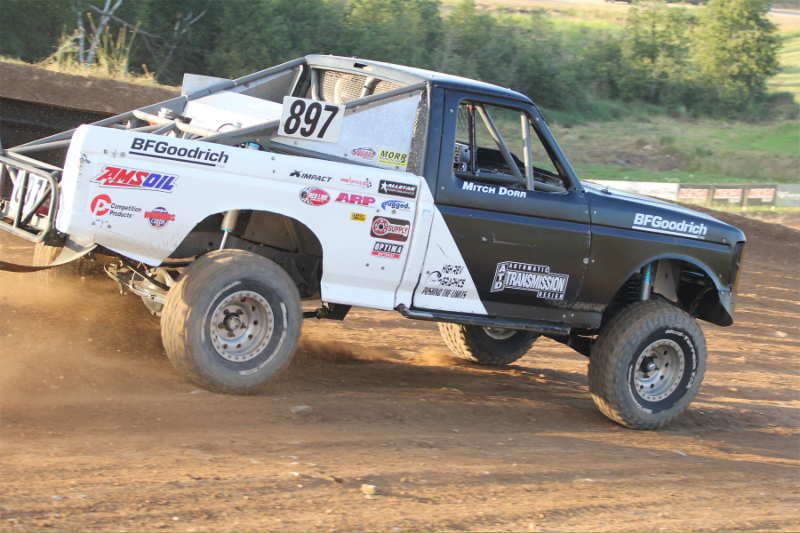 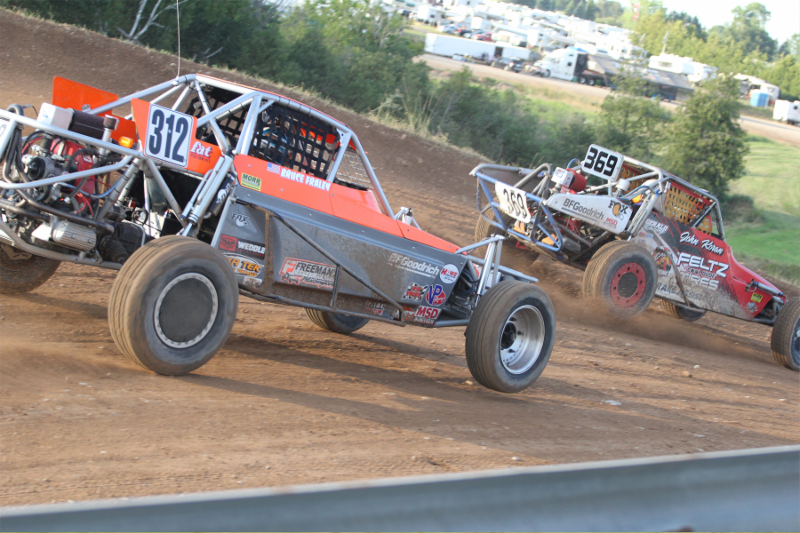 The Hartford Off-Road Challenge presented by Allstar Performance at Hartford Speedway in Hartford, Michigan opens the gates both evenings at 5:00pm as racing starts at 7:30pm.

Finish Money defined: Finish the race on the lead lap and you will receive half of your entry fee. If a racer finishes both nights, the racer will get the entire entry fee returned!! (ex. $250 entry fee, $125 will be returned if you finish on the lead lap each night.) 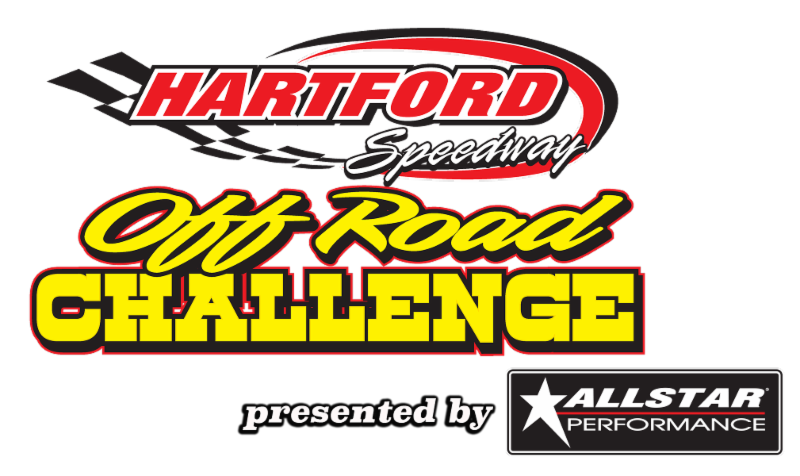 The .6-mile long track featured two main straightaway jumps, the Allstar Performance whoop section, a 15-foot drop section aptly named Puhrman's Pit after the track builder, and two additional infield jumps that kept drivers "up on the wheel" and spectators on their feet.

The two evening program featured MORR (Midwest Off-Road Racing) drivers from the following divisions; 1600 Buggy, Super Buggy, Super Stock Truck, Super 4x4 and Super Truck. In all forty drivers from five states and one Canadian province were in attendance. This created a solid field of trucks and buggies for the many first time spectators of short-course off-road racing.

The Friday program was under a severe threat of rain and to ensure everyone had the opportunity to race, each main feature was a twenty-five-lap event. 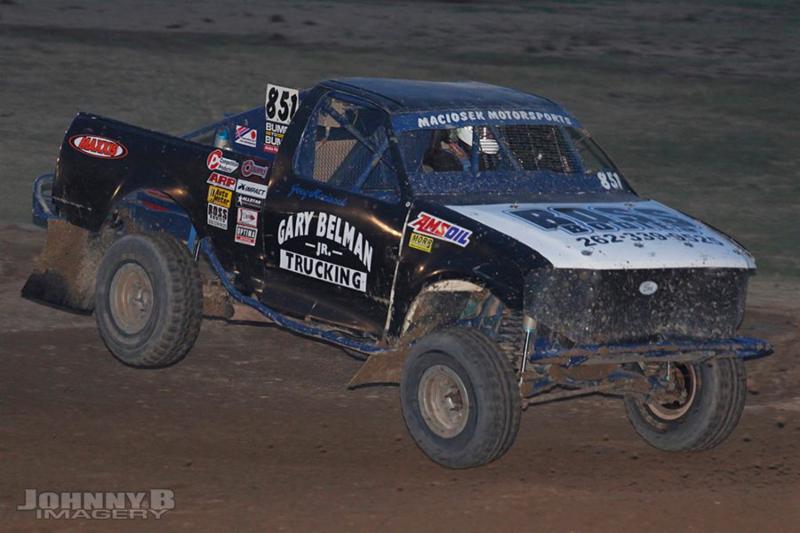 The first group was Super Buggy as Chris Haenlein jumped out to an early lead with Herman Barnum in second as Ryan Schwalbe and Steve Krieman battled over third. Late in the race Haenlein pulled off with steering issues as late charges by Schwalbe and Krieman saw the two racers take the two top spots on the podium with Barnum taking third.

The combined Super Truck/Super 4x4 race was next with a total of eight trucks. Early on it looked like Cody Conrad would take the win until a broken axle put the young driver on the sideline. Eric Ruppel came from the back row to take the win as Kevin Hanegraaf held off Randy Rundhaug for second place. Meanwhile Dan Baudoux cruised to a Super 4x4 win with Alex DeWitt taking second.

The final race of the night was 1600 Buggy. The start saw Jeff Villemure grabbed the lead on the opening lap and never was challenged for the win. Behind the winner, there was quite a bit of passing, but in the end it was Green Bay's Rob Kinner taking second with Bruce Fraley finishing third.

Then just as the checkered flag was waved the rain began to fall, in fact the track received over three inches of precipitation throughout the night. Fortunately the sun came out the next morning and by race time the race surface was perfect.

The Saturday evening program began with each class running a seven lap heat race to determine the starting order for the fifteen lap main feature. 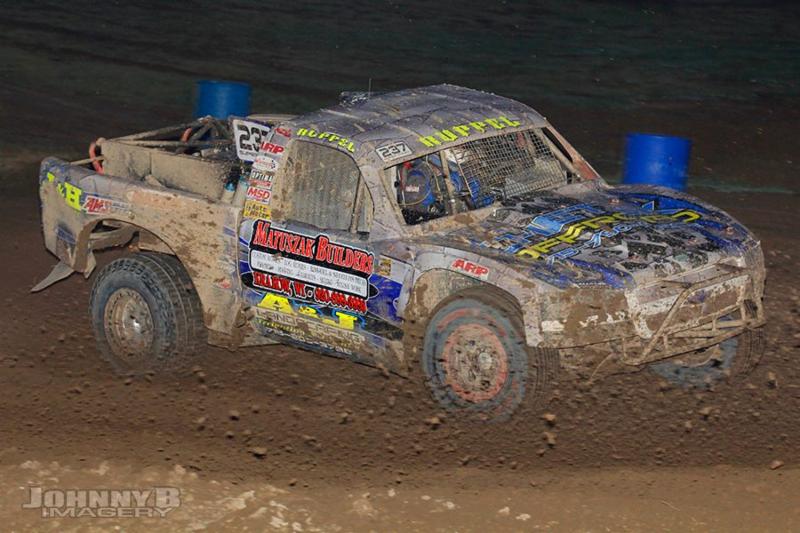 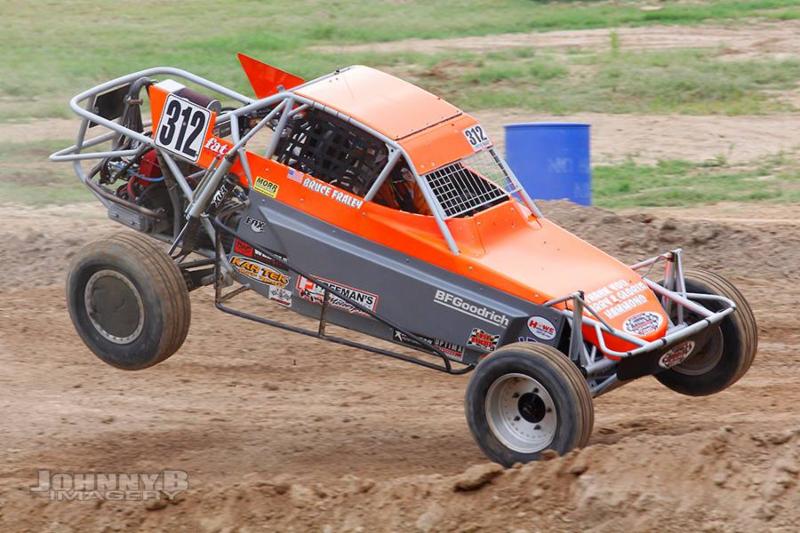 The heat races went quick and without any incident. Then after a twenty-minute intermission the main features lined up for the final dash for the cash. By the way the racers and the fans really enjoyed the quick heat races.

The Super Buggy main had Chris Haenlein lead flag to flag with Ryan Schwalbe taking second and Herman Barnum having another strong race finishing in third. When all tallied this gave Schwalbe his first career win with Barnum heading home with a career best second place Super Buggy finish taking, and thanks to Saturday's win, Haenlein completed the podium.

The Super Truck/Super 4x4 main feature race saw another come from behind win for Eric Ruppel as Dan Baudoux also won for the second time as well. The battle for the finals spots on the podium saw another great race between Hanegraaf and Rundhaug. This time it was Rundhaug that took second with Hanegraaf finishing third. Overall this put Ruppel first, Rundhaug second, and Hanegraaf third. 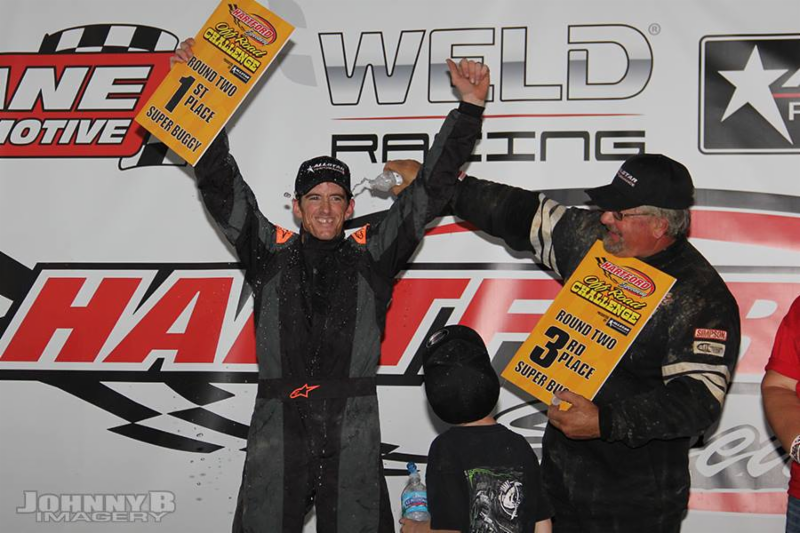 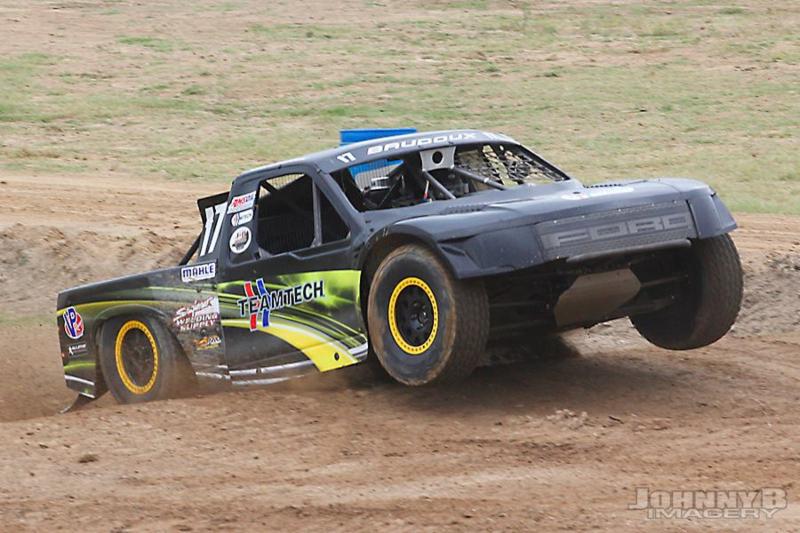 The hard charging Super Stock Truck division saw another great battle between Mitch Dorr and Joey Maciocek. This round Maciocek saved the best for last, as Dorr couldn't find the right move to challenge the Wisconsin racer. Kenny Platten finished the night with another third place finish. This was also the overall finishing order for the weekend.

The final race of the weekend saw another great wheel-to-wheel battle. A determined Bruce Fraley found his way around Jeff Villemure to take the win. At the same time Dave Luger and Rob Kinner were pressing for the second spot. When the checkered flag waved Fraley took the win with Villemure trailing in second with Luger completing the podium.

Overall the racers raved about the weekend. The facility is top notch. The track was challenging and quick without tearing up equipment. The racing went smooth without incident. The new found fan base can't wait for the MORR group to come back with their exciting brand of short-course off-road racing.

Overall cash payback was $19,875 plus the MORR Contingency Plan. Special thanks goes out to the tech and race officials, the track crew, Allstar Performance and especially Tim and Leah Dibble of Hartford Speedway for making this first time event a success. 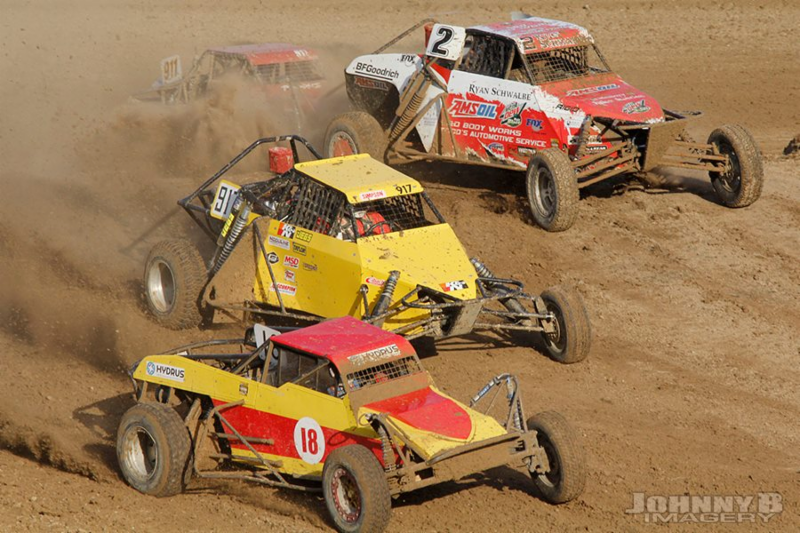 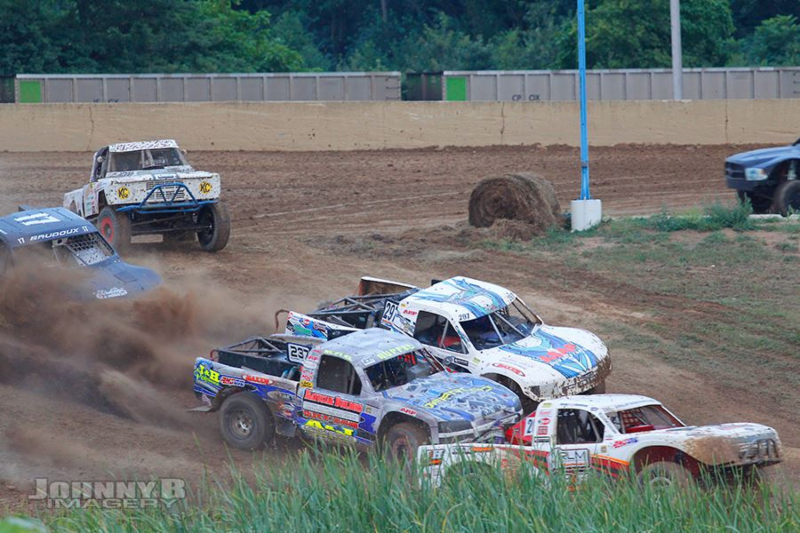 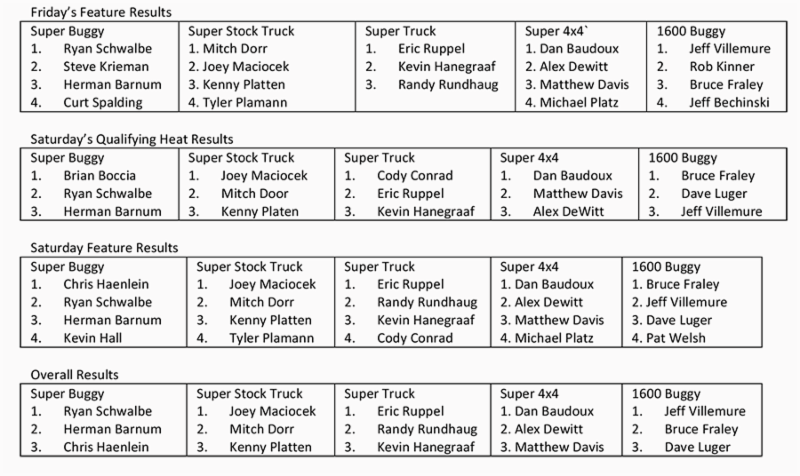