Have you seen the Dirt Kings mag cover?

Again, I would like to reiterate. The advertisers are not the enemies here. I got the skinny on how this works, and TRUST ME, they had no idea that the magazine cover would end up like that. They are getting heat and are not happy about how this issue is portraying our community. They will do the right thing so please, continue to support them as they continue to support us. Thank you.
www.daileyengineering.com
www.hondaoff-road.com

Silver linings...I have said this time and again in other places, in the grand scheme of desert racing I am a nobody. Have never raced a day in my life. Not affiliated with any team, no cool connections, etc. Have just been a fan for the last 30 years. From that vantage point, I've watched the sport change for three decades. I miss the old days when you could pick up a course map at tech, drive out ANYWHERE on the course, pick a spot, and camp out and enjoy the race the next day. Some of my fondest childhood memories stem from those experiences.

In those 30 years, I personally don't recall a time in which people within the community were more united and focused on the big picture. There has ALWAYS been a healthy dose of the "damn the greenies" and all of that. Never much action, but plenty of agreement on who the "enemy" was. Over the last 12 months I think the silver lining in everything that's happened is this is the most actively passionate I've seen the off road community. Not just verbally passionate, but ACTIVELY passionate.

From raising money to policing our own, the tide is slowly turning. Maybe in the long run it's too late, I don't know. But in a corny way, it seriously warms my heart a little to see so many people not just saying they're unhappy with situations, but actively working to change them in a positive way.
TaxPayer Funded Racing
http://www.facebook.com/username#!/TPFRacing

The advertisers getting duped is obvious. The real problem will be the ones that continue to advertise.

Like Pat said, let them know how you feel but be respectful.
Overkill is Underrated.
Durka Durka Photo -

pdailey said:
Again, I would like to reiterate. The advertisers are not the enemies here.
Click to expand...

Im not mad at any advertisers. I'm just pissed a "for profit venture" is working against (even indirectly) our "non profit venture".
If laughter is the best medicine, I am part of its corrupt pharmaceutical lobby
UNDERGROUND R.A.DESIGNS ORANGE ARMY SOLDIER LEMONS RACER CAMBURG FAST-aid WTAR

JRod said:
Got you taken care of Marty!

For comparison, this is a classy magazine cover that represents what the classy off-roaders are really about!

Can't wait to read the article - Thanks Marty! 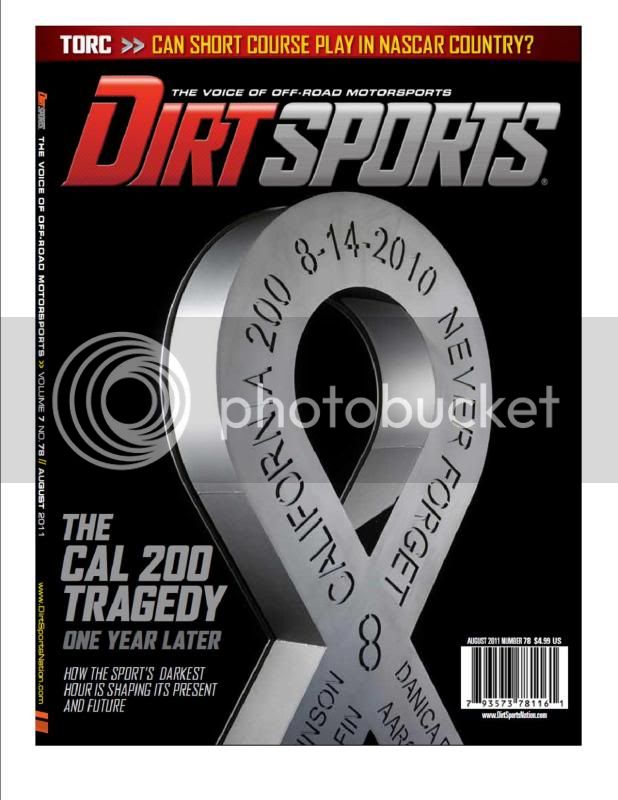 Might need three of those. One to frame on the wall, one to read, and one to leave someone for someone else to read.
BRAT Motorsports - #936
BOR Staff Member
www.bor-racing.org

So I see this has caused a huge stir, and it should. I am disappointed to say the least.

I made a phone call to see if one of the SI higher ups was aware of the uproar. I sent an email with some links. My phone has rang, and one of them was the main guy in charge of the magazine.

He immediately tried to sell me on the reason behind the cover and after 1.5 sentences I stopped him simply by saying, "If you are trying to sell me on it, you will fail."

We had a good talk and he "fully gets it" now.

Not sure how that will come out in an end result, but he does understand WHY the community is upset.

I'm sorry this had to happen. There are so many better things to be talking about

The other calls were a couple SI staff that are just as disappointed... As with the advertisers, don't wrap them all in...

Slap in the face?! This is a magazine of some people having some fun. We're sorry that we don't conform to what you want to see. We suggest perhaps only buying three out of the next six issues if you hate it--that'll teach us a lesson.

This is one of the thing's I could find that was posted by "Dirt Kings magazine" on their facebook that wasn't deleted, there were many more but they are all gone


Anyone know if you can return a mag to the supermarket? I DID NOT look at it, just saw the name and bought it cause I had heard about it in the past from Jordan, now I want to return it. Not for the $6, but to let the store know its junk
I'll keep my Guns, Freedom & Money, YOU can keep the "change".

The periodical world is very unforgiving...poor decisions are not taken lightly
Not just an internet racer!!

aiiraciing said:
Anyone know if you can return a mag to the supermarket? I DID NOT look at it, just saw the name and bought it cause I had heard about it in the past from Jordan, now I want to return it. Not for the $6, but to let the store know its junk
Click to expand...

organize a magazine burning. its not the stores fault you bought it. i cant return a swank if i do not like the issue. suck it up to a lesson learned

Will remain skeptical about how much they "fully get it" now. There was a lengthy discussion elsewhere long before this first issue materialized during which many expressed concerns to the same person you spoke to about how the magazine was being marketed before it even went to publication. The "lifestyle" of guns, sluts, and the overall DGAF attitude.

There is no doubt in my mind that that person fully knew what he was doing and didn't care and is only paying lip service now to stem the tide. The Facebook comments reflect the real attitude in my opinion. There is little they can do at this point to convince me that they intend to change anything about what they are trying to accomplish.
TaxPayer Funded Racing
http://www.facebook.com/username#!/TPFRacing

Just hurt them in the pocket book. Problem solved.
WWW.TEMPTMEDIAFILMS.COM

I LOVE this idea - but instead of buying them, I think they should give them to us.

Stay tuned... Some postive things are happening and there has been communication with some players involved both at the publishing and advertising level.
www.fast-aid.org WTAR
​

Here is my response to the magazine before it came out

"I don't want to speak on behalf of Dirt Alliance but that verbiage is what the new "Dirt Kings" ad says in the new Offroad Magazine. I was turned off by it as well when I saw that printed in the Offroad magazine. I would think a publication that produces other great magazines would not promote it in that way. However here in AZ the stands are empty for the Lucas Oil Regional races, then the next weekend there are a thousand younger people that show up to the "Glamis Status" events at Speedworld. I have never been and never plan on going. Not that Im getting down on people who enjoy it, but its just not for me and shows there is a big market for that kind of stuff. I am part of Dirt Alliance as a racer that is looking to promote myself and the company in a positive light. I work hard at racing, involve myself in charities,support Clean-dezert,Fast-aid,make a wish. We are bringing my truck to a Father's Day car show at Radiant Church in Surprise this weekend. I volunteer at races, teach people not in the know how to preserve our deserts and keep them clean for future generations . The desert is a big part of my life and always has been. As I get older and older of course grown up life gets in the way and need to focus on more important things. I give my word I will do whatever I can to portray offroad racing in all its glory and show people we are respectful, mature , people who care not only for racing but the desert as a whole. That being said.....lets have some fun. The first 10 people to PM me will get a team shirt. Let me know your size and address. Thanks and I hope everyone gives Dirt Alliance a chance!!"


Bottom line is" Source Interlink Media" is responsible , They can pass the buck down the chain as far as they want but they are ultimately responsible for the content of their publications. They know there is a huge market for this 'BRO" crap. You can deny and point fingers all you want but it is what it is. Just like I said above we get maybe 50 people come and watch our Lucas Oil Regional races then the next night 3000 people show up for the "Glamis Status Party" http://www.glamisstatus.com/ to underage drink, look at titties, and generally screw around. Why has nobody cried foul on Speedworld and boycott them for promoting this ? I am in no way condoning this mag but just like everything else people talk the good talk but do nothing about it. You guys will defend Jesse Jones/Fox, KC lights because you know them or are friends. Other than a few none of us knew we were going to be in this magazine and to what extent. Dan Vance is two pages behind me in the Mag and pretty sure it was a Total Chaos thing that he knew nothing about, just part of his sponsorship.Total Chaos probably got pitched early on before much of the content of the mag was prepared.... who knows. Again blame Source Interlink Media first then work your way down. I'm sure their other 8 truck magazines share some editors,designers, sales people, ect

When I was a kid skating was not the cool thing to do. I loved it! got popular and I got old. It lost its appeal to me. Still like to watch it

I rode moto before it was cool thing to do. Got popular and squids in bro trucks took over the tracks. Got old, injuries. Still like to watch

They banned me from thier facebook page lol
WWW.TEMPTMEDIAFILMS.COM

pdailey said:
Welcome to the club. Haha
Click to expand...

Its ok. Im gonna hook them up with a sweet website.
WWW.TEMPTMEDIAFILMS.COM

Never heard of this magazine or knew my company was advertizing there. I cant speak officially for one company on this list but will pass on the feedback from the RDC community to the marketing department.


pdailey said:
Advertisers. There are a lot of respectable companies on this list and I hope they do what's right and not support a rag like this any longer. I have already sent Camburg a text and also know the owner of Bullet Proof Diesel so I am emailing him right now.