Help me ID this vintage buggy...

Help me ID this vintage buggy... maybe a RaceCo? I've had this rail for a few years. Would like to know what it actually is.

Has a fully TIG welded aluminum body. It's really wide at the rear beam, something like +12-15"

Was setup for a Fortin style transaxle.

very few modifications from it's original state or so it appears.

Looks like a Raceco, but front bumper has that upper tube added and the body is definitely not Raceco. If it has the big rear, the car would have used the 29+" torsion bars and been a 9" wider torsion housing with the intermediate spring plates in the back. Probably used some 6"x1.5" rear trailing arms (maybe longer) to go 12"s wider in the rear. Body looks kind of odd. It wasn't one of Minga's movie rental cars, was it?
N

Found a couple more pics with the body on 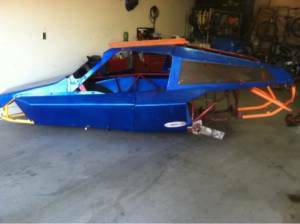 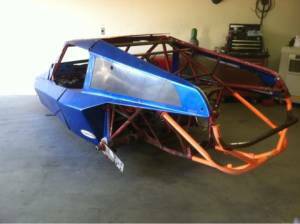 Wow, that's a pretty cool body. I can't say I remember it racing but it sure looks to be a Raceco to me. I'm guessing someone made their own custom body because I have not seen a Raceco with that body before. Where did you get it?
All I want to hear out of you is “speed zone”, “we’re on fire,” and “I got the fat chick.” Zambo
N

Yeah. The body is a really nice piece. All TIG welded aluminum.

I bought it from a guy that got it from Geiser Bros.
B

You know what, I have seen that car before, but the team that had it was using it as a prerunner. Not even a clue as to how long ago it was, but it was a long time ago. I think it might have been with the group that raced the big 2 seat Foddrill car that was in Hot VWs in the late 1980s. YOu know who might know is Carl Perez, because I think some in that group were running Mazda hair dryer motors.
Share:
Facebook Twitter Reddit Pinterest Tumblr WhatsApp Email Share Link
Top