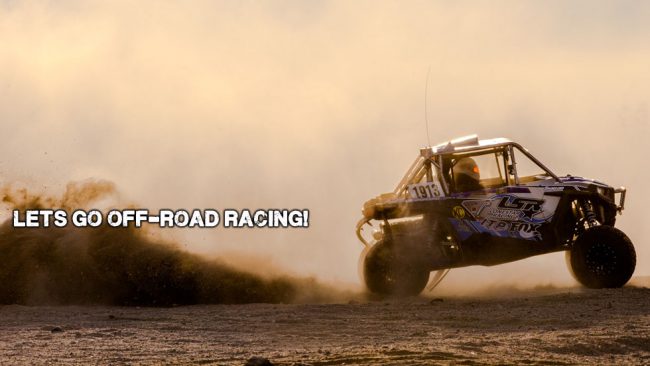 Earlier this year we were asked by Polaris and RedBull to put together a one page graphic article that showed just how easy it is to go racing in the UTV class. Now, we simplified it to make it easy to read and understand and in essence, racing the UTV class is the easiest to get into, but we thought it would be good with the 2016 season approaching to revisit this subject and dive a little deeper into how to go off-road racing in the Pro UTV class ranks.

UTVs are the perfect platform for both novice and experienced off-road racers. For those who already have or are racing, UTVs make for an awesome class to join because of the exposure, sponsor support and competition. For those who are new its great for all of the previously mentioned benefits but nothing makes it easier than for the simple reason of accessibility in purchasing the machine. UTVs are sold all over the world by powersports dealers who sell and finance machines of all styles and sizes. There is no other type of racing vehicle that you can go down to the dealer, pick up a top of the line UTV for around $20k-$25K and then apply some accessories and go battle it out the next day! The WORCS series for example requires very little modification, mainly for safety, while desert racing is a bit more detailed in the things you will need. So while its a lofty statement to say you can be racing the next day, it is totally doable and something many have done over the past couple of years either at WORCS or other local series’. Whats even more crazy, is many are racing on vehicles they have financed!

UTV classes have exploded across all genres of off-road racing, from short-course to desert. There are race series’ spread all over the United States that host classes for UTVs to compete in. For the sake of making this article simple we will focus on what it takes to go racing in both the desert at the Best In The Desert (BITD) series and short-course at the WORCS series. BITD is the number one UTV desert racing series right now in the world. Entries hover around 40 machines per race with some races like the UTV World Championship and Mint garnering well over 50! WORCS is the number one short-course / production style racing series and their car counts can approach closer to 100 machines spread across numerous UTV classes. Both series cater to the UTV crowd and both series offer solid competition. 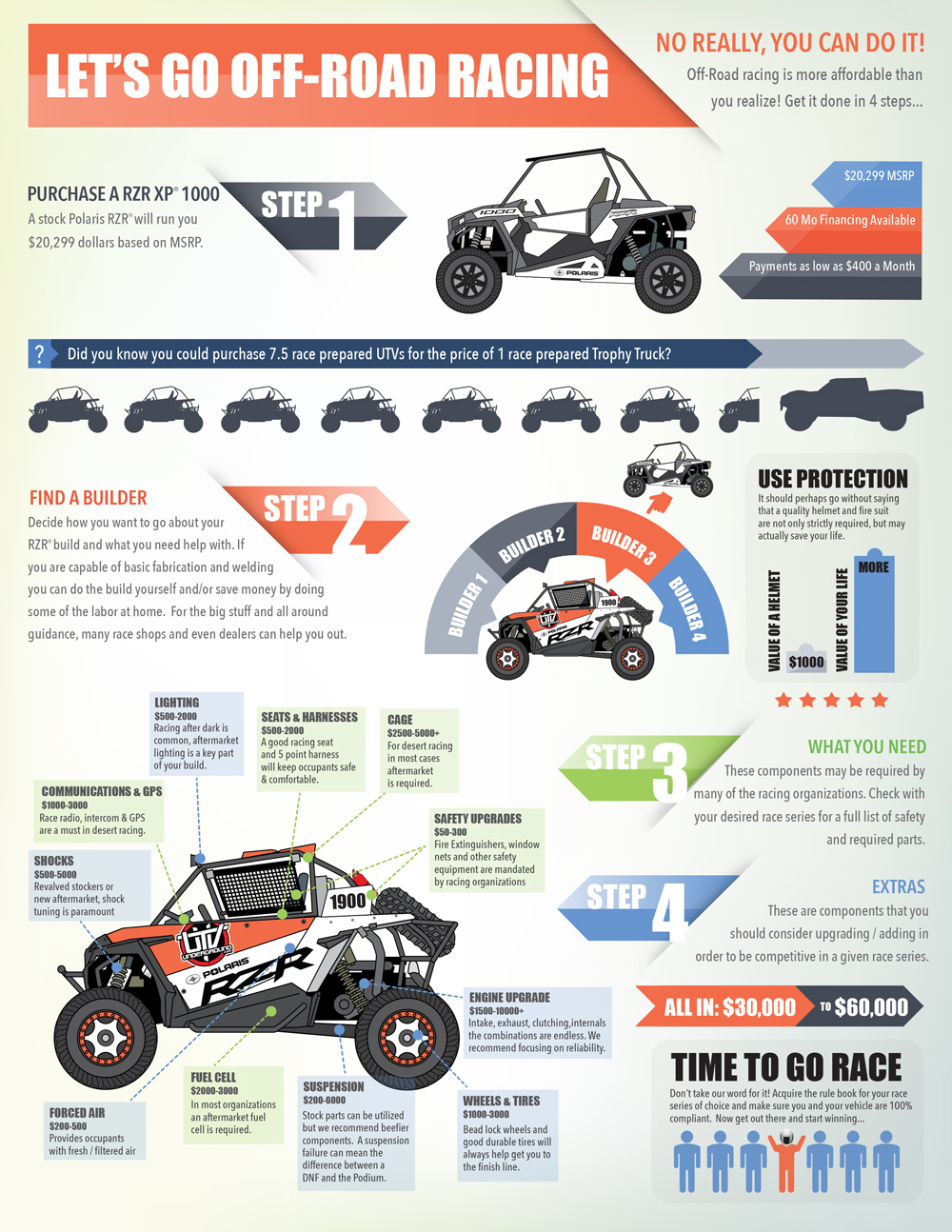 WHAT TYPE OF RACING IS THE BEST FOR ME?
Thats a question we hear all the time and its not always easy to answer but we break it down like this. Desert Racing is the premier form of UTV racing. It has the most exposure and sponsor potential while garnering the most attention from both media and OEMs. The competition is stiff and to play with the best you have to spend the time and money to put together a worthy team and vehicle. Sure, you can build a race ready BITD UTV for between $40k-$50K (including cost of machine) but the top teams are spending well into the $70K range on their machines plus sporting some of the best team and pit support there is. Desert Racing is exciting, the races take many hours to complete and the challenge always is what keeps people coming back. But again, it is not cheap and it is not easy. Many have showed up with a top of the line built machine and quickly realized that they are way off the pace, way underprepared and way in over their head so we always suggest that you join up with an existing team for a few races to learn the ropes and see all that goes into operating a successful and competitive desert program. If you think that the you and a couple of buddies can just show up and run down Jagged X or The Murray Brothers, you most likely will be let down. So again, take some time and learn the ins and outs to running and competing in the desert. It can save you a lot of money and headache in the long run!


Short-course / production style racing like you have at the WORCS series is much more attainable for the newbie. You can build a competitive race ready machine for between $20k-$40K (including cost of machine) depending on the class you wish to run. Whats great about WORCS is they have classes that start at the 600cc range all the way up to the Pro Turbo class with everything in between so there really is a class for every level of age, experience and budget. Seat time varies at WORCS, a typical race lasts about 45 minutes but you do have a practice session and if you have the resources you can race multiple vehicles in separate classes. WORCS is a great series to get your feet wet in to see how you like UTV racing. It takes minor modifications for safety which leaves you room to build your machine up with mods over time. Unlike desert racing, you don’t need to modify your fuel system or chassis to compete which keeps costs down and keeps your vehicle light and simple. Many who race WORCS still use their race machines for recreation whereas a desert machine becomes a “one trick pony” due to all of the mods you need to make. Many racers compete at WORCS, learn the ropes of racing, build up their experience and seat time then move up to the desert racing ranks. Others simply remain at WORCS and move up through the ranks of classes all while competing amongst some of the fastest UTV drivers in the world.


In the end, you have to decide whats best for you and your budget. With a good plan and some good resources you can come out as a rookie and do well, we have seen rookies win races at both desert and short course events, it is possible and thats another reason why UTV racing is so awesome!

WHICH UTV WOULD BE BEST FOR ME TO GO RACING WITH?
We always dread that question because there is no right or wrong answer. If you go to any UTV race series across the world then without a doubt you would see the Polaris RZR platform is the most popular platform for racing. But that doesn’t mean its the right machine for you and your goals. Both Can-Am and Arctic Cat make very competitive and race winning machines and now that Yamaha has stepped up with the YXZ1000R we’re sure there are race series’ where that machine can and will accel. Over the years racers have leaned towards the RZR platform for many reasons. Its a solid out of the box machine, there are factory parts available through the vast dealer network, the aftermarket is deep with products made for racing the RZR and frankly, its just a bad-ass machine to go racing in due to its power to weight ratio and its suspension. The RZR is the most winningest platform on the market across the board and thats the bottom line. So why wouldn’t you want to race a RZR? Well, maybe you want to stand out, maybe you feel that the Maverick or Wildcat gives you an advantage, maybe you’re more comfortable in the other platforms. Reality is, you can win in any of these machines so selecting whats best for you is really up to you and no one else!