I too had a great time, no problems going in through TJ and no problems going out through Mexicali. San Felipe was friendly as always and all the locals we encountered were friendly and accomodating. Unfortunately some hot head A-hole with a certain stock full team decided to sucker punch my buddy around RM310 which really put a damper and ruined the vibe for the rest of the race for myself and the guys I was with. Other than that one A-hole all was great and I look forward to next year.

i crossed tijuana around 11pm, and went straight to the taco stands in ensenada around midnight or 1 am, not a single problem all weekend

so everybody get your butts back to baja the year went without incidents, baja aint the same without the big red and m

Uneventfull. I am just starting work on my film about offroading in Baja. I spend alot of time in Baja but mostly southern Baja. I was a bit reluctant about spending so much time in the north. I slept in my truck in the parking lot across the street from the start finish on thursday and friday. No problems. I gave a fifty spot to a private security guard who said he would watch over things and he did. There was one motorhome that was parked in the alley behind the main drag and it got hit in the rear corner and didn't look too good. I bet if i slept in my truck in downtown Detroit for two nights the outcome wouldn't have been as good.

My friends and I talk alot of s&*t about the north but Ensenada proved me wrong. Except for the Das Club lady everybody was super cool and generally stoked on the race being in town.

CB
When in doubt, paddle out.

One bad thing happened we had our small cooler stolen off the trailer while gathering everything before we headed to ojos to spectate. The worst part is that i had just filled it with beer from the large cooler to take in the motorhome. Small price to pay for such a good time.
M

Best organized 1000 i've been to. Except for the ******** highway patrol taxing dump cans on hwy 2, everything was great! good job Sal!
4 Championships in 4 years!- Winningest Driver of 2010- Dirtsports 2010 Desert Driver of the Year-BFGoodrich Contract Racer- FOX's Guinea Pig- THE RACE GODS LOVE ME!
A

Can't wait for next year! No problems!

Incredible time even with Fullpull filming me at the border crossing...RDC limited edition la familia hat and all.


the pissing water out my ass for 4 days following that were not so fun.

I chased 700 miles, had lots of fun, slept in 32 degree valle t, and came to the finish as the truck arrived in first place..

I went down a bit hesitant but it was a flawless week.
Last edited by a moderator: Jan 22, 2014
Kris
www.shockseals.com

i had a great experience. i was sitting in front of mcdonalds on wed. night waiting for our truck to arrive. it was around midnite.there was'nt any traffic and it was real quiet in town. i got out of the truck to get something out of the other side of the rig. one of those piick-up cop rigs pulls along side very slowly, checking me out. they stop up the street and backed up to where i'm parked. they stopped. politely asked who i was and if i owned my truck. i volunteered my id and registration. they quickly checked it out, thanked me for my time and wished me good luck in the race and left. that was a first for me. i'm glad they checked. i felt like they were there for the racers. we had no issues at all. great time.
2011 and 2012 SCORE class points champions.....

I wont lie I was a little scared when on the high way from tj to rosarito , but every thing went perfectly fine , the truck I was waiting for in race mile 509 never made it but we had a great weekend at the coast in erendira .

this was our small pit stop ,but the truck broke down in race mile 250. 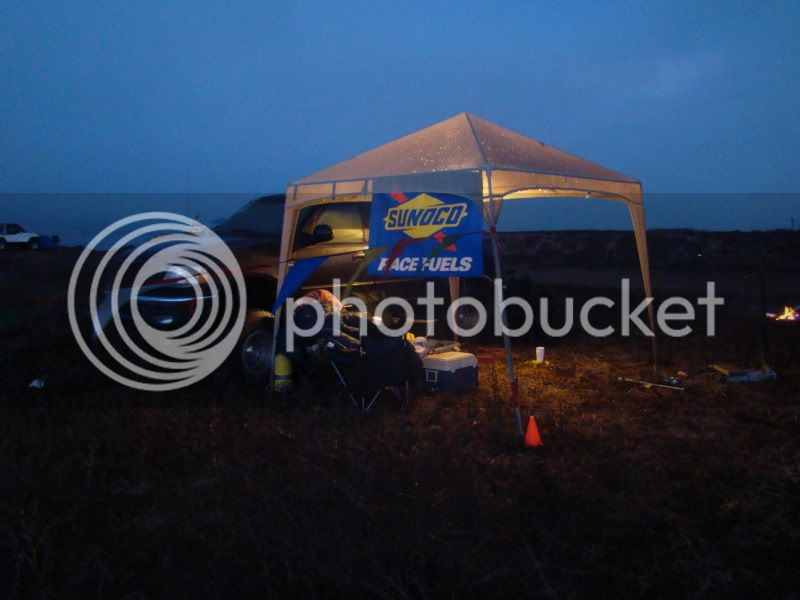 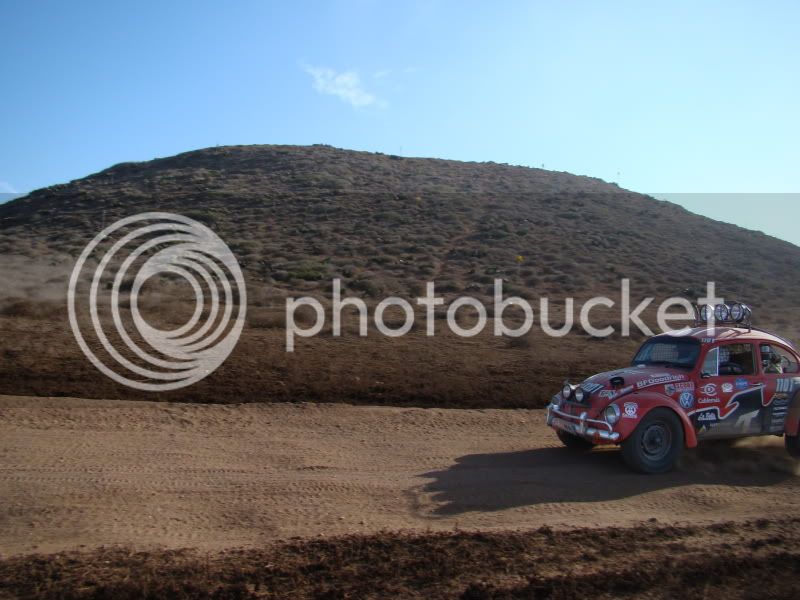 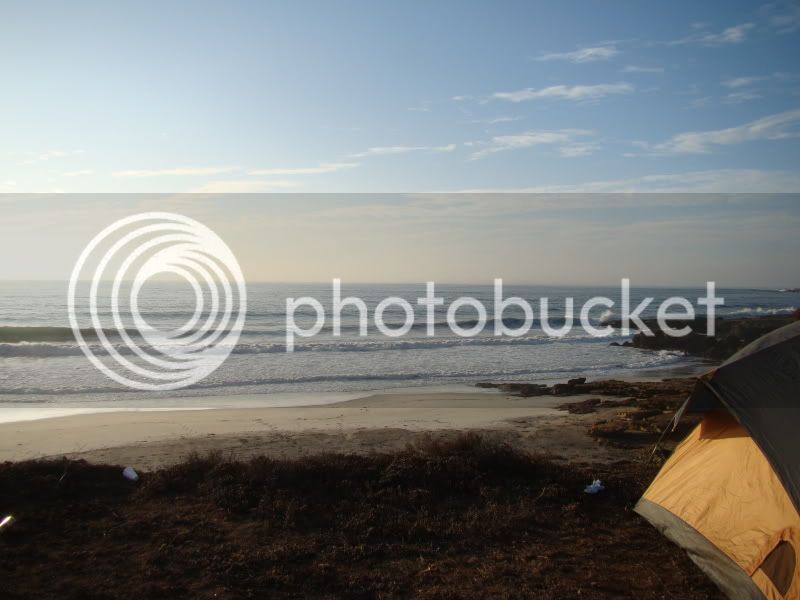 Epic, insane, beautiful, after forty years the "race" has another chapter. Seven days prior to Friday's race day start I was leaving Chicago with my race Blazer in the back of a 26' International Penske headed for El Cajon. The truck had been prepped just outside of Chicago in the shop of Probst Racing in New Lenox. I had been fortunate to work side by side with Jon Probst. Jon has been a good student of his father and uncle, two of the best short course drivers and fabricators that have come out of the Midwest. Our real challenge was self induced because of my insistence on modifying my drive line. We have had problems spitting front drive shafts intermittently for years. Last year's 1000 had me losing one on the pavement and another at rm 200. The car ended up breaking a t-400 case in half at rm 990, but the driveshafts were still good. Working with one of my crew members, we made a spacer to move the transfer case back further in the frame to get a longer front drive shaft with better driveline angularity. Rusty at TCS built a 300m shaft that I combined with a standard 32 splined sleeve that would slip over the output shaft off the back of the trans on one end and on the other was the unusual 10 spline male that goes into the Quadra-trac transfer case. We didn't get the shaft before I left Chicago, but I had to wait until late Monday before it arrived. Fortunately everything went together well, but we still didn't cross the border in TJ, going solo with the dually and the race car, until 3:00 a.m.Thursday morning. We weren't stopping for anything until we got to Ensenada.
Registration went pretty quickly and likewise contingency. The crowds were good, we had a blast. We hand out ribbons of little round decals. They are the size of a fifty cent piece that has a picture of Tito the Tomato, a left over from our relationship with the California Tomato Commission. We have rolls of them. 8-10 decals at a time.
Three turns into the race, not even in the wash, I round a ninety onto the last short straight heading into the wash, when boom, a shudder and banging, then metal sliding across the pavement. I pulled to a stop with crazy, gut wrenching, questions was all the work for nothing. I"m f'd. I jumped out of the car climbing under the side, looking across towards front right wheel, expecting to see nothing but tire. Instead the front driveshaft is still in its place. I don't see anything obvious, now I thinking I'm really screwed and I stand up. As I turn around I am greeted by a local with my spare front axle, that is normally mounted on the inside of the frame rail for emergency use. I grabbed a couple of zip ties, did the first two and handed a handful to the locals. I was belted and outa there pretty quickly. I came out behind a 1450 style Ranger in Sportsman Class. I was on his bumper in a quarter of a block and followed him into the wash. Now there is no earthly reason that the Ranger guy should know that some one was going to be on his bumper in the first thirty seconds of his race, so he followed the existing tracks into the wash and I cut inside of him with six hundred horsepower and all wheel drive. We passed a couple more before hitting the last straight on to the dirt at 90+. Shortly after I passed the eventual winner, Darren Skilton, scrambling to get back up onto the road. I squeezed to get in front of him and a big ass D-6 Cat. I thought of how lucky it would be to go off right next to a Cat. Later I had passed all the guys that had passed me when I was down and by Ojos I passed the Bronco of Scott Wooten that had started behind me. The car was really working well. Around rm 80 I had one of my front lights fly up onto my hood for a moment. I could see it swinging from time to time, but I didn't want to get out of the car again, so I decided to wait for a spectator. It wasn't for another ten or fifteen miles that I came across the next spectator. I round a corner and I see Brendan Gaughn. Brendan and I have a history. I met him originally when he was driving for Walker Evans and I was doing their helmet and air systems. Under similar circumstances a few years ago, I came across Brendan as they were starting to winch his buggy back onto the road. So here it is again with Brendan. I figure if I am going to help someone, it might as well be him and I towed his buggy off the race line. Later I found out later his rear bearing had eaten itself and the spindle was junk. Skilton re passes me but I feel pretty good about my pace. The next miles through La Roumarosa were outstanding, but after that into the sunset was some of the nastiest dust I have ever come across. Waves of locals driving on the track. It was that way from my stop at the BFG pit at rm 147 until I broke at rm 161.
I thank all those who put on the race and for all the help I received along the way. Viva Baja!

The Beast said:
I wont lie I was a little scared when on the high way from tj to rosarito , but every thing went perfectly fine , the truck I was waiting for in race mile 509 never made it but we had a great weekend at the coast in erendira .

this was our small pit stop ,but the truck broke down in race mile 250.

great pics ,we stayed in the houses just to north of you guys.erindira is an awesome spot to watch the race from!you guys had a good lookin pit sorry about the bad luck.
You must log in or register to reply here.
Share:
Facebook Twitter Reddit Pinterest Tumblr WhatsApp Email Link
Top