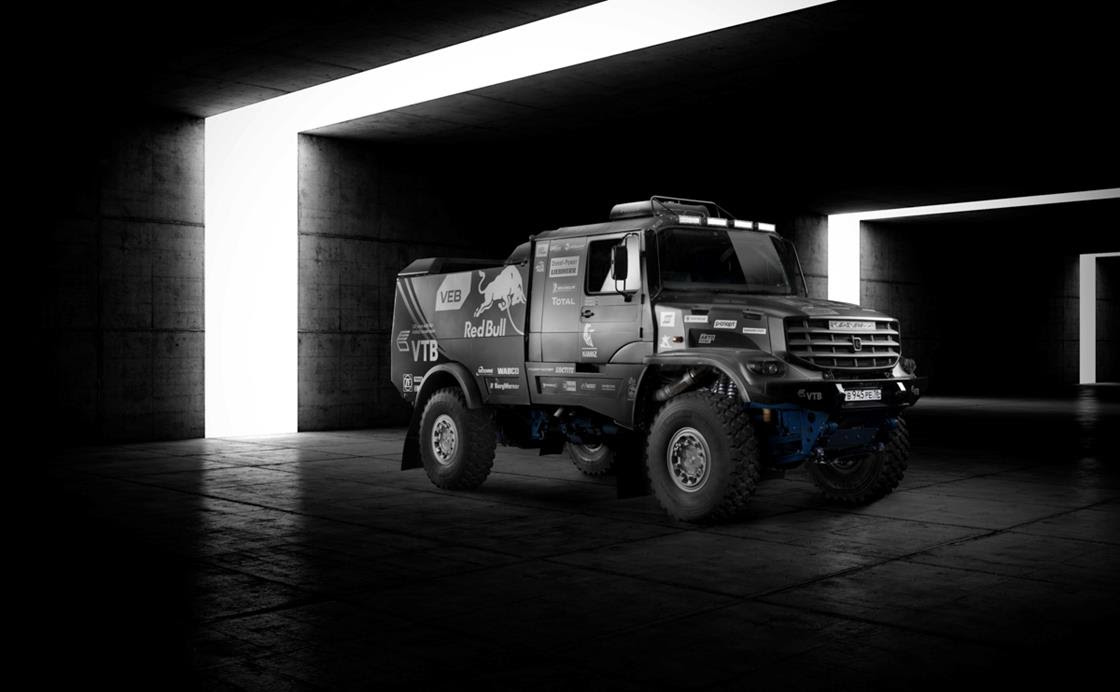 Russian truck legend Kamaz has unveiled the truck that it hopes will take the Red Bull-backed squad to a remarkable 14th victory on the Dakar Rally next year, which runs through some of the most inhospitable terrain in South America.

Before making the trip across the Atlantic, the new truck in stunning monochrome will make it's first international appearance in the upcoming Silk Way Rally taking place this July. From 8 - 24 July, Team Kamaz will race from Moscow through Kazakhstan to Beijing - covering over 10,000km in 15 stages. The Silk Way Rally will be the team's biggest challenge and best opportunity to test its new weapon before the South American adventure next January.

Unlike the trucks that have gone before it, this latest Kamaz Master, based on the Kamaz-4326 chassis, has a long cab with a prominent bonnet. And this will allow it to stay at the cutting-edge of the technological arms race that characterises the closely fought truck category in the Dakar.

The new truck project was revealed a year ago for the very first time, but it has only recently had its competition debut, at a rally in Russia’s Rally Raid Gold Cup of Kagan. The intervening time has been spent turning it into a winning machine that is capable of taking on the toughest rally in the world, which gets away once more next January.

Giving the new truck its debut in Russia was Eduard Nikolaev: a two-time Dakar winner with Kamaz, who has finished on the podium an additional five times with the Russian marque.

“This is the new vehicle that we built last year but we saw it wasn’t ready for the Dakar Rally yet and decided against taking the risk,” Nikolaev explained. “Naturally, the first thing you notice about this truck is that it looks different. The trucks we already have are all forward control vehicles and don’t have a hood. The main thing we were after in this design was crew comfort. When the crew’s comfortable they drive faster.”

“The 2017 Dakar will be all about speed. There won’t be much cross-country driving and all our vehicles are mostly off-roaders. We had to adjust here and there, because you need a different vehicle configuration for a fast and technical rally like this. So we hope this new truck will help us a great deal.”

Rather than its usual prominent blue and white livery, the new Kamaz ran in Russia with an interim black Red Bull ‘stealth livery’.

Team leader Vladimir Chagin explained: “Throughout our history, our team has always sought to come up with the best, most reliable and competitive trucks, which meet the ever-changing requirements of this fascinating sport. We’re now at the dawn of a new era of race trucks: cab trucks demonstrate a number of technical benefits, and an important goal for us this season is to innovate as much as possible. We’ve got high hopes for our new cab truck, and the stealth Red Bull livery is a visual demonstration of just how much we’re pushing the cutting edge of technology.”

While the truck is brand new, its awesome performance is familiar. The Kamaz Master ‘Kapotnik’, as it’s called, still maintains four wheel drive while a brand new 12.5-litre diesel engine propels its to speeds in excess of 160kph, on more or less any surface.

“The first thing you notice about the new truck is that the ride is smoother for the people in the cab, for the crew,” continued Chagin, “Because whenever we hit a bump or something the shock doesn’t go straight up into the spine as in the cab-over configuration where you’re sitting on top of the axle. Here the shock goes into the engine so the impression you get from this vehicle is that you’re driving in a big SUV, only larger.”

In the belly of the beast is a 1000-litre fuel tank, which enables it to keep going all day – and much of the night. Putting the 980-horsepower on the ground is a 16-speed ZF transmission.

“I really liked it a lot. Eduard Nikolaev and I drove in it on sand and on hard-surface roads. It’s a very promising configuration, quite different from our cab-overs. So now it all boils down to performance, whether it’s going to be faster or not and that will only be clear after we drive it in a real race. So far we’ve been quite pleased with it.“

The upcoming months will be key for the team as they put their new truck to test in every occasion possible. Next up will be the Silk Way Rally starting on 8 July from Moscow.

Make no mistake: the Russians are back.

Download the news cut, interviews and other related media here! 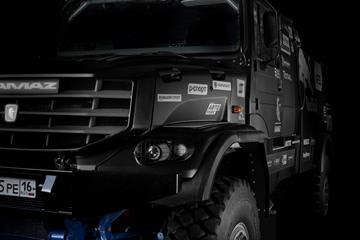 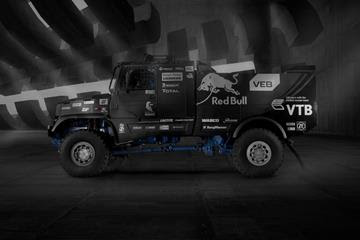 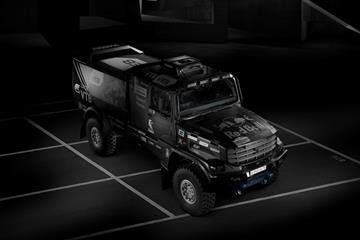 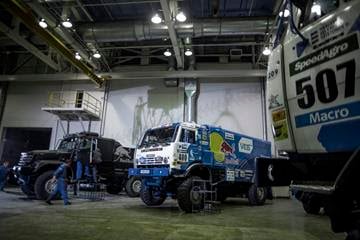 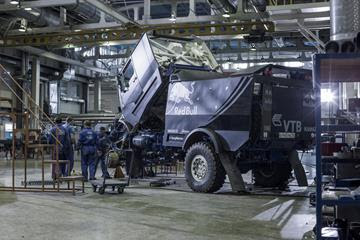 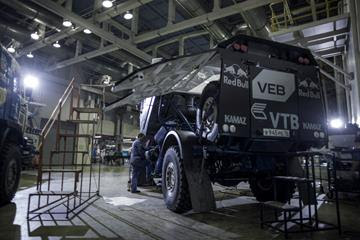 Interesting to see Kamaz following De Rooy rather than leading the innovation in the truck class. Chagin doesn't like to lose though so I'm not that surprised to see them making some changes.

One of the highlights of the trip this year was when Vladimir Chagin took a photo of the RDC 4Runner. He told Klaus that he likes Toyotas (he was in a Land Cruiser) and the Czar of Dakar even posed for a photo with Klaus.

That thing is BAD!
"The strongest reason for the people to retain the right to keep & bear arms is, as a last resort to protect themselves against tyranny in government." Thomas Jefferson

What I would give! 980hp and a metric sheet ton of torque plus that 1000liter fuel capacity!? I'd take it over a TT any day. Turn it into my DD/off grid camper/BO vehicle. These trucks areally just insane.
Nikita Khrushchev said"We can't expect the American People to jump from Capitalism to Communism, but we can assist their elected leaders in giving them small doses of Socialism, until they awaken one day to find that they have Communism. "

The Mammoet team also just revealed a new truck with a hood. A Renault.

I think its a new trend - smaller in size, not as bulky, much faster with better handling. Trucks become oversized T1 vehicles

I don't undertstand how they don't tip over going down dunes and around corners. Those things totally amaze me.

There is NO WAY they should work as good as they do. They have leaf springs, super heavy tires and wheels, and the driver is (well, was...) in front of the front axle. Yet they are still amazingly fast and DGAF what is in front of them. My favorite is when they mix the starting times with the cars and trucks and you can really see how they stack up.

Dirty Harry said:
There is NO WAY they should work as good as they do. They have leaf springs, super heavy tires and wheels, and the driver is (well, was...) in front of the front axle. Yet they are still amazingly fast and DGAF what is in front of them. My favorite is when they mix the starting times with the cars and trucks and you can really see how they stack up.
Click to expand...

I'm sure there's weight restrictions, but is there a minimum size these trucks have to be? Dumb question probably, but Could you build a heavy 4wd TT with a giant tank and 40" tires and be legal for the class?

Would love to see Freightliner, Peterbuilt, or Kenworth build one of these with a Cummins power plant

No, you can't. FIA regulations say:

..."Only local modifications of the chassis frame are permitted in order
to comply with the safety requirements described in Article 3 of
these regulations.
With the exception of the items covered in Article 7.1, the chassis
frame must be exactly to manufacturer's standard specification.
Manufacturers' options on chassis shape and material are
prohibited."

Series production 2‐ to 4‐axle trucks (chassis‐cab) produced by a
recognised constructor, with a permissible total laden weight of
minimum 3500 kg and fitted with conventional bodywork are
eligible.
The competitor is responsible for providing all the proof requested
by the scrutineers, such that they may check that the submitted
vehicle is or has been produced in series and that it is on normal
sale to the public, and is homologated in Group T4."


"The combination of axles and wheels/tyres fitted must not cause@
the vehicle width to exceed 2550 mm, nor increase the front or rear
wheel track by more than 150 mm beyond manufacturer's standard
specification."

+ trucks have to be homologated by FIA

There was one at Goodwood this year:

that's the word "intimidation" made truck