Surprised no one has posted on the Tour De France yet. Team Astana looks like the Team to beat and guess who is on this Team, Lance Armstrong. I won't post todays results because like some of you I don't get to watch the race till I get home. I will say that two riders have identical times on the leader board for the Yellow Jersey. Is anybody else having issues with the Versus Channel or more specifically with Adelphia poor digital reception? Americans are looking good. It will be intresting to watch who is going to take the lead role on Team Astana as they have 3 contenders in the front.

I have Verizon Fios and the Versus channel is just fine. In the mornings when I get ready for work, I catch a little of the live coverage. But usually watch it before I go to bed. Good to see the Americans up there. Still early though...

I've got Time Warner Cable here in LA, no problems with the feed, can't say the same for Cox in SD. I never thought Lance as one to be in a support role. He is a ma'chine!

I have dish network and I record it each morning (no problems) then watch it when I get home from work. I'm surprised how excited I am to have Lance back in the picture. It gave me chills when he looked in the camera and said "I'm here to win it!" But I like Levi too. So I hoping between the two of them they can bring home an American victory again.

I am excited for the tour! Lance is definitely a worthy contender without giving up his current position right now in the race!

1. I hate when you go to ESPN.com or MSN Sports and they have polls and one day it shows only 20% of the voters thing Lance has a shot at winning, then Lance does well and places high in a stage and the next day 60% of the voters say he is without a doubt going to win! Pick a side and stick to it!

2. I always thought that if Lance came back he wouldnt be a support rider and help someone else win, that he was going to go out to race for the win, and right now the captain of the team he is on is one spot behind him, but I think theyre may be more going on behind the scenes of the team trying to get Lance another 8th win.....I dont know!

First mountain stage comming up. Who will emerge from the mountains victorious? I think it is a safe bet to say one of the Astana riders will be leading tomorrow. I was so pulling for David Miller today, I really thought he could pull it out was not to be his day. Has anybody noticed all the bike riders out since the Tour began?

I hope lance is not going to settle for a support role for Team Astana, he should have been in the Yellow Jersey today.

Lance is not a happy camper, I think yesterdays ride motivated him to go for the overall. Sunday will be a good climb and you will see a new yellow jersey. Monday rest day and then two boring flat sections. I predict Team Astana will have three to four riders in the final group of less than twenty.

The Tour will start to heat up tomorrow with the start of the climbs. It will be very intresting to see what happens with Team Astana. Time to find out if Lance is up to task. I personally don't like Cantador after the BS he pulled the other day and hope Lance and Levi put it to him.

Racbaja said:
I personally don't like Cantador after the BS he pulled the other day and hope Lance and Levi put it to him.
Click to expand...

I didn't hear what did Contador do?

I am talking about the stage when Cantador took off on his own and left the Team behind to take 2nd in the standings. Lance was pissed but kept his composure. From what Lance said there was an agreement that the team would ride together untill the mountain stages, Lance stayed with the Team and fell back to 3rd in the overall standings.

After seeing Laurie's ?, spent a few minutes on the web, heres a few links: 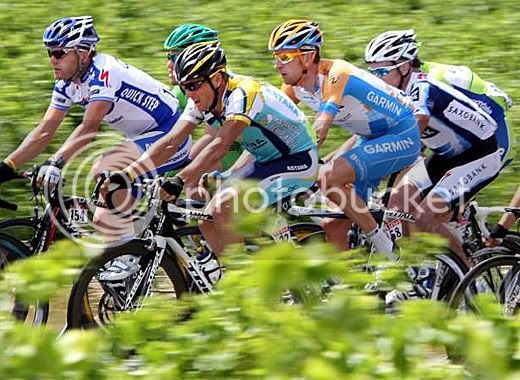 Also as Ron said, rest of the tour will be intense, starting tomm. In addition to Contador / Lance, there are several contenders remaining, including 2, yes two more, on team Astana! Hopefully stage 20, [URL="http://www.letour.fr/2009/TDF/LIVE/us/2000/index.html"]Mont Ventoux[/URL], will play a key role in the yellow and be an epic stage!

first off, Cavendish is puttin it down in the sprint stages...wish farrar was gettin some(might be able to win a stage if cavendish starts to focus on the green jersey), but daaaamn cavendish is a superstud.
second, Lance is def. racing for his 8th tour, Ive been lucky enough to ride with LA(in my past life I was a cat. 2 road racer)and let me tell you, he will be a serious contender on Mount Ventoux(he only knows one thing on a bike and thats winning)...Levi, isn't... never has been, never will be...he's too content to ride the wheels of others(instead of taking the race into his own hands)...to bad he's a really nice guy.
Contador will put everyone including LA in difficulty on the climbs, doesnt mean LA wont ride smarter(better) than him but watch how fast he's going to go... AC might be 'peaking" to early though....daaaaamn I love the tour..makes me wanna start ridin again!
on another note watch tommorows stage its a tricky one and you might see some unexepected things happen...its after two flat(sprinter)stages and its a lil more difficult then people are assuming....

I hope this guy shows up soon.

JeffG said:
I hope this guy shows up soon.
Click to expand...


I've seen him. They've made a big deal out of him.

Thanks for the info on Contador. I missed the day he took the lead. I'm really hoping for Lance. I can't imagine returning to this level of competition after 4 years off. But he looks great.

Levi is out of the tour....with a broken wrist.
It happened in the last mile yesterday when he crashed

Manning said:
Levi is out of the tour....with a broken wrist.
It happened in the last mile yesterday when he crashed
Click to expand...

As Lance said today he was 25% of the work load for the team and will be missed. It should get interesting now that Levi is out and Astana has to duke it out one on one with the Sleck(sp) Brothers. Stage 16 can't get here soon enough.