PRO4-99 said:
crandon was fun and those greaves boys were fast for sure. it wasn't easy but i feel we had an advantage. both races my passenger side of my truck was destroyed. both impacts were from cj to me. Im not pointing fingers but he nailed me in turn 1 and i ended up getting pushed wide off the track, no biggy. But it bent my door bars in 8" from the shot. then in the cup i drifted into the finish line turn and hit a heavy spot which slowed my corner speed and he punched me in the door. almost into my dry sump tank, not his fault on either shot really but i wasn't feeling much love from cj. then in the class race on the re start jonny was first, cj , then me and he " missed a shift" with an automatic! jonny pulls 4 car lengths on all of us cause cj didn't go when pops did. Just remember jonny always complaining how my dad used to block for me, my how the tables have turned! Im saying all of this with good heart and no bad feelings. Just giving an inside look at the weekend from my view. I got word that on sunday race crandon track broke the record for ticket sales, over 20,000 paid fans packed the track!! those numbers are huge! i missed crandon for a couple years and was so glad to bring our family there with my bros family and my dad to enjoy crandon like we had our whole lives.
Click to expand...

Crandon was AWESOME !!!! Had a great time watching the parade on Friday with the LeDuc family collecting candy for the kids . 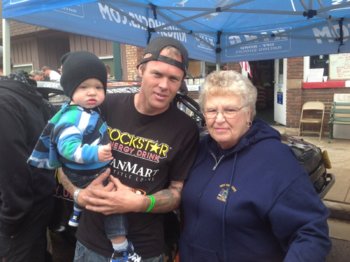 Mom just loved that lil boy thought he was sooooo cute . The guys didn't even mind when she kept getting their names mixed up . Called Todd Kyle and Kyle Todd lol . She finally got it right when Kyle won the race lol .
Last edited: Sep 20, 2014
J

So what was all of the drama in Pro 4 last night? MacCachren doesn't seem very happy.
Advertising supports this site

Each time a man stands up for an ideal, or acts to improve the lot of others , or strikes out against injustice, he sends forth a tiny ripple of hope.~RFK 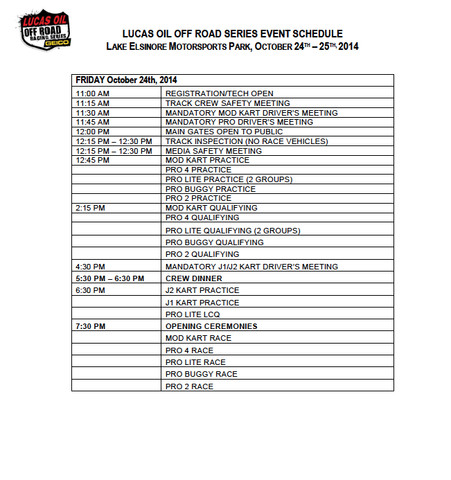 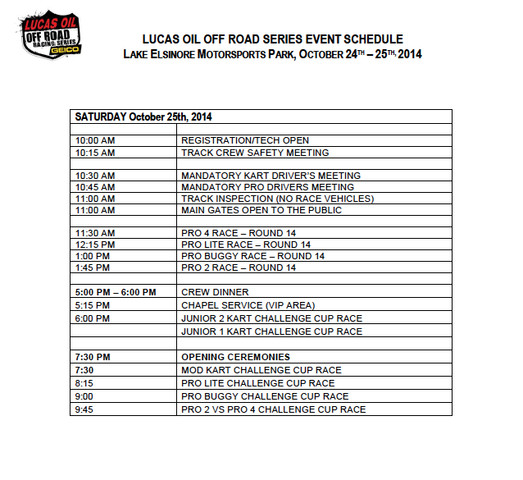 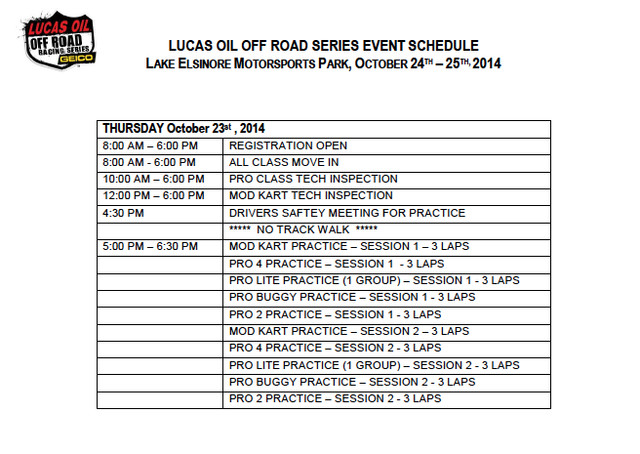 Road to a Championship with Sheldon Creed EP.3

Follow Sheldon Creed as he follows his dream of becoming a Pro-lite Champion in the Lucas Oil Off Road racing series, also watch Sheldon As he competes against the best drivers in the world in the Traxxas Racing Pro-2 at Crandon International Race way !!!

Brock had an awesome weekend of racing at Las Vegas Motor Speedway, He walked away with 2 Mod Kart Podiums and some great seat time in his Pro-Lite !!!

Cole has had a season full of Up's and Down's, Yet nothing is going to stop this talents young man from racing, He is still out on the track proving how fast he is.

Thank you for being patient while waiting for the 2015 Lucas Oil Off Road Racing Series schedule. Here are the dates for the upcoming season.

We will be continuing to work on all of the 2015 information in the coming weeks and will release details as soon as they are finalized.

The 1st event in Lake Elsinore is a Friday/Saturday night race. The 1st email I sent out had dates for Saturday and Sunday. Please make note that it is the 20th and 21st. I apologize for any confusion.

Thank you!
If you read it on the Internet it must be a true story !

^^^ but all their tracks are awesome though!

CORONA, California (December 19, 2014) – The first ever race outside the U.S. and four events in Southern California, where the sport was born, highlight the 2015 schedule for the Lucas Oil Off Road Racing Series presented by GEICO.

It is the most ambitious schedule in series history, with nine weekends at seven different venues and 17 points races to determine the pro class champions before the breath-taking Challenge Cup battles bring the season to a conclusion.

The season will begin March 20-21, 2015, at Lake Elsinore (California) Motorsports Park and conclude October 24-25 at the same exciting venue, and at midseason everyone will go south of the border down Mexico way.

That will happen August 1-2, 2015, when rounds 11 and 12 of the best short course series in the world are run on a purpose-built short course track at the Estero Beach Resort in Ensenada, Baja California, Mexico.

Ensenada, a port city about 70 miles south of the U.S.-Mexico border, has for years been the hub of desert racing on the peninsula as the traditional starting point for the legendary SCORE Baja 1000 and Baja 500 races.

The fans there have become familiar with Rob MacCachren, Bryce Menzies, Justin “Bean” Smith, Ray Griffith, Larry Job and other Lucas Oil series regulars who also participate in the long-distance desert races. But this will be their first chance to see them display their skills in the fast, fender-to-fender short course races.

“Everyone at Lucas Oil Products and all of us with the Lucas Oil Off Road Racing Series are extremely excited about our new Baja International Short Course event,” series director Ritchie Lewis said. “There are a lot of desert off road fans in this area and I’m pretty sure that after our great drivers and crews show them what we do and how well we do it they’ll be short course fans, too.

“The Ampudia family has talked to me about this since we met and the talks got serious last spring. A lot of people have helped move things along since then and thanks to them we’ve been able to get all the agreement in place to make this a reality.

“There’s still a lot of work to be done, though, and we’ll keep everyone updated on the progress.”

There’s a lot to be excited about as the series rides the momentum built on past successes into the 2015 season.

Six-time champion Brian Deegan and title contender Bryce Menzies are moving into Pro 4 and Eric Barron is returning to the series to challenge Kyle LeDuc, Carl Renezeder and Rob MacCachren.

The Pro 2 class will be stronger with reigning Pro Lite champion Sheldon Creed and Pro Buggy star Eric Fitch joining an already deep pool of contenders. Indications are that Jerett Brooks, who won the season’s final three Pro Lite points races and the Challenge Cup, will be a full-time threat in that class, which also is adding promising Pro Buggy driver Taylor Atchison and Modified Kart stars Brock Heger and Cole Mamer to its roster. In additions, rising star Bradley Morris will be making a comeback after missing most of the 2014 season with a broken back.

The scheduling emphasis on Southern California venues will make things slightly easier financially for the race teams and offers an appealing contrast for the fans. The three events at Lake Elsinore (March 20-21, May 30-31 and October 24-25) will give the best spectators in motor sports more opportunities to watch their favorites on the course where they go the fastest and jump the farthest of any track and the weekend at Glen Helen Raceway (July 18-19) will let everyone see how they handle a tighter, more technical track.

“We had the most competitive season in our history last year and 2015 is shaping up to be even better,” Lewis said. “I can’t wait to get started.”

ROCKSTAR- Rockstar Energy Drink is designed for those who lead active lifestyles – from Athletes to Rockstars. Available in over 20 flavors at convenience and grocery outlets in over 30 countries, Rockstar supports the Rockstar lifestyle across the globe through Action Sports, Motor Sports, and Live Music. For more information visit: www.RockstarEnergy.com.

The Ensenada race will be a huge turnout. Don't make it too expensive though!
www.daileyengineering.com

The schedule looks great but....

With that many races (with 14 also in TORC, and nearly as many in R.G's series) are we getting dangerously close to over saturation of the market. Not only that but, with that many events, the financial stress on the teams will be ramped up to 11!

Not saying this is a bad thing but, just wondering if major sponsors will start to pick a choose which series they support. In years past, a company could afford to sponsor a truck in both. With this many events and three series to choose from, along with the increased costs, several may decide to just support one. This will several teams back at home unable to afford to race.

I'm not trying to be negative, just wondering out loud.

FYI, this is my first post from my new iPad via the App.


Sent from the RDC Mobile App. Get it for your IOS device today
Advertising supports this site

pdailey said:
The Ensenada race will be a huge turnout. Don't make it too expensive though!
Click to expand...

I've got $5 on your ticket and a Corona for you and the misses!
If you read it on the Internet it must be a true story !

Ensenada race is awesome! Props to LOORRS and the Ampudia family for making it happen.

The guys over on the TORC Pages say the CJ Greaves old Pro2 has a new owner. And it's headed West. Reportedly, Myan S. Has a new TOY.

New to the class-

Who will win one first?
If you read it on the Internet it must be a true story !

New to the class-

Pro 4 should be gnarly in 2015. Lots of potential challengers for the #99
Check out www.darrenhardestyjr.com
Advertising supports this site

dhardesty said:
Pro 4 should be gnarly in 2015. Lots of potential challengers for the #99
Click to expand...


Leduc99 - New Truck - New competition Will be tough to beat!

Rob MacCachren - Is paid to win Championship. This is year 3 in the class

Eric Barron- Gonna be fast in the Tonka Toyota.

Greg Adler10 - New Spotter and is hungry for a win.

Brian Deegan - Not looking for a 2nd place trophy.

Todd Leduc - Heard some rumors ! Should be good!

And??
If you read it on the Internet it must be a true story !