Here are a few pictures of the new Trophy Truck #83 built by Racer Engineering and the story behind the build... After many phone calls, messages, and questions I’ve finally wrote up the build thinking process…

KEEP IN MIND THIS IS ALL OPINION BASED!!

We had met and visited quite a few shops thinking about which truck to build. It wasn’t until my dad threw out the idea to stop by Dale Dondel’s shop, Racer that it even seriously crossed my mind. To be honest, I didn’t really put much thought into a Racer truck, but it was worth a look. I knew what I wanted in a truck. Thing I has set in my head were: cooler configuration/usage, overall weight goals, fuel amount, spare tire configuration, tire size capability, comfortable/roomy cab, quality, a million other small specifics and of course the biggest thing of all, the handling of the truck through the desert. After visiting Racer and talking to Dale and his ideas/theories, both me and my dad knew it was time to set up a test time.

After lots of testing and driving different kinds of trucks, I decided to build with Racer. We tested Geisers, Jimcos, I.D Design, lightweight small Racers and Big Racers, and all sorts of different vehicles, all of which have their advantages and disadvantages; we've decided to build a Big Racer Engineering Trophy Truck, similar to Cops and Sproule, which I felt had no disadvantages, I felt it was the best truck I drove to suit my driving style... It was the Sproule truck we tested that really sold me on the big Racer. The truck turned good and more than anything the truck was INCREDIBLEY stable and worked amazing through the small and BIG whoops, better than anything I have ever driven before. Don’t get me wrong I do not hate on other trucks and builders. To each their own, different trucks suit different drivers, and any truck I tested was of great quality truck with great potential and capability.

You may be thinking I’m just building the same 'ol thing as 30 other TT's, but I’m not, similar ideas? Yes. Somehow the "big heavy” Gieser truck continues to stomp the competition, unless you are Robby Gordon that is, and in that case, Robby can drive the wheels off a Robby truck, not sure about anyone else… I went away from the lightweight revolution of trophy trucks, I didn't feel they worked as good through the bumps and some of the "lightweight" trucks didn't actually turn out to be very light weight in the end anyway. If I was going with a “lightweight theory” you have to stick with the “lightweight theory” there was no sense in stacking 2 spare tires, 95 gallons of gas and a reasonable amount of spare parts on a lightweight theory based truck, which I plan on doing. The components and set up I am running on the “Big” Racer, doesn’t actually turn out to be that much heavier than many of the “lightweight” trophy trucks. And even though it’s a “big” truck, the truck will be lighter than 80% of the TT field…

I had also driven trucks with the newly popular 5-6 speed gearbox, worked great. Advantage? In my opinoin, no. Too much work, too much shifting, and unproven. 100 bucks says no one actually knows what Robby has!
coming into a hard right corner at 100 MPH decelling in 6 seconds, down shifting from that 6th gear can become a pain in the butt. It's my understanding people feel Trophy Trucks are big massive truck that hardly fit through the course and are slow, wrong. Drive a 1600 car through a tight and techinacal section at 50MPH then drive a TT through a tight and techincal section at 50MPH, feeel like youre hallin butt in the 1600 car. Trophy Trucks are speed deceiveing. I just came from a light weight 4 speed class 1 car, it's not much quicker in my opinion. If I wanted to acclereate more, I might want to remember the fact that the project tire wasn't exactly meant to be "grippy". A steady right foot is all it takes to get up and go, not flat footed to the floor out of every corner.

Another quality the Big Racer TT had was stability. It was incredibly stable through the bumps, and also at low and high speed turns, unlike many other “heavier style” vehicles I have driven. This was a big one for me, drifting at 100mph, no problem in the Racer truck. The truck also worked very well through the bumps, small or big, the truck went through everything better than anything I had ever driven. 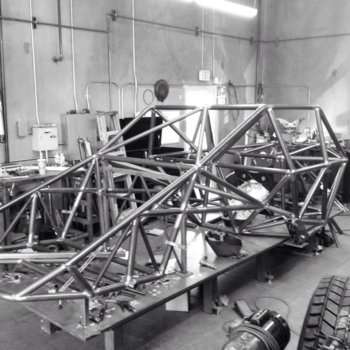 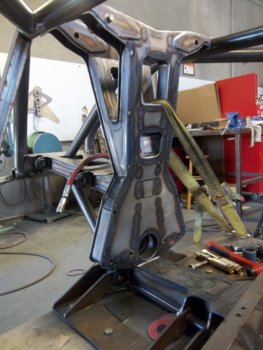 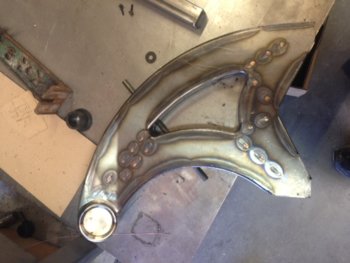 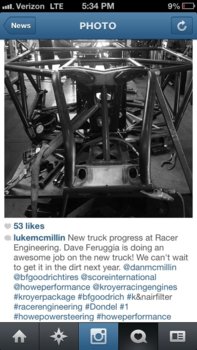 Congratulations, you've paid the dues, done the time and proved yourself. You'll do great in that awesome truck. Looking forward to seeing it at the races.
Ramsey El Wardani
http://AgileOffRoad.com
Smarter Than Dirt!
One Man Racing
​

Only when he needs a forth place finish.

I was very surprised to hear you went with a Racer, but if there is anybody (currently in off road racing) that has done ALL of their homework and can win in a vehicle that they feel comfortable in; it's you!

awesome. congrats guys.
But I said with all due respect!
Baja Fools

So Luke isn't getting one of Dan's hand-me-downs?

Really cool! Congrats. So with the big truck you are going 42's on 20's? Please say yes
Nikita Khrushchev said"We can't expect the American People to jump from Capitalism to Communism, but we can assist their elected leaders in giving them small doses of Socialism, until they awaken one day to find that they have Communism. "

Dezertpilot said:
Really cool! Congrats. So with the big truck you are going 42's on 20's? Please say yes
Click to expand...

Not sure, that's all up to BFG. They are redesigning a 39, which may turn out to be better.
Trophy Truck 83
McMillin Racing

Luke im very happy to welcome you to the racer family and you owe me a ride for roasting my alt when you test drove my truck
Tucker Motorsports
Sorry i cant spell I'm Super dyslexic !!

Location
Middle of the desert

Luke, thanks for taking the time to type out the thought process and decision making part of choosing a TT builder. Many of teams have had to go through thevsamevdecision, but we don't get to hear/read that part. Fun to read and think about. Best of luck with the new truck, look toward to watching it evolve
WHEN YOURE RACING YOURE LIVING, EVERYTHING ELSE IS JUST WAITING!! In memory of B.J. Bates.
B

LukeMcMillin said:
Not sure, that's all up to BFG. They are redesigning a 39, which may turn out to be better.
Click to expand...

Not that I really know, just an observation... But I can't see any advantage to the 42" on a 20". I know you aren't as concerned with weight but that is extra weight in a place where you don't want that weight at all. Harder on hubs, uprights, steering, brakes, and drivetrain components. Plus changing tires is just that much more difficult.

I think if they were a better option there would be allot more BFG drivers using them. I have yet to see anybody win on them accept maybe Wyllie at a SNORE event racing 1 or 2 other trucks in his class.

Thanks for the write-up and sharing your opinions. I hope you do well in TT, Racer makes a very nice truck.
Mini's are for girls

CaptinCrash said:
Luke im very happy to welcome you to the racer family and you owe me a ride for roasting my alt when you test drove my truck
Click to expand...

Haha, sorry about that, tell dale to put it on the tab! Thanks for letting me drive the truck, it was the best truck I have ever driven. It's looking good at the Off road expo, best truck there.


BajaFand said:
Not that I really know, just an observation... But I can't see any advantage to the 42" on a 20". I know you aren't as concerned with weight but that is extra weight in a place where you don't want that weight at all. Harder on hubs, uprights, steering, brakes, and drivetrain components. Plus changing tires is just that much more difficult.

I think if they were a better option there would be allot more BFG drivers using them. I have yet to see anybody win on them accept maybe Wyllie at a SNORE event racing 1 or 2 other trucks in his class.

Thanks for the write-up and sharing your opinions. I hope you do well in TT, Racer makes a very nice truck.
Click to expand...

I agree. Everything is worth testing though, I know Dale has tested and really likes the 42's. The truck is being built with 39s on it but has the capability to put on 42's with minor changes. I do agree though it is a lot of weight gain for maybe not enough advantage. 4 tires of rotating mass plus 2 spares is a lot of extra unwanted weight... Although bigger the tire, smaller the hole, but dang I don't know how the Sproule truck could have worked any better. BFG came out with a new 39" tire that is a bit more aggressive, I think that is where the advantage will be found, better turning, acceleration and deceleration. The 42 definitely does put a bigger load on a lot of parts, probably not worth it... And obviously the 42 will have slower acceleration but more top speed... then again 135mph on a 39" tire is just about as fast as I ever want to go... The other advantage of the 42 is getting the tires to live. We have a 95 gal fuel cell with approx. 2.5mpg going about 230 miles. That's about as far as I want to push the rear tires of the TT. Bald. 42 will last longer...

All a toss up, i've chosen to stick with 39's though.
Trophy Truck 83
McMillin Racing

Mike @ pit b said:
So Luke isn't getting one of Dan's hand-me-downs? 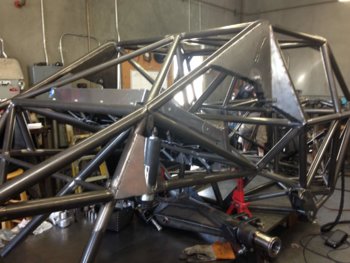 The truck is coming along nicely! Coolers mounted, and shock mounts. Mocking up trans and mid plate. Dale, Dave and everyone at Racer is doing a great job on the truck. It is coming out very nicely! Making a few changes compared to the previous Big Racer's. We're excited to debut it next year at SF.

And FYI that is not our rear end in the picture. We are having a rear end built in vegas by Billy Gehorke.
Last edited: Oct 29, 2013
Trophy Truck 83
McMillin Racing

Checked this beast out last Saturday when I was at Racer, looks like a winner!


Sent from the RDC Mobile App. Get it for your IOS device today
2015 BEST IN THE DESERT CLASS 1000 POINTS CHAMPION & ROOKIE OF THE YEAR
2012 SNORE OVERALL POINTS CHAMPION
facebook.com/starrracing youtube.com/user/StarRacing1210