When my truck is up on the stands where I like it, the frame rails and trans pan are both about 24 inches above the floor. So I have had some sketchy moments trying to get transmissions in and out. I have been using a furniture dolly with two pieces of plywood and a floor jack with a 10 inch disk welded on top. Besides being rickety and often nearly falling on me, another problem is it's too tall with the trans on it to roll under the truck. Getting the trans onto the jack while under the truck is very not fun..

So I went looking for a proper trans jack that goes low to the floor at the bottom and capable of reaching 24 inches high. A good American one like an OTC is $2,000. Harbor freight and others have knockoffs that start around $250. But as someone who has been victimized by the Chinese stealing a patented invention and laughing at us when we tried to defend our patents, I do not set foot in dollar stores or harbor freight. (Ever heard of the Superknife folding utility knife?)

On craigslist I found a cheap ATV jack for $90. Yes it's Chinese, but at least I didn't by it new. Then I cut everything off to make it lift higher and reposition the bottle jack more horizontally. I extended the base 10 inches and made new square-tube arms that are 8 inches longer. It took a while to figure out new brackets that would swing far enough with the 5 inches of ram movement, while also keeping the bottle low enough to clear the trans when the platform is down. I put way too much time into it, probably 20 hours, and I had to pretty much finish it before I even knew for sure it would work. But it DID work, beautifully in fact. Was it worth the trouble? No, since I figure my time is worth more than $10/hour, but it was fun and I learned some useful things. So yes I guess it was!

PS, is there a new limit on picture size or count? 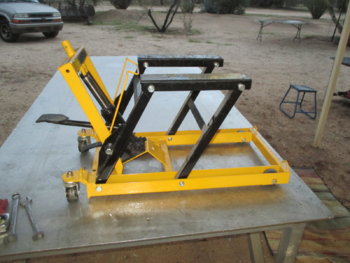 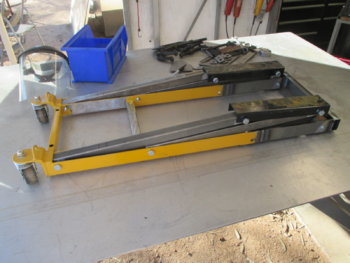 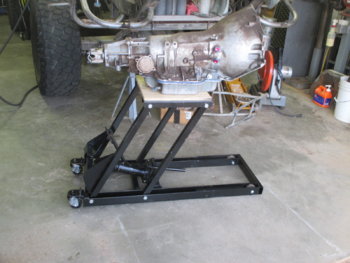 Cool looks like something I would have done.
A vehicle hoist is worth whatever it takes though.
Groveling on the floor is for the birds.
I used to be a wrench, now i'm just a tool.

Yes working on the floor sucks, but the new jack should help a lot. It already came in handy by going high enough to mount this trans right up to an engine stand. 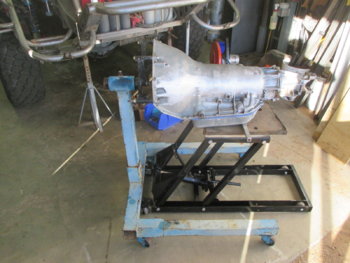 Wondering why did you pull the trans?.
Seems you can"t do anything on the stand you can"t do with it bolted to the engine.
I used to be a wrench, now i'm just a tool.

scottm said:
But as someone who has been victimized by the Chinese stealing a patented invention and laughing at us when we tried to defend our patents, I do not set foot in dollar stores or harbor freight. (Ever heard of the Superknife folding utility knife?)
Click to expand...

I still have an Original Superknife that was branded Lightning Audio for them to use for promotional... I use it all the time, blade changing is more difficult, but it is a smaller/sleeker package than the current crop of Husky ones I also have from Home Depot that I keep in the cars and trucks to use in the event of an emergency...
Freelance Photographer/Editor Looking for Work!
PM For Details.

The superknife could be a thread of it's own. I have the very first pre-production proto superknife that was actually used for work, by me in fact when I reroofed a small house. In Scottsdale. In August. In 114 degrees. It held up better than me..
SNORE, AZOP, and SADR class 8 Chevy - 372sbc/th400/14bff - The big DOG
I spend most of my money on beer, women, and racing. The rest I just waste..

I actually have a need for a jack similar to this for installing and removing centrifugal water pumps from our oil field equipment. A former co worker had his street bike in the shop and brought a jack exactly like your original one in. I borrowed it and made it work...sort of, but with a few modifications it would have worked much better.

I am all about building tools to fit the need. I have built several over the years. In fact, a while back I showcased one on here that I have used a bunch and when the factory repair guys were here doing some warranty work they saw it and were amazed. They took pictures and proceeded to build their own back at the shop for themselves. I wish I could have charged them for the idea, but oh well. Just the fact that I came up with something that would have made their lives easier years ago gave me satisfaction.

I finally used it on a trans. It slipped the trans in under the frame with room to spare, and easily lifted it into place. The only thing I want to change is to make the platform adjustable for angle. In these pics there is a piece of formed sheet metal holding the front end of the trans up. 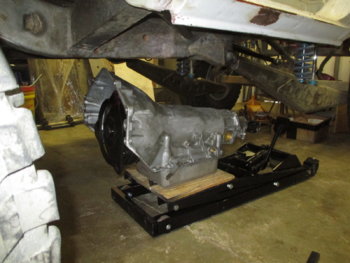 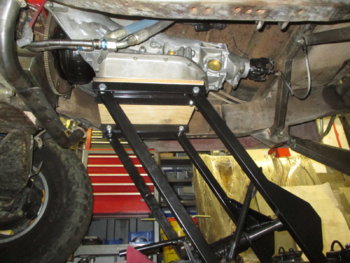 I was feeling energetic after work, so I put on the final touch - made the platform angle adjustable. I screwed the board to a piece of scrap of hinge in the back, and welded nuts to a piece of angle in the front, so a couple 3/8 bolts make for easy adjustment. I have way too much time in this dumb thing! 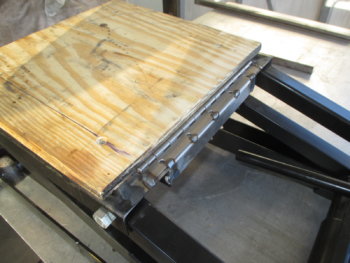 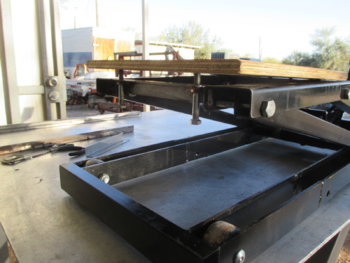 How long are the links to the platform. You mentioned that you added length, but not actual measurements.

Hi retro, I forgot actually, but it says in the first post the base was extended 10 inches, new arms were made that were 8 inches longer.
SNORE, AZOP, and SADR class 8 Chevy - 372sbc/th400/14bff - The big DOG
I spend most of my money on beer, women, and racing. The rest I just waste..
Share:
Facebook Twitter Reddit Pinterest Tumblr WhatsApp Email Share Link
Top