I have a week and a half to heal up, I will be fine, right…?

Qualifying day is here and I drew 29th off the line. Now, I’ve never qualified for a race before so I’m a bit nervous and I also have a new co driver in the truck with me. Boner needs to heal up and is sidelined this race. So first we get to follow each other, in order, around the 5 mile course to get the layout. Then one truck off the line every two minutes until I’m up. I’m hoping I can get in the 10th-15th area but when I look at the list of racers I’m thinking ‘Holy poop, these are the best off road racers in the world!’ The list of goes on and on and I think how did I even get on this list?! Me, Johnny Nobody vs. the best off road racers in the world, what the hell am I doing? It’s now my turn to qualify and I want to go fast but keep it easy and don’t wreck the truck again! Also go fast enough but not so fast you f*** up, oh poop, ok, medium fast…? I hit the gas and I’m around the first couple of corners with ease. We hit a couple of bumps and the truck bottoms out hard. Hmm the back is way too soft. I keep on driving trying not to make any mistakes. It all goes by really fast and we are done a couple of hours later. I’m thinking “I’ve got to be top 15th or so.” The results get posted and I find myself on the list. Top 15th, right? Hell no! I’m not even top 20, LOL, I’m 25th. Damn these guys drive hard, really hard, what am I doing here?

I think we line up around Noonish and the race starts at 1:30PM. Remember I am 25th off the line out of the 46 vehicles that qualified. I have two plans in my head: The first one is get the green light, pull forward a couple of hundred feet, and do a couple of smoky ass donuts right downtown then just have fun and race my race. The second one is don’t do anything stupid like flying off anything that I don’t know what’s on the other side, no rally car driving on the graded dirt roads, and don’t crash or break the truck at my first race of the season. As I am getting ready to leave the line I opt for number 2. I’m thinking a 7th place finish would be just right for my first “real race”. Well we are off the line I roll into the gas. The 850 HP Kroyer Racing Engine almost lifts the front tires off the ground, and we are running the new 40” BFGoodrich KR3 Racing Tires! About a mile off the straight line start they have a little S curve set up with cones and you’re not allowed to hit one. I’m off the gas early and cruise around the first hard left on the blacktop. I’m not hanging nothing out, calm and collective, number 2 style, and we have a great first lap. I never got passed but we did pass a lot of trucks in the pits and a few broke down on the course. The GPS says I am running a 63 MPH average and I know it’s to slow. So I pick up the pace a bit and am feeling more comfortable in the truck and with my new co driver Eric Clay. We are coming into Pit Two and the truck is telling us we are down on oil. My pit crew is telling us we are currently in Fifth, yah, FIFTH place! I am thinking ‘No way I am in 5th place…’ but anyway I decided to pull into the pits and take two quarts of oil. After about a minute or two and we get passed by two trucks. I knew I had just made a huge mistake. I just when from 5th to 7th in a flash. We race out of the pits and I am now back into eating dust. It’s starting to get dark and we start flipping on lights. None of our front bumper lights are working I’m thinking ‘Damn, those are all brand new Baja Designs lights!’ We check the breakers and still no lights. We just have the 50” Baja Designs light bar on the roof. It’s so dusty and no real wind so it’s just hanging in the air and I can’t see poop with the top bar. I really need my bumper lights. Well as it turns out right before Pit 1 I had been chasing down a truck in the dust and sun. When I went in for a nerf he hit his brakes, I hit him and I mangled all the brand new Baja Designs lights and wiring on my front bumper. poop happens and we race on. Right as we leave the gravel pit we see a racer on the right side of the course telling us to slow down and then we come up to a truck on its side in the middle of the road. Another person is pointing us to go down a 6 foot or so embankment, so I do. I have no clue where it goes but am praying it will get me back to the course. All of the sudden I see a big wet area with a large pool of green algae, fungus, and moss and think ‘Oh poop!’ I roll into the gas and the truck starts sinking and slowing down. We make it across and the course is right in front of us. About this time my knees are killing me for some reason. On the longer races they start hurting bad, but it’s a typical thing. I hear somebody on the radio say something about Taylor Mills being out of the race. I tell them to ask if he will do the last lap for me and he says “Hell yes!” My co-driver, Eric, asks if he has to get out and I tell him “Taylor has his own co driver.” LOL, he is super bummed out and was ready to go the distance. We pull into the pits in 6th Place, I jump out we take on fuel and new rear tires. The guys start working on the lights, damn we lose another approx. 20 minutes fixing the lights. We get passed by a couple of trucks while the Mills Motorsports guys & my awesome pit crews get everything working again. Taylor gets in the truck takes off into the night. We hear them calling in every 5 miles. I hear “Race mile 60, all is good.” Then I hear something about the GPS is not working after the fire. … … What?! … FIRE?! … Damn. A fire?! … This can’t be good. poop, fire, GPS, FIRE! FIRE! My mind is going crazy thinking about a fire. So it turns out we damaged a front shock and the oil sprayed on the header and caught fire. Taylor and Josh (Taylor’s co-dawg) got the fire extinguished quickly and the guys from McMillin Racing stopped to help as well as check out the situation. The call was made to keep racing so they jumped back in and cycled the battery switch and the GPS came back on. Now Taylor had to race at an easier pace to get the truck to the finish line, and he did just that. Crossing the line in 11th place overall and 10TH place in the Trick Truck Class. I know I will slowly get the truck dialed in for me and get more comfortable but for now it is what it is.

Thank You all so much for following along this racing adventure 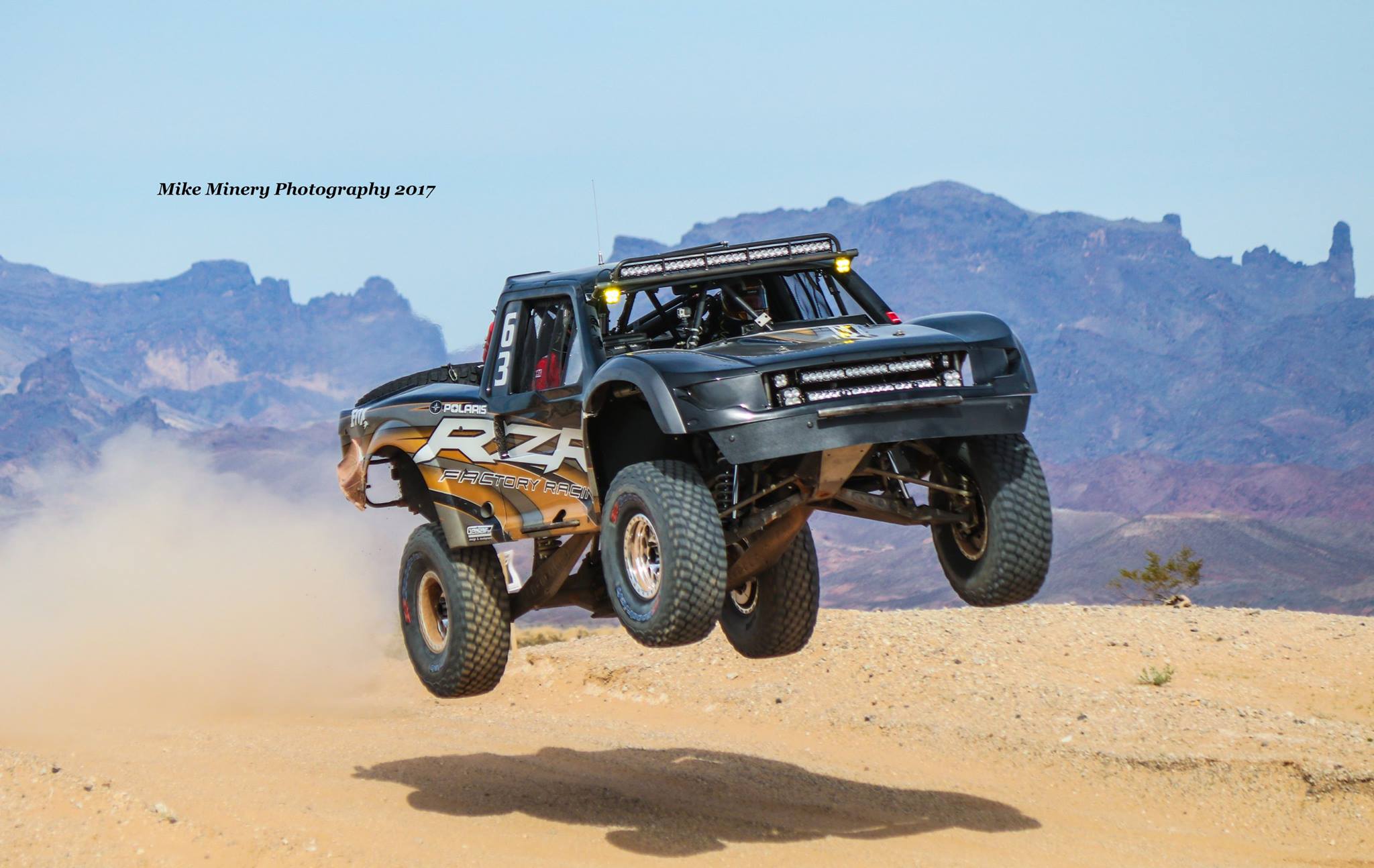 Congrats Johnny! I'm still shocked you even were able to race after you wadded up the truck testing. I hope Bonner heals up and can get back soon.
"If off-road racing is outlawed only outlaws will race off-road."

Great write up!! I really enjoyed reading it.


Sent from my iPhone using Tapatalk

How bout a picture of the wadded truck from testing???

Thanks for Posting Johnny. You always have the best race reports.
Very Entertaining, Honest, Candid, the Bad, just as much as the Good.
You really show the reason why we all do this......Keep it up !!!
Swine Flu Recovery Counselor

Nicotine fix! Nice. Rumor has it the previous owner had that installed so if he had any flats or downtime he could light up. Gangster.
"Oh hell I can do that. Hold my beer!"

How off road racing should be. Family fun , I see your sister in law at the grocery store every week and man she braggs about you lol. Most take this hobby to serious and your attitude is awesome in my book. Great read Johnny