For those who remember Sammy from Chenowth or those who may have heard the name. Well he is still around and building cars. A few years ago when Fiber Tech tried to revive the Chenowth brand, Sammy was who they called to build the cars. A handful of play car chassis were built and two 2 seat updated Millennium cars were built and sent to Australia or New Zealand? Well as most know Fiber Tech was sold and Chenowth was again mothballed.

Well Sammy ended up again with the jigs to build the Explorer beam & a-arm, Genesis & Exodus chassis and suspension. He's also has the old 1600 car jig at his home in Mexico. Sammy still has all the specs on each style of chassis that he was apart of. Since Fiber Tech's attempt to bring Chenowth back, Sammy has been working out of a few other shops, and as of recent I have caught up with him again. He is currently building a new 1600 car for a customer and possibly has two more in line. Sammy is not much into the race websites, so I thought I would share what he is building. Its been cool going by and seeing and hearing some of the history he knows and who he still see's like Ron Hemphill.

This car is not exactly how he has built a few other 1600 cars in the past as this customer has requested a few things, like a full rolled roof line that goes all the way back. The C pillar is in parallel with the B pillar and a few other things. The cab forward design reminds me of a Romo designed 1600 car. Sammy builds the beams, and has the jig to build the rear arms. This car is actually being built on the Genesis / Exodus lower frame jig, or as Sammy said his "multi car jig". 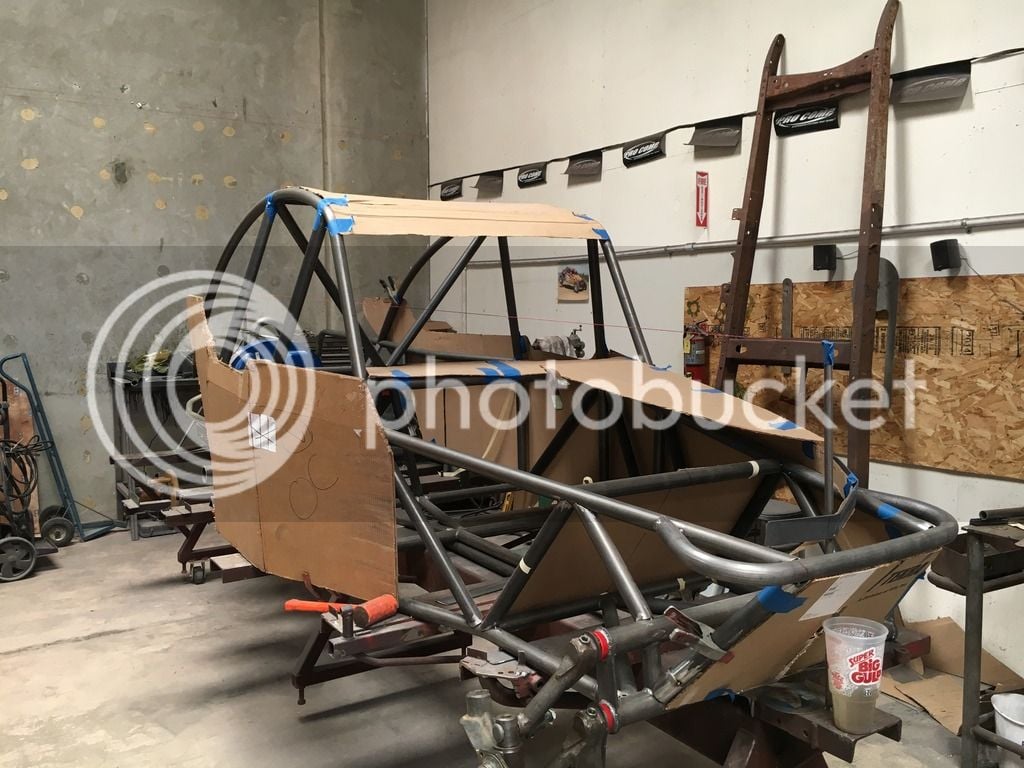 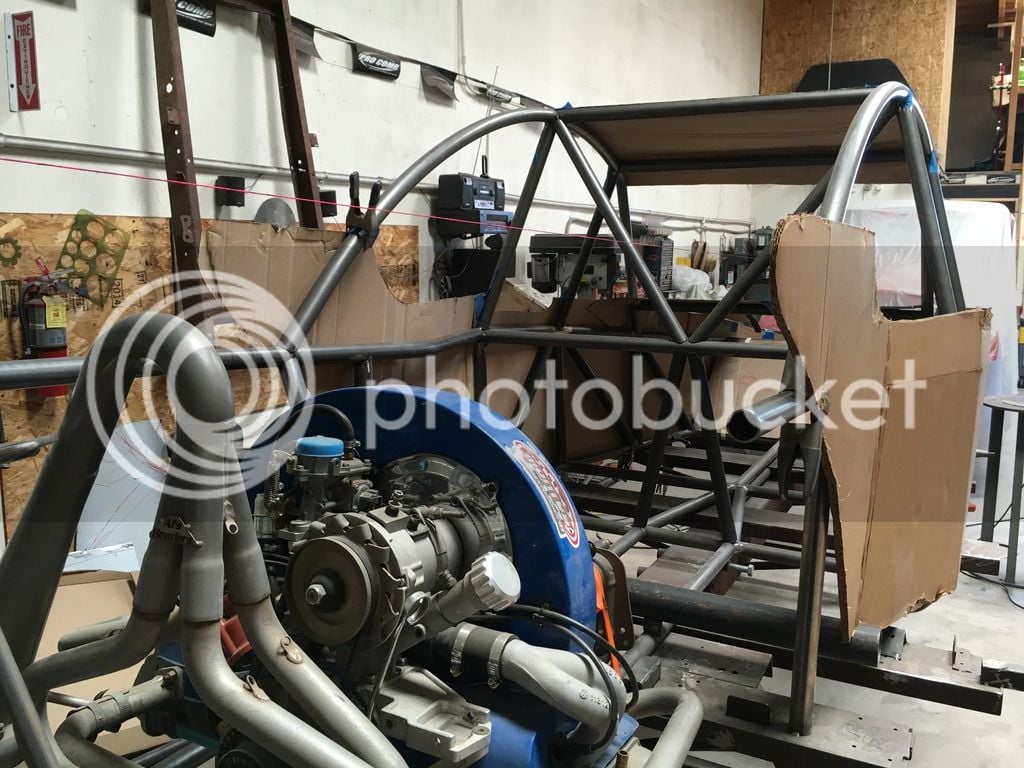 I will try to get more pictures in the coming weeks as the build progresses. If anyone is interested in a Chenowth chassis or needs parts for an existing Chenowth PM me and I will get you in touch with Sammy.
"If off-road racing is outlawed only outlaws will race off-road."

Thanks for the update!
"When I raced my old car I wanted to beat guys by 4 hours, beat them so bad they considered selling everything on Monday" - Pete Swift

That body work should be light and inexpensive to replace.

Went by to see Sammy and the main chassis is done and 95% welded up. While its upside down to finish some welds he was making the floor templates. He is starting the rear arms and once those are done he can figure out the upper rear shock mounts. 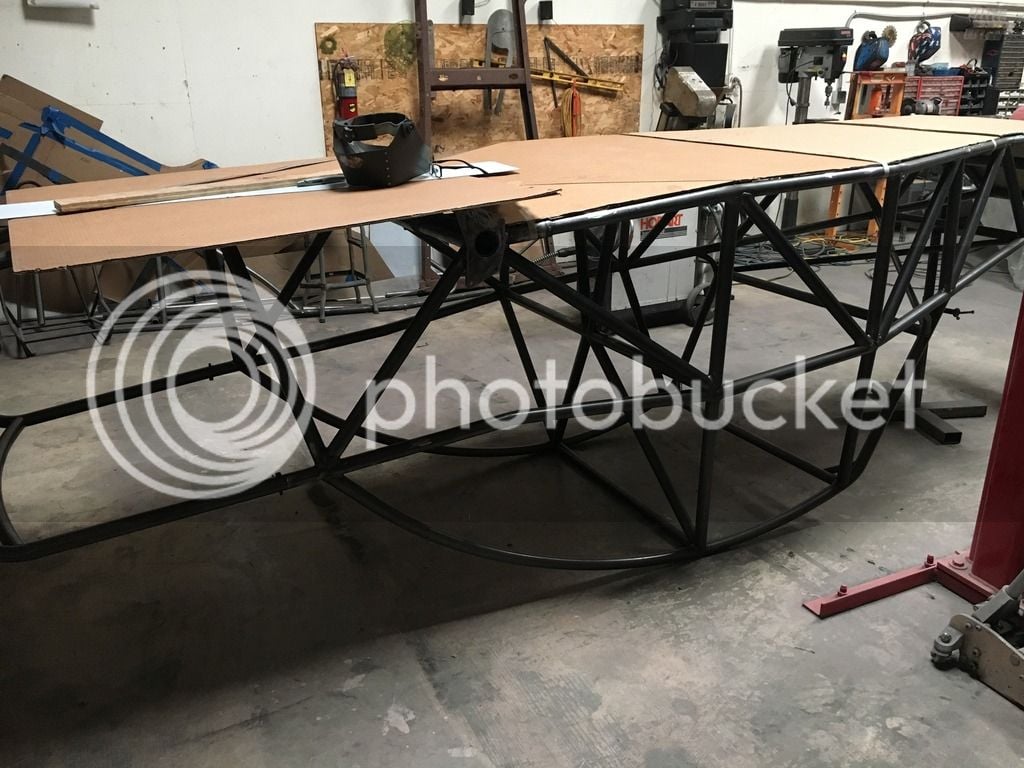 I like the look of the rear bumper and the slightly rolled tubes. IMO the rolled roof line is a bit much for me. Its a bit much for Sammy too, but its what the customer wanted. 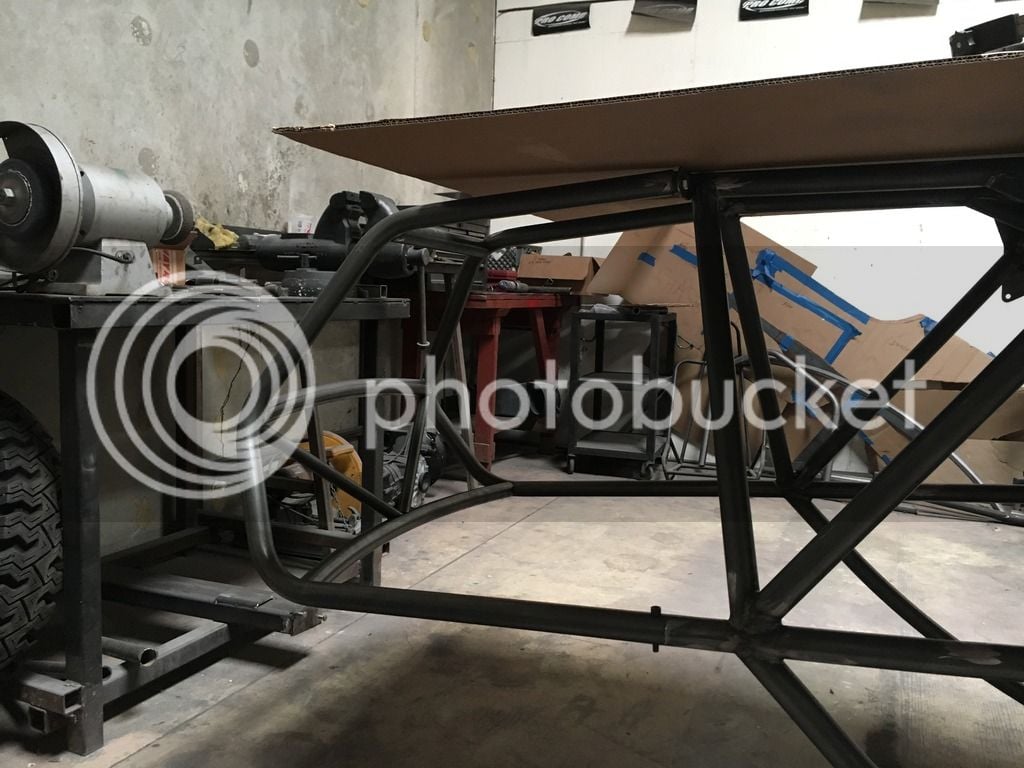 It sounds like he will be starting the second 1600 chassis in a few weeks, and someone is interested in a Genesis chassis.

"If off-road racing is outlawed only outlaws will race off-road."
N

Stopped by and saw Sammy again. Not much new on the 1600 car. Sounds like Sammy is waiting on parts and the owner is waiting on more money to buy more parts! He did get most of the body done, still needs to finish the hood. Shocks are suppose to be on their way so he can fab the shock mounts. While Sammy is waiting on parts for the 1600 chassis he had another guy who was looking to update his current buggy with a new chassis, and swap as much over as he could. Its a budget buggy and the owner wanted it built out of mild steel, to reduce the cost. For what he will do with it, it will probably be OK, and after seeing the current buggy, this will be much nicer and better built. Pretty much all the old Chenowth play buggy's were mild steel back in the day and many are still around. Sammy is adding a few extra tubes in places he has seen cars crack over time. All the suspension parts will be chromoly and will be built off the Chenowth Genesis jigs.
Last edited: Aug 24, 2016
"If off-road racing is outlawed only outlaws will race off-road." Rory said:
Sammy does good work. I'm not 100% sure but i think he welded/fabbed some of the tubes on my old 4 seater when Pete Corwin (Got Sand Performance...*GS?P*) built it at his shop in El Cajon back in 2000...

Rory, Its very possible that Sammy did some of the fab on your old 4 seater. Next time I stop by the shop I'll ask Sammy if he remembers doing any work on your car or with Pete. Sammy has an archive of pictures of cars he's built over the years. Do you know if Pete worked for Chenowth at some point when he was here in El Cajon? I always thought your old buggy was very Chenowth like, Toyota motor if I remember right? The chassis lines look like the Chenowth Genesis with some updates, like the front a-arms and pivots. Plus most Genesis were rear a-arm, but if requested they did make them with a trailing arm.

Here are a few cars Sammy has built over the past few years. The Blue car is a Genesis with rear a-arm. If it had rear trailing arms it would look very similar to your old car. 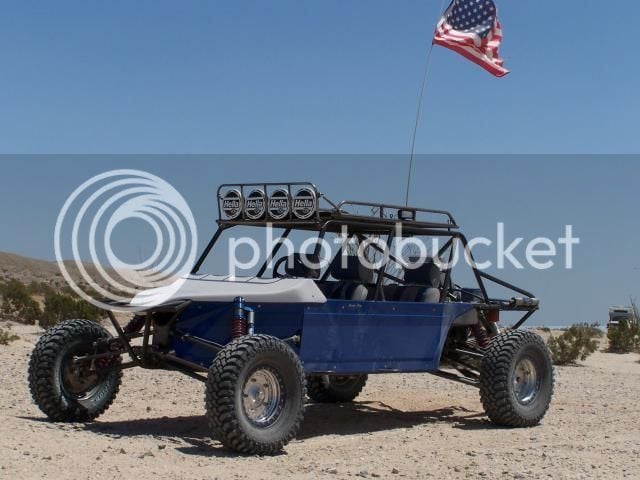 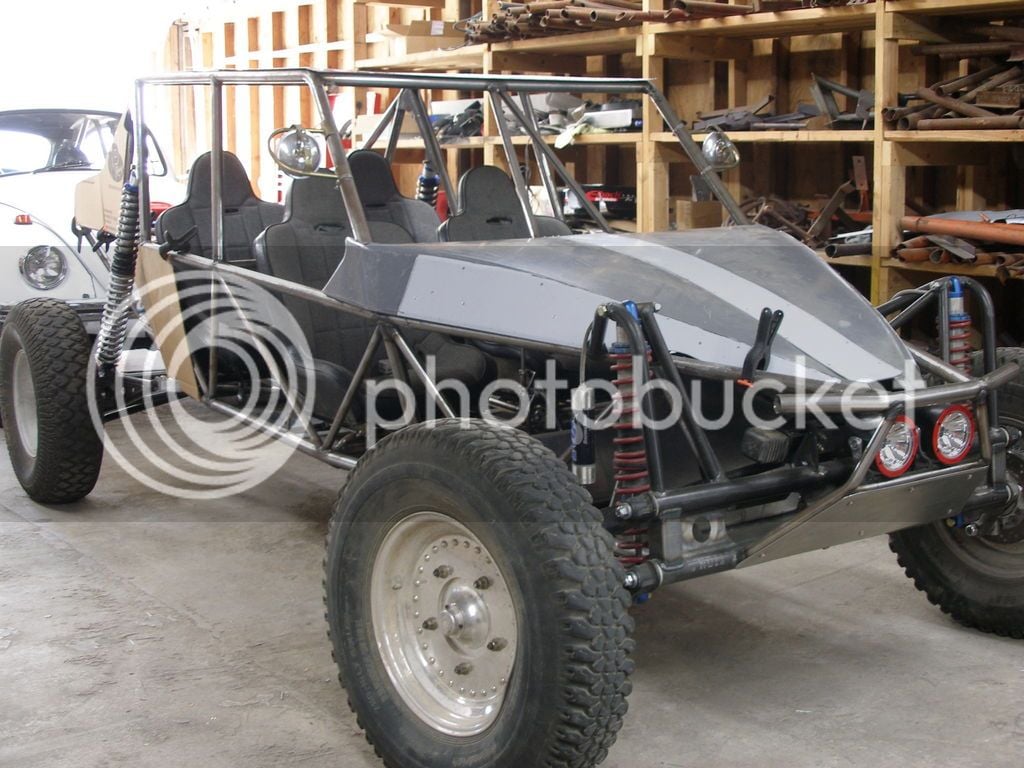 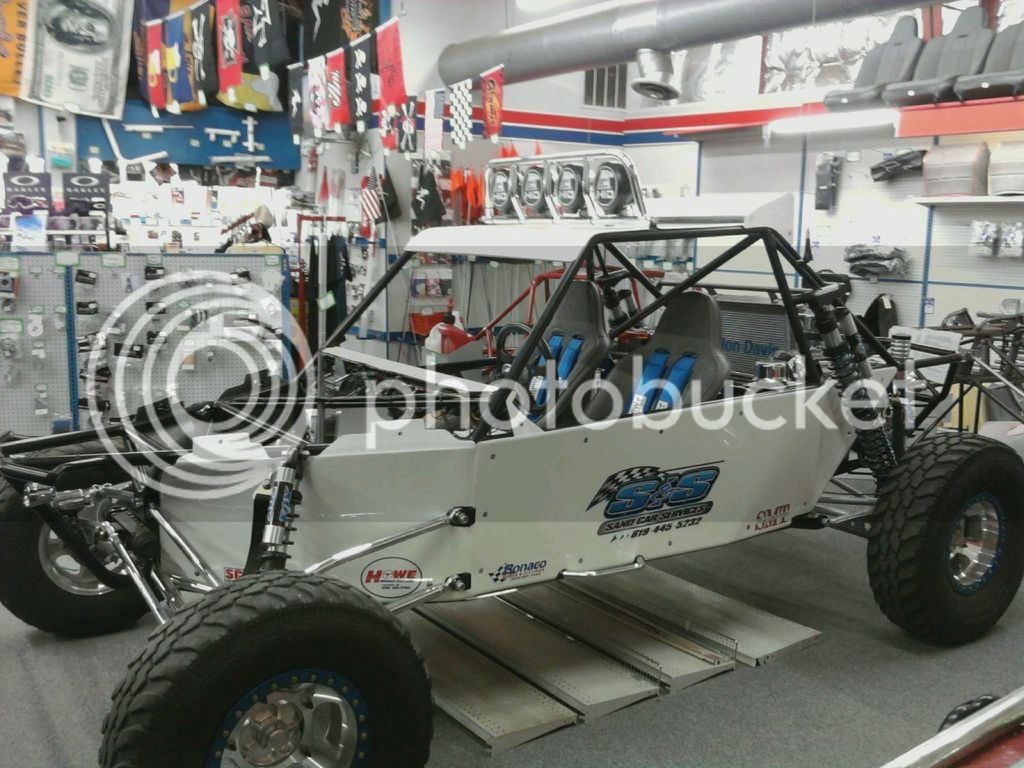 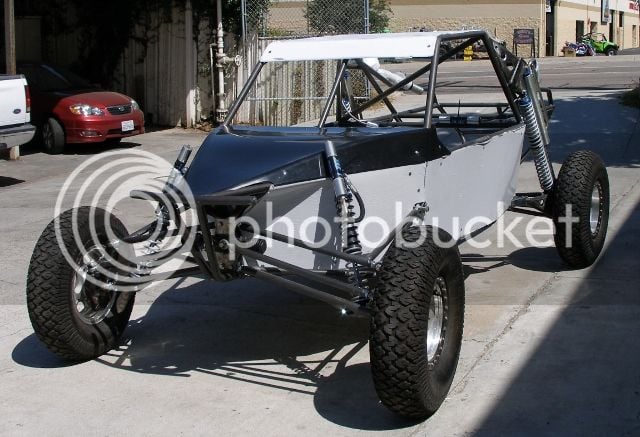 Last edited: Aug 25, 2016
"If off-road racing is outlawed only outlaws will race off-road."

Pete Corwin (Got Sand? and now Got Sand Performance) worked for Roger Mears , then moved to North Carolina for a short stint at Hendrick Motorsports (Jeff Gordon, Jimmie Johnson) but hated the fact he was only building seat belt mounts or stupid stuff like that and felt he was not being used at his full potential. He went back to the West coast and started at Chenowth (w/Sammy). Pete was selling his t-shirts at the sand dunes on the big weekends and this was when the long travel 4 seaters were taking off. He talked Mike Thomas into letting him design and build a 4 seat buggy for the desert/dunes. This was the same time as the release of Bob Gordons Millienium single seater was being built. Pete was also in charge of that build so he had a full plate. The 4 seater was to be a little different from traditional because it used a-arms in the rear... My old 4 seater car looks like a Chenowth Exodus because Pete designed it. I told him I didn't want the a-arms in the rear because for the desert I believed the standard trailing arms work better. It was a fun car and i miss it, I need to get another 4 seater.
All I want to hear out of you is “speed zone”, “we’re on fire,” and “I got the fat chick.” Zambo
N

Rory, thanks for the history lesson. Pete's name sounded familiar, but I did not know if it was from his own "Got Sand" stuff, from him helping you on some of your other builds or where? Sammy talks about still seeing and working with Ron Hemphill. I guess Ron has an adjustable jig to build rear trailing arms. He can build 1600, 3X, 5X or any combination with the same jig. Sammy uses Rons jig to build his rear arms. Ron too was at Chenowth with Sammy and I'd assume Pete.

How many remember the Chenowth shifter? NIKAL said:
How many remember the Chenowth shifter?

NIKAL said:
Rory, thanks for the history lesson. Pete's name sounded familiar, but I did not know if it was from his own "Got Sand" stuff, from him helping you on some of your other builds or where? Sammy talks about still seeing and working with Ron Hemphill. I guess Ron has an adjustable jig to build rear trailing arms. He can build 1600, 3X, 5X or any combination with the same jig. Sammy uses Rons jig to build his rear arms. Ron too was at Chenowth with Sammy and I'd assume Pete.

How many remember the Chenowth shifter?

They are good shifters but we had one break in our 1600 car at the July more race. The heim exploded. lol
Maximum Attack.
G

Can you get me in touch with Sammy? I need parts for my Chenowth
C

Hi, I have a car that i purchased, i was told it was built by Sammy and Ron Hemphill. Can you please give me there phone numbers so i can contact them for info. Thanks
D

Todd, I too am looking for info on some of the components on my Exodus. Mainly looking to see who's hood and dash was used. I just picked up a Chenowth exodus, does anyone know where I can get a windshield like the one above?

Kkeenan said:
I just picked up a Chenowth exodus, does anyone know where I can get a windshield like the one above?
Click to expand...

Welcome to the club. I've been asked that a bunch and sorry to say, I don't have an answer.
Stuck Throttle Films