Why dont more guys run them on their street legal vehicles? It seems like they are just used on vehicles that arent street legal or just single purpose built for the desert. With the money alot of guys are spending on their daily drivers or even play toys that are street legal, they dont run them.

They look red neck behind the cab and thats the only place you can mount them with a windshield. The lights will reflect off the windshield if you mount them where they are soposed to be and cause a whiteout inless you spend countless hours creating a neat looking shield. Another reason is there is not a good way to cut through your cab and make it air/water tight causing wind noise on the freeway and other stuff. I have thought out the pros and cons of doing this to mine and this is what I have found. It is much easier to mount lights on the front bumper.

I don't know about the laws in OK but in CA anything above the hood has to be covered when on the road.
D

all auxillary lights are saposed to be covered in california.

I don't want a light bar in the back of the cab, it limits the light to way way down the road, unless you mount them higher, which gets rediculous...

Lights mounted right on top of the windshield cause a lot of glare on the top of the hood (old school, we would paint the hood flat black...)and as mentioned hard to seal up...I'm not cutting up my 2004 truck to mount a front light bar...

I also barely fit in parking structures, I do fit, but it's getting close(I just installed 35" tires over my old 33") There are several places I go and want to have some were to park...

I run 3 lights on a front bar, 2 driving beams and the center one is a pencil, they work together as a system. I don't race my truck, and at fun or pre-run speeds I still don't over-run my present light system...I'll be doing HID conversions to pick up more light...which I'm sure will be suffecent...

I agree there are too many issues that hinder that setup! I also run three up front two euro and center pencil! I might step to four lights adding a flood to the mix in the middle to have a full array. Might look a little diferent but it's functional.
thecarlisuspension.com 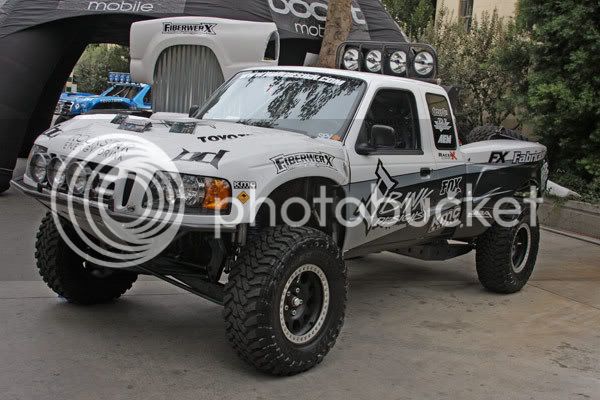 You can see the electric actuator in the middle that it down and tucks the rack away nicely between the back of the cab and the rear LED spoiler enclosure. 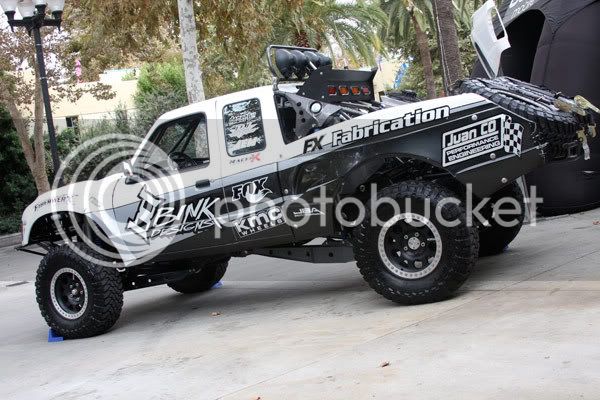 This truck had no adjustment built in to the rack but worked great and really lights up the desert. 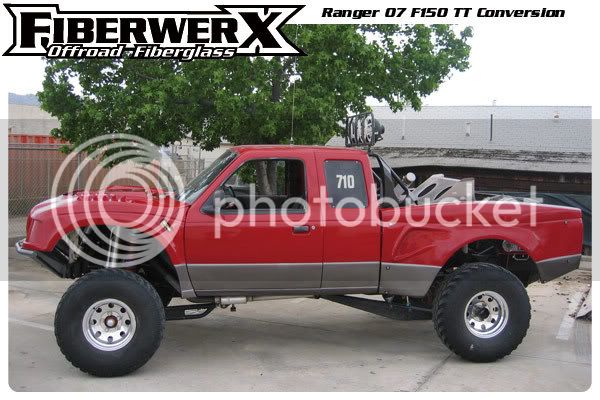 Another Street ride with a full rack of lights. 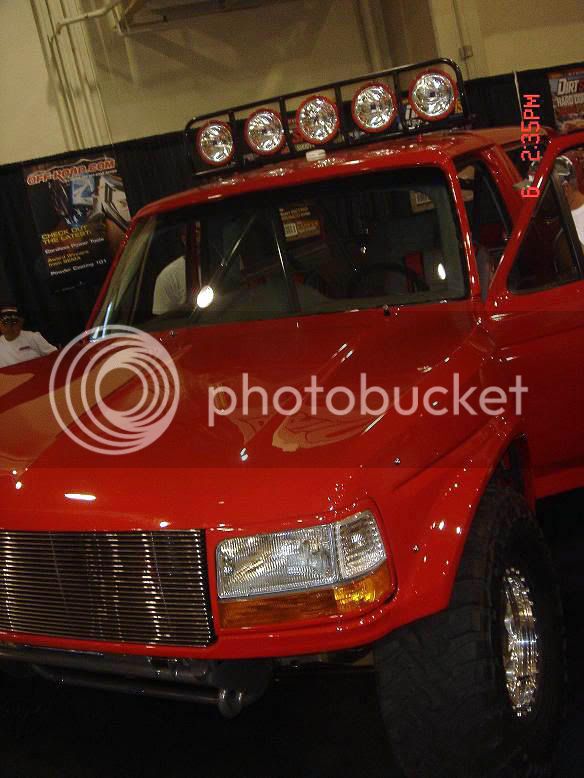 These are all purpose built rides that see alot of street time. There is absolutely nothing wrong with racks on the rear of the vehicle and the lights do the job required just fine.
I have seen several off road vehicles with wind shields and light racks on the front of the cab. Sloppy has it on his daily driver / prerunner / race truck with zero complaints.
AMERICA BLESS GOD!
E

I was just wondering if it was bc of the mounting issues or other problems. I currently do work for Toyota and was thinking of designing a light bar that would attach to the front of the cab for the tacoma in a factory approved mounting location. It would have over 90 degrees of rotation to be able to aim slightly down and the fully up, bc i read that have to be pointed up in Nevada, while on the street. There would be no linear actuator but a motor mounted and sealed with an unequal length arm setup with a cantilever mount to get the rotation. My initial design and how i hope i can make it, you wouldnt be able to tell that it rotates. It should look just like a standard light bar with two support bars going off the back of it. Maybe it would be better to design it around mounting at the back of the cab???
E

Triaged said:
I don't know about the laws in OK but in CA anything above the hood has to be covered when on the road.
Click to expand...

Its Oklahoma! We run nitro in our mini vans! We have no inspection, call us rednecks, but we do have some advantages!

These are all purpose built rides that see alot of street time. There is absolutely nothing wrong with racks on the rear of the vehicle and the lights do the job required just fine.
Click to expand...

And if it works for you, that's great, but it's not for everyone...

In all truthfulness, I would like to have a 4 light bar right above my windshield with an actuator to run the bar flat to clear parking structures...but just don't see how to do so with out cutting into my perfectly clean cab...
E

loufish said:
And if it works for you, that's great, but it's not for everyone...

In all truthfulness, I would like to have a 4 light bar right above my windshield with an actuator to run the bar flat to clear parking structures...but just don't see how to do so with out cutting into my perfectly clean cab...
Click to expand...

What kind of truck do you have? Most people on this thread mention the glare off the windshield and hood, but most of the new high end cars built now, seem to have some sort of a winshield and are definately painted to the nine's and very shiny as well!

I am not saying that there is only one way that works you know. Just throwing out some suggestions and why it works for the application.


We have two Trophy Trucks with front mounted Light Bars. One is on an actuator that folds down.

Obviously no windows or steel cabs to worry about, but with enough creativity and know how, I am sure you could figure it out. Having everything done clean and functioning with no issues takes alot of work.
Good luck and think out a solid plan.
AMERICA BLESS GOD! 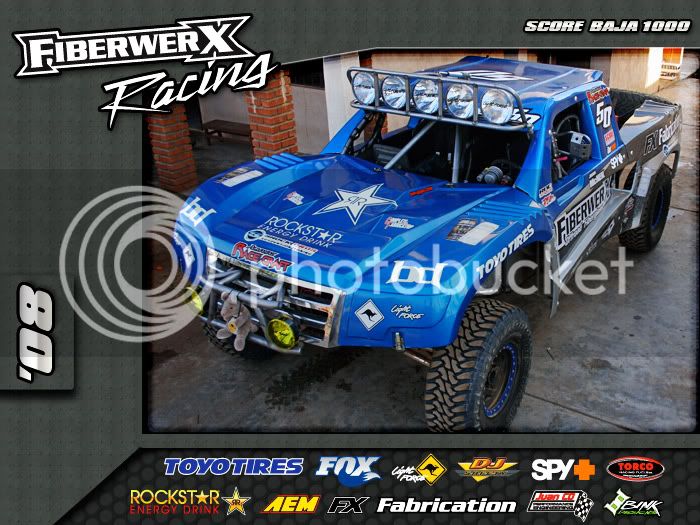 Here again in the lower left 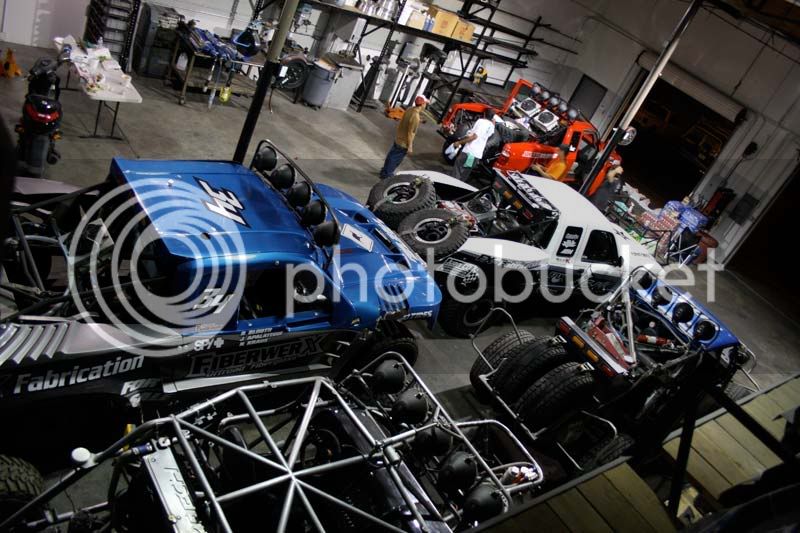 baja619 said:
You can kinda see the acuator mounted in the middle and connected to the roof tubes

Here again in the lower left

Why on the ranger is it mounted on the back? I didnt know if it was as simple as bc the windshield was in the front and you didnt want to weld tubes through the cab, or what specifically? This is a product i was wanting to have some R & D done before SEMA, so I would have some more reference if I had a chance to talk with some people more familiar with the industry than myself. Looks like thats not happening, its only six weeks away and too much on my plate right now. So i have all winter to put more and more thought into the design and hopefully have a prototype after the first of the year. My main obstical is finding the right motor/drive set up, so everything can be contained on the light bar itself. I know how I want it, just finding good components that can withstand the abuse, that arent going to have to be custom one off parts. My only concern with that is trying to keep at a price point where more than the 100k cars can afford it.

It sounds like you might be overthinking something that needs to be kept simple. On the trucks with the light bar up front, you would want to mount them a bit lower down the windshield to keep the glare down, but with this, Toyota would not approve of the set-up b/c of the lower amount of visibility out of the front of the vehicle. BTW, where are the approved mounting positions for the Toyota's?

Giant Geoff;692551 said:
I don’t mess around with balls, no joke. It’s expensive, and I don’t have the budget to play with them! haha.
Click to expand...

I have to agree. I also think having a product with mass appeal will never work with something mounted above and in front of the windshield. Unless it is some kind of roof mounted basket with a light rack built into the basket.
AMERICA BLESS GOD!
E

There is no way I could sell this through Toyota, too many safety issues. Im sure I am overthinking it, but if I wind up building it, I want it to be durable, able to be produced, and more importantly done right, so it does what people need. If this would be something that could possibly sell around 1000 units a year, it would be more than worth my time. It may not wind up going on street vehicles after im done, it possibly would be just a much cleaner set up than using a linear actuator. Thats where my thought came from, it big and just hangs out on the roof, saying here i am, look at me!

Oh and as far as the factory approved locations... Three people can keep a secret as long as two of them are dead! I should have some sort of privilages having to deal with over educated engineers trying to bolt on truck accessories!

Thanks for all the input, I think im going to do a little more research on Tundra and Ford's roofs to see what their mounting locations are if they have any. If it wont go on street vehicles, then i could make it more for the specific desert vehicles. Then you could just weld on your own brackets whereever you wanted, front or rear, but have full adjustment up and down w/o having the linear actuator sticking two feet back.

Just a thought but maybe it can just be built into a cargo rack.?
“They who can give up essential liberty to obtain a little temporary safety deserve neither liberty nor safety.” ― Benjamin Franklin
E