The 2009 Pharaons Rally will kick-off on the 4th of October, for Seven Days as usual, A.K.A the Rally of the Oasis, the route will take participants and teams around new Oasis that the rally has never visited before. over 12 Egyptian Teams will be taking part this year in the rally. Azzam El Farouqi the Old School Veteran, The Bright Star who finished 3rd in the Africa Race 2009 Abd El Hamid Abu Youssef, Ahmed El Sirgany who Won the 2009 Egypt Desert Challenge and Winner of the Diesel Category in the 2008 Pharaons Rally Karim El Zanaty too name a few.

Thanks for the post - it seems like as good turnout. I notice that there are a couple of Saudis competing as well. I remember hearing Ari Vatenen saying that the Egyptian desert was probably the most spectacular that he had raced in.
Mark

Desert Dog said:
Thanks for the post - it seems like as good turnout. I notice that there are a couple of Saudis competing as well. I remember hearing Ari Vatenen saying that the Egyptian desert was probably the most spectacular that he had raced in.
Click to expand...

I am very pleased of the Saudi's participation, its been since the 80's & early 90's when Saeed Al Hajry or any other arab was competing in the Pharaons Rally.

As for Mr. Ari Vatanen, surely the Maestro. The Golden years from 86 to 92 Saw the Porsche 959, and those power packed Peugeots, the 205 T16 & the 405 T16. Vatanen held pole position for 3 years in a row with Peugeot and then Citroen which was built on the Peugeot mechanicals carrying a Citroen body shell!!

Use Google Earth to View the 2009 Pharaons Rally Route

Thanks for that!
Rally Pan Am Riff Raff

The Alfa Romeo buggy certainly showed a clean pair of heels of the first day - 19:35 mins ahead of the second car of Roberto Tonetti in the Wildcat.

Any pics of the Alfa Buggy?
Mark

I am not sure about the results I am a bit confused, the 319 car is 4wd Buggy Cotel with a PRV engine, 302 is 2WD buggy also Cotel with an alfaromeo engine

anyways here are both 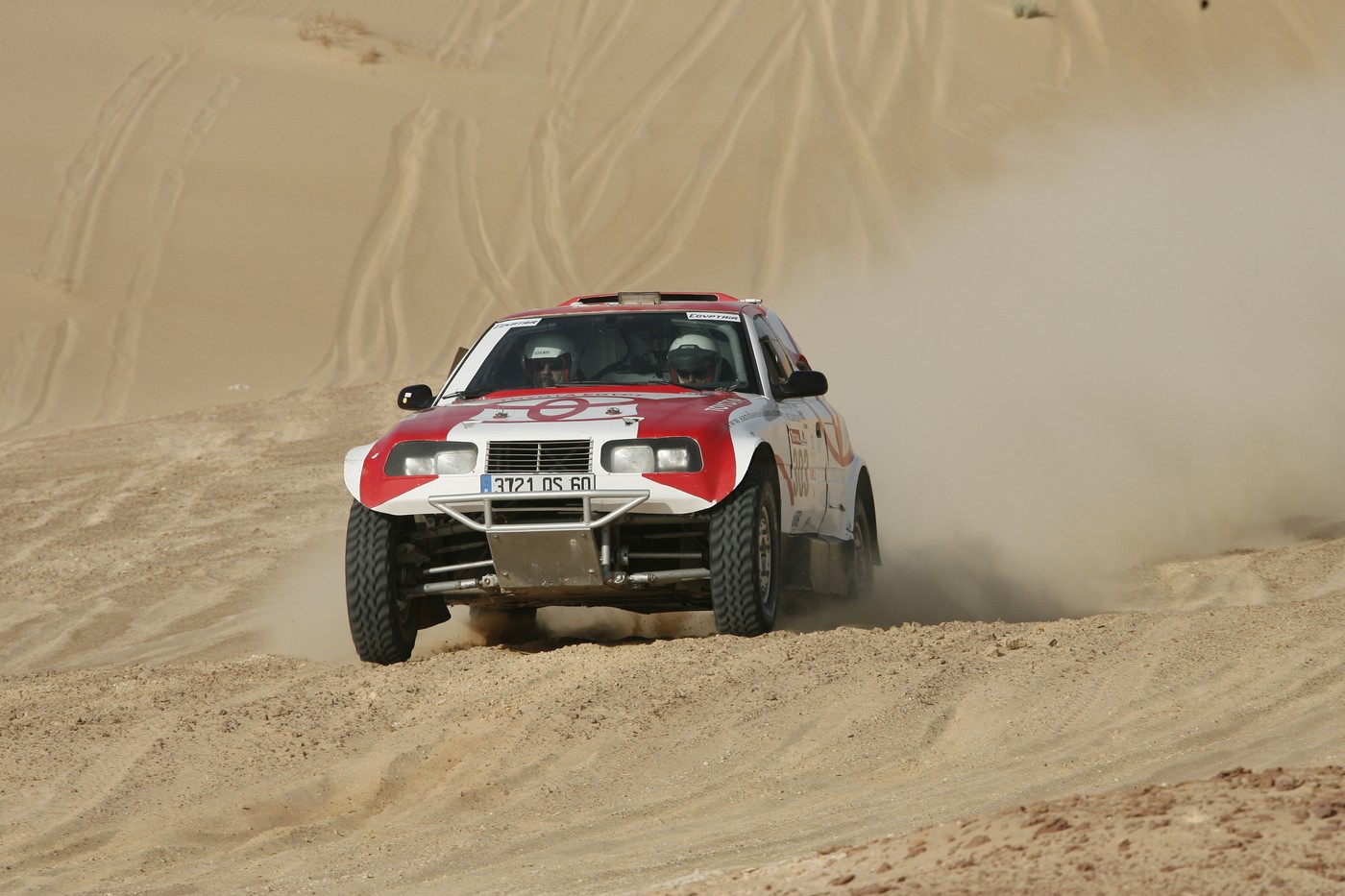 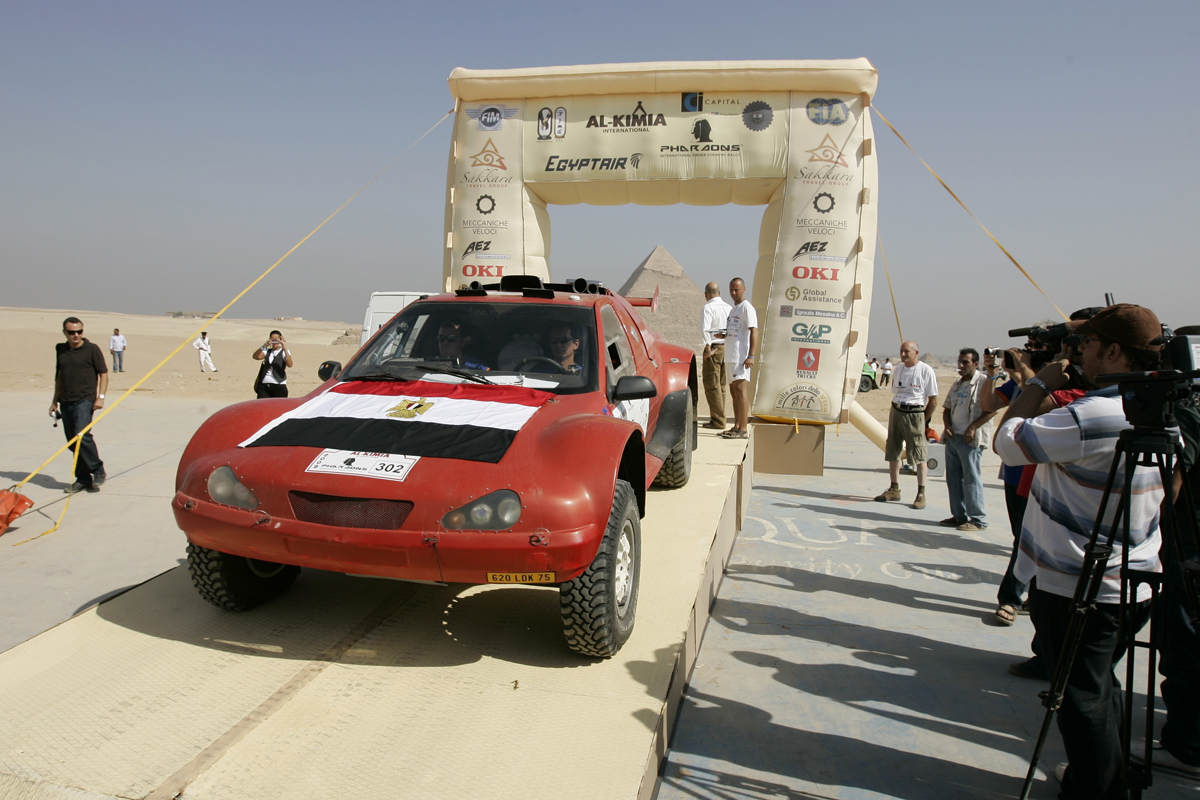 From the press releases:

The faster car among the nineteen on the starting point was the one of the egyptian Omar Hani (Buggy Alfa Romeo). The strong pilot already proved his excellent abilities and today begun in the best way his Pharaons with a total time of 3.18.55.

Behind him a trio of QT Wildcat commanded by the italians Roberto and Nicola Tovetti, separated from the winner by almost twenty minutes. Third place for Jerome Pelichet/Eugene Decrè in front of Michel Visy/Philippe Bourquin. On the fifth position cocluded the twins Aldo and Dario De Lorenzo on his Isuzu D-Max.

Tomorrow the second stop of the Rally will bring tha caravan from Baharija to Dakhla, the big paddy field oasis. 433 are the Km to cover, 386 of which of special test.
Mark

(I was there at the start line)

At the end of Day2 we find the three Bowlers in top positions, followed by the Saudis in their Nissan Patrol. Despite winning the first day, the Egyptian took a wrong turn and ended up in trouble. What a waste of a fantastic lead - he must be gutted.

"Among the cars the winner of yesterday, the Egyptian Omar Hani, had some troubles : he goes the wrong way immediately after the start, crossing a hill that he should surround and letting Jerome Pelichet surpass him. Attempting to retrieve broke in a hole the front suspension, loosing a lot of time.

All clear for Jerome Pelichet and Eugene Decré (QT Wildcat) that won the stop in front of the brand mate Roberto and Nicola Tonetti. Team Prorace italian crew passed on the top of the Over all with almost three minutes on the French/Swiss. Michel Visy/Philippe Bourquin completed the today’s hat trick of the safe english cars, even with a detach from Pelichet of nearly a half an hour.

Are anyway on the thirth position also in the general score. Fourth place for the strong egyptian Abdelhamid Abouyoussef, fifths in the over all preceded by the Saudi Al Muhna/Alsanad, today on the fifth place.

Tomorrow lay up for the North for the thirth stop, the Dakhla-Abu-Mingar, 356 Kilometres."
Mark

Misfortune hits Lopez: after have nearly reached Despres, landing after a leap, his motorbike turned off and he attained to restart it just thanks Franco Picco’s help. Despres win the stop with only 34 seconds on a stratospheric Luca Manca that follows him also in the Overall. Among the cars some problems make Pelichet and Visy delay, giving all-clear to Tonetti that is always more leader in the Overall league.

ABU MINGAR – The great hot, that until today reprieved the Pharaons 2009, binded today the Abu Mingar’s bivoac with temperature over 40° degrees. An enourmus sandy flat ground, stopped just by the asphalt’s dark line that connect Dakhla with Farafra, is tha scenary of the arrival of the rally’s thirth stop, a stop full of sensational development, beginning with the motorbikes where the Overall’s leader Francisco Lopez, after a bad landing from a dune, didn’t attained to restart his motorbike. He did it just after two hours, thanks Franco Picco’s help. Long standing Dakarian, Picco made bridge from his battery and Chaleco’s motorbike. A banal trouble to the starter motor relais tooked the fast chilean away from the fight for the victory. Before the CP3 gained more than one minute on the pacesetter Cyril Despres, who won undisturbed the stop.

Resounding Luca Manca concluded at just 34 seconds from the french. So Manca passed in second position in Overall with a delay of eleven minutes from the french. Thirth stop place for the polish Jakub Przigonski, in front of the two Aprilia of Alex Zanotti and Paolo Ceci. The two pilots stopped for a few minutes, trying to help Lopez, than the instrumentation support of Zanotti cracked and he had to drive with one hand for 60 Kilometres. Sixth place for Oscar Polli, at last incisive after a few stops in which fever didn’t allow him to give the best. Excellent seventh position for Ivan Boano, at his first rally after a long militancy in the enduro. In the Overall league Despres commands with eleven minutes on Manca, Zanotti is thirth with twenty minutes.

Today, among the quads, the faster is the french Jean-Christophe Thamas.

« Elimination round » among the cars. Pelichet/Decré had troubles at the change during the first part of the special trial, loosing more than half an hour from the stage winners, Roberto and Nicola Tonetti. They are father and son and with the today’s victory they consolidated their position on the top of the Overall. Also Abdelhamid Abouyoussef, that probably was going to win the stage, was going very fast, but in the last part of the round shelved ending on a sixth place. Tonetti’s victory counter with the twins Aldo and Dario Di Lorenzo second place, arrived at ten minutes from the outriders.

Roberto and Nicola Tonetti are on the Overall top with 39 minutes on Pelichet and one hour and a half on Visy, while the twins De Lorenzo passed on the fifth position.

Tomorrow is the Pharaons 2009 Grand Prix great day : start in line, first of the motorbikes and then of the cars, in the Abu Mingar plane with two 28 Kilomtres rounds to cover before going toward North, direction Farafra. Two are the specials scheduled for a 428 Kilometres stage that will bring us in Baharija.
Mark

The three Wildcats are in the top 3 postions followed by the Saudis in Their Nissan Patrol (where is Spalind when you need him? Or does he just follow the winners).

The top 4 have not got any penalty points so anything could happen in the remaining days. The closest team are Rally Raid Egypt in their Desert Warrior but they have a 4 hour penalty which means that they need need the top 4 to screw up big time.

For those who don't know the Wildcat, this is what it's about - http://www.qtservices.co.uk/Wildcat.asp
Mark

The three Wildcats are in the top 3 postions followed by the Saudis in Their Nissan Patrol (where is Spalind when you need him? Or does he just follow the winners).

The top 4 have not got any penalty points so anything could happen in the remaining days. The closest team are Rally Raid Egypt in their Desert Warrior but they have a 4 hour penalty which means that they need need the top 4 to screw up big time.

For those who don't know the Wildcat, this is what it's about - http://www.qtservices.co.uk/Wildcat.asp
Click to expand...

Great you guys have been analyzing the rally, I just got back from an amazing dune'ish trip did over and caught the Rally at CP 3 on stage 2. Took some nice photos and the cheering was loud.

I was in Co-Piloting with Abu Youssef Driving in 2007 Pharaons Rally, here's a link to a 4 min vid made for our car. We happened to be lucky enough to be in a Hand built Buggy coming from the workshop of the famous Frenchman Hervé Cotel who has been racing in the Paris Dakar since 1981. Always in buggies he built. If you ever happen to wonder what this guy does for a living, well.... he is an Inventor!! The buggy we were in, was built in 1990, he raced with it 2 times in Paris-Dakar.

The Buggy Cotel has a V6 PRV engine 288hp. in the back (Rear Engine and not Mid) linked to a specially made SADEV gearbox, 5 speed manual non-synchromesh. It is 4x4 and not 2 wheel drive like most rear engined buggies. It has a double system of everything, just in case anything breaks down, you have a backup, and so it has 2 radiators with 3 fans, 2 oil coolers with a fan each, 2 alternators, 2 starter motors one on each side of the gearbox, 2 fuel pumps, 2 fuel filters, 2 water pumps, 2 hydraulic jacks one on each side of the buggy for easy tire change or when getting seriously stuck. The whole buggy weighs 1300kg. Double Coil Over Shocks & Wish Bones in the Front and Triple Coil Overs in the rear, Ohlins. It will do 0-100 in 6.5 sec. and top speed of 200km/h we reached 162 in the desert and 178 on asphalt, a bit scary though...

This machine was built by the inventor who had 27 years of trial and error in the Paris-Dakar and other known cross country rallies. So I must say that it is a forgiving car, it took lots of bumps and shakes and all sorts of jumps.

Great stuff Turbo,
But I thought I heard once that it was a renault UN-1 transmission converted to 4x4 with peugeot 505 rear diff,
since it uses a 3.5L PRV the FIA mandates a minimum weight of 1750 kg correct ?

Pharaoh XJ said:
Great stuff Turbo,
But I thought I heard once that it was a renault UN-1 transmission converted to 4x4 with peugeot 505 rear diff,
since it uses a 3.5L PRV the FIA mandates a minimum weight of 1750 kg correct ?
Click to expand...