What Could Be So Important?

endeavor I hate go fund me,thank you for offering what you are doing. Please send me 6 of the coloring books from the order I just made. Look for the Colusa shipping address. Please resell the others.
530 682 7037 if you have any questions.

Been scrambling'/mashin' to dig up old iTunes videos, yes way back to SCORE '05 San Felipe. Pistol Pete was sporting Speedway wrap in his TT #2. Start of race at MM6 (after Zoo Road?) at a big hole, chasing TT #5 (Travis/Marty Coyne) & TT #12 (Brian Collins). He was always a competitive driver in terms of driving ability, he just lacked the funds/Sponsorship to take it

to the next level

Latter was what I was working on for him we were both INDEPENDENTLY in touch with entities at DoD (Dept of Defense). DoD had called him, my old college alumni have a HEAVY presence in current Offroad Racing Technology (IRIDIUM based vehicle-tracking, Youtube distribution of video-content)

Here is the video from Geiser Shop '04 Xmas Party, he was owner of Speedway karting

Like Jesse Jones, they were Phoenix area residents who got personal attention/service from the Geiser Bros. Jesse was also in attendance, just glowing over his truck being built

It was a really COOL party, Rick/Jeff are great people & accommodated my requests. I gave Rick some early 90's Offroad Racing swag (posters, etc), he gave me Geiser Bro t-shirt & cap. Pete was a really COOL dude, commanding an audience (he came across as a leader, see above video) -- describing the CNBC 2004 Baja 1K experience. Bobby Baldwin was involved (I believe he funded the CNBC TV thing).

Later on, Pete was manning the shrimp taco booth outside the Geiser Shop. Man, I can't believe this all went down 14 yrs ago! Lots has changed since then, lot of us have gotten older..LOL Pete looked youthful then, plus NO mullet!

Is that his daughter in the below pic? Which one?

9 months ago at Cameron Steel's Baja HQ grand opening. My photo of Pete, on the live webcam panel, left table... Later I chatted with him, an easy guy to talk to. Told him I was a fan of his Truck Night in America show. 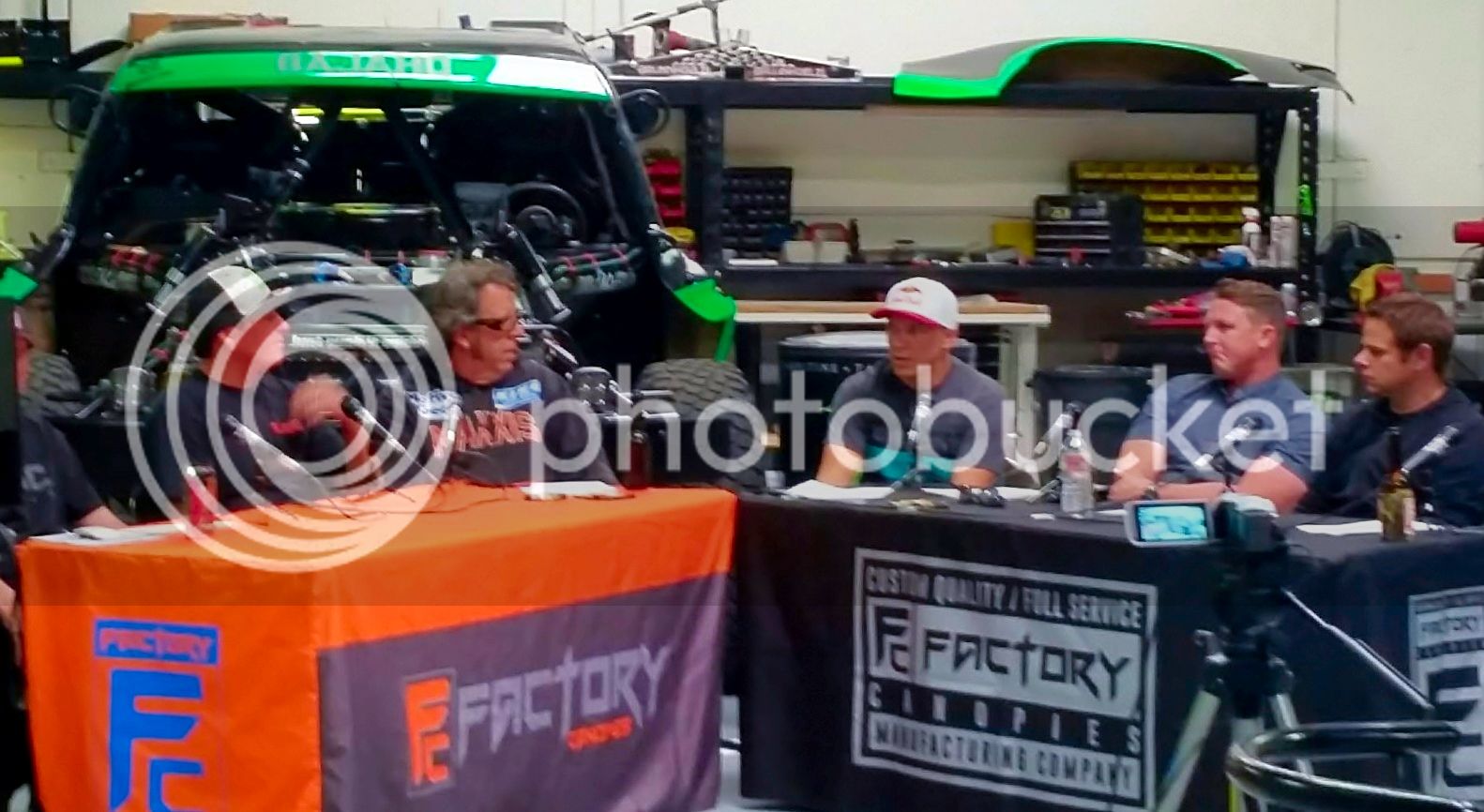 So much Baja... So little time! My book: Baja California Land of Missions www.oldmissions.com My site: www.vivabaja.com

David K said:
9 months ago at Cameron Steel's Baja HQ grand opening. My photo of Pete, on the live webcam panel, left table... Later I chatted with him, an easy guy to talk to. Told him I was a fan of his Truck Night in America show.

Im so glad we did those shows last year with Pete. He had always wanted to do a show like that again and he was a big reason I even started doing them. It was his idea to do the San Felipe preview show.

Interview at CORR '07 LAC (LA Pomona) where he was hired as commentator. Right after, he took off for Baja to pre-run the Baja 500 (trailered "Harbor Freight pre-runner"):

If they have a PayPal, money can be sent friends and family with no fees on either end. Just a thought.
"I'm Growing Older But Not Up"

Cheers to a guy who walked through life with his right foot mashed to the floor!
Dave

Someone made a video tribute to F1 drivers

Did You Know You
MakSim

Eva Cassidy was 1 of the greatest unknown vocalists. Died of cancer at 33.

"Our little wonder in the desert"
-- Ryan Arciero

Played this at my husband's funeral last year. My heart still cries his name everyday. I can only hope that someday I will hold him in my arms again. Where troubles melt like lemon drops and the clouds are far behind me. I will be looking for him.
Click to expand...

Pete's life should be celebrated

He lived everyday to the max, especially with his passion for Offroad.

"HE WOULD NOT GIVE UP. I was proud of that N. Vietnamese soldier. He gave me a living example of what a MAN should be. If you have a BELIEF..a REAL BELIEF, you should be willing to DIE FOR IT"
-- Charles Strong, Army Specialist 4, Vietnam conflict, "The 'Bloods of Nam" PBS documentary

America is slacking (millennial crap), but it's the FAILED LEADERSHIP (politicians, gatekeepers, etc) who have created a vacuum:

Deep down, Pete was a hero. He was a leader (who commanded respect, audience, attention). See that Geiser Shop '05 Xmas video

It's BEAUTIFUL, I'T MADE CRY, REMEMBERING MY HUSBAND THAT PASSED A YEAR AGO, AND MY PARENTS THAT I HAVE LOST AS WELL! I REMEMBERED PLAYING THE VIOLIN WHEN I WAS A YOUNG GIRL!
Click to expand...

I just can't believe it. He's probably thinking the same thing I am, "Killed by a golf cart? WTF??"

She becomes her music. It washes over her and sinks into her skin. Her connection with what she is playing makes me so envious of the sheer passion of what she feels when playing her music. A joyous, talented, passionate pianist of the highest order. Play on angel, play on.
Click to expand...

^^^ Remarkable parallel to what Pete was doing ("playing with Desert Toys") in Offroad Racing.

"It washes over him & sinks into his skin. His connection what he is playing make me so envious the sheer passion of what he feels when playing his Craft. A joyous, talented, passionate artist of the highest order. Play on artist, play on"

This should be played at the conclusion of his (well attended) memorial, as people are filing out

scottm said:
I just can't believe it. He's probably thinking the same thing I am, "Killed by a golf cart? WTF??"

Sb4, this would make an awesome T shirt, and a great way to raise money. Who can make it happen? I will buy 4 right now.
Click to expand...

Not sure who actually owns the design . It was posted on Instagram by TR Beadlocks so maybe get ahold of them somehow

sb4pro said:
Not sure who actually owns the design . It was posted on Instagram by TR Beadlocks so maybe get ahold of them somehow
Click to expand...

It's on Pete's web page too: RIP Pistola! Good dude that did it his way and didn't give 2 poop what anyone thought... Prayers to him and his family, peace brother...

endeavor said:
Thanks -- I throw this out there. Starting today, I will donate 100% of the sales of this coloring book for the next 30 days to this fund. So if we sell 100 of them over the next 30 days, I'll donate the entire $895 to the fund (they are $8.95 ea). No limit to number sold. Vintage Off-Road Racing Coloring Book
Click to expand...

Just bought the coloring book. I know a couple rad kids in Idaho will enjoy that. good on ya. I am still shocked about the news on Pistola. I respected his crazy-arse opinions and gnarly hair. I thought I had a lot, but he had me beat. Can't believe he's gone. I know what it's like to be there when your dad goes too early and those girls are gunna have a rough go of it. I still have dreams, but most of them good now, not so bad (9+ years).

race like hell up there Pete, and look up my dad if you need a crew chief!