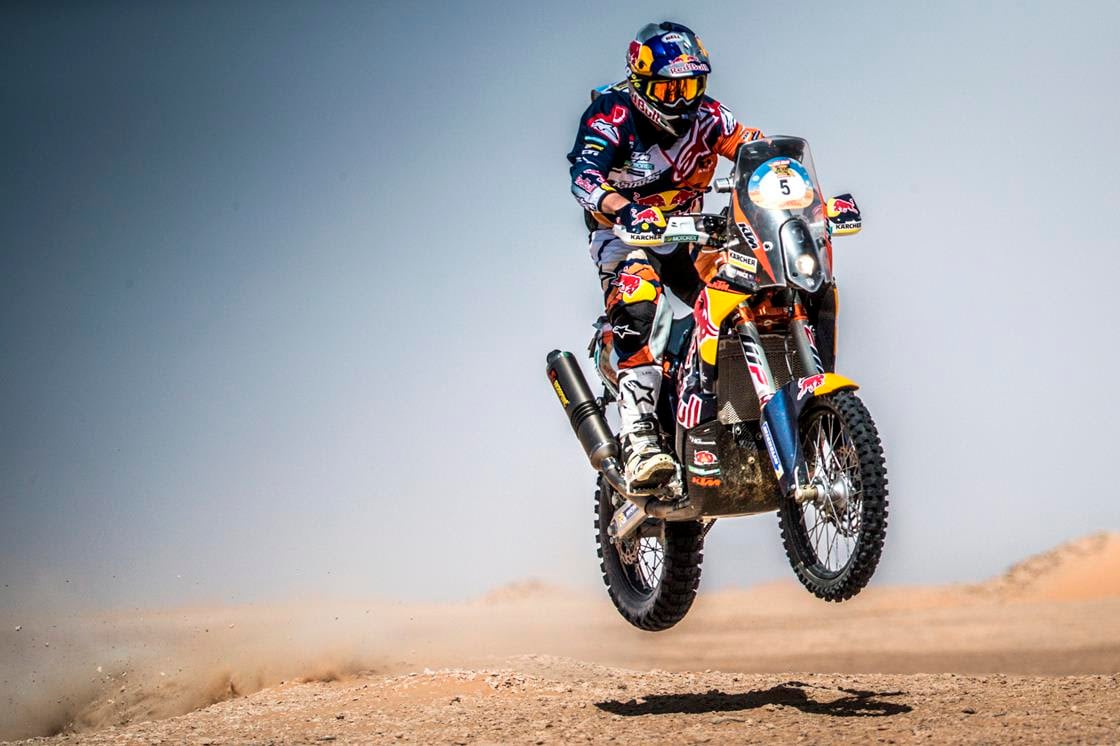 There’s no time to rest for the Red Bull Desert Wings as their mighty machines are ready to be wheeled out for the second time this month. After a thrilling start to both the FIM Cross Country Rallies World Championship and FIA Cross Country Rally World Cup in Abu Dhabi a couple of weeks ago the squad have now set up shop in Qatar. The next piece of business for the best offroad riders on the planet to take care of is the extremely hard to navigate Sealine Cross Country Rally.

With 1,650km of ultra-tough desert terrain to be negotiated over five days the event in Qatar promises to be a real test of endurance for both man and machine. Toby Price is the reigningDakar Rally champion and winner of the recent Abu Dhabi Desert Challenge so looks like the man to beat out in the desert. The Australian rider arrives in Doha alongside fellow Red Bull KTM Factory Team member Sam Sunderland who picked up second place in Abu Dhabi. British biker Sunderland will be hoping he can turn the tables this time out.

The UAE’s Mohammed Balooshi, also on KTM machinery, delighted the home crowds with fourth place in Abu Dhabi and will be aiming to show his desert expertise once more. Meanwhile, Portugal’s Hélder Rodrigues of Yamaha’s factory team will look to avoid the mechanical problems that prevented him from securing a top 10 finish in his last race.

It was mechanical mishaps that also stopped Chile’s Ignacio Casale from stamping his authority on the first quad race of the new cross country campaign. With a touch more good fortune in Qatar the 2013 Dakar Rally runner-up should be able to park his quad in the podium positions.

In the car race the main attraction is without doubt Qatar’s two-time Dakar winner Nasser Al-Attiyah and his French co-driver Mathieu Baumel. The desert racing duo are not only the defending FIA Cross Country Rally World Cup champions but also won the last edition of the Sealine Cross Country Rally. They proved that their Toyota Hilux is capable of winning results with their triumph in the Abu Dhabi earlier this month and they’re after maximum points again, this time in front of Nasser’s home crowd.

Stiff competition in the car race will be provided by a high-class field which includes Dakar stalwarts Marek Dabrowski and co-driver Jacek Czachor. This Polish pair will also be at the controls of a Toyota Hilux as they continue to represent Team Orlen with distinction.

With five days of unpredictable racing ahead of them it looks like we’re all set for a dramatic week for the Red Bull Desert Wings in the dunes of Qatar.

Toby Price: “In the last race we had to push from start to finish and I can see things going the same way in Qatar. That’s what I enjoy most, when you really have to work hard to earn the result. It's still early in the season so it’s important to just keep going this way.”

Sam Sunderland: “We got a nice 1-2 for the team in Abu Dhabi so that was a good result. Now we have to do it all again in the next round in Qatar. It was really important for me that everything was fine with my injured leg in the last race and now we have that first event in the bag.”

Hélder Rodrigues: “I’ve been focused on this race in Qatar since reaching the finish line of the first race of the season. We are working on developing the bike all the time and this season is all about getting as prepared as possible for the next Dakar Rally.”

Ignacio Casale: “In Abu Dhabi I had engine trouble on the first two days but then I was the quickest rider on the final three days. I ended up in fourth place so got some championship points and now I arrive in Qatar aiming to move even further up the standings. The hope is to improve in every race we do this season.”

Nasser Al-Attiyah: “I was really happy to win the Abu Dhabi Desert Challenge because it’s an important rally and it showed that we can win one of the most difficult races in the world. We won four of the five stages and controlled the race from the beginning, if we can do something similar here in Qatar that would be great.”
You must log in or register to reply here.
Share:
Facebook Twitter Reddit Pinterest Tumblr WhatsApp Email Link
Top