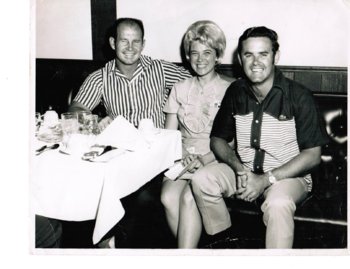 Been going through old off-road family photos - not sure if 1969 Mint 400 or prior Star Dust race. More to come soon. Parnelli Jones - Bill Stroppe prior to Big Oly - Unser bros - Al - Bobby . Word has PJ called them out to the desert on a bet. Someone may know more? #122 an early Funco - think thay called it a Wampuskitty. That may help with date era?

The first photos are from the '69 Mint. Parnelli and the Unsers raced in it - no idea if it involved a bet or not. PJ did not race in the Star Dust race in '68. #31 is a truck we call "Unser" for obvious reasons. "BajaBronco" here on the board found it and owns it. We have never been able to definitely determine it, but there's a good chance that #15 is the truck that Andrew (BajaBronco) and I own together.

Wow that is cool!!! Thanks for sharing. I love seeing old photos of the trucks like that. The Unser Stroppe Bronco is the one in my avatar photo and the Jones/Stroppe is, as Toddz said, likely the one in his avatar.

The race made a big deal of the Unsers and Jones in the race at the Mint that year. Both trucks got pretty well hammered that race with Unser/Unser rolling at least once the first day and Stroppe and Jones as well. I think Stroppe broke a rib or two in the roll and Bobby Unser got mad and went home (because Stroppe gave them the Bronco that was already 2 year veteran at Baja 67 and 68 and was one of the first Stroppe racers made - fairly worn out). Stroppe put Bobby and Jones together in the Unsers rolled Bronco and they rolled it yet again, finishing with the cage all squashed and I think only one headlight. 2nd or 3rd place. Contested due to driver change, but recorded as a podium in the history books. Jones' first finish in a Ford Bronco

Rigid Industries said:
Todd, did you guys get yours all straightened back out after NORRA? I shed a tear when I saw it. Silt Bed right?
Click to expand...

Yes - silt bed. Andrew is working hard on it and repairs are in-process!