What are you guys running and what kind of results are you seeing. I want more MPG mostly. I added a Bully Dog E3 and the extra power is great but would still like to see my fuel numbers increase.

As for exhaust, just something Cat back.

I have the MBRP Cool Duals, turbo back and the PSM Cold Air Intake. The combo of the two netted me a couple extra MPG, but more importantly for me, dropped my EGT's.
If everything seems under control, you're not going fast enough.
Mario Andretti
U

I am running a K&N full intake and a cheaper 5 inch turbo back exhaust. I am happy with both. The exhaust really helped the turbo spool up and made everything a lot smoother. I got the truck with the K&N so can't say how much that changed the truck. I do kind of want to go to a ump or xdi intake to help with the dust and sand.

Oh and the specs on my truck are:

suicidejockey said:
AFE Intake, and almost any 4" or 5" exhaust with a free flowing muffler will help ALOT, Also Some Upgraded Injectors help alot with Fuel Miliage
Click to expand...

Alex Paterson said:
I was reading about the Banks intake and how they feel its much better then anything out there and show numbers trying to prove this but doesn't always mean its true

As for exhaust, just something Cat back.

any thoughts would be helpful,
Alex
Click to expand...

Well here's our test data for you. We have 2 "intake" improvmets for your truck, the ram air intake (filter system) and the High Ram intake manifold (on the engine). This should also give you an Idea how these parts get tested

Flow numbers on the High Ram manifold with the heater grid: 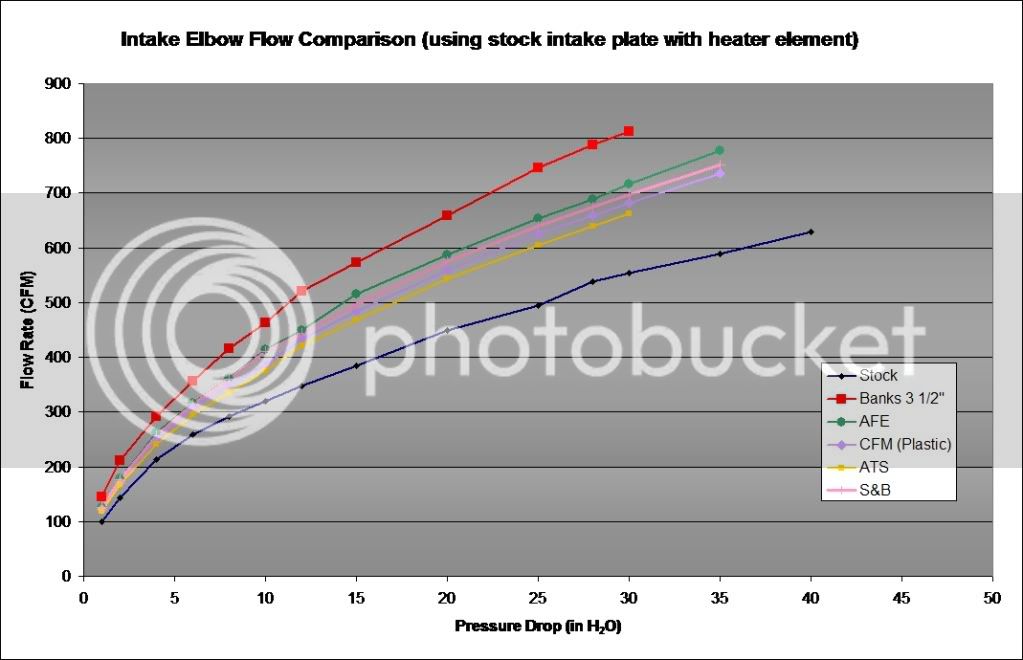 Flow numbers on the High Ram manifold WITHOUT the heater grid: 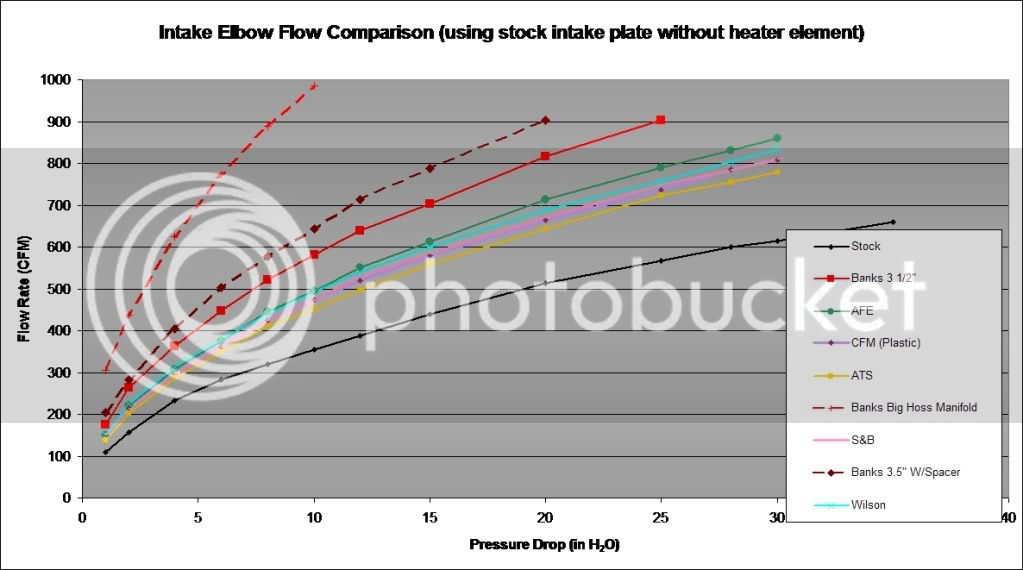 Test results on the intake (filter) system itself:
Overview Summary
We measured each intake’s effect on air density at the turbo compressor inlet. Intake temperatures will generally be higher than ambient conditions, but the more the system can duct cool air to the filter and preserve the cool temperature as the air is ducted to the turbo, the higher the air density will be. In addition, there will commonly be a pressure drop as air travels through the filter and the ducting due to any restriction that is introduced. If the design of the system can minimize the restriction and the pressure loss, air density will be preserved.

Test Setup
A 2004 Dodge Ram 2500 4X4 Quad Cab Long Bed with the Cummins 5.9L engine and automatic transmission was used as the test vehicle. A data acquisition system was used to measure vehicle speed via GPS, along with multiple temperature thermistors and extremely accurate pressure transducers. The total vehicle weight was approximately 19,000 lbs (including trailer). Tests were run in 2WD.

Testing was conducted on a moderate hill on the northbound CA-57 in the city of Pomona. Speed was maintained at 45 MPH until the vehicle was adjacent to a pre-determined start point on the road. At that point, the accelerator was fully depressed and the vehicle was allowed to accelerate while climbing the hill. Test data was observed at the same vehicle speed in all cases, with the engine at 2800 RPM, the point of peak engine power. This data point occurred between 60 and 90 seconds into the run—sufficient time to allow the engine to reach a stabilized operating condition.

Data Acquisition
Vehicle Speed, Engine RPM and Accelerator Pedal Position were logged to determine the load conditions and speeds. Temperature was measured using thermistors for increased accuracy. They were mounted to measure ambient temperature as well as temperatures at the filter and compressor inlets. Pressure transducers were used to measure pressure in the same locations. The intake system effect on air density was evaluated by comparing the temperature and pressure of the ambient air condition with the temperature and pressure of the air at the turbo compressor inlet.

All data presented assumes an ambient temperature of 77°F and ambient pressure of 29.24 inches of mercury, per SAE standards.

Banks Ram-Air
Replaces the stock setup with new housing, filter with 7.5” outlet, lid & ducting system made of cross-linked polyethylene & polypropylene, all the way to the inlet of the turbo compressor. Inlet to filter housing is sealed to the fender air duct with open-cell foam.

AEM Brute Force Intake
Replaces the stock setup with an aluminum tube, dry filter & a sheet metal heat shield. Filter has a 4” outlet which mates to the aluminum tube.

AFE Stage I and Stage II
Both systems use a filter with a 6” outlet. Stage I leaves the filter exposed with a sheet metal heat shield.

Airaid Intake System
Quick-fit system filter mounts to an adapter that mates to the factory inlet duct with a 3.75” inside diameter.

Bullydog RFI
Sheet metal enclosure with an opening toward the factory fenderwell opening. Filter is mated to a section of elbow tubing that mates to the factory bellows & silencer.

Volant Cool Air Intake
Oval-shaped filter housed in an enclosed box with three openings: one at the bottom, one toward the front & one toward the fender.
Elevated ambient temp 50.5° F
Lowered air pressure 3.2%
Combined result: air density 88.2% of ambient
2.0% worse than stock
7.8% worse than Banks

im running the S&B cold intake, and a flowmaster from the cat back.