Is there any issues or things I should be aware of when mounting a radiator in the rear of my truck?? Do I need a x-tra water pump or will the stock pump handle things ok...Basically im worried about the water circulating properly. Thanks in advance

you could use an electric pump. or get an aftermarket high flow pump.
Mike McClintock

you could use an electric pump. or get an aftermarket high flow pump.
Mike McClintock

This is for a race truck I am assuming. Cause I have been told that its not the greatest idea if you are not pulling out your front and rear windows so that it is still getting enough air. If you are keeping your windows then I would recommend an electric water pump and a heavy duty electric fan. Then remember that you may need to get a higher output alternator (sp?) if you are also running lights.

Look at me, I can fly

I wondered the same but recently mounted a trans cooler in back with fan tilted so the air coming down over the cab will get caught. I am going to test it there with a temp guage and move it if needed.

its for a 1400 mdr class race truck...front window has to stay but im gonna pull the rear and the side windows out..also i was gonna make scoops to gather some air flow

keep it in front

Aren't you suppose to mount the radiator the other way with the fan on top instead of on the bottom? I don't think that I have ever seen it set up that way before.

See ya in the dirt!
Baja Bound

there are sucker fans and pusher fans. I am assuming that is a sucker fan.

Look at me, I can fly

yes it sucks air up!

I really don't think that you need the cooler way up there like that. That fan flows plenty of air, probably over 1000CFM which is always going to be pulling more air than the amount of air that is being 'forced' over the top of the cab at most speeds. I'd be willing to bet that the air in that location is pretty dead at that location too. One thing that comes to mind is all the empty beer...or uh, pepsi cans in the back of a truck that have a tendency to "float" around at about top of the bed height and a foot or so back from the glass while you're on the freeway. Don't know how to explain it....I just now I've watched lots of light objects in the rear view mirror while driving thinking 'damn, I hope that doesn't blow out' and they usually don't
I guess to really know the airflow at that point you'd need a wind tunnel.....or a friend willing to stand in the bed of the truck at highway speeds!! But my gut (and it's pretty big!) tells me the airflows probably negligible there.
Of course all of this goes out the window if you have it there for other reasons! Ok, nuf rambling. I'll go away.

I have layed in a bed going about 80 down the freeway and i know that at the throughout most of the bed there isnt hardly any air circulating around at all.

You gots to pay da cost to be da boss. - Snoop
Life Is What It Is, And What It Is, Is What You Make It.
S

Well I am no expert but thought it would be more likely to get more airflow than just flat and is more out of the way from rocks. With both windows open and back middle window open or out when I race it might get some more airflow that way also,maybe?

Yea i am sure it will work cuz it is higher up than where i was laying and it also sucks air in.
you don want to have to do this.
<-------

You gots to pay da cost to be da boss. - Snoop
Life Is What It Is, And What It Is, Is What You Make It.
M

Hey dude, I just got done with mine and it works great! I just ran flex hose to frame mounted 1.25" exhaust pipe to nice and big chevy cross flow with a big 16" electric fan. The motor is a awsome 390gt and this set up keeps my truck at 175*. If needed, I'll send some pics.

What we have done in the past was tie little pieces of string everywhere. Then drive and have someone watch or video tape you. You will be amazed at what you see. In all reality, air is "lazy" which means it will take the easiest path of least resistance.
From my experience what sounds like what will happen usually doesn't. Although you would be surprised that if you look on a wing of an airplane there are a bunch of little air diverters over the top side of the wing. I have tried that too with great success and remember less is more in this situation.

Good luck with your project.
"No good deed goes unpunished"

I have a rear radiator on my v8 ranger and i have all the windows in... i dont have any overheating problems. i have the stock 5.0 water pump and have the radiator ontop of the rear axle.. I use a Ford Tarurus cooling fan...mine acutualy is the mercury sable version its a 19in fan instead of a 18in fan. 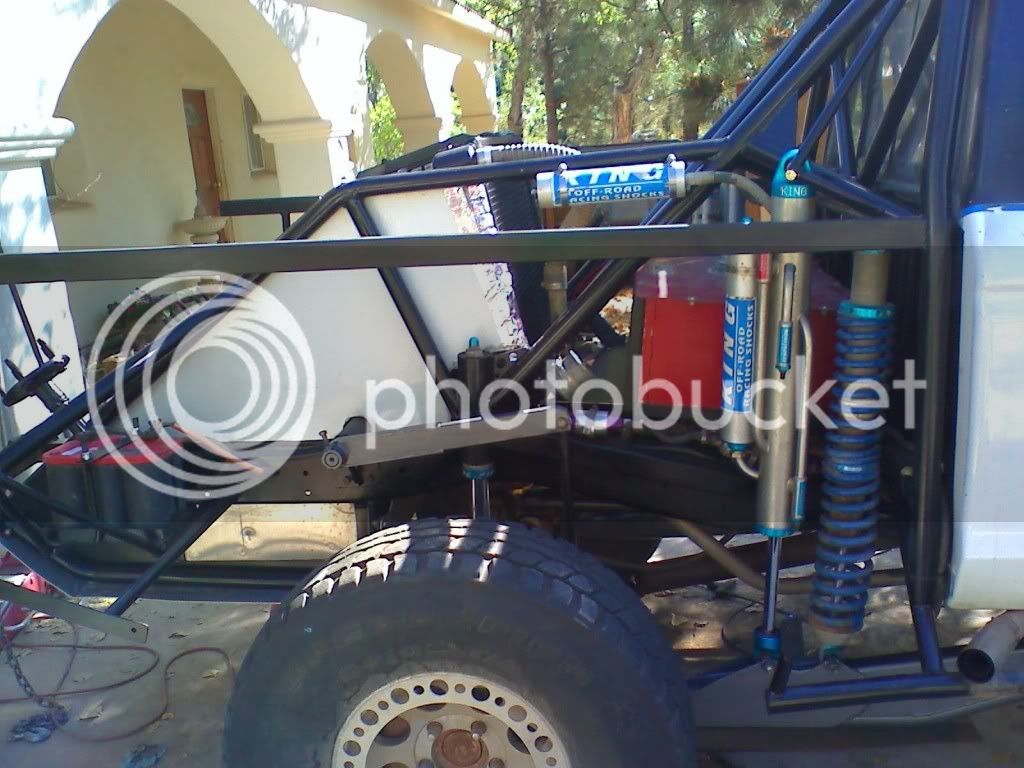 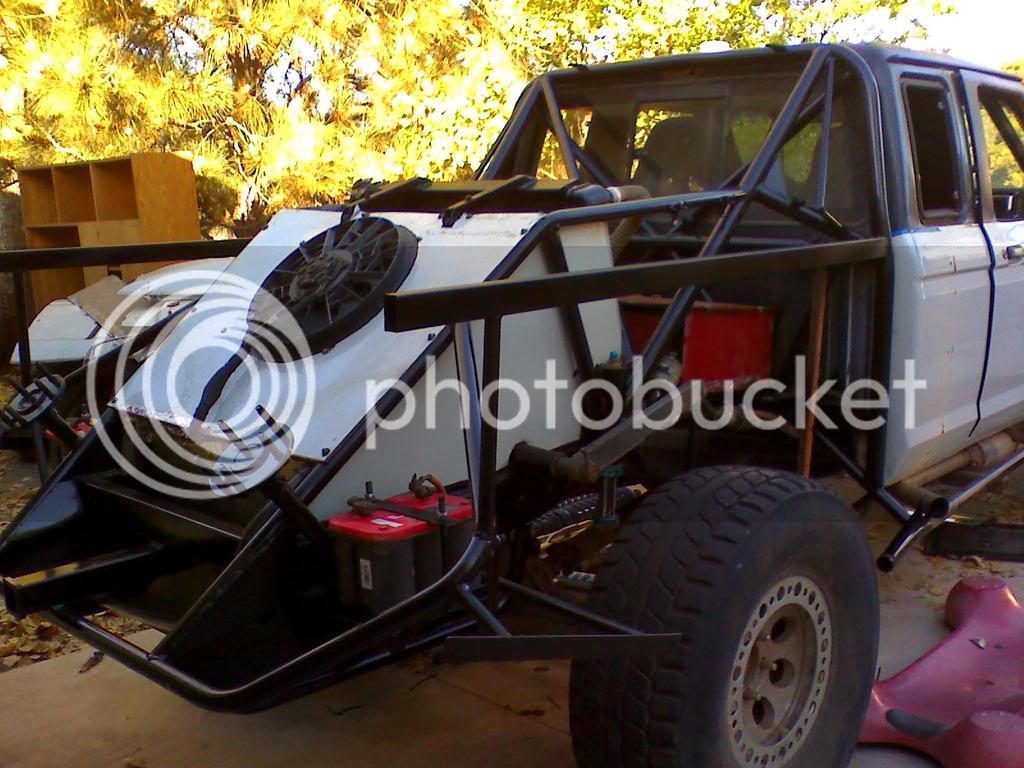 the top cover for the radiator is not on right now but there is a wing that holds the tail lights and helps draw air...
'so what do you think of the truck roxy' 'its not a trophy truck'
http://www.race-dezert.com/forum/showthread.php?t=37422

A taurus fan is i think around 2000 cfm and its a dual speed.
But having a single electric fan with no air flow is very risky if this thing fails it can cost you a race or worse an engine.