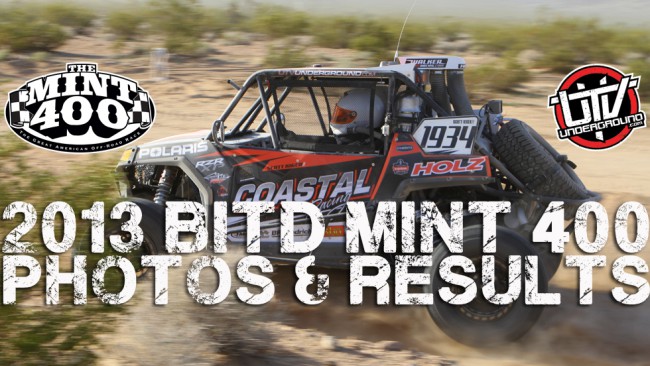 Mike @ pit b said:
You think Mad Media cares about the coverage of the race on race day?


They only care about the coverage of the race for when it airs on tv...... 9 MONTHS from now, just like last years race.


Go to the MINT400 site and find information about where the race actually is. WAFJ!!
Click to expand...

actually this years race will be broadcast in May I think and it will be 2 hours instead of 1 hour.... hate on..

menzies around 83 marker final lap
I

FWIW... New spectator area at the gravel pit was SICK! Felt like CORR Chula Vista almost but with TT's and 1 cars going off! Was pretty rad! Course is gnarly but weather is perfect. Tons of spectators.

no sign of jones yet. 6 mins since bryce came by.
I

JoeyD23 said:
actually this years race will be broadcast in May I think and it will be 2 hours instead of 1 hour.... hate on..
Click to expand...

Oh, so only 2 months later.


So the race will be mostly forgotten instead of completely forgotten by the air date.
Don't bother me. I'm wasting potential.
Life's a grave, dig it.


So the race will be mostly forgotten instead of completely forgotten by the air date.
Click to expand...

Can't please everyone I guess. I have been lucky to see the effort they put in to make that show. I am willing to wait.
W

Not hatin on the movie or the people making it. Thank you joeyD for posting a link to UTV results.

Hating the fact that live coverage bites.
Last edited: Mar 23, 2013
If you find something worth doing, find the ability to do it right first.

Sheeze man even LOORS doesn't air live and it's short course and its still got a couple week delay. Man cut the guys some slack.

In desert racing you end up with literally thousands of hours of footage. They gotta watch it all, figure out the editorial direction that the footage best fits and cut it down to like 100 hours. Watch the 100 hours and try to cut it to like 10 hours. Now watch it all again and try to narrow two races covered in thousands of hours of footage down to an hour and 40 minutes or so.

Heck just watching all the footage is a monumental task never mind deciding which super cool shots to cut out. By the time they get it down to 5 or so hours of footage all that's left is really good stuff. You know the last cut is the deepest.
Good Grief

Beaver/Rubio in the 15 are out with a broken a-arm.
Dirt flies when you're having fun!